The story of the fathead anthias begins in 1949 when a small, colorful fish was described by the Japanese ichthyologist Dr. M. Watanabe. This fish, which was collected off the island of Okinawa, was not only a new species but represented an undescribed genus. Watanabe gave it the name Serranocirrhitus latus (the genus name means “grouper-hawkfish”) and placed it in the family Cirrhitidae (the hawkfishes). Thirteen years later, the renowned ichthyologist Dr. G. Whitley described an apparently unknown anthias-like species from the Coral Sea. He named it Dactylanthias mcmichaeli. Whitley placed his “new” discovery in the family Serranidae and the subfamily Anthiinae. Although the color of Whitley’s species differed somewhat from that of S. latus, it turned out to be the same species. In 1978, Dr. J Randall and Dr P. Heemstra formally “moved” S. latus from the hawkfish family to the grouper family and concluded it was synonymous with D. mcmicheali. This completed the somewhat confusing taxonomic heritage of the fathead or hawkfish anthias.

In 1986, I had my first encounter with S. latus. This initial contact was not underwater, but in one of the holding tanks at Aquarium Fish Fiji. I was taken aback by the subtle beauty of this delicate looking fish and was thrilled to hear that Tony Nahacky, owner of this fish collecting operation, was regularly sending a few of these fish state side. The next day was even more exciting because I found the fathead anthias in its natural habitat. I was diving along a steep reef face near Beqa Island when I spotted a trio of these beauties in a small cave. 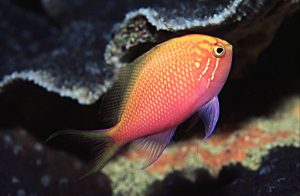 Unlike the majority of the Pseudanthias spp., which usually form sizable shoals and swim in the water column, the fathead anthias is often found swimming upside down along the roofs of overhangs, archways, and caves. I have also seen single, pairs, or trios of S. latus hovering out in the open on sheer drop-offs. They usually hang near crevices in which they quickly retreat if threatened. In Savu Savu, Fiji, it is found in association with stony corals, alcyonarians soft corals, and gorgonians. Other authors have reported observing this species in small too large groups associating with drop-off ledges and caves (Randall & Heemstra 1978). It is possible that this fish shoals in deeper water where it tends to be more abundant. In the Fijian Islands, I have seen this species at a depth range of 14 to 23 m (46 to 76 ft.), but it has been reported to occur on steep outer reef slopes down to 70 m (231 ft.) (Myers 1999). As far as its geographical range is concerned, it is known from the Moluccan Islands east to the Fijian Islands, north as far as the Izu Islands of Japan and south to New Caledonia and the Great Barrier Reef (Myers 1999).

So what are the secrets to keeping the fathead anthias? One of the most important requirements is that you provide this fish with plenty of hiding places. Use your ingenuity to construct a cave or overhang that your fathead can hangout in or under. If they feel secure, they will be more likely to spend time in the open. Because they seem to prefer the subdued light levels found in these microhabitats, a dimly-lit tank may help them to more quickly overcome their initial timidity. However, I should point out that it is possible to keep them in more brightly-lit aquariums.

Do not be surprised if your newly introduced S. latus does not venture out from its preferred hiding place when there is activity around the aquarium. It often takes a while before this fish overcomes its initial shyness. One individual I kept would not come out of hiding if I was near the aquarium. When I fed it, I would have to move away from the aquarium and watch its behavior from a distance. Otherwise, it would not come out to feed. However, in time (over one month) it became more brazen and would come out to feed as soon as food was added.

This acclimation process may be accelerated if the tank includes some dither fish. “What the heck is a dither fish?” you might ask? They are bold fish species that normally swim about the aquarium (they often spend a lot of time in midwater). By staying in the open, the dither fish serve to draw more reclusive species out of hiding as their presence reassures their timid tankmates that it is safe to venture out. Some good dither fish include certain bolder anthias species (e.g., Bartlett’s anthias, Pseudanthias bartlettorum ), the schooling chromis species ( Chromis spp.), flasher wrasses ( Paracheilinus spp.), some fairy wrasses ( Cirrhilabrus ), and dartfishes ( Ptereleotris spp.). Note – some of these fishes (e.g., flasher wrasses, dartfishes) may take a while to adjust to aquarium life as well, but once they do, they often spend time in the water column and will serve as effective dither fishes. 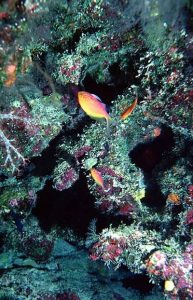 Fathead anthias acclimation will also be impacted by its tankmates. You will have much better success keeping S. latus with passive fishes, like assessors ( Assessor spp.), comets ( Calloplesiops spp.), reef basslets ( Liopropoma spp.), cardinalfishes, gobies, dartfishes, and dragonets. Avoid keeping them with groupers, most dottybacks, larger hawkfishes, aggressive angelfishes, large sand perches, belligerent surgeonfishes, triggerfishes or any other fish that has a reputation for being aggressive. Be aware that the more belligerent anthias, like the lyretail ( Pseudanthias squamipinnis ), twinspot ( P. bimaculatus ), and redbelted anthias ( P. rubrizonatus ) may also pester their mild-mannered cousin. That said, I have seen healthy S. latus in aquariums that contained a wide-array of fish tankmates, including known “thugs” (e.g., large damsels, aggressive angelfishes, surgeonfishes). But in these cases, the fatheads were acclimated to the aquarium before their more belligerent “neighbors,” and the tanks were very large (300 gallons and above).

You can keep more than one fathead anthias in the same tank. Males are more likely to quarrel among themselves, while females tend to be less aggressive. Therefore, you should try and acquire a male-female pair, two females, or a male and two females. Unfortunately, there are no known color differences between the sexes. To increase the chances of acquiring a pair, purchase individuals that differ significantly in size. Like other anthias, this species is a protogynous hermaphrodite (i.e., some females change into males). On average, male fathead anthias tend to be larger than females. If you want to keep a trio, try and acquire one larger individual and two smaller S. latus. In my observations of pairs and trios in the wild, one individual (presumably the male) was always larger than the other(s). You can reduce the likelihood of intraspecific aggression if you give your pair or trio of fatheads plenty of room to spread out (i.e., a larger tank).”

I have found that if given a peaceful, quiet environment that most fathead anthias will begin feeding soon after introduction to their new home. I have had good luck using live brine, frozen mysid shrimp, and frozen preparations for carnivores as first foods. Make sure you vary the diet and include foods that will help maintain their lovely colors (e.g., prepared frozen foods, color enhancing flake foods). Because these anthias feed on zooplankton, it is important to feed them frequently. I would suggest you feed them at least twice a day. 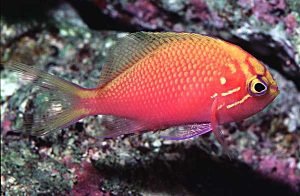 Serranocirrhitus latus is ideally suited to the reef aquarium. They will not bother your invertebrates and typically do better in a reef tank because of all the nooks and crannies present that they can refuge in. As noted above, they may acclimate more readily to the deepwater reef tank (i.e., a tank with less intense illumination), rather than a reef aquarium that replicates a shallow water habitat. I have seen healthy individuals in the latter venue; however, they did seem to spend more time in or near crevices and under ledges.

It is not uncommon to find a fathead anthias that is suffering from decompression related maladies. According to fish collector Tony Nahacky, the swim bladder of this fish can be difficult to purge of excess gas when the fish is being brought to the surface. Individuals harmed in this way usually do not make it all the way to the retail store (they die at the collectors or during shipping). A fathead with a damaged swim bladder will often perch between rocks rather than hover in the water column. When it swims, the head will be angled slightly downward (i.e., the tail is held above the midbody axis) and it will have difficulty maintaining its position in the water column.

In conclusion, although abundant in certain parts of its range, the fathead anthias is by no means common in the ornamental marine fish market. If you do have access to one or more of these beauties, and have a peaceful community tank in which to keep it, I would highly recommend S. latus for the more experienced fish-keeper. Happy fish-watching!