Imagine you’re a male seahorse clinging to a strand of algae, swaying rhythmically in the current. Zooplankton drifts by and you snap it up in your narrow mouth. There are several female seahorses nearby for you to court. Also, there are a few males, who are the competition. But the males are mostly peripheral to your territory and of little or no concern. Overall you are content. Everything you require either drifts to you or is in short swimming distance from you. Your world is small but complete. Until one day, to your consternation, you are collected by a marine biologist and set up in a laboratory tank, far away. Your world is suddenly much smaller and very different. Your tank mates now include a single female and several males, all from your species. The males set about bullying you, because you are the now in direct competition for the female’s attention. 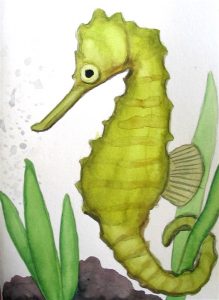 You continue your existence as a male seahorse inside a lab tank, which is a drastic change of environment from your wild “stomping grounds.” Your new captive environment elicits behavioral changes in you and your tank mates, the other seahorses. Yet you are all still the same animals, from the same species. And neither you nor your fellow seahorses have been genetically altered in any way. It’s just that the new environmental conditions require different behavioral responses. Although you still have access to a “hitching post,” food, and a female, your territory is cramped and too close for comfort to the other males who are competing for the same resources. Your whole world is now in miniature and the neighbors are encroaching upon your “yard,” or you are encroaching upon theirs. Either way the cramped living conditions lead to some conflict. Whether it is mortal combat is determined by the degree of environmental change and how genetically prone you are to defending your space. It is the combination and the interaction of the two factors, environment and genetics, which makes you, the seahorse, who you are.

You may be a member of unique species of seahorse, with genes in common with your conspecifics, but within your species you are a unique individual with your own DNA, similar overall, but dissimilar. (In a given species individuals possess enough of a genetic difference to create a range of characteristics and behaviors. For example, in the extremes one individual fish from a population may be the most aggressive while another is the least aggressive, with the rest of the population falling somewhere in between on the scale.) But it’s not only you who are unique, so is the environment in which you live, the aquarium. Not just physically but genetically. All your other seahorse tank mates are genetically unique. So, no other aquarium environment exactly matches yours.

A captive seahorse’s perspective helps us to better appreciate the uniqueness of aquarium setups. Each aquarium is a unique environment, housing genetically unique individuals, arranged in a unique configuration, at least to a certain degree. Biological traits or behavioral characteristics often follow a bell curve, from the least to the most. In a population, the difference between individuals is subtle, continuing along a grade; for example, from the most aggressive to the least aggressive. The grade may manifest itself by beginning with ‘indifference’ followed by ‘mild chasing’ then ‘blatant aggression’, and ending with ‘outright killing’. (Researchers have determined that in some species of schooling fish the position of individual fish in the school is influenced by fear levels, the most fearful keeping to the inside the school.) The average behavior for a species determines the shape of the curve. (See Different Bell Curve Diagrams: Different species, more aggressive,
less aggressive, different shaped curves). But although we might confidently generalize a single species’ behavior, we are dealing with uncertainty when species are combined. Published compatibility charts are built on experimentation and experience, but in reality they are only guidelines. Our own observations are key. Several points we should keep in mind when attempting to minimize fish aggression include – size, sex ratio, color, shape, food, territory, and population density. For simplicity’s sake, I will sort them into two basic categories: territory and food. The categories sometimes overlap, and they are both altered by the factor of time. 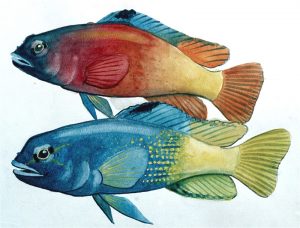 Consider the allocation of space in the average reef aquarium, and the possible areas where conflict can occur between fish. Reef walls create nooks, crannies, caves, passageways, crevices, and perches. In addition, a deep sand bed below the rock offer space for burrowing fish species. But territoriality is relative. One fish may defend a small cave, while another may lay claim to the entire tank’s swimming space. But we must remember that it is the layout of the space together with the genetic proclivities of the fish that determine whether or not conflict is inevitable. Each individual fish is a unique genetic package. And as aquarists we assume a degree of uncertainty when we introduce a new inhabitant to our aquarium.

However, we can expect a newly introduced fish to “follow” the general “specifications” and behavioral characteristics of the species to which it belongs. But what the possible behaviors are going to be under all circumstances is the million-dollar question. The previous story of the captive seahorse reminds us of that. The fact is that captive and wild behavior can differ greatly. The limits of an aquarium environment and the potential interactions with tank-mates can alter how a fish “should” behave. The number of environmental variables involved combined with the flexibility of chemical responses (genetically determined) allows for deviation in fish behavior. We can expect common aggressive reactions between two fish species to occur, like a Purple Dottyback reacting negatively to a fish of a similar size and color. But what effect does the presence of a third fish species have to the mix? Will it nullify or amplify the conflict, or will it simply have no effect at all? Will
a juvenile species be more aggressive and territorial when it matures or will it relax its guard? The famous paleontologist George Gaylord Simpson wrote “… [T]he development of the individual is affected not only by the inherited growth determinants but also by the conditions under which growth occurs.” (Simpson). 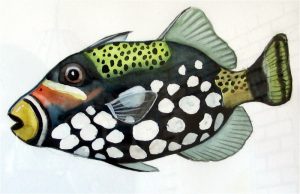 So, no one can answer these questions with certainty? In an aquarium the interactions between multiple species is as complex as a wild ecosystem. Finally, we must realize that animals change their ecosystem simply by being present and living in it. My very first marine tank, which I got when I was twelve, contained two Blue Yellow-Tail Damsels, both of which expended time and effort excavating the sandy bottom with their tails, to the point of creating a cave under a large rock. I repeatedly pushed the sand back, but they always rebuilt. Thus the two Damsels not only affected their world, but mine as well. I hated seeing the bare patch of tank bottom showing, and my aggression was slightly stirred by their behavior.

Consider the ubiquitous Yellow Tang (Zebrasoma flavescens). As an herbivorous schooling species it patrols an aquarium searching for algae. (Herbivores generally must eat meals more often than carnivores because plant material is harder to digest than animal flesh. Consequently, herbivorous species like the Yellow Tang possess longer intestinal tracts than carnivores, and they exhibit greater territorial behavior to protect their food resources.) Therefore, a conspecific, if present, is the most immediate threat. Two individuals of the same species, which are of a similar size and “disposition,” are likely to intimidate one another until a hierarchy is established. Competition for the same resources leads to conflict both in the wild and in the aquarium.

Because space is inherently limited in an aquarium, territorial conflict is a common problem. Fish like gobies, blennies, clownfish roam, but center activities around a prime location such as a pit or a cave, defending a small circumference of territory. Conversely, a fish like a puffer that requires greater space may claim the entire tank as its territory, attacking meeker fish or chasing them into hiding. I remember seeing aerial news footage of a shark swimming through a school of small fish. The small fish kept their distance equally on all sides of the shark, creating an almost perfect oval around the shark, like an invisible shield. Fish require their space, and they will create it if necessary by altering their surroundings, through modification of the physical environment or by intimidating or killing their tank-mates. As aquarists we have to utilize an aquarium’s space as conservatively as possible, simulating the wild reef while balance our esthetic desires with the
requirements of the fish.