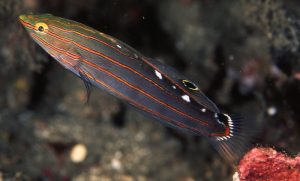 Rainford’s goby is a colorful addition to the reef aquarium, but will do best if some filamentous algae is present in the aquarium.

The genus Amblygobius is comprised of 14 species that are distributed in the Indo-Pacific. Two of these gobies are encountered in the aquarium trade with a great degree of regularity, while at least four others show-up occasionally. Unlike many gobies, the Amblygobius spp. spend most of their time hovering in the water column, not in repose on the substrate. Most species are also omnivorous, feeding on algae as well as tiny invertebrates. There are some that acquire these invertebrates by taking in mouthfuls of substrate and sifting it through their gill rakers. Rather than
examining the husbandry of the genus as a whole, I think it would be more valuable to look at the two most common aquarium species in detail.

Rainford’s goby is greenish brown overall with orange lines and has become a staple in the marine fish trade since about 1990. Its availability in the hobby corresponds with the increased popularity of reef aquariums. Although this fish will not harm sessile invertebrates, and is thus a suitable addition to the reef aquarium, it really does best if kept in a tank with filamentous algae (something most reef aquarists abhor). If the tank does not support an algal crop, it will often become emaciated. If the aquarist is persistent, it is possible to get these fish to accept introduced fare, like vitamin-enriched live and frozen brine shrimp, mysid shrimp, and prepared foods for herbivores. But, as I keep more A. rainfordi I have come to the conclusion that green and/or red filamentous algae is almost essential to keep most individuals.

With the exception of closely related species, A. rainfordi is rarely aggressively toward fish tankmates. I have kept it with other Amblygobius spp. with varying degrees of success. If housed with larger forms, it is likely to be picked on if the tank is small. It may fight with the similarly-shaped Hector’s goby (Amblygobius hectori). 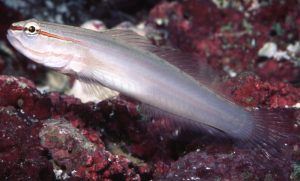 The nocturn goby is likely to dig holes and burrow under rock work. It is less common in the hobby than some of its congeners.

Juvenile Rainford’s gobies can be kept together in medium-sized tank if introduced together, but adults often quarrel. Therefore, it is best to keep one per tank. Just because you purchase a “mated pair” of A. rainfordi, it does not mean that they will get along. For example, I acquired a supposed mated pair of Rainford’s gobies that were happy together when initially introduced, but after several days one of the animals disappeared. This individual reappeared after about four days, only to be picked on incessantly by its supposed “mate.” The more dominant fish displayed at, chase and darted at and rammed the slightly smaller conspecific every time they came into close proximity to one another. The subordinate rarely sifted the substrate while the more aggressive fish, fed more frequently. The subordinate fish lost weight, began exhibiting a curved back, sunken dorsal musculature (a sign of malnutrition) and finally perished. I should point out, that in the wild, this fish usually occurs singly, not in pairs.

Rainford’s goby should be kept with peaceful species. Avoid housing it with fishes that are prone to picking on small, substrate-bound fishes, like dottybacks, hawkfishes and sand perches. Amblygobius rainfordi attains a maximum length of 2.6 inches and can be housed in very small tanks. All of the members of this genus will jump out of open aquariums if they are harassed by aggressive tankmates or if startled when the lights are turned off. 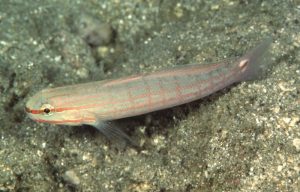 The crosshatch goby is a sand sifter that will take small mouthfuls of substrate and filter it through its gill rakers. It feeds mainly on small crustaceans and some algae.

The Rainford’s goby is similar to several other species that occasionally make it into the aquarium trade. These are: the crosshatch goby (Amblygobius decussatus), Hector’s goby (A. hectori), and the nocturn goby (A. nocturnus). The husbandry of these species is quite similar to that of A. rainfordi. The nocturn goby is more likely to dig burrows under rock work, while the crosshatch goby seems to be less dependent on algae to survive and may also be more likely to tolerate the presence of conspecifics.

This is a larger member of the genus, attaining a maximum length of around 6 inches. It can be employed in a utility role in the reef aquarium as it will help keep the upper layers of live sand stirred by taking mouthfuls and then expelling it through its gills. It is a more vigorous substrate-sifter than the Rainford’s goby. It spends more time engaged in this behavior and also, in part because it is larger, penetrates deeper into the sand bed. However, it is not as likely to disturb the deeper sections of sand beds like the sleeper gobies (Valenciennea spp.). 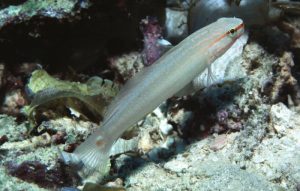 The crosshatch goby can vary somewhat in color, depending on its surroundings (e.g., substrate hue).

This species tends to be hardier than A. rainfordi. While a filamentous algae crop will greatly facilitate the husbandry of the Rainford’s goby, it is less important element in A. phalaena care (although, the latter does feed heavily on algae in the wild). It can be fed vitamin-enriched live and frozen brine shrimp and mysid shrimp, as well as prepared foods for herbivores. If placed in a tank without filamentous algae, live sand, or live rock, feed at least twice a day, but if natural foods are present, you can feed it less frequently. Keep an eye on its weight to determine if you should feed more.

Although not usually considered to be a threat to sessile invertebrates, I had one A. phalaena that would pull zoanthids off of a rock, chew on them and then spit them out! It is a predator on flatworms that can become a real pest in a reef aquarium.

The brownbarred goby is rarely quarrelsome with heterospecifics, but they will fight with each other. When quarreling, they will erect their fins, rub their ventral surfaces together, and ram each other with their open mouths. Because of their propensity to fight, it is best to keep it singly — that is, unless you can acquire a male-female pair. Achterkamp (1991) suggests that males have spots on the tail, while females lack them, however, more study is required to confirm this observation. Spawning may occur in captivity (Achterkamp 1991, Delbeek and Michael 1993). When they are ready to spawn, the pair will dig a burrow that will serve as their nest. In most cases spawning occurs at night. The male defends the dirty-yellow clump of eggs, driving off the female and chasing potential egg predators from the nest site. The eggs hatch in about 6 days. Spawning can occur as frequently as several times a month, but some pairs may spawn much less frequently than that. 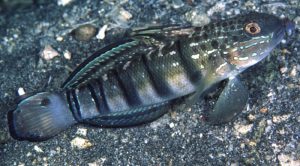 The brownbarred goby is regularly encountered by aquarists and is a fairly durable aquarium species.

Do not keep the brownbarred goby with overly aggressive fishes that stay on or near the substrate. However, if the tank is large enough, this fish will often be ignored by its tankmates. The brownbarred goby is very similar to the tailspot goby (Amblygobius albimaculatus) and Sphynx goby (A. sphynx). The captive care requirements of these species are very similar to that of A. phalaena. These three species are likely to quarrel with one another if they are kept together.

I hope this introduction to the more common members of the genus Amblygobius will help you in selecting a species that is best for your aquarium venue. Although they have some special husbandry needs (e.g., filamentous algae), they can provide the dedicated aquarist with years of enjoyment. Until next time, happy fish-watching! 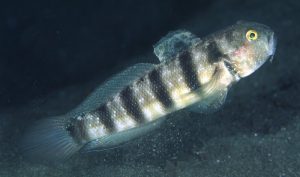 The darker color phase of the brownbarred goby. This species also “appreciates” some plant material in its diet.