Aquarium Fish: In Praise of the ‘Beauty’

The Centropyge genus of Dwarf Angels is one of the most popular in the marine aquarium hobby; it includes such stunners as the Flame Angel (C. loriculus), the Bicolor (C. bicolor) and the Lemonpeel (C. flavissima). The genus also includes some rare species such as the Rusty (C. ferrugata), the Blue Mauritius (C. debelius) and the Cocos Pygmy Angelfish (C. joculator).

Of all the thirty odd species, the Coral Beauty (C. bispinosa) continues to be a main stay in the trade and very popular with reef keepers and fish only fans alike.

The Coral Beauty is a drop dead gorgeous fish. It retains its colouration as it matures, not losing it in exchange for a drab look in adulthood as some Pomacanthids do. Though shy on occasion it is generally out and about on the reef and in the aquarium, under today’s modern lighting units, with a goodly amount of blue in the spectrum, the electric blue rim to its fins really packs a punch. 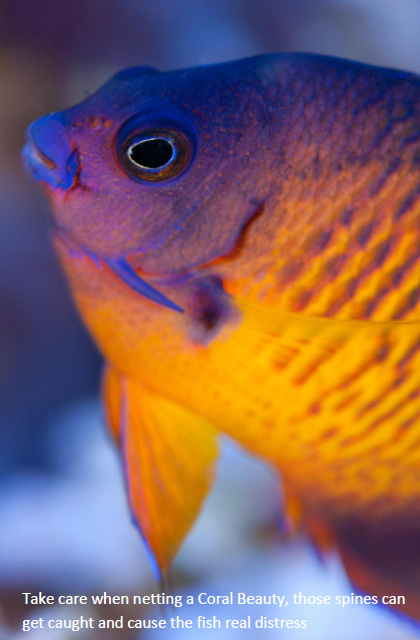 The Coral Beauty was first described in 1860 by the German born zoologist Albert Günther and given the name bispinosa after the two prominent spines just forward of the fishes’ gill cover. Indeed ‘Two-spined Angelfish’ is a common name for the species as is ‘Dusky Angelfish’. It’s worth noting that you will also see C.bispinosus listed as the binomial for the species.

The Coral Beauty is a widespread species found throughout the Indo-West Pacific, from East Africa through the Central Pacific Ocean and across Indonesia. Most aquarium specimens are sourced from Fiji.

Specimens have been found on a variety of habitats from shallow rocky areas across reefs down to over forty metres, though the fish is most commonly found in relatively shallow waters of fifteen metres or less, where algae can be found.

Because of its large geographic range a number of morphs and variations have been noted. In some cases the orange colour is lost and the fish is almost entirely blue, in others the reverse is true and orange predominates. Not unsurprisingly these morphs attract a higher price. Though one author notes that the colours on some variants revert to normal when kept in aquaria, suggesting these are adaptations to specific conditions such as depth. This is borne out by the correlation noted by several writers that paler examples are generally caught at greater depths.

The Dwarf Angels have something of a reputation; the Lemonpeel is a troublesome coral nipper, the Bicolor and Golden (C. aurantius) can be difficult to adapt to aquarium life and species such as C. heraldi and C. woodheadi can in some cases take to the aquarium, like…the proverbial to water. Whilst other specimens refuse all proffered foods and succumb to starvation or disease. 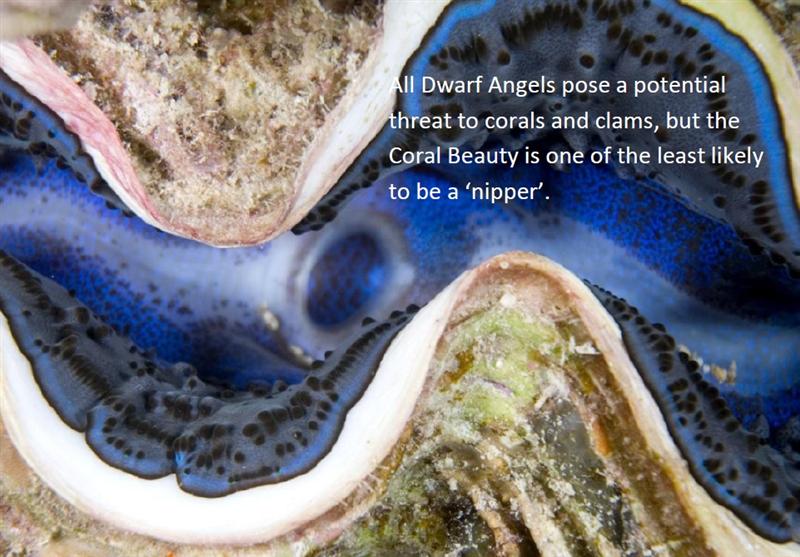 Not the Coral Beauty though, these fish are durable, accept most food stuffs offered and are one of the safer fish to introduce to your prize collection of corals. Having said that though, fishes are individuals and some may still be nippers, Tridacnid Clam mantles and some LPS corals may just be too tempting. Larger tanks and regular feeding will further aid in limiting this anti social behaviour.

Coral Beauties reach a maximum size of around ten centimetres, so this and their generally peaceful dispositions make them a good prospect for most tanks over 150 litres or so. Try to create an open aquascape with rockwork with plenty of holes and openings so the fish can venture into the reef structure as they do in the wild. These are not fish of open water picking out plankton in the current like Anthias, they enjoy hugging the rockwork looking out for choice morsels of food.

Coral beauties are quite tolerant of most tank mates, though can be territorial, especially with fish that occupy a similar ecological niche as they do. Tangs can be troublesome tank mates, though bickering usually settles down if the system is large enough and feeding is sufficient. My CB lives quite happily with a Yellow Tang and a Powder Blue Tang (Though those two often flash their fins at each other on passing!). As with all Dwarf Angels, keeping more than one in the same tank is best avoided unless you are lucky enough to have a very large system where the fish can easily avoid each other and can have their own territory, or you have a mated pair. Indeed unless you have a large system it is usually best to keep only one Dwarf Angel of any kind. 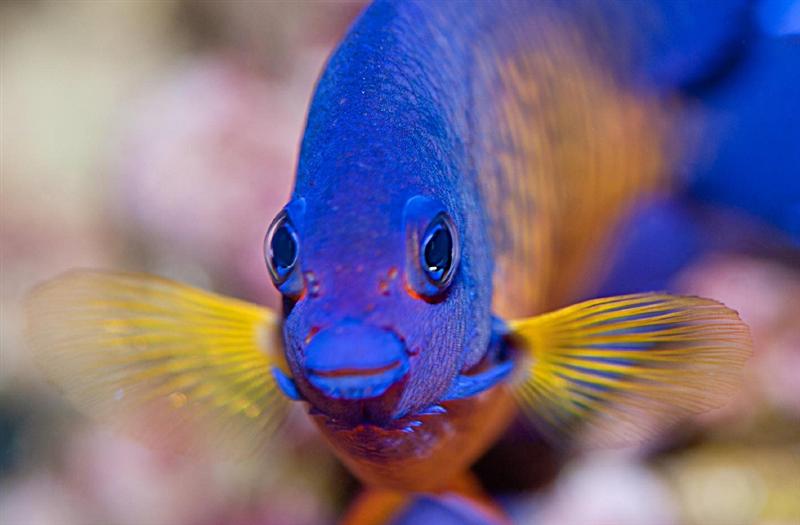 Feeding is very straightforward for Coral Beauties: in the wild the species grazes on algae and diatoms and will replicate this behaviour in the aquarium, often picking away at the rockwork and contributing to the overall maintenance of the tank. To augment this grazing, sheets of Nori should be offered along with a good flake or pellet food rich in algae products such as Spirulina, Frozen Mysis Shrimp are eagerly consumed as well. Avoid lettuce or other terrestrial greens as these are of poor nutritional value and not as high in protein or vitamins as Nori for example. Some companies, Ocean Nutrition for example, produce a food specifically formulated for Dwarf Angels.

Coral Beauties have been bred in captivity, but its a time consuming and complicated task – not something an average hobbyist is likely to achieve – replicating the harem group comprised of several individuals found in the wild, presents significant challenges for most aquarists. Nor is it always easy to determine sex in the Centropyge genus, though males may have longer fins according to some authors. 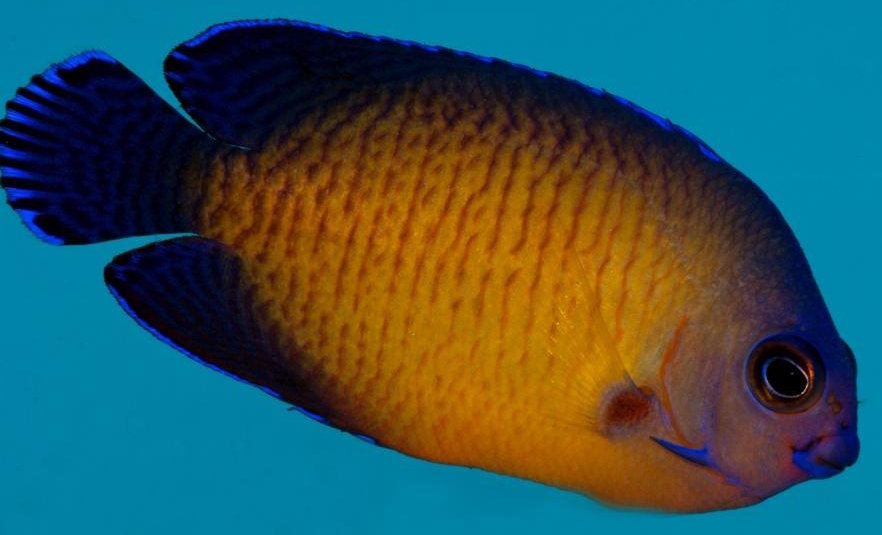 Whilst the Coral Beauty is available so easily and so readily from the wild it is unlikely at least in the short to medium term that captive raised individuals will find their way into our fish shops. It is the more high value and rarer species that are limited to smaller geographic areas such as C. joculator mentioned earlier. These fishes that command a much higher price are the subject of significant investment in this area, indeed many of the larger Angels (Pomacanthids and Holocanthids) are increasingly available as captive raised specimens –a trend that can only be welcomed by all who care about stocks in the wild.

The Coral Beauty deserves its reputation as one of the best and easiest to keep Dwarf Angels, it is so often seen as THE Dwarf Angel of choice, passed over perhaps only by the slightly more expensive Flame Angel. If you pick a Coral Beauty for your tank; chose a healthy one, make sure it’s nice and chubby, alert and eating well and from a reputable wholesaler. give it what it needs in terms of food and rockwork and it will reward you for many years to come.

Thanks to Living Reef in Oldham, Greater Manchester for letting me photograph several of the specimens shown in this article.