The wrasses comprise a large and diverse family of fishes. They are ubiquitous members of the coral reef community and include tiny species like the pinkstreaked wrasse ( Pseudocheilinops ataenia ) (it reaches a maximum length of about 6.5 cm [2.6 inches]) as well as the largest of the bony fishes, the humphead or Napoleon wrasse ( Cheilinus undulatus ) (it gets over 2 m [7 feet] long). 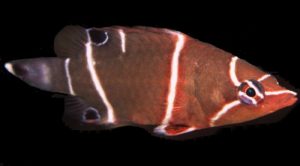 Possum wrasses, like this Wetmorella albofasciata, will “appreciate” caves and crevices in which they can skulk about.

In the last few years, several small secretive wrasses have been showing up in aquarium stores with greater frequency. These fishes are the superlative reef wrasses. They particularly “enjoy” the many reef interstices and caves present in the invertebrate aquarium, as well as the natural fodder that is typically associated with live substrate. Unlike some of their larger cousins, they are also no threat to ornamental invertebrates. The wrasses of which I speak are the three members of the genus Wetmorella. 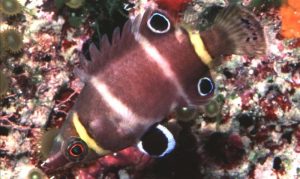 Relatively little is known about the biology of these wrasses. As mentioned above, all three species are quite secretive, spending their days moving within crevices and from hole to hole under overhangs and in caves. These habitats usually have fairly rich sessile invertebrate growth (e.g., sponges, soft corals, cup corals). One species ( Wetmorella triocellata ) has also been reported from rubble slopes. As darkness falls, they apparently secrete themselves in holes and crevices for the night. All three Wetmorella spp. tend to occur on reef drop-offs, usually at water depths in excess of 20 m (66 feet). They are some of the smallest of the wrasses, reaching maximum lengths of 5.0 to 6.5 cm (2.0 to 2.6 inches).

These labrids get around in a different manner than most of their kin. They seem to hover, float and skulk about more than others in the family. Adult Wetmorella wrasses are typically found in pairs or in groups. For example, the yellowbanded possum wrasse is usually found in small groups, while the whitebanded possum wrasse is usually seen in pairs. There is no data available on the food habits of these fishes. I assume that they eat small crustaceans, polychaetes worms and possibly foraminiferans (shelled protozoa) and tiny snails (e.g., prosobranch gastropods). (These assumptions are based on data available on the diets of similar sized, secretive wrasses.)

Because of their diminutive sizes, the possum wrasses can be kept in small to very large tanks. It is possible to keep a possum wrasse in a nano-reef tank, but you will need to feed them frequently as there will not be enough natural fodder in a small tank to sustain them (more on this later). They can be kept in a large reef aquarium as well, although you may not see them that frequently in a big tank with loads of live rock. 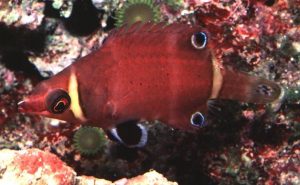 Although somewhat shy, the possum wrasses make a wonderful addition to the reef aquarium. This is an adult yellowbanded possum wrasse ( Wetmorella nigropinnata ).

The major Wetmorella drawback is that they are quite reclusive. They spend most of their time moving among the rock work. Occasionally you will see them peeking out of a crevice or a cave or they may dash out to grab a passing morsel (OK, maybe not dash as they do not swim that fast). While these wrasses are not likely to parade around the tank, they will become more bold once they have acclimated and if they are not picked on by piscine neighbors.

The possum wrasses are more likely to spend time in the open if kept in relatively quite surroundings. For example, I had a 90 gallon reef tank in my office that contained two members of the genus. After a fortnight, I started seeing them moving about in the open quite frequently, but usually only when most of the room lights were off and I was working quietly at my desk. The tank had a large overhang and several small caves. You would often see the Wetmorella spp. moving along the edge of the overhang roof. If there was movement in the room, these wrasses stayed among the catacombs of the reef structure. Unlike some wrasses, the Wetmorella spp. do not bury in the sand at night. They simply “hole up” in the reef.

There is a potential downside to the sudden appearance of these wrasses in the aquarium trade. There is a correlation between the sudden abundance of these labrids and a growing demand for a small serranid known as the Swalesi reef basslet (Liopropoma swalesi). This Liopropoma spp. is superficially similar to the candy basslet (L. carmabi), which is a very high dollar fish from the Atlantic. Both of these fishes are very cryptic, spending most of their time deep in reef crevices, caves and in rubble beds. Up until recently, a live photo of a L. swalesi had never even been published! That is how rare (or at least secretive) this fish is. 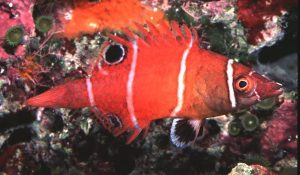 The pygmy possum wrasse ( Wetmorella triocellata ) is one of the more striking members in the genus.

Not only are they shy by nature, they are also potential targets of tank bullies. It is best to avoid keeping them with more pugnacious species that may pick on them or with fishes that will prevent them from getting enough to eat. That said, I have noticed that many fish simply ignore them. The 90 gallon community tank mentioned above included a fairly pugnacious redstriped pacific hogfish ( Bodianus spp.), a whitebarred wrasse ( Pseudocheilinus ocellatus ), a pinkstreaked wrasse ( Pseudocheilinops ataenia ) and several fairy wrasses ( Cirrhilabrus spp.). For the most part, the Wetmorella spp. did not elicit an aggressive response from their labrid tankmates. This may be due to their odd behavior, the small size, and somewhat divergent body shape of the possum wrasses. I did see the Bodianus nip at the eye spot on the anal fin of one possum wrasses on several occasions. I am not sure if the hogfish mistook the spot for a small prey item or if it was intentionally attacking the possum wrasse. In this fish community, it was obvious that the possum wrasses gave way to larger fishes and were at the bottom of the pecking order. I never saw them behave aggressively toward to other fishes in the tank including a pinkstreaked wrasse that was of similar size.

As I mentioned above, I kept two of these wrasses together in a large reef tank. I rarely observed aggression between these individuals in this captive venue. However, I have seen larger Wetmorella bother smaller conspecifics in smaller tanks. In one case, a large individuals continually harassed a smaller congener until the submissive fish spent all of its time cowering in the upper corner of the aquarium. Therefore, if you plan on keeping more than one individuals of the same species or even congeners in the same tank, make sure the tank is large enough (e.g., 70 gallons or larger) and that it is replete with places for them to hide. Small holes are fine, but they really seem to appreciate caves and ledges. When there are aggression problems, the largest Wetmorella in the tank is likely to be the bully, no matter what species it is.

These microcarnivores will feed on tiny worms and crustaceans that associate with live rock. They also readily take aquarium foods, like mysid shrimp, frozen preparations and flake food. My Wetmorella seemed to prefer Cyclopeze, which they picked out of the water column. Even though they will eat introduced fodder, I think it is still best to house them in a tank with live substrate because they are so reclusive (especially when first added to a tank) and prone to being dominated by tankmates. This will enable the possum wrasses to feed throughout the day on the minute prey living on the rock. A productive refugium can also be helpful to ensure that they get enough to eat.

Although they are not bullet proof, I have never had a Wetmorella succumb to a parasitic infection. I believe the most likely cause of death would be malnutrition resulting from infrequent feeding and a impoverished microinvertebrate population in their tank. They might also be intimidated, and thus not get enough to eat, if their tankmates are too boisterous at feeding time.

Another possum wrasse problem is shipping stress. Although I have not has that many of these fishes shipped to me at this point, I think they are prone to succumbing to shipping stress. I would suggest that you ship them in a larger shipping bag with plenty of water and make sure once they arrive they are acclimated and placed in a good quarantine tank as soon as possible. Make sure your quarantine tank has plenty of good hiding places and includes a few bits of live rock for them to pick at.

For those of you that are interested in smaller, more secretive fishes, I would highly recommend the possum wrasses. But make sure your tank meets the conditions necessary to successfully house one of these lovely little labrids. This includes a relatively passive fish community, lots of appropriate hiding places and live substrate. Until next time, happy fish-watching!