Given the time, effort, knowledge, and even money we spend, there are still those animals that we should consider not purchasing for our aquariums. Some fish will simply get too large, other fish will refuse to eat in captivity, and further yet some fish will eat but continue to lose weight until they die. Despite all of our best intentions, there are some extraordinarily beautiful fish which are best viewed with SCUBA gear rather than within our glass boxes. One such fish hails from the marine fish family Zanclidae, more commonly known as the Moorish Idol with the marine aquarium trade.

Originally believed to be a Butterflyfish, Linnaeus (1758) placed his new discovery the genus Chaetodon. With a quick glance it is easy to see how one could consider it a Butterflyfish, but under close observation such as one made by modern-day ichthyologists it should have warranted its very own genus at the very least. However, it was not only originally described to the wrong genus, but it was also given two species names. Linnaeus confused the juvenile stage and the adult stage as two separate species and thereby named the juvenile Chaetodon canescens while the adults were awarded Chaetodon cornutus. 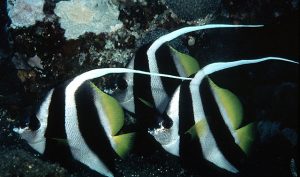 Although Cuvier (1832) never clarified the confusion created by Linnaeus naming two distinct species, he did recognize that the magnificent beauties were not from the genus Chaetodon. In fact, it isn’t even a butterfly, and therefore it was awarded a family all to its own – Zanclidae. Additionally, it was also assigned the generic name Zanclus. The confusion of which species name to officially recognize has yet to be discerned (Kuiter, Debelius, 2001), however it seems the majority of authors now use Z. cornutus exclusively. Without the desire to be rebellious, I, too, will utilize the same.

Perhaps the most distinctive feature of Moorish Idols is the extremely long dorsal fin. Created from the length of the 3rd spine, adults can often have a dorsal fin longer than their body length. The mouth is very small which consists of paired teeth with a slight inward curve. Finally, adults develop an eye spike which becomes larger in male Moorish Idols than equally aged females.

Moorish Idols are very widespread both geographically and in regards to the type of reef structure which they prefer. Individuals can be found on most tropical reefs from East Africa to Central America and Pacific waters around Mexico. Additionally, individuals have a tendency to spread into the warmer portions of subtropical waters. The extended pelagic period of the pre-juveniles undoubtedly is a large contributing factor to this vast distribution. So vast, in fact, that Zanclus cornutus has one of the largest geographical distributions of all marine fish.

If the vast distribution wasn’t enough, Moorish Idols also can be found within an expansive depth range. Snorkelers or even those individuals enjoying a glass-bottom boat ride will have the chance to witness Moorish Idols as they are regularly found in very shallow depths. Likewise, submarine observations have found Zanclus cornutus to depths of nearly 600 feet. Provided a hard substrate is available and food is plentiful, Moorish Idols are likely nearby.

Using their uniquely structured mouth, the Moorish Idol will probe into the crevices of the reef structure. The recurved teeth assist in the removal of the food from deep inside the rock. Rewarding their efforts is a stomach-full of invertebrates – primarily sponge. One hundred percent of the 30 specimens collected had sponge in their stomachs with an average quantity of roughly 86% of the total food contents. Obviously, sponge is a huge part of the diet. No doubt, algae and small micro-fauna are consumed during the feeding forays as well as 90% of the animals analyzed had algae in their stomachs accounting for merely 8% of the total food intake. No other foods held an appreciable percentage of intake, although many other foods were consumed. This is likely food that was taken in in conjunction with the sponge and algae (Hobson, 1974). 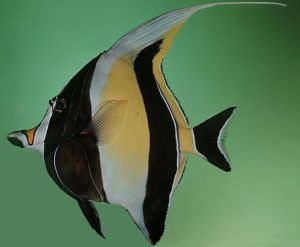 The extended pelagic stage has the juveniles settling to the bottom of the sea floor at an extremely large size, roughly 2 ½ – 2 ¾”. This is already 1/3 the adult size of the fish. As adults the fish will pair up into male-female pairs. Occasionally larger harems of 5 – 10 animals will group together. Less common are large schools numbering over 100 individual roving idols. The adults will spawn in pairs, releasing the gametes into the open water to begin the next extended pelagic period.

In the Home Aquarium

As was indicated in the introduction, Moorish Idols are very difficult to maintain long term in the home aquarium. Adult individuals will, more often than not, never begin to feed and eventually death by starvation ensues. Juveniles tend to have a better track record at accepting prepared aquarium foods, but many of the times the food is insufficient in either nutritional requirements or quantity, and again the fish dies of starvation. Rare are the situations when the fish adapts well and thrives in a home aquarium.

Note: While many of the fish listed are good tank mates for Zanclus coranutus, you should research each fish individually before adding it to your aquarium. Some of the mentioned fish are better left in the ocean or for advanced aquarists. 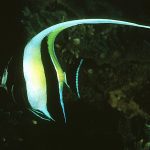 The first step to success begins with acquiring a healthy individual. All too often fish arrive with damaged mouths. The delicate design of the snout and mouth make shipping damage an unfortunate but regular evil. Careful inspection pf the mouth should reveal zero damage on any planned purchase. Likewise, the stomach should not have a hint of being thin. A pinched stomach is almost certainlythe sign of a fish which will not survive long term – avoid these fish. Naturally an overall and thorough inspection of the body and fins should be conducted. Frayed or torn fins, scrapes along the body, or any discoloration are definite warning signs for an unhealthy Moorish Idol. Finally, do not purchase a Moorish Idol which refuses aquarium fare in the dealer’s aquarium. 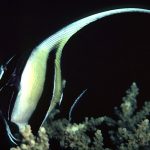 Obviously getting Zanclus cornutus to thrive in the aquarium hinges upon getting the fish to begin eating. The ideal food at getting finicky fish eating has always been live foods and that remains true in this instance as well. Live adult brine shrimp which have been gut-loaded for added nutrition seems to consistently be hard to resist for most fish. Even still this not the best food option. A diet rich in sponge must be obtained before success will be realized. A good prepared food to get the fish accustomed to consuming would be the frozen Formula foods. After thawing the food cube in a cup of tank water, press and/or affix the cube into crevices in the rockwork. The idea is the fish will rummage the rockwork much like it does in the wild and thus will locate the food and consume it. Over time it will become adapted to this feeding ritual and will immediately begin to feed after placement of the food. However, because of the pickiness of the feeding tendencies of
the fish no single food or feeding method should be relied upon. Getting the fish to eat and adapting to any feeding method is very beneficial, and once this has been established the aquarist should work towards the ideal situations. Having a well established aquarium filled with aged live rock will allow an adjustment period to take place as the fish will glean nutrition from finding sponge and tube worms on this live rock. Obviously, however, this supply of food cannot be sustained forever, therefore making the transition to prepared foods of paramount importance.

Speaking of live rock, the suitable aquarium will contain a large supply of rockwork which hopefully will have a plethora of established and flourishing sponge, macro and micro algae, and other various invertebrates. The rock should be arranged in such a manner that it provides bolt holes and hiding places, and yet still has a vast amount of open water. Moorish Idols are open water swimmers, but in the confines of a home aquarium they will appreciate being able to disappear into the back of the aquarium and out of sight. Due to the diet of Moorish Idols I cannot recommend aquariums which contain only fake or dead coral aquarium decorations.

The aquarium size should be as large as possible. Moorish Idols roam great distances in the wild and placing one into a cramped aquarium will likely be enough stress to dictate a poor transition into the home aquarium. For a single adult Zanclus cornutus I believe a 48” long aquarium is the absolute minimum starting length while an aquarium measuring 60” in total length would be the better option. Of course if other large or free-swimming fish are planned the aquarium size would need to be adjusted accordingly.

Other aquarium inhabitants should be chosen carefully. Many corals will be ignored, but non-stinging invertebrates certainly have the likelihood of getting taste-tested and possibly consumed. Feather dusters, both large and small alike, are prime examples of invertebrates which will be threatened. Although corals with potent nematocysts are generally avoided, I hesitate to declare them as being safe. If starvation begins to set in upon the Moorish Idol there is no telling what will become sampled as food. Mobile invertebrates such as snails and hermit crabs are not at risk of being consumed.

Vertebrate inhabitants should be smaller and non-threatening, especially if they are already present in an aquarium prior to the addition of the Moorish Idol. A scared or threatened Moorish Idol is certainly not going to begin to feed. Larger wrasses, Surgeonfish, and Butterflyfish should be avoided, if not entirely at least until after the Moorish Idol has settled into the aquarium and began to regularly feed. Smaller dither fish will encourage the Moorish Idol to be more outgoing, but even that is no guarantee of a successful acclimation.

Many people refer to Moorish Idols as being an option for only the most seasoned aquarists. I cannot be in total agreement with this sentiment only because I believe success keeping this fish in captivity is as much luck as it is skill. Rare are the days when the skill level of the aquarists accounts for a new arrival beginning to feed immediately. Rather than wonder if you have enough experience to tackle such an endeavor, I think you should discern you level of luck. Hobbyists which acquire a healthy and thriving Moorish Idol are not the norm and the odds of doing so are not in the corner of any reef keeper.