Aquarium Fish: Sharing a small house without conflicts: the pistol shrimp and the shrimpgoby’s life

Few examples of symbiosis in the whole natural world show such a wonderful balance between giving and receiving like the mutual relationship existing between Shrimp-Gobies and their fellows Alpheid Shrimps. 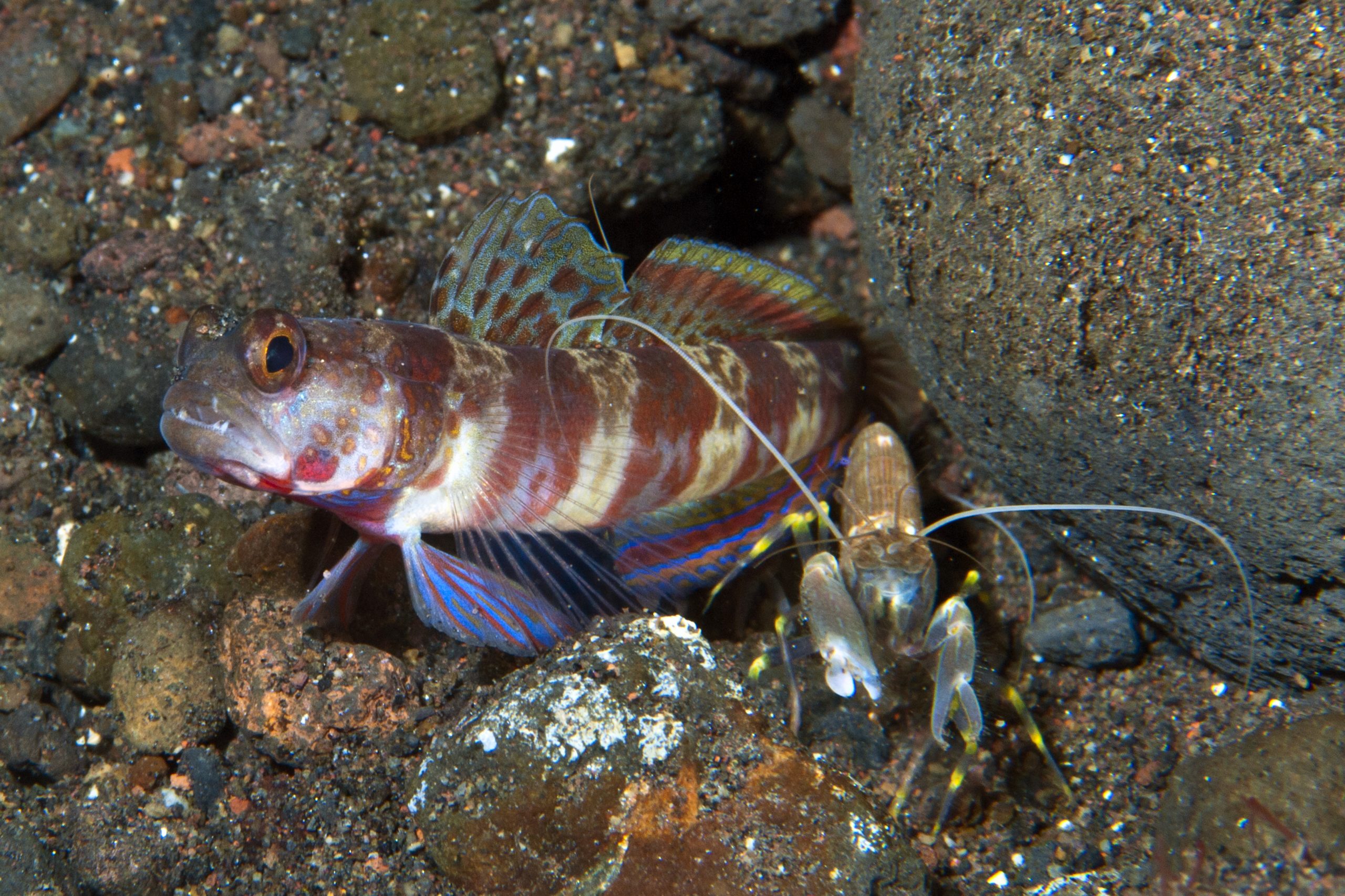 Shrimp-Gobies are little fish widespread along tropical and sub-tropical seas worldwide, especially in sandy or rubble areas, where they share their ‘house’ (a burrow) with small prawns, commonly called snapping-shrimps.

It is quite common to observe these gobies watching the burrow entrance, in strict physical contact with the shrimp’s antenna, while he approaches the surface to eliminate the material excavated from the burrow. Shrimp’s eyes, used to the burrow’s darkness, are almost blind out of the hole and the he could be a too-easy prey without the protection and the continuous surveillance of the goby. On the other hand, the goby is not able to dig a hole by itself, and if a burrow not well maintained would collapse in a very short time. When a danger approaches, the goby first signals it to the shrimp by flippering the caudal fin. If the danger gets worst, the goby turns rapidly escaping inside the burrow. 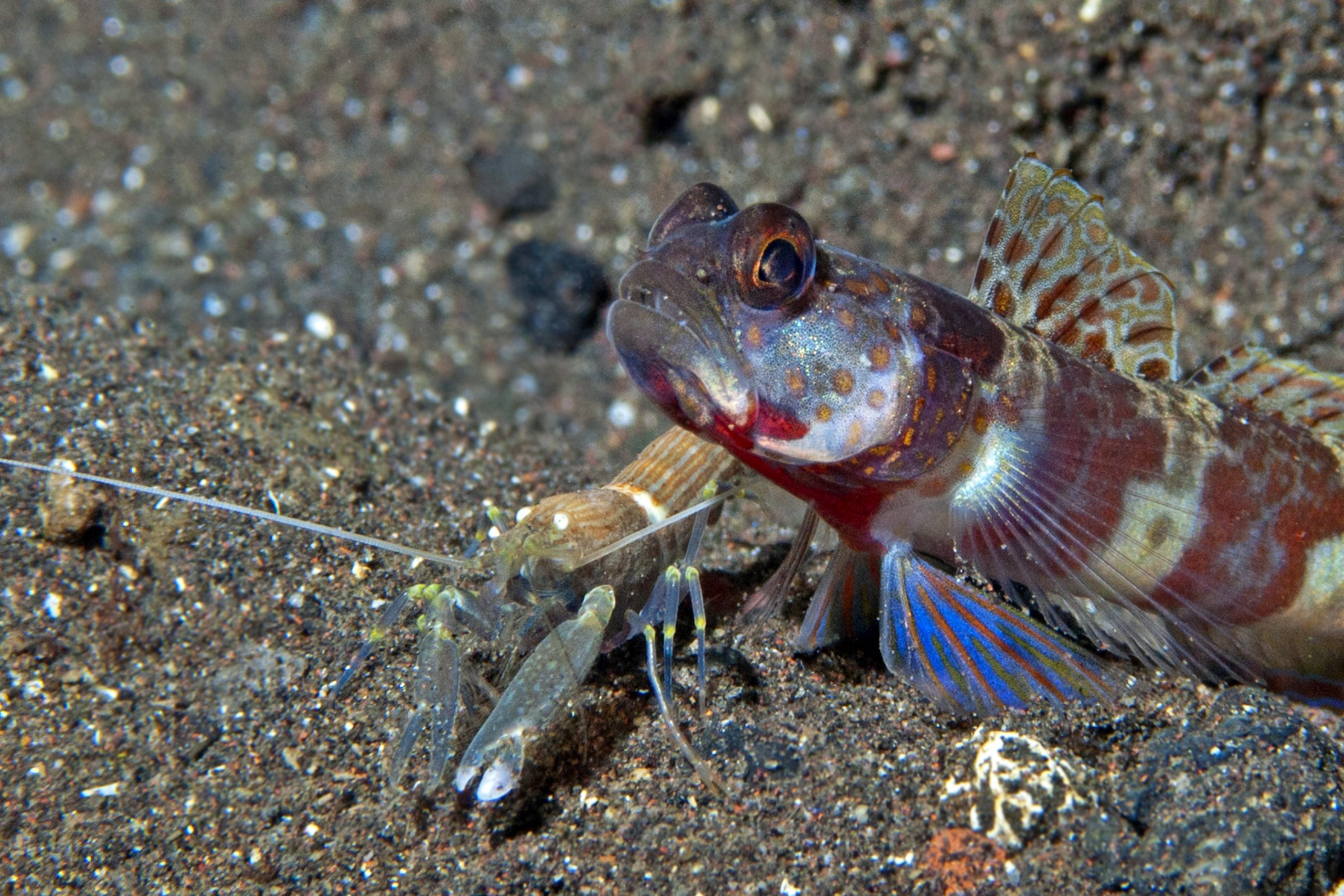 Fig. 1-1b: The Broad-Banded Shrimp-Goby Amblyeleotris periophthalma is quite common in some areas of Tropical Indo-Pacific. He likes muddy or sandy lagoons or shallow reefs, and he’s easily distinguishable by the large brown bands along the body and the red spot below the head. He can live with different species of Shrimps, in this case he share his burrow with Alpheus ochrostriatus.

It has been quite a debate if we should consider the goby just like a “watchman” for the shrimp, or on the contrary the shrimp is barely a housekeeper for the goby. The truth is that both of them have built a very complex and stable relationship, where right and duties of the pair are well established and balanced: even if sometimes it’s possible to observe a shrimp without his goby (or vice versa, that’s it is called “facultative association”, at least in some species), it’s normally a temporary situation. The couple pairing is necessary for the survival of both, as life is hard alone. Natural enemies like Lizardfish, Jackfish, Sandperches and some other predators like snake eels have been observed sometimes successfully hunting Shrimp-Gobies.

It’s a chicken-and-egg debate if is the goby first to find the shrimp, or the shrimp that finds the goby: the only sure thing is that they use different methods. Apparently gobies find their partners mainly using their visual ability, while chemical signals seem to have a prevalent role from the shrimp’s point of view: it seems reasonable considering the poor visual ability of the little crustacean. This relationship can begin shortly after the goby settles from planktonic life, when the little fish is almost 1 cm long. When the sexual maturity is reached, normally a pair male-female of gobies shares the same burrow together with a pair of shrimps. 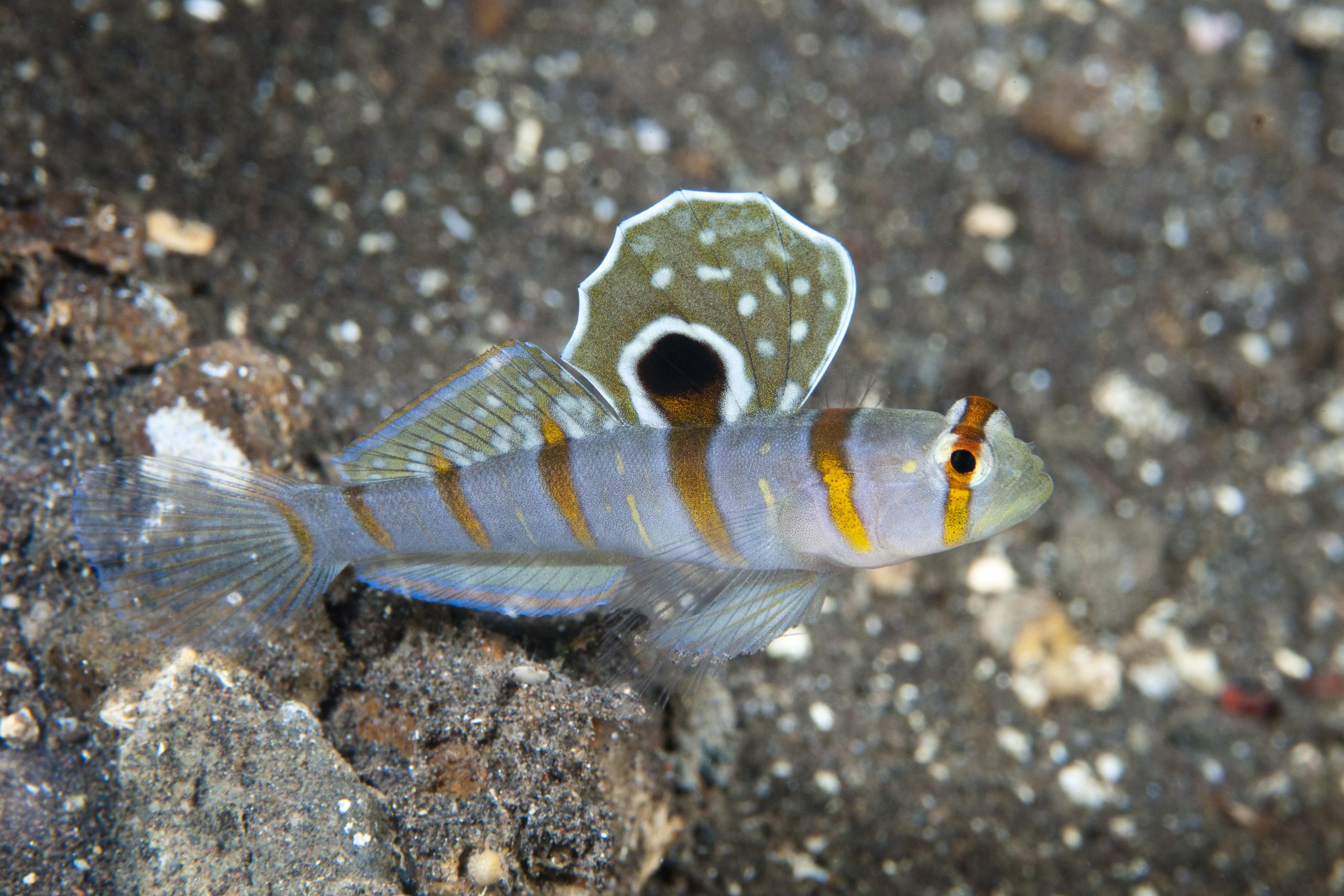 Fig. 2: A Gold-barred Shrimp Goby Amblyeleotris randalli displays his wonderful dorsal fin and eyespot. This feature can make a predator thinking that the fish is bigger of how he really is.

When the pair it’s formed, the process of building the burrow starts and, depending on the substrate and on the species of shrimp, could be short and branching, or long and deep, as it has been observed sometimes in some aquariums where the shrimp decided to build his house nearby to the glass.

The activity of the pair during the day is quite intense: the shrimp keep removing material from the burrow, enlarging the house and looking for food. The goby, aside from his watchman duties, is busy in catching his food (mainly zooplankton). Most gobies just lay down on the sand waiting, while some others hover on the top of the hole. The pair activity normally is reduced in the late afternoon, and in some cases during the night the shrimp closes the burrow entrance as a further protection against night predators. 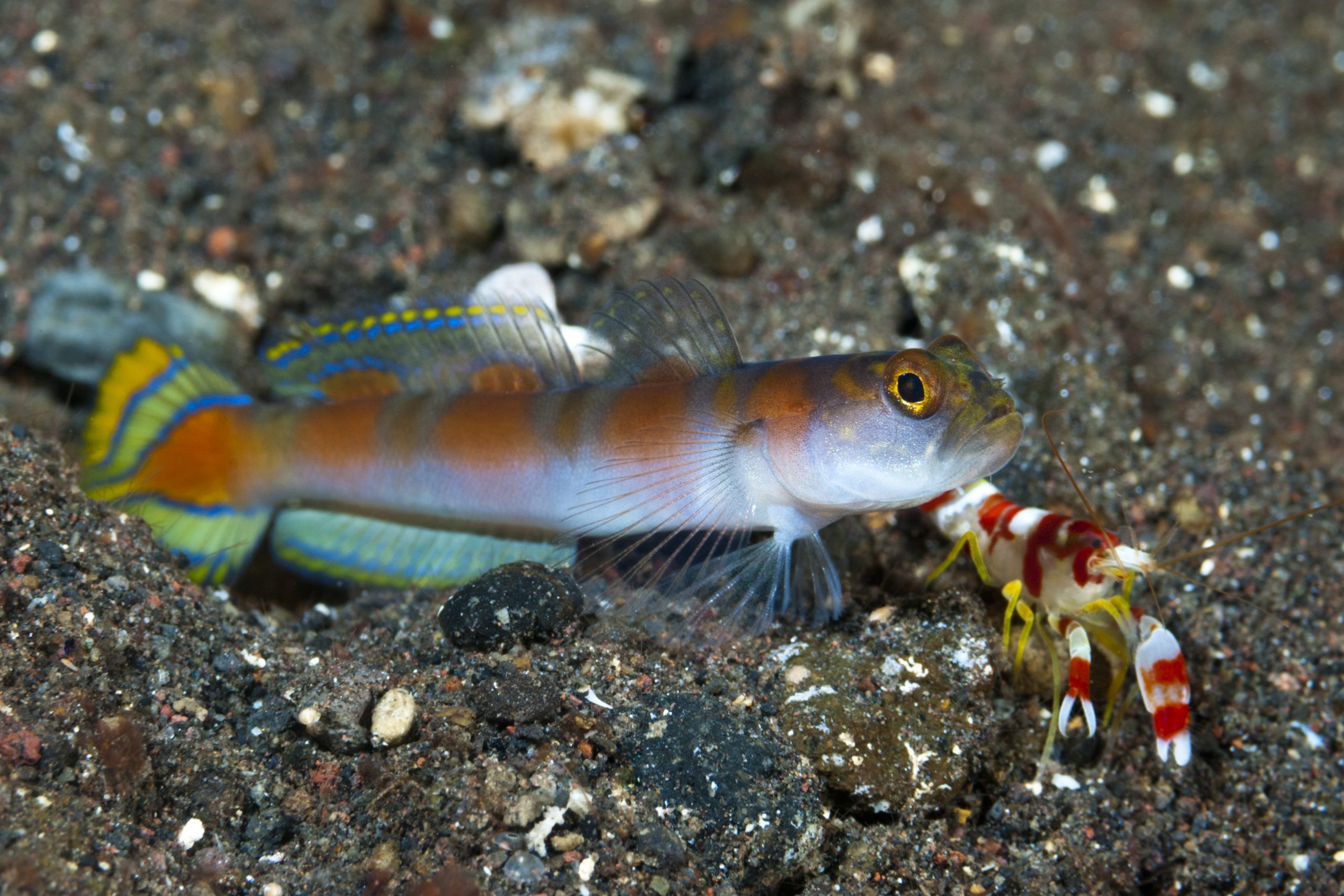 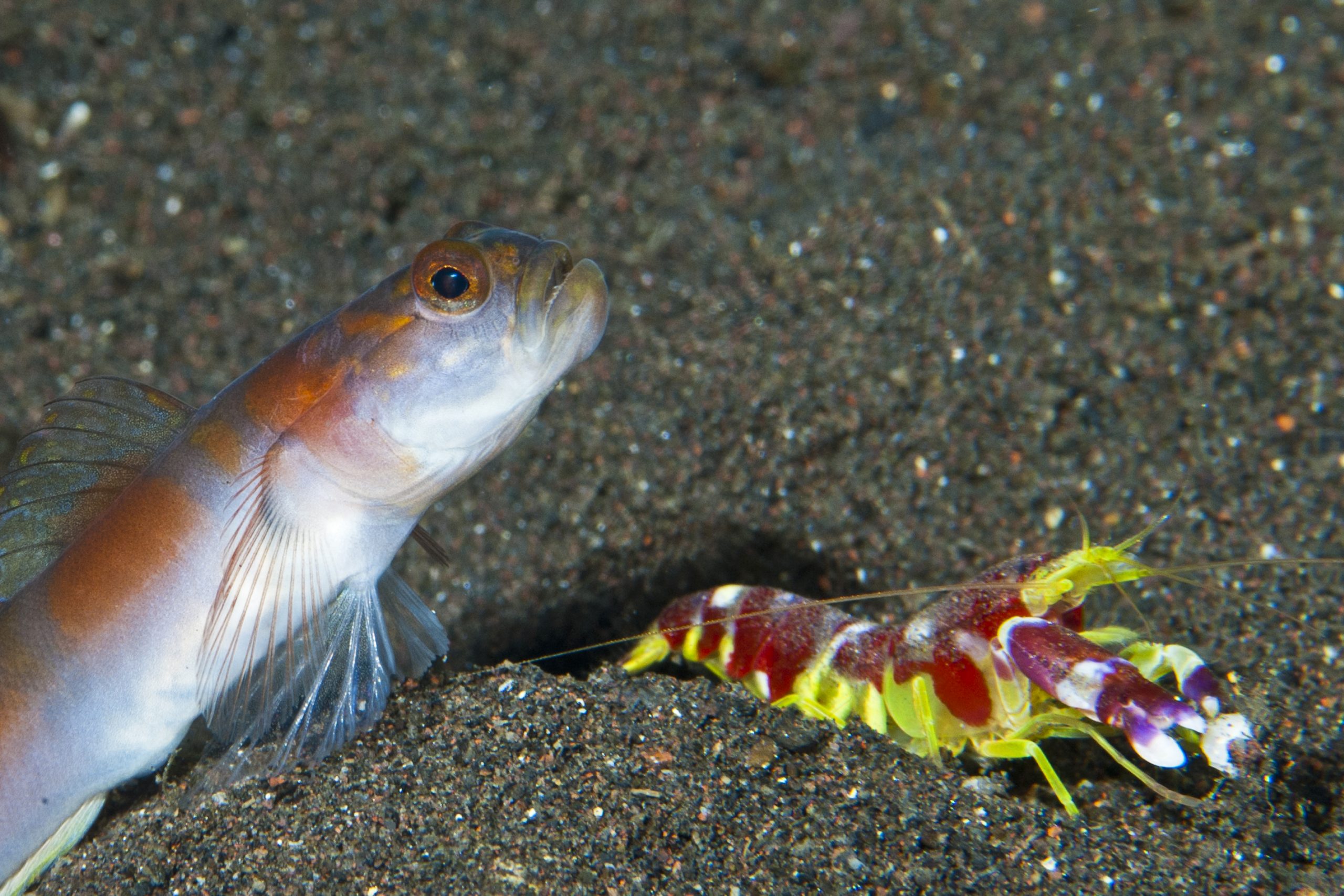 Fig. 3-3b: A Flag-Tail Shrimp-Goby Amblyeleotris yanoi sharing his burrow with the colorful shrimp Alpheus randalli. This is an example of obligate relationship: this goby share his burrow only with this species of shrimp. 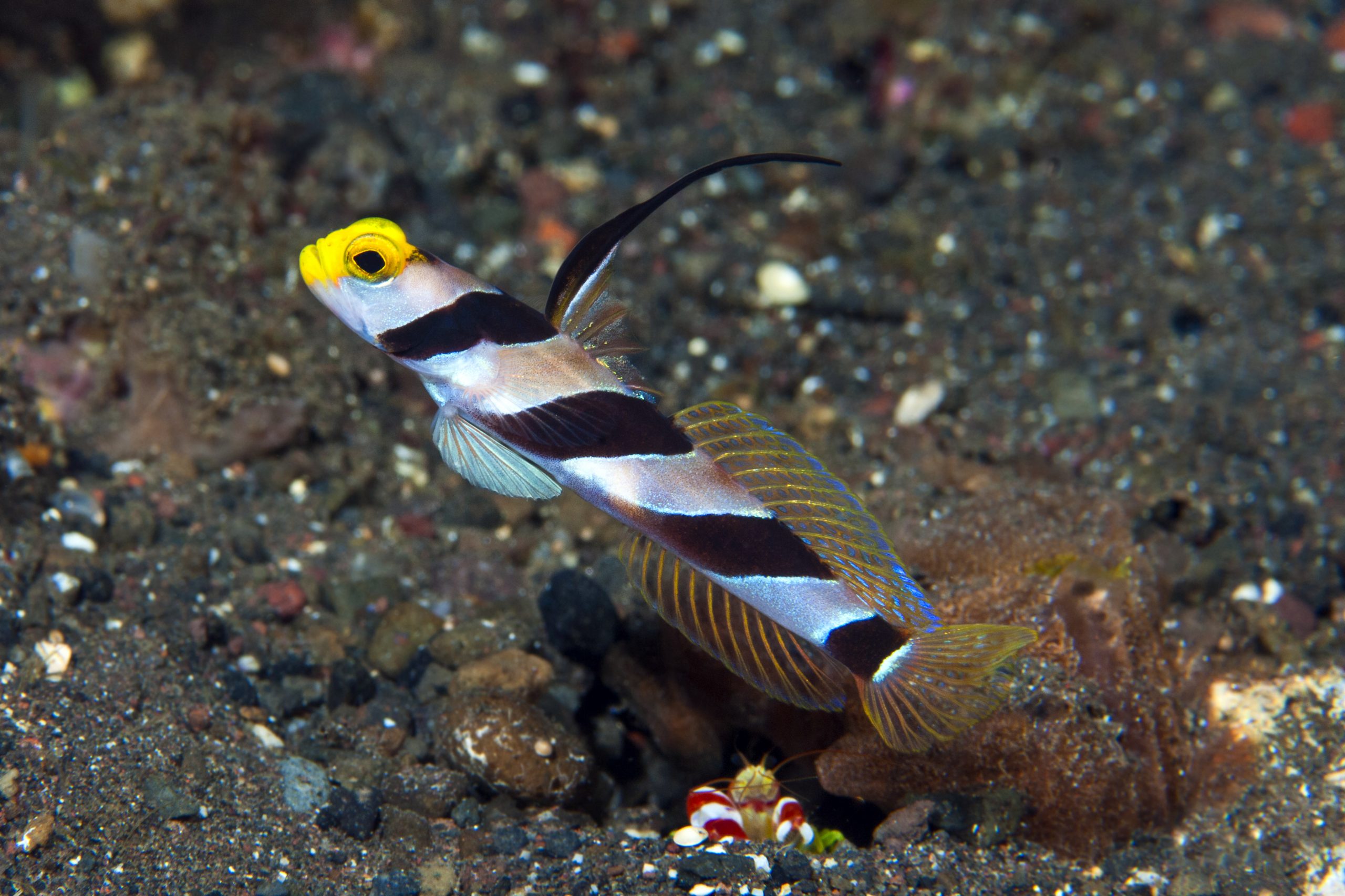 Fig. 4: A Black-Rayed Shrimp-goby Stonogobiops nematodes hovering out of his burrow where a shrimp Alpheus randalli keeps removing sand. Species belonging to the genus Stonogobiops have a swim bladder, feature not very common in the Gobiidae family. 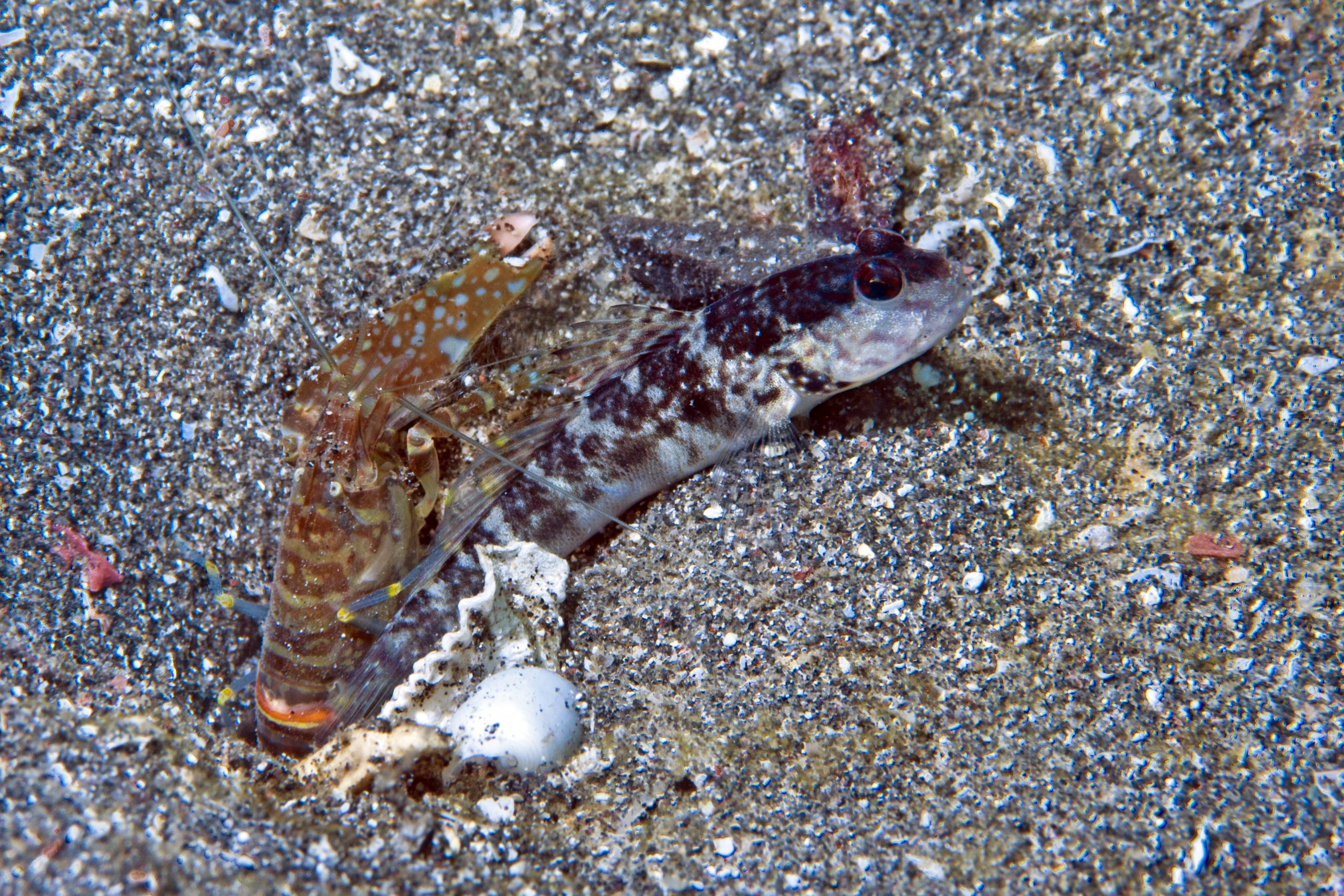 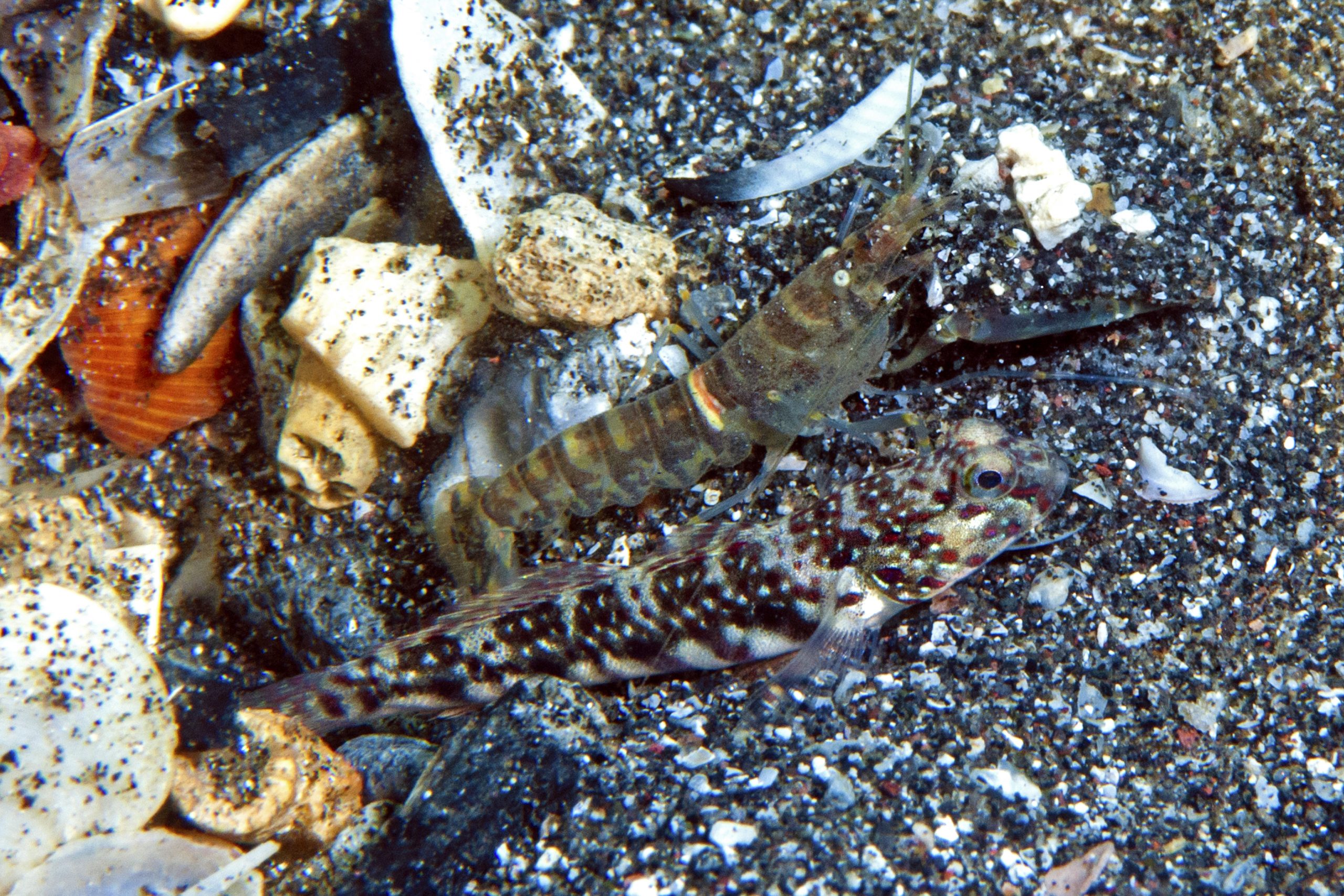 Fig. 5-5b: Not every Shrimp-Goby shows nice colors: this Black-Nape Shrimp-goby Cryptocentrus inexplicatus’s color pattern makes a perfect camouflage with the sandy bottom. On the contrary, his fellow shrimp Alpheus sp. displays a wonderful color especially on his legs. 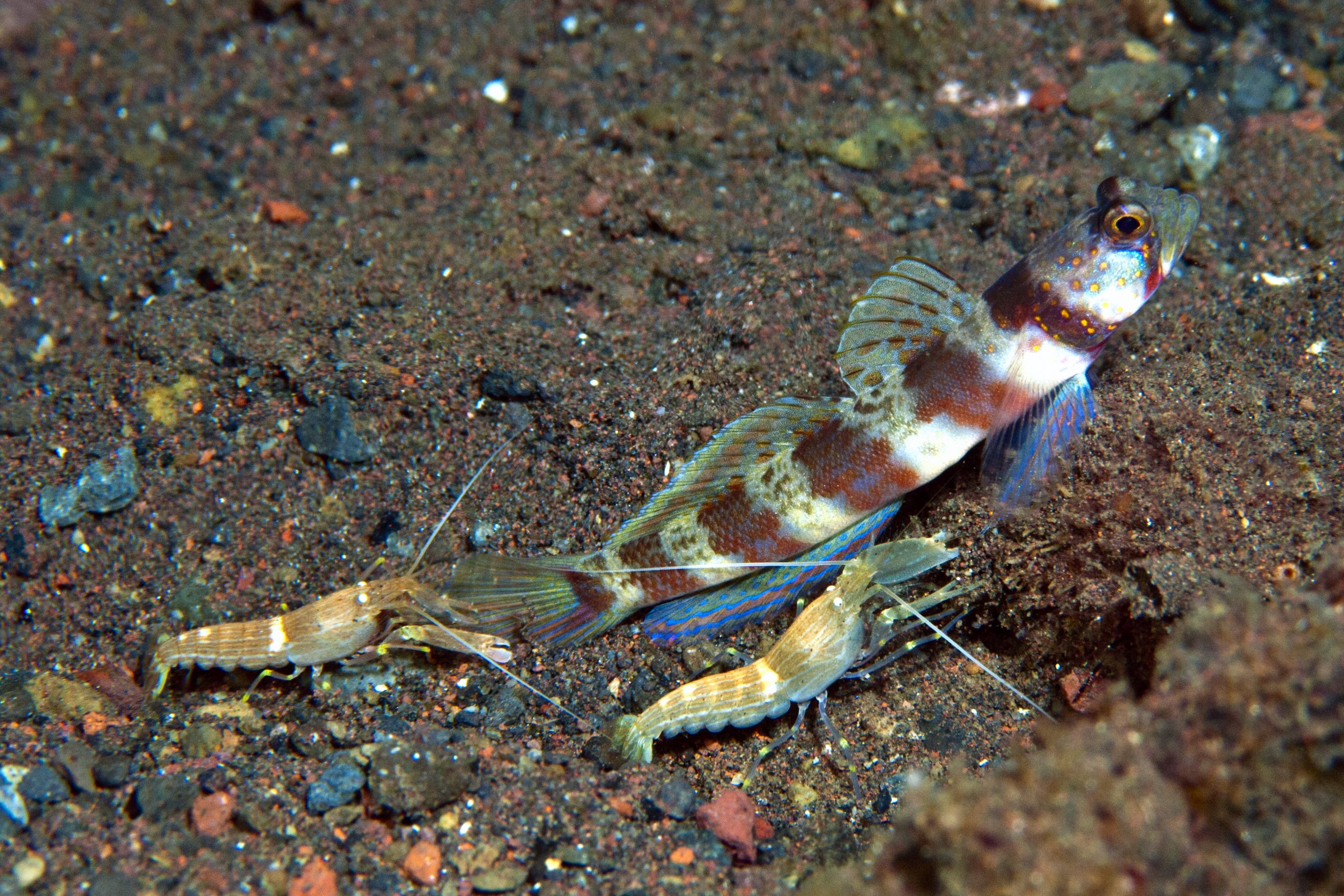 Fig. 6: Quite often the same burrow is inhabited by pairs of Gobies and/or Shimps. In this case a pair of Alpheus ochrostriatus share the burrow with Broad-Banded Shrimp-Goby Amblyeleotris periophthalma. It’s almost impossible to distinguish the sex of the shrimps without bringing them out of the water, anyway sometimes even male-male or female-female pairs have been observed. 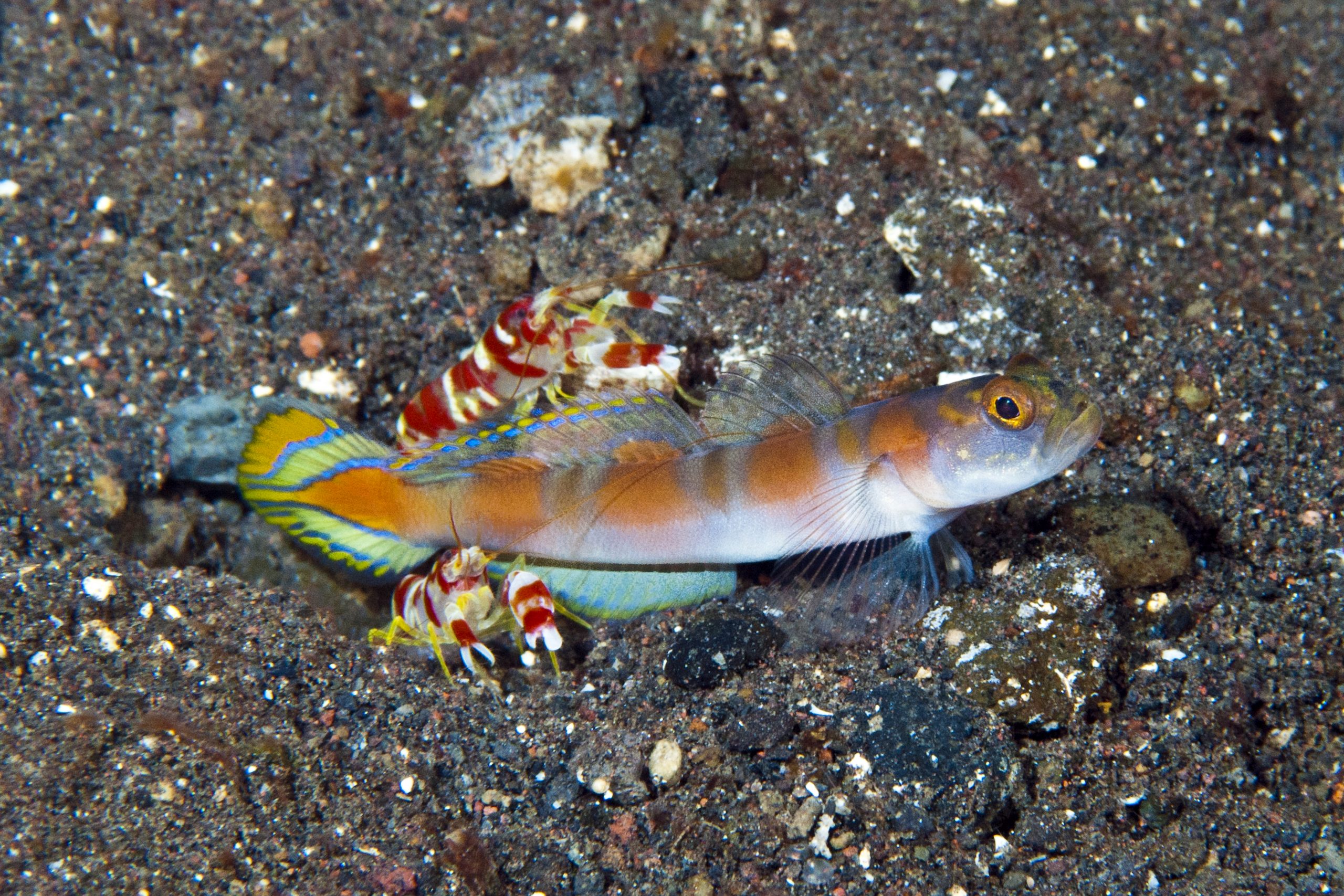 Fig. 6b: Quite often the same burrow is inhabited by pairs of Gobies and/or Shimps. In this case a pair of Alpheus randalli share the burrow with a Flag-Tail Shrimp-Goby Amblyeleotris yanoi. It’s almost impossible to distinguish the sex of the shrimps without bringing them out of the water, anyway sometimes even male-male or female-female pairs have been observed. 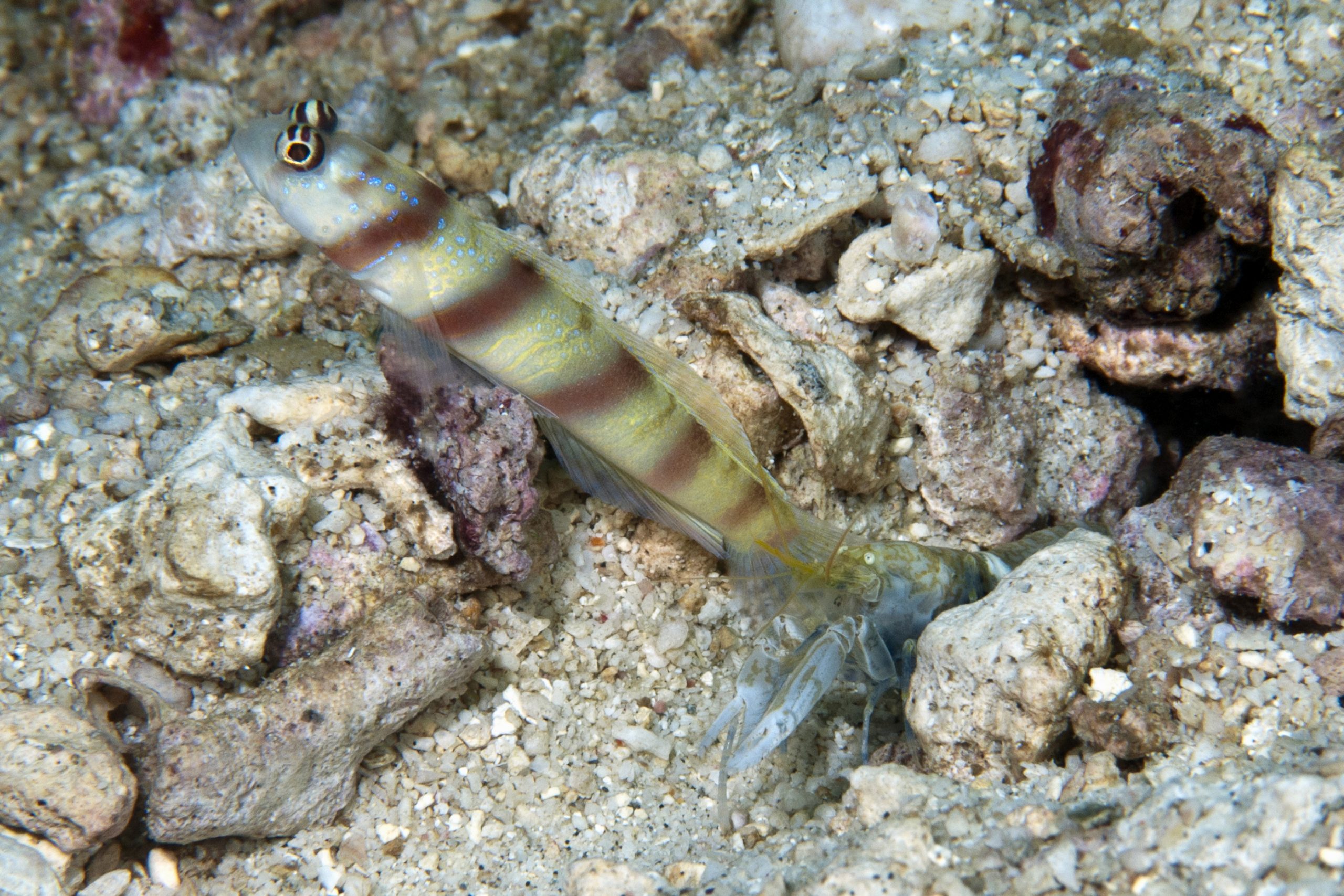 Fig. 7: smart engineers, this Steinitzi Shrimp-Goby Amblyeleotris steinitzi and his little shrimp Alpheus sp. have a reinforced entry, equipped with stones and pieces of coral that avoid the burrow entry’s collapse.

More than 130 different goby species belonging to almost 20 genera are officially already described, but probably many other are still waiting to be discovered, especially in the Coral Triangle area (Indonesia, Malaysia, Philippines an Papua New Guinea). The symbiosis has been observed with up to 30 different species of pistol-shrimps, mainly of the genus Alpheus.

The genus Amblyeleotris includes almost 40 different species, usually are the largest Shrimp-Gobies in the wild, growing up to 20 cm length in the bigger species, and with more fin rays than other genera. Even Cryptocentrus is a successful genus and it’s distinguishable for the bigger head and some other anatomical features. Ctenogobiops and Vanderhorstia are quite diffused all around tropical Indo-Pacific waters, but few species have been official described until now. One genus particularly loved by aquarists, Stonogobiops, includes few species all with swim bladder that allows them to hover motionless few centimeters on the top of the burrow entrance. 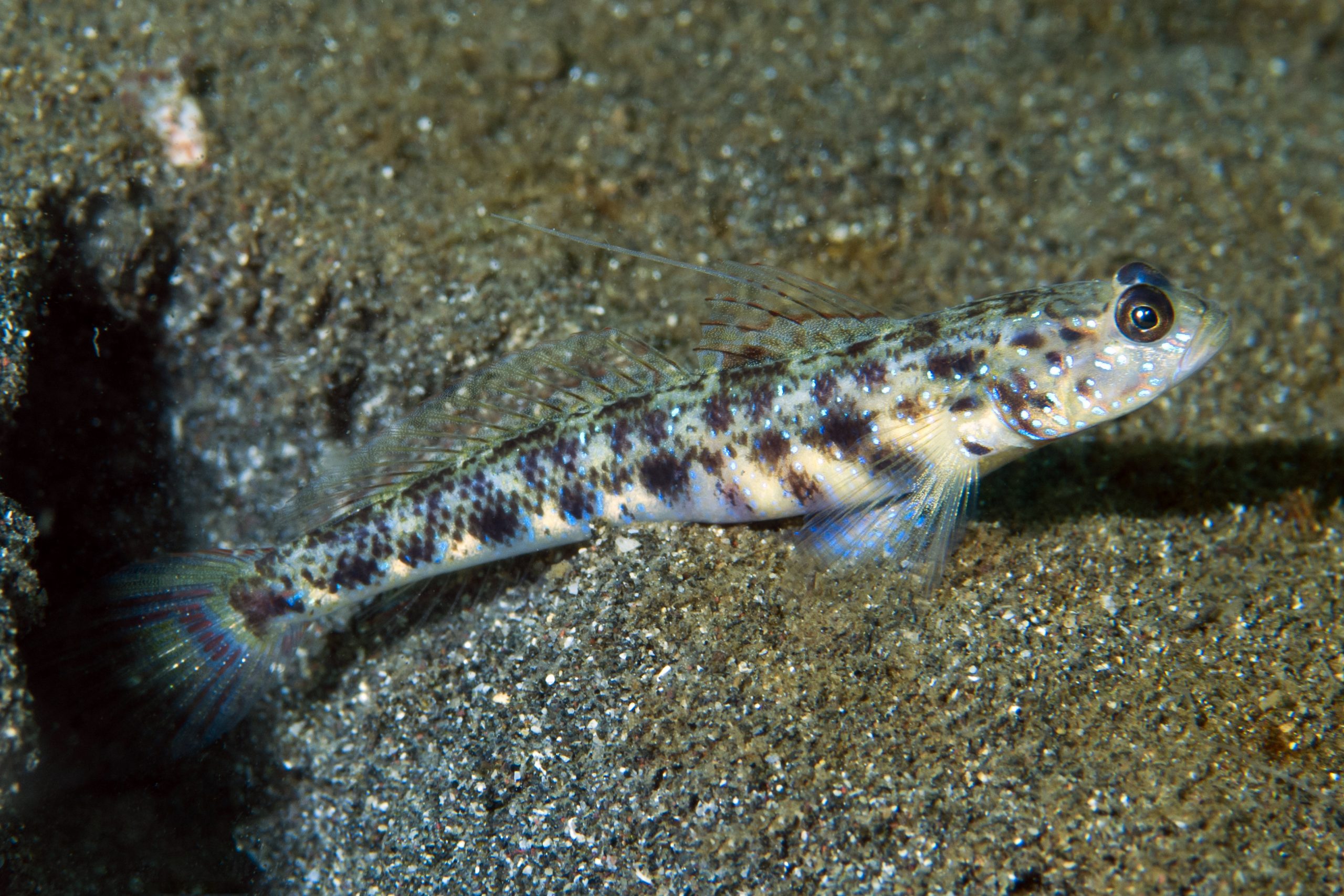 Fig. 8: many species of Shrimp-Gobies have not been yet described officially, like this Vanderhorstia sp. photographed in Tulamben (Bali, Indonesia)

Shrimpgobies in the wild feed on zooplankton mainly. Quite often a couple of gobies inhabits the same burrow, where the female lays the eggs. They are territorial fish even if the territory is not very large and in the same area it’s possible to find several couples. They are not very good swimmer of course, but can be very fast. 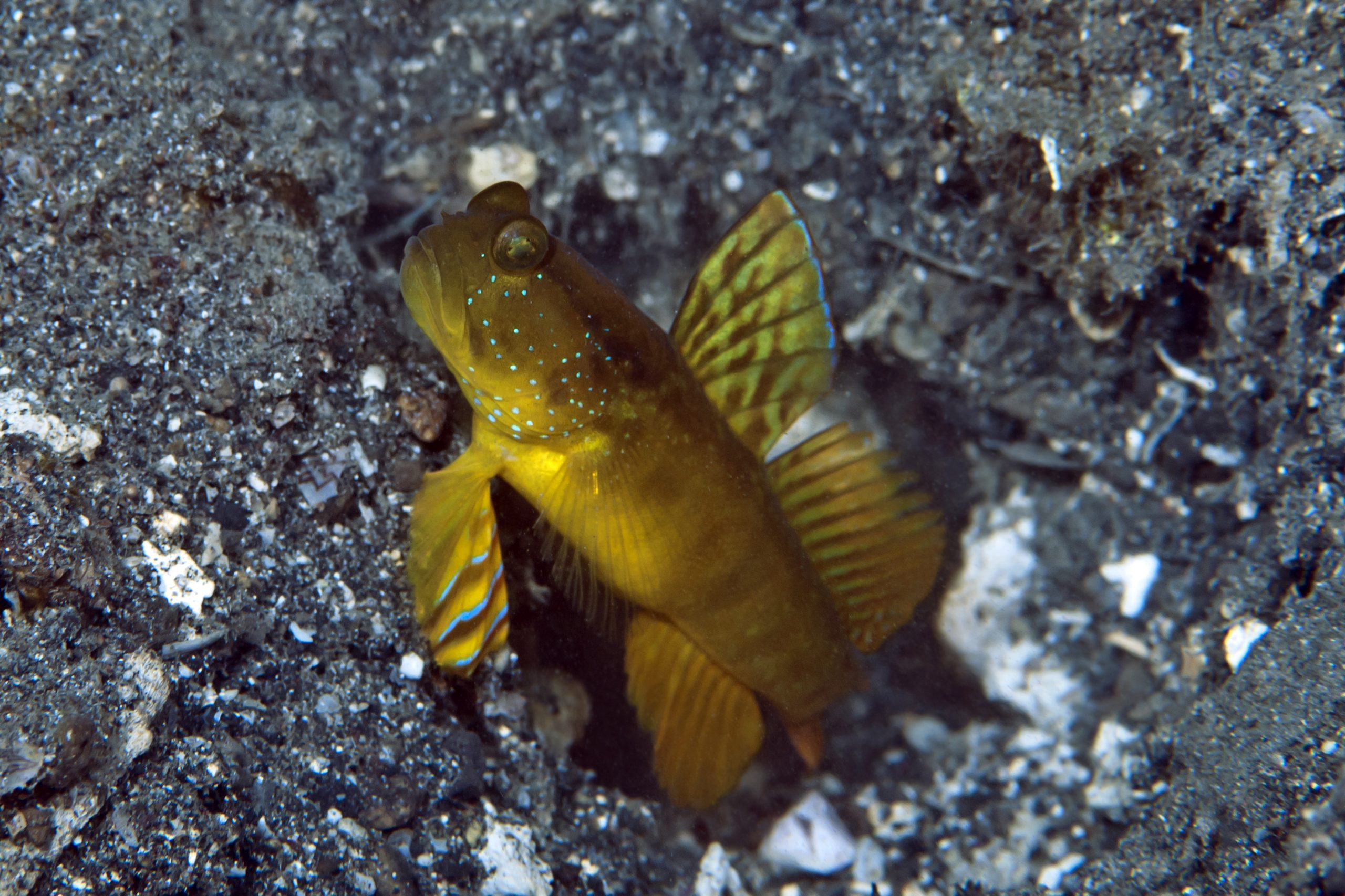 Fig. 8b: many species of Shrimp-Gobies have not been yet described officially, like this Cryptocentrus sp. photographed in Bunaken (North Sulawesi, Indonesia) 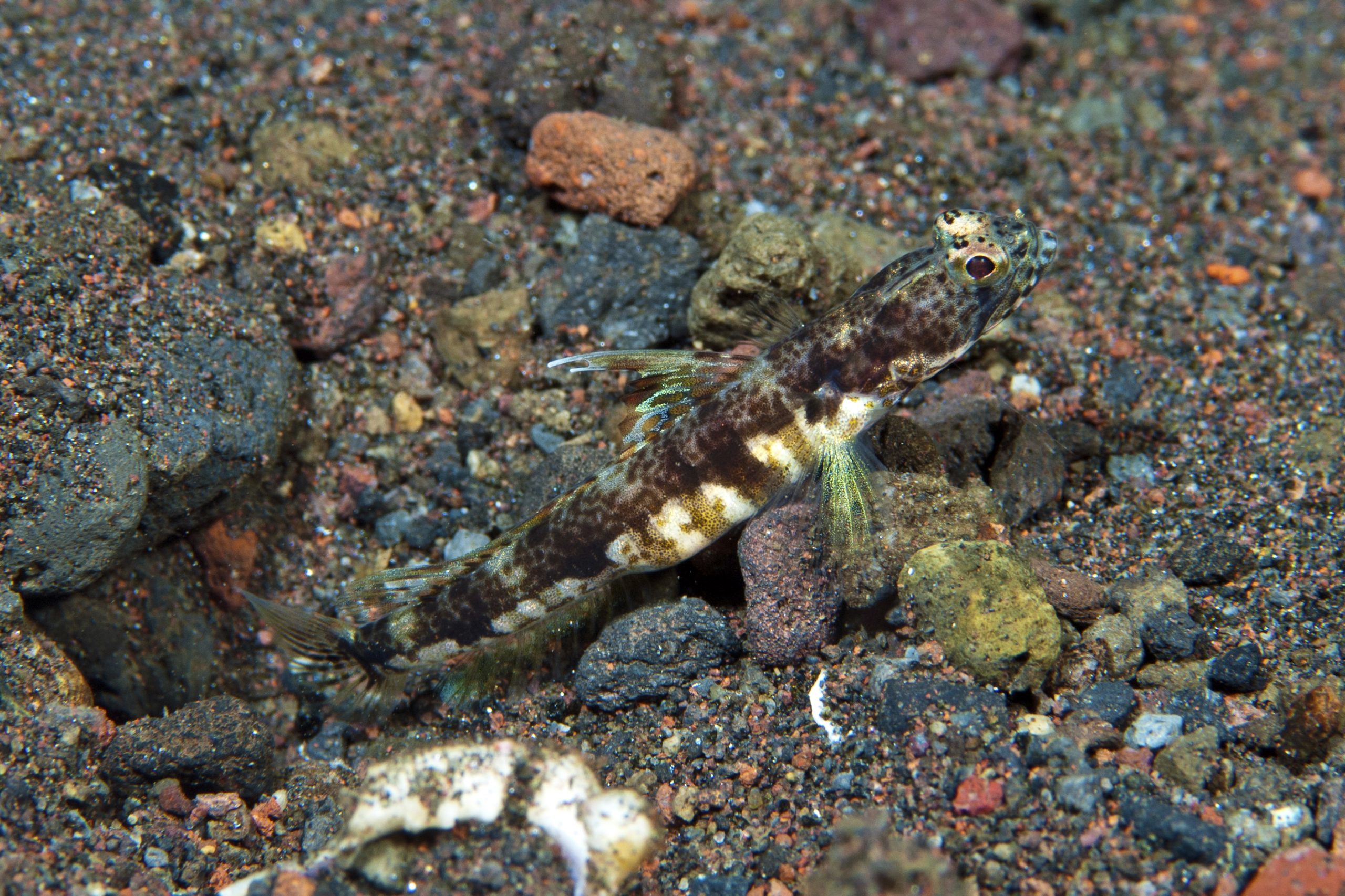 Fig. 8c: many species of Shrimp-Gobies have not been yet described officially, like this Flag-Fin Shrimp-Goby Tomiyamichthyis sp. photographed in Tulamben (Bali, Indonesia) 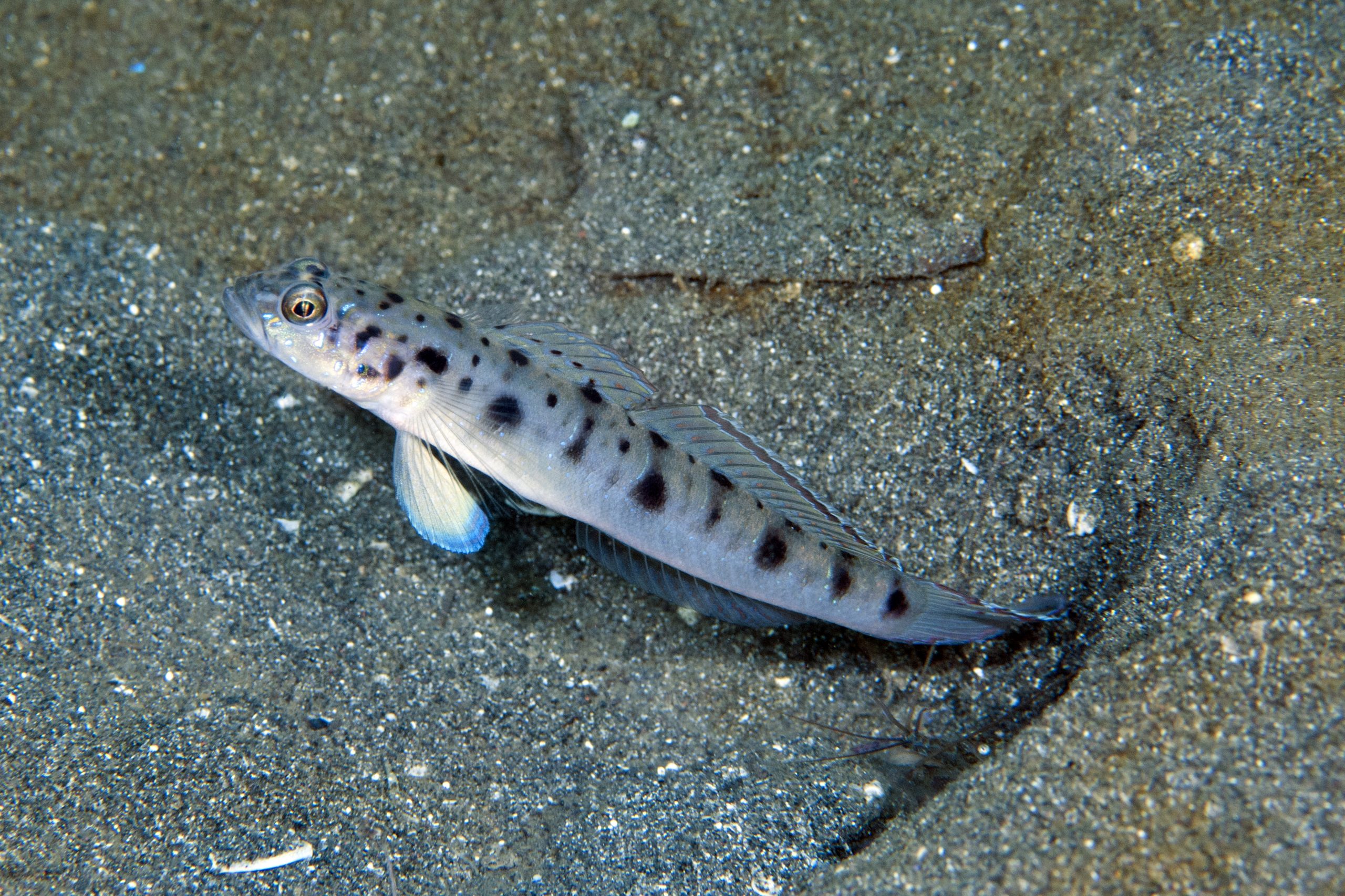 Fig. 9: the genus Vanderhorstia is relatively new and many species has been discovered in recent years. This Twin-Spotted Shrimp-Goby Vanderhorstia ambanoro inhabits sandy areas of Tropical Indo-Pacific.

All the shrimps living in association with a goby belong to the Alpheidae family (genera Alpheus or Synalpheus). They are even called “Snapping Shrimps” or “Pistol Shrimps” for their ability to produce a loud snapping sound using their larger claw. Even if they are so small, they are one of the major sources of underwater noise.

The production of this noise is one of the most amazing performances of the animal world: by snapping their claw they produce a small cavitation bubble that moves approximately 100 km/h generating a huge acoustic pressure. This bubble, producing almost 220 decibels, can also kill small fish or other animals and preys. A human eardrum ruptures a 150, just to give an idea of the power. And, unique case in the animal world, the bubble produces a small luminescence (not visible to the naked eye), called “sonoluminescence”, provoked by the bubble’s superficial temperature. Due the importance of the bigger claw in a snapping shrimp’s life, in the case they lost it, the second claw grows to replace the lose one, and the missing limb will regenerate in a smaller claw. This amazing phenomenon is called “claw symmetry” and it has been documented only once in nature. 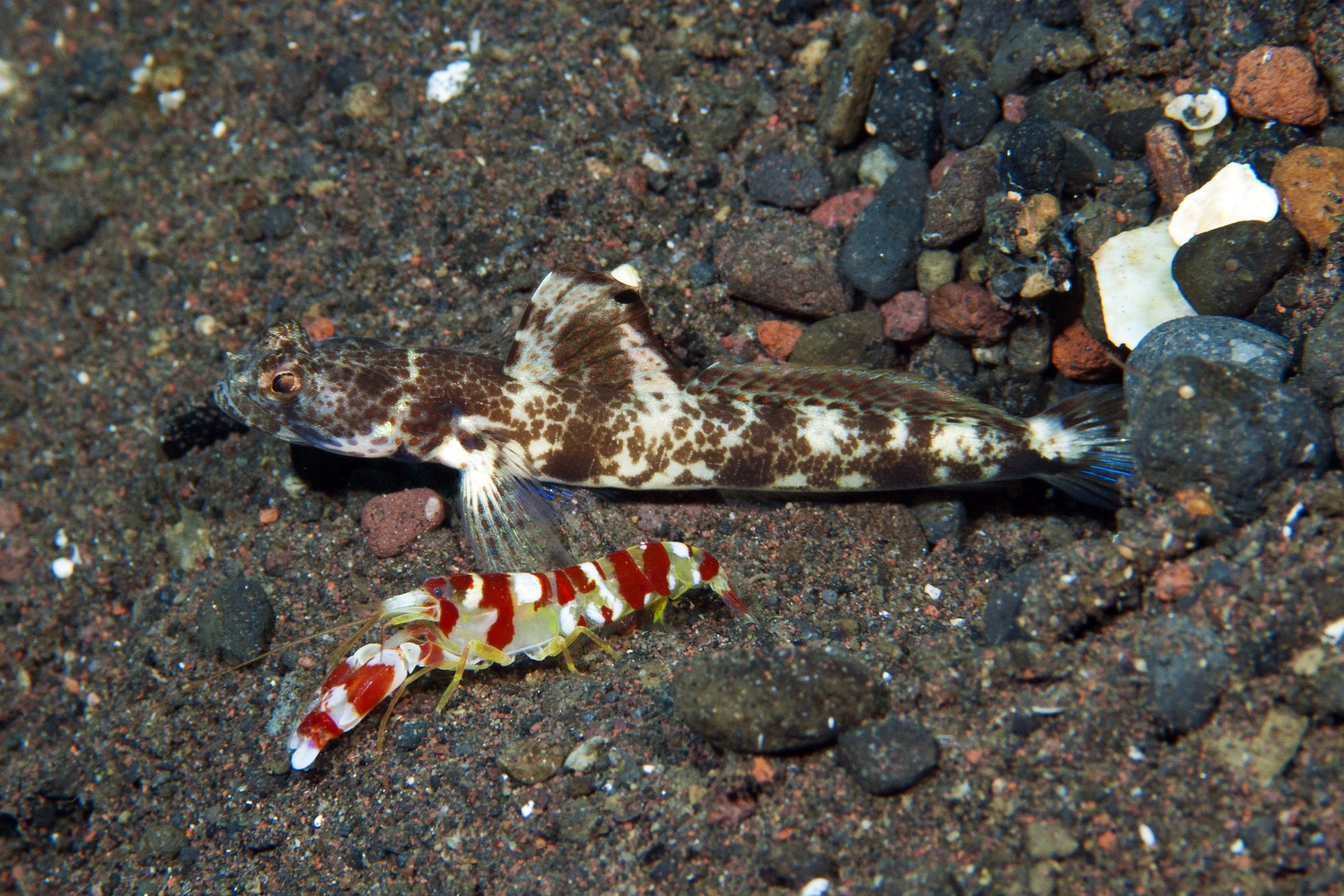 Snapping shrimps are socially monogamous and territorial, with females performing all parental care. Anyway, male and female partners share other duties like territorial defense, burrow construction, and foraging duties by returning food to the burrow, where both partners consume it.

Francesco Ricciardi is a PhD in Marine Biology, with specialization on the impact of pollution on marine life, aquatic biodiversity and marine tropical ecology, including some studies on symbiosis ecology. Underwater Photographer and Scuba Instructor since more than 10 years, he’s actually located in the island of Bali (Indonesia).