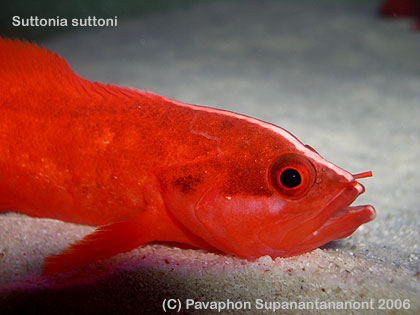 Recently, I’ve received a call from my fishy friend. I was told that he got two of the “red soapfish” in the shipment that just arrived from Indonesia. He said that the fish was clothed in bright red, with a clear white line in front of its head. The body was slender and very beautiful! After his explanation, I asked him to keep one for me. When I got home, and searching for some information about the species I found out that not many soapfish are the bright red color he described. At this point, I thought of the Dottyback and it allies. There was a general lack of information about this fish among Thai marine aquarists.

On the following day, I went to the shop in the early morning. As I stepped inside, my eyes caught two of the brightly color fish staying near the corner of the tank. These two fish were slender, a bright red color all over the body, and a white stripe on the forehead. That was the first time that I’ve seen this fish. I was surprised that it was a “Suttonia,” one of the fish that I always dreamt about seeing. The fish’s condition was not so good, perhaps because the shop put the fish in a bright place without any hiding place. Their natural habitat is around 12-24 meters near a rocky cave, where they probably prefer a dimly lighted habitat.

The genus “Suttonia” is composed of two species, S. lineata and S. suttoni. For this Sutto 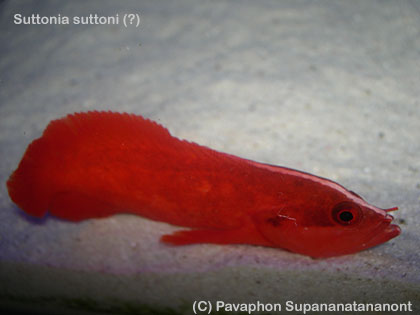 nia, at first I believed that it was S. suttoni because of the color and shape. But when I send the picture to a friend (a specialist), he suggested that it has more characteristics of S. lineata. S. suttoni is only known from the Western Indian Ocean, while S. lineata is a species that is widespread throughout the Indian Ocean, Hawaii, Philippines, and Indonesia. My friend also suggested that S. suttoni’s habitat might extend to the Andaman Sea, although no one has collected one there yet. These two species are very closely related in physical appearance. In my opinion, S. lineata seems to have a rounder body and shorter forehead than S. suttoni. Color is not a useful way to distinguish between these two species.

You may have noticed that there were only a few pictures of living Suttonia. In this case, I think that it is due to their secretive nature and that only a few have been introduced in Aquarium trade. When I brought the fish back home, I put him/her in a separate tank with a small and peaceful fish. At first, I was afraid that it would attack the small fish like larger dottybacks do. Since almost no information on this species is available both in books or on internet, I decided to put him/her in the tank and I was surprised that it lived happily together will small fish like the clown, damsel, and cardinal. The tank was arranged as a small cave and a lot of crevices for it to hide. Moreover, it was a peaceful and shy fish. 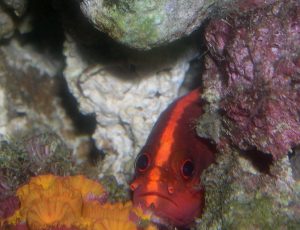 At first, I tried to feed him/her with live brine shrimp. Soon it became interested, but it took a lot of time for it to focus on its prey before capture. I tried with different kinds of food, like live glass shrimp to attract its attention and succeeded. The fish saw its prey and captured it in a second. Usually it will come out from the same crevice showing half of its head, observing its surroundings. This fish could be kept with corals, but not with shrimps and crabs. In my own opinion, I think that this fish needs time to focusing on its prey before it will eat it. So, if you put it in a huge tank with lots of fish I think that it would be surely starve to death.

From my observation, the fish will stay in one place and not go far away from its shelter. It will show only its face from the rock hole, similar to the Moray eel. So it would do great if the tank is fully arranged with enough live rock and cave for it to hide. But if you really want to have this fish, be sure that you think that it is worth the money that you’re going to spend for it – it’s an expensive fish.