Aquarium Fish: The Blue And The Queen Angelfish 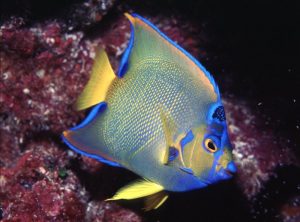 A gorgeous example of the queen angelfish. Florida Keys.

Everybody loves an angel! They are some of the most spectacularly colored fishes on the coral reef. In captivity, they can become as personable as the family dog once they have adjusted. Occasionally, a “new” angelfish will show- up in North American aquarium stores. In most cases, these are deepwater members of the genus Centropyge or some unusual color form of a more common species. But there are a number of angels that have been staples in the hobby for years that still inspire awe in the serious aquarist. Two of these “oldies but goodies” are the queen angelfish ( Holacanthus ciliaris ) and the blue angelfish ( H. bermudensis ). In this article, we will examine the natural history and husbandry of these Atlantic lovelies.

Lifestyles of the Queen and its Kin

Before we talk about how to best keep these two Holacanthus spp., I think it is beneficial to examine their natural histories. Not only will this information help us to better appreciate these two fish, it can also give valuable insights into their care requirements. Let’s start with the blue angelfish. 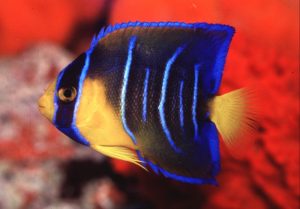 A juvenile queen angelfish – note the body bars and compare with photo below of young blue angelfish.

The blue angelfish is very similar to the queen. Adult blue angels differ from similarly sized queens in having a light blue pectoral fin with a yellow margin. In the queen, the pectoral fins are all yellow and have a dark spot at the base. In the adult blue the tail has a yellow margin, while in the queen the whole tail is yellow. Finally, the blue lacks the crown on the nape, the feature that is responsible for the queen’s common name (the queen’s crown is black with a blue margin and blue flecks). The juveniles of the two species can be more difficult to tell apart. In most cases, in the juvenile blue angelfish the first three blue bars on the side of the body are curved, while the last two are straight. In juvenile queen angelfish the first four are curved, while only the last bar is straight.

What makes separating the two species even more difficult is that they often hybridize. The progeny of these crosses share characteristics of both parents. For example, a juvenile hybrid may have a slightly curved fourth bar, while adult hybrids may look like a queen overall but have an incomplete or lack the characteristic crown, or look like a blue angelfish, except for having a yellow tail. The hybrids were once recognized as a distinct species, known as Holacanthus townsendi. 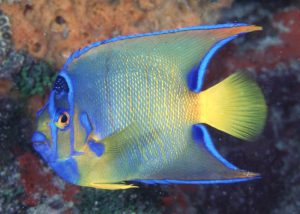 The blue angelfish occurs from Bermuda and North Carolina (juveniles sometimes collected off of New Jersey) to southern Florida, west to northern Gulf of Mexico offshore banks, south to the Yucatan; absent from the Antilles. It is more frequently encountered in channels, canals, and inshore reefs. Unlike the queen angel, the blue is more often found in coastal habitats, rather than oceanic islands. It is found around rocky outcroppings, patch reefs, on the reef face, and deep-reef terraces. It tends to associate with rich sponge and/or gorgonian growth, large coral heads, and artificial reefs (including sunken, manmade debris). The blue is found at a depth range of less than 1 to over 100 m. Juveniles are more often found in shallower water than the adults.

Like many in this genus, H. bermudensis feeds mainly on sponges. Juveniles do feed more on algae than the adults and are also part-time cleaners. Adults are often seen in pairs, but in areas where they are more abundant, it is probably haremic like the other Atlantic Holacanthus. Juveniles are known to be territorial, while males are more than likely so. 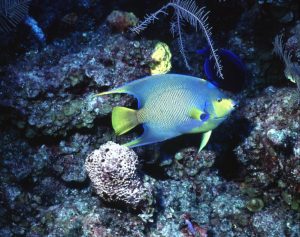 The queen angelfish ranges from Bermuda to southern Florida, Bahamas, and Gulf of Mexico to Brazil, east to St. Paul’s Rocks. It is widely accepted that individuals from the Bahamas and Caribbean islands are more colorful than those from continental shorelines. There are two common H. ciliaris color phases. One is yellow overall, the other is green. Both forms have the characteristic crown on the head and blue trim on the median fins, blue around the mouth, on the gill cover, at the base of the pectoral fins, and on the “chest.” This species develops long, graceful fin filaments as it grows.

Aberrantly colored individuals have been reported from the eastern Atlantic. Queen angelfish from St. Paul’s Rocks are colored like Japanese Koi. Their unusual coloration-white, black, and orange-is possibly related to inbreeding that may occur in this isolated population. Unusually colored Individuals have also been reported from Brazil. These specimens are dark blue on the head grading to a lighter blue toward the tail, with a blue crown and white pelvic and caudal fins. (These oddly colored Brazilian fish command a very high dollar in the aquarium trade.) Another unusual color form has been described from Fortaleza, Brazil. These individuals have unusual blue markings on the face and a blue ring around the eye. It was proposed to be a new species, but it is know doubt just another H. ciliaris color variant. (One of these blueface variants is reported to be found for every 300 or so normal” queen angels.) 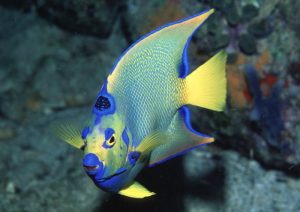 The queen angelfish is found on inner and outer reef tracts, but it is more abundant on offshore reefs. It occurs at depths of 2 to 70 m. Adult queen angelfish feed almost exclusively on sponges (96.8% of the diet in one study) and consume a variety of different species. In one report, the stomachs of 26 specimens contained 40 different species of sponges, representing 33 different genera. Adults also supplement their diets with tunicates, hydroids, and bryozoans. Juvenile queen angelfish feed primarily on filamentous algae, but also clean other fishes of crustacean parasites.

The queen angelfish is haremic, with males defending a territory occupied by two to four females. The male visits each female during the day and will feed with one female for two to five minutes before moving on to the next. When the male approaches a female, he will rush at her and then rapidly circle around her. Queen angelfish spawn just before sunset. The male swims alongside the female and flicks his pelvic fins outward and also swims in circles above her with all his fins extended. The pair then makes a spawning ascent with the male positioned below the female with his snout touching the area around her vent. 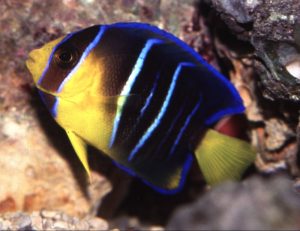 The queen and blue angelfish are some of the most durable of all the pomacanthid species. Not only are they fairly hardy, both of these species are showy, bold aquarium inhabitants (i.e., they do not swim for cover every time you approach the aquarium). But there are two downsides to keeping this fish. One of these is that they both attain a maximum length of around 15 inches. As a result, the adults will need to be housed in a large tank with plenty of swimming space. They will need to be provided with adequate shelter, but should not be kept in a tank that is so full of decor that they have difficulty moving about the aquarium. It possible to keep juveniles in tanks as small as 20 gallons, but they will grow rapidly if fed correctly, and they will often cause aggression problems in such confined quarters.

That leads me to the second queen and blue angelfish downsides. These angelfish have a propensity to behave aggressively toward their tankmates. Fortunately, this predisposition to do harm can be curbed to some degree if care is taken when choosing an aquarium and tankmates for these fishes. For the most part, juveniles and subadults tend to be more aggressive than larger adults, so take special care when choosing a tank and tankmates for a smaller queen or blue. If you are going to keep them in a community of more docile fishes, the aquarium must be large (100 gallons or more) with lots of hiding places for the smaller and less aggressive species. It is usually best to house them in large aquariums with other combative species. 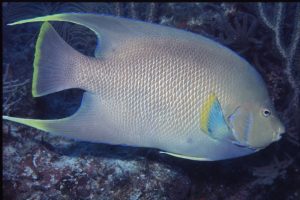 The queen and blue angelfish may also prove to be lethal to sedentary predators, like frogfishes and scorpionfishes. They will often nip at these fishes persistently, causing open wounds that are potential sites for bacterial infections. I have also seen these angelfish bite and injure small stingrays. If you are attempting to keep these fish with other angelfishes, make sure that the queen or blue is the last addition to the aquarium. It is very risky to place two members of the same species in the same tank, although it can be done if you have a very large tank, if the individuals are distinctly different in size, and if smaller fish is added first. A glass partition can be used to habituate individuals to one another before they are allowed to interact.

Like other angelfishes, H. bermudensis and H. ciliaris feed throughout the day and do best when fed more frequent, smaller meals, rather than one or two larger servings. They will readily accept chopped fresh and frozen seafoods, live or frozen brine shrimp, Mysis shrimp, frozen preparations, and even flake food. To ensure good health and color fidelity, it is imperative to offer a varied diet that includes lots of plant material. This would include foods loaded with Spirulina algae and the dried algae known as Norie. Ocean Nutrition, for one, sells dried algae sheets, including green, brown, and red algae, that these fish will consume with gusto. Another great food replete with vitamins A and C is fresh broccoli. These two angels also enjoy browsing on algae growing on the tank decor, and it is good idea to occasionally add some green macroalgae (e.g., Caulerpa ) for them to feed on. 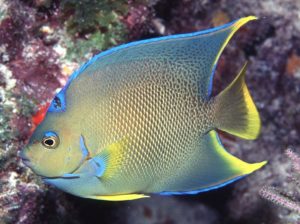 Although these fishes will eagerly accept the “meaty” foods listed above, a diet too high in protein can lead to deposition of fat around the liver, which can cause this organ to stop producing vitamin A. This can result in the fish becoming blind. This malady, often referred to as nutritional blindness, is occasionally seen in members of this genus. You should be aware that tiny juvenile blues and queens may be more difficult to acclimate than individuals that are slightly larger (2 inches of over).

Unfortunately, the queen and blue angelfish are prone to ick ( Cryptocaryon irritans ) and occasionally suffer from flukes and Lymphocystis infections. They can suffer from head and lateral line erosion, but are less prone to this malady than the Pomacanthus spp.

So, is it possible to keep one of these beauties in my reef aquarium? While juvenile blue and queen angelfish may not be overly destructive in a reef aquarium, adults will typically cause problems. They are likely to nip at stony corals, zoanthids, and tube worms. Although these fishes do not feed on soft corals in the wild, they have been known to pick at gorgonians in captivity. They can, however, be kept with some of the more noxious soft corals. They are not a threat to ornamental crustaceans.