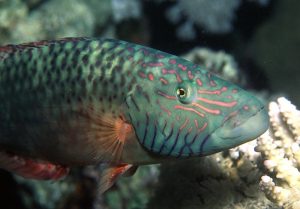 A curious cheeklined Maori wrasse watches the author as he moves along the reef.

The first time I met a cheeklined Maori wrasse ( Cheilinus diagrammus ) I was not in my local aquarium store, but on a coral reef in Fiji. I recognized the fish, having had seen its photo in books before, but I was not aware that it was a fish with such “personality!” I was moving along the edge of the reef, occasionally resting on the sand. I noticed that this wrasse was following me and that every time I would put my fin on the soft substrate, it would dash in to see if I had displaced some poor, sheltering worm or crustacean. I soon became intrigued by my piscine companion and began flipping bits of rubble and digging in the sand, as my “pet” C. diagrammus followed along and pounced on anything I succeeded in flushing out. From that encounter on, I have been in love with Maori wrasses!

Unfortunately, not all Maori wrasses are idea aquarium inhabitants. But if you have a large enough tank, and are prepared to make some sacrifices when it comes to selecting tankmates, the cheeklined Maori wrasse is a delightful addition to the large home aquarium. Let’s take a close look at this personable fish. 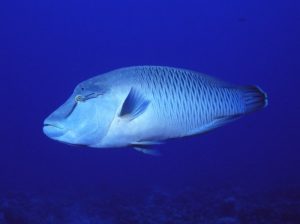 The behemoth of the larbid family – the humphead Maori or Napoleon wrasse ( Cheilinus undulatus ).

The name Maori wrasse is typically applied to the members of the genus Cheilinus. This common name is derived from their facial markings, which are reminiscent of the tattoos that the New Zealand Maoris use to wear on their faces (some still wear them). According to Kuiter (2000), the genus Cheilinus contains 20 species, three of which have yet to be formally described. Some authors place nine members of this group (including C. diagrammus ) in the genus Oxycheilinus. But in his review, Kuiter considers Oxycheilinus as a subgenus within Cheilinus. The Maori wrasses belong to the labrid tribe Cheilinini, which also includes the fairy wrasses ( Cirrhilabrus ), slingjaw wrasses ( Epibulus ), flasher wrasses ( Paracheilinus ), lined wrasses ( Pseudocheilinus ), the pinkstreaked wrasse ( Pseudocheilinops ataenia ), sneaky wrasses ( Pteragogus ), and possum wrasses ( Wetmorella ).

As a group, the Maori wrasses are quite different from many of the other wrasses (including others in the tribe Cheilinini). The most important difference involves size. The Cheilinus spp. are some of the larger labrids. The smallest member of the genus attains a length of approximately 5 inches. The largest, can attain the gargantuan proportions of 6 ½ feet! This species, the humphead Maori wrasse ( Cheilinus undulatus ), is one of the biggest bony fishes found on coral reefs. If we take the average maximum length of all 20 members of the genus, the maximum length is about 34 inches (if we through out C. undulatus, the average length is approximately 25 inches). The cheeklined Maori wrasse attains a maximum length of about 14 inches. 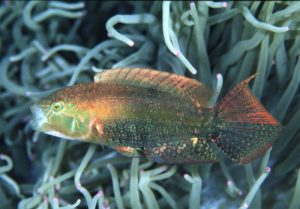 One of the smaller members of the genus, the twinspot Maori wrasse ( Cheilinus bimaculatus ), is a great aquarium fish.

The cheeklined Maori wrasse is one of the “sports models” of the genus. It has a slender, sleek-looking form, complete with pink or maroon pin-stripes on the face and gill covers. Its body color is variable and can change in an instant, enabling it to blend in better with its surroundings or a fish that it is following. The most common body color is olive to gray brown with an orange bar on each scale, but it ranges from a pale gray to deep purple. In the aquarium, C. diagrammus often exhibits a lighter, less attractive coloration. This is especially true in a tank with lots of white sand substrate.

The Ways of the Maoris

All of the Cheilinus spp. are voracious predators that feed on a variety of invertebrates and fish. They have strong jaws and large canine teeth that are effective at grasping active prey species as well as breaking-up larger food items. Their well-developed pharyngeal teeth are used to crush-up invertebrate hard parts. Food habit studies suggest that the Maori wrasses typically consume one large prey item and then go sometime (possibly two or three days) without feeding again. At least one species hunts most frequently early and late in the day and sleeps in reef crevices at night. Although there is no data available on the food habits of C. diagrammus, a closely related species (i.e., Cheilinus unifasciatus ) is known to feed on fishes, crabs, shrimps, brittle stars, heart urchins and sea urchins. 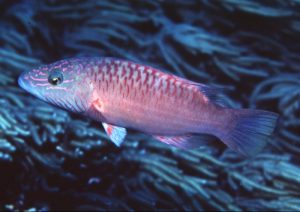 The Maori wrasses stalk or ambush their prey and some employ more ingenious hunting techniques. For example, some species associate with goatfishes, triggerfishes and stingrays (i.e., species that disturb bottom materials) and capture prey that these fish flush from the substrate. In the Red Sea, the cheeklined Maori wrasse will adopt the color pattern of the longbarbel goatfish ( Parupeneus macronema ), which is pale with a dark lateral stripe. It will associate with shoals of feeding P. macronema and pounce on prey items that the goatfish scares out during their feed activities. It will also associate with and mimic the coloration of several dark colored damselfishes. This is known as aggressive mimicry, that is, where a predator mimics a species that is not a threat to its prey.

The cheeklined Maori wrasse will employ an even more sophisticated strategy to capture its prey. It will use other fish as a moving blind to approach its unsuspecting quarry. Studies on this species in the Red Sea demonstrated that it swims alongside larger herbivores (e.g., Sohal surgeonfish, Acanthurus sohal, striated bristletooth, Ctenochaetus striatus ). In order to be even less conspicuous, this wrasse adopts a color similar to the species its riding. This feeding tactic is known as “hunting by riding.”

All of the Maori wrasses are thought to be protogynous hermaphrodites and at least some species exhibit sexual dichromatism and/or dimorphism. In most cases the morphological differences between the sexes involves the shape of the tail (e.g., males have one or more long filamentous rays). None of these difference in fin shape have been reported in C. diagrammus. Male cheeklined Maori wrasses may be larger than females. No information exists on the social structure of the Maori wrasses, but they are usually observed as solitary individuals. 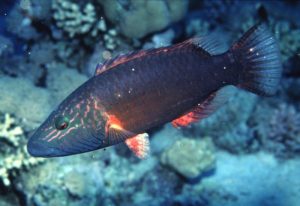 The cheeklined Maori wrasse is a voracious predator that will consume small fishes and a variety of invertebrates. The solid color phase is seen here.

When first placed in the aquarium the cheeklined Maori wrasse are often shy. It is not uncommon for this fish to lie behind reef structure, sometimes for days, before making an appearance. Although they can be aggressive fish once they acclimate, they are very sensitive to being picked on during the initial adjustment period. If they are intimidated or attacked by larger hawkfishes, damsels, surgeonfishes, triggerfishes or any other pugnacious tankmate they will not adapt and will probably perish. Therefore, they should be introduced into the aquarium first if housed with these types of fish. If they are going to be kept with less aggressive species (e.g., butterflyfishes, sweetlips, goatfishes) they should be added to the aquarium after them. It is also important for the aquarist to bother them as little as possible during acclimation. As they become more accustomed to the aquarium they will do less lurking and explore more exposed areas of the tank. Make sure you have a cover on the tank, a they have been known to leap out of an open aquarium. 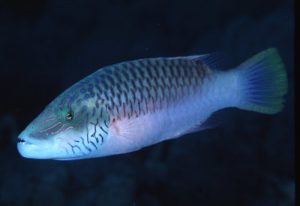 Photo 6. The cheeklined Maori wrasse exhibits a variety of different color phases that can be changed almost instantaneously. The bicolor phase is shown here.

Their size of the cheeklined Maori wrasse has strong dentition and a highly predatory nature, which makes it a greater threat to potential fish and invertebrates tankmates.

Cheilinus diagrammus will eat any fish it can swallow. If it is able to capture and handle a larger fish, it may take it and attempt to break it into bite sized pieces by smacking it against hard substrate! My friend, Larry Jackson, has a wonderful photo showing a cheeklined Maori wrasse swimming around with a large dragonet sticking out of its mouth.

Cheilinus diagrammus is also a threat to a variety of invertebrates. They will eat snails, tube worms, ornamental shrimp, small crabs, brittle stars, sea stars and even urchins; therefore, I would not recommend them for the invertebrate aquarium. They do eat mantis shrimp, so if you can house one with your live rock and remove it before adding your desirable invertebrates it may help decrease their numbers. I have also had larger specimens consume fire worms. However, they will also eat brittle stars, pistol shrimp and tube worms growing on or in the rock.

Once they acclimate, the cheeklined Maori wrasse may display combative tendencies, occasionally nipping or chasing newly introduced fish tankmates. No more than one Maori wrasse of the same species should be kept per aquarium, since fighting is likely to occur in aquarium confines. If you want to keep to Cheilinus spp. in the same aquarium, introduce them simultaneously and provide a lot of hiding places. Species that are different in shape and color will be more likely to get along than similar forms. Some Maori wrasses may also display aggression toward similarly shaped wrasses.

The cheeklined Maori wrasse is usually not particular about what it eats in captivity. It will feed on larger piece of fresh seafood, cubes of frozen prepared foods (that have been thawed) and live feeder fish. If you have a specimen that is reluctant to feed, try adding some small live bearers (e.g., guppies or mollies), ghost shrimp or fiddler crabs to the aquarium. I have yet to see a Maori wrasse refuse such an offering. It is important to switch them over to a more varied diet once they have been induced to feed. Once they recognize you as the primary food source, they will begin begging for food ever time they see you enter the room.

The interesting behavioral repertoire of this species alone makes it a worthy addition to a fish-only aquarium. It is an extremely personable fish and can provide hours of interesting observation. The aquarist must remember that the normal bill of fare of this species is any fish or crustacean that can fit in its mouth, which is fairly large.