The cherry anthias, also known as the Sakura anthias (a.k.a. Sakuradai () in Japan), is a large, attractive and very hardy member of the family Serranidae (groupers and their allies) and the sub-family Anthiinae (the anthias). Their genus name Sacura refers to their red coloration, like a cherry fruit. The species name margaritacea means “pearly” and describes the white pearlescent spots on the sides of adult males (Jordan and Richardson 1910). They are found on rocky reefs in the coastal waters of Japan usually at depths of 75 to 200 feet (Hemdal 2006). They range throughout the Northwest Pacific Ocean, possibly as far south as at least Taiwan in deeper water (Froese, R. and D. Pauly. Editors. 2009). 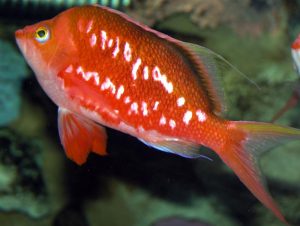 Like most anthias, they are protogynous hermaphrodites; as they grow, they transform from juveniles into functional females. As they grow still larger, (and under certain environmental conditions) they become males. The dividing size between females and males is 4.5″; most fish larger than that size are males (Okada 1965). A full grown male can reach 6″ standard length (not including the caudal fin and filaments).

In recent years, a few of these fish have entered the aquarium trade in the United States from Japan. Introductory prices have been steep, $250 to $500 retail, depending on the fish’s size. However, it is unlikely that this species will see a subsequent price drop as is often noticed in “new to the hobby” fish from other regions. For example, the first mandarin dragonets had a retail price of over $300 back in the early 1970’s, but the price dropped to around $20 within a few months (Hemdal 2006). With the Sakura, their origin in a highly developed country, (Japan) means that collectors and shippers of the fish will always require higher compensation for their fish, and the distance they need to be shipped means that transport costs will always be high.

The Sakura is arguably the hardiest member of the anthias group as long as their basic needs are met. The primary obstacle for home aquarists is the temperature requirements for this species. Sakura have a wide range of temperatures they can tolerate (48 to 82 degrees Fahrenheit) but their preferred range is a bit on the cool side for most home aquariums; 62 to 73 degrees, with the optimum being around 68 degrees F. There are reports of Sakura being kept long term at tropical temperatures, but it is unknown if this negatively affects their overall longevity (as it does with some other temperate species such a Catalina gobies).

Feeding is no problem, Sakura will eat a large variety of meaty seafood items if processed to the correct size; superba krill, sliced smelt, squid pieces and diced shrimp for larger fish. Juveniles will require more frequent feedings of smaller food items such as brine shrimp, mysids and pacifica krill. Unlike some other members of the anthias sub-family, Sakuras hold their coloration well in captivity, with very little fading or muting of the coloration evident when compared to fish photographed in the wild. 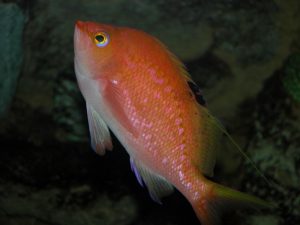 This large female Sakura is poised to turn into a male – note the pink spots on its flank that are destined to become pearly white as a male.

Sakura are not overly particular regarding water quality, doing well in even standard undergravel-filtered aquariums, as long as the pH is kept above 7.9 and the nitrate-nitrogen concentration below 50 mg/l. Their ability to tolerate lower salt concentrations (such as during hyposalinity treatments) is not known to this author, but it is probably best to keep them at normal salinity, as their deepwater habitat does not experience salinity changes, and they may not be evolutionarily adapted to this. In addition, other species of anthias are known to succumb more readily to Uronema infections when kept at lower salinity, even for short periods (Hemdal 2006).

A group of ten older adult Sakura were acquired from a public aquarium in Japan. Eight years later, three of the original fish are still alive. One fish died soon after arriving from Japan due to shipping trauma. Another was trapped unnoticed in some rocks during cleaning of the aquarium. One died from aggression from a large male and two died from fatty liver disease. Two fish died from unknown causes. Still, these fish were acquired when already older adults, so an average lifespan of more than fifteen years for this species seems a reasonable assumption. 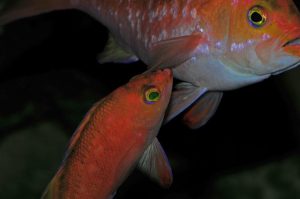 This image of a pair of Sakura shows the potential size difference between the upper male fish and the female beneath it.

Adult Sakura are usually collected by hook and line (although juveniles may be net collected). A picture on the web site of a Japanese fish supplier showed the deck of a boat with a bucket full of Sacura anthias (caught at a depth of around 50 meters in Suruga Bay) all floating at the surface like so many bright red corks. Due to the depths at which they are hooked and then reeled up to the surface, they probably needed to have their gas bladders depressurized by “needling”. The collectors must have a good technique to solve this gas bladder problem as the web page said they had gotten 85 of them rehabilitated and ready for sale. Certainly, a percentage of the fish do not survive this process, with some dying later due to latent infections. Once this issue is overcome, Sakura are very hardy in captivity, with only minor disease issues with trematodes and Cryptocaryon, no more than most other species of marine aquarium fish. 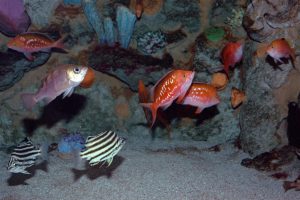 The temperate Japanese fishes exhibit at the Toledo Zoo shows a shoal of Sakura, along with two stripeys and a Sebastes rockfish.

Sakura are generally compatible with a wide variety of temperate water species; fishes as well as most invertebrates. As long as the fish are of appropriate size, they can be kept with groupers and rockfish to stripeys and catsharks – even temperate water butterflyfish such as Chaetodon modestus. Since they are plankton pickers, they also leave benthic invertebrates alone (but small shrimps would be potential prey). The only real compatibility issue seems to be that adult males may become territorial on a seasonal basis. This usually just results in some “head-butting” and the subsequent retreat of the losing male to another part of the aquarium. In smaller aquariums, this “territorial sphere” of aggression may encompass the whole tank, and the losing fish may not be able to get far enough away from the aggressor, and may need to be removed by the aquarist.

None of the other three recognized members of the genus Sacura; S. boulengeri, S. parva, and S. speciosa (Froese, R. and D. Pauly. 2009) seem to have found their way into the pet trade in the United States. These species have a more tropical distribution, but retain their affinity for cooler water by being found in those areas at a much greater depth than the cherry anthias is in the temperate waters off Japan. Of the three, Sacura boulengeri, from the North Arabian Sea to Pakistan (Moazzam 2004) is perhaps the most attractive; with a yellowish body covered in bright pink wavy horizontal striping. Another heavy bodied Anthias of a related genus, Odontanthias borbonius (the checked swallowtail or “borb” anthias) has been more commonly imported for the aquarium trade. It is a shyer species, prone to collection damage, and some tend to develop faded colors in captivity.

The Sakura anthias is a very interesting species for public aquariums willing to develop a display of temperate Japanese specimens. Now that they have become available through normal marine aquarium supply channels, they are a potential species for home aquarists as well. While not a fish for every aquarist, they are a very colorful, hardy species that may interest the rare fish collector willing to meet its basic husbandry needs.

Open Discussion: Show Us Your Blog!

Aquarium Invertebrates: A Look at the Hippopus Clams