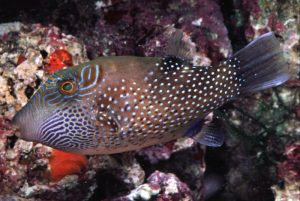 The Ambon toby (Canthigaster amboinensis) differs from its close relatives in the length of the snout and the coloration. This species is often found in the surge zone.

Reef fish posses a variety of anatomical and behavioral characteristics to help them avoid predators. Sharp spines, extreme agility, cryptic coloration, noxious body slime, and Batesian mimicry are all examples of adaptations that some fish possess to lessen the chances that they will become a meal.  But probably the most unusual antipredation adaptation possessed by reef fishes is body inflation. This is where a fish increases it’s girth by swallowing water (or in some cases air).  Several fish groups are known to possess this unusual gift, including the swell sharks (genus Cephaloscyllium), the frogfishes (Antennariidae), the porcupinefishes (Diodontidae) and the pufferfishes (Tetraodontidae).  Apparently, by increasing their size these animals reduce the chances that a predator will be able to ingest them, or by suddenly inflating they might startle a would-be predator, or make themselves difficult to extract from a reef crevice.

I have long “had a thing” for one group of these “inflatable fishes.” These are the puffers in the genus Canthigaster (known commonly as the tobies or sharpnosed puffers). There are approximately 32 species in the genus Canthigaster. One of the most spectacular of these is the Papuan toby (Canthigaster papua). For a long time C. papua was considered synonymous with the ocellated or bluespotted toby (Canthigaster solandri). Now there are a number of ichthyologists that recognize the two as distinct species. Canthigaster papua is known from the Philippines, Indonesia, New Guinea and Australia, while C. solandri is more wide-ranging, having been reported from east Africa east to the Hawaiian and Line Islands. Another very similar species, the pearl toby (Canthigaster margaritata), is restricted in distribution to the Red Sea. 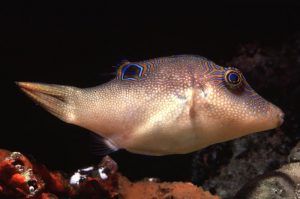 The fingerprint toby (Canthigaster compressa) is not as common in the aquarium trade as these similar congeners. The husbandry of all these species is similar.

The two species differ in coloration. The Papuan toby is brown overall with blue spots on the side of the body, blue lines on the back and the dorsal surface of the caudal peduncle, a black spot at the base of the dorsal fin and orange on the underside of the snout. The ocellated toby has spots on the side of the body, on the back and caudal peduncle, with some lines radiating from the eyes, and has no or little orange on the ventral surface of the snout, head or belly. Both species typically have orange on the tail, but C. papuensis usually sports more orange. The Papuan toby is probably sexually dichromatic and dimorphic. In the closely related C. solandri the males attain a larger size and typically have fewer, larger spots than females. There also appears to be some size and color differences between the sexes in the Papuan toby.

These two tobies are found at water depths from 1 to 34 m (3 to 118 feet) in depth, generally in areas protected from strong water movement, around coral heads, rocky reefs, sea grass meadows, pier pilings and in a number of different reef habitats (e.g. fringing reefs, lagoons around patch reefs, on the back and fore reef).  In Micronesia juveniles are said to be more common in shallower, more protected areas than adults. These tobies feed most on algae, followed by an array of benthic invertebrates, such as tunicates and small crustaceans.  Tube worms, foraminiferans, fish parts, and coral are also consumed to a lesser degree.  They are reported to neatly nip off the tips of small-polyped stony (e.g. Acropora spp.) and alcyonarian corals with its strong fused teeth. These tobies can be observed singly, in pairs, or in groups on the reef. Adults are often seen in pairs, but are likely haremic like many other tobies. 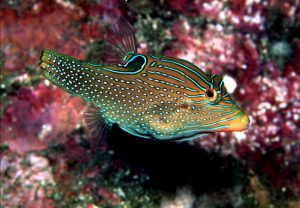 The Papua toby (Canthigaster papua) is one of the most attractive members of the genus.

Both the Papuan and ocellated tobies are excellent aquarium inhabitants. The only possible drawback with these tobies is that some individuals will nip the fins of other fishes. You may not see them doing the nipping, only the results of it – circular bite marks on the fins. Fortunately, most individuals do not engage in this undesirable behavior. When they do nip tankmates, they most often assault long-finned fishes, like comets, bannerfishes, batfishes and tangs. Tobies are rarely aggressive towards other fish species, with the possible exception of congeners. The Papuan and ocellated tobies are territorial fishes, with males excluding consexuals from their territories. Therefore, individuals (especially males) may fight with each other if placed in the same tank. It is possible to keep a male with a female together in a larger aquarium (e.g., 100 gallons or more).

Toby fighting usually begins with bouts of displaying, where the combatants increase their apparent size by erecting a ridge on the back and belly. They perform these lateral displays to try and drive their opponent away with out actually coming to blows. But, if one individual does not back down and leave the area biting will usually ensue. This can result in severe injuries. The problem with captive combat, is that the fish that retreats cannot “leave the area” since our aquariums are so much smaller than the normal toby territory and hence this subordinate is chastised by the more dominant, or territory holding fish. If it gets to the point where biting occurs you will need to separate the fish or risk losing one of them to injury. You could try taking the dominant fish out of the tank and placing it in a different aquarium for a week or two, and then try adding the more aggressive fish back into the tank and see what happens. In some cases the subordinate will accept its position in the pecking order from the onset and avoid the more dominant fish. In these cases lethal fighting usually does not occur. 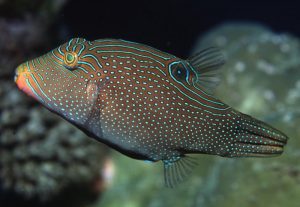 Canthigaster papua has long been considered a color form of C. solandri. Note the differences between this photo and the shots of C. solandri below.

Tobies will eat a wide variety of chopped, fresh seafood, flake foods and frozen preparations. It is very important to feed these fish at least twice a day, especially in tanks that lack plant growth or sessile invertebrates. If fed any less than this, these fishes will loss weight. Tobies do best when housed in a tank that has an abundance of fleshy or filamentous algae, on which they can browse throughout the day. Because they are omnivores, it is important to include sufficient quantities of plant material in their diets, including algae, spinach, dried algae and frozen and/or flake foods formulated for herbivores. Tobies should also be housed in a tank with some hard calcareous decor that they can nip at or the aquarist can add a small piece of live rock now and then for them to chew on. This will help ware down their teeth, which will continue to grow and can get so long that they interfere with their normal feeding behavior.

Both the Papuan and ocellated tobies are excellent aquarium inhabitants. The only possible drawback with these tobies is that some individuals will nip the fins of other fishes.

If a specimen shows chronic, abnormal distention of the abdomen it may be suffering from an internal infestation of nematode worms of the genus Philometra.  Unlike normal toby inflation, the distended abdomen of fish suffering from this infection will be asymmetrical in form and will change shape as the parasites move around.  Schleser (1994) recommends introducing Fenbendazole (add at a volume of 1% of the active ingredient) to gelatin based foods to eradicate intestinal worms. 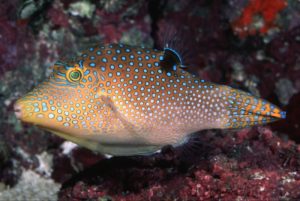 An adult male ocellated toby (Canthigaster solandri) can be a very beautiful beast. Even though it has been known to eat SPS corals in nature, some aquarists have successfully kept in reef aquariums.

Members of the genus Canthigaster (known commonly as tobies) have been kept in larger reef aquariums. For example, Bruce Carlson in a article written for public aquarists on reef displays, listed tobies as a potential inhabitants for the reef aquarium. Gregory Schiemer also reports having kept C. papua in a reef tank without incident. But these fishes do occasionally feed on SPS corals in the wild, as well as other ornamental invertebrates. For example, I have seen C. solandri bite off the feeding tentacles of Christmas tree worms (Spirobranchus spp.), the tips of serpent star arms, the skin knobs of sea stars and the spines of sea urchins. Therefore, if you add a toby to your reef tank, be aware that there is a possibility that they may damage sessile and motile invertebrates. One important thing to remember, is that they are less likely to cause problems if you feed them frequently (e.g., two or three times a day). One way to provide a more constant food supply, and possibly prevent them from biting your ornamental invertebrates, is to regularly add some of the freeze-dried algae sheets in a lettuce clip.

Although it can break the ice at parties, provoking your toby to inflate is not a good puffer maintenance practice.  This will stress your fish and it could prove to be fatal if your toby ingests air. Tobies sometimes have difficulty expelling air from the stomach and end up bobbing helplessly at the water’s surface.  Another word of warning; these fish are not strong swimmers, so make sure all siphons tubes have strainers or small specimens may end up in your power filter. 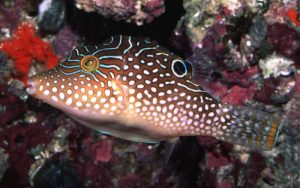 A smaller C. solandri beginning to preform an aggressive display. Note the partially erected ridge on the ventrum.