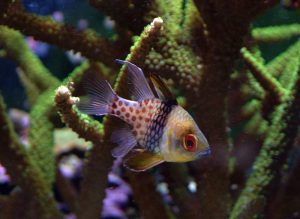 I‘ve always been fascinated with ribbon eels of the genus Rhinomuraena. These are the sleek colorful eels that are commonly found in the aquarium trade under the names blue, black and yellow “ribbon eel” ( Rhinomuraena quaesita ). They are hard to resist with their bright colors and seemingly menacing attitudes. Over the years I’ve purchased these eels on a few occasions but I’ve never been able to maintain them successfully. In fact, I could never even get one to eat in captivity. I tried everything, including small freshwater livebearers, grass shrimp, krill, crabs and even live damselfish! The fish always acted interested and “hungry” but never ate. I suspect that part of the problem is the method of collection, since they almost exclusively originate from the Philippines. There are people that claim to have maintained these ribbon eels for a period of time, but these are the rare exceptions to the rule. My suggestion is to avoid these eels until we get some assurances that they’re being collected responsibly and handled properly along the supply chain.

Having struck out with the “common” ribbon eels, I turned my attention to the white ribbon eel ( Pseudechidna brummeri ). It is also a “moray eel” belonging to the Family Muraenidae. This species is equally attractive to me as an aquarist because of its small maximum size (40 inches) and serpentine appearance. I didn’t have any luck finding one in the aquarium trade until I stumbled upon one at a local aquarium store. In fact, the store owner had forgotten about the eel, which had been thrown into a live rock holding tank six months previously! I assumed that the eel was healthy and eating in captivity, since it had been alive for such a long time under somewhat questionable conditions. I took it home and placed it by itself in a 12 gallon established quarantine tank. Within one day, it was eating frozen krill from a feeding stick! I had my ribbon eel at last! 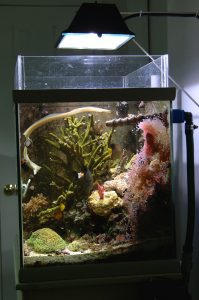 The author constructed this 4 inch acrylic guard to keep the White Ribbon eel ( Pseudechidna brummeri ) from climbing out of the aquarium.

As the name implies, the white ribbon eel is an overall white in color but has black pepper-like spots around the face and head. It has a continuous, relatively tall, dorsal fin that stretches from the head through the tail. When the fish moves in its distinctive snake-like pattern, it resembles a “white ribbon,” hence the common name. Similar to other moray eels, the white ribbon eel lacks scales and produces copious amounts of body slime. This makes it more difficult for ectoparasites to gain a foothold and provides some protection against scrapes from the sharp rocks and sand.

Although not common in the aquarium trade, the white ribbon eel enjoys widespread distribution in nature. It’s found primarily in lagoonal areas of coral rubble and sand from the Western Indian Ocean of East Africa, north to Taiwan and south to Fiji in the South Pacific.

As far as I know, there is no food data analysis for the white ribbon eel, but based upon my experience with it in captivity, it has a predilection for krill, suggesting that it primarily eats crustaceans. In fact, this is about the only food that it eats with gusto. I’ve gotten it to eat small silversides and pieces of clam on occasion, but most often it turns its nose up at these foods. I now keep it in the same 42 gallon reef aquarium with six Pajama Cardinal fish ( Sphaeramia nematoptera ), and they’ve co-existed for many years. The eel could have easily picked off these cardinal fish if it wanted to, so this suggests to me that it’s not piscivorous. I also recently added a small yellow algae blenny ( Atrosalarias fuscus ) and the eel ignored this fish as well.

The literature indicates the white ribbon eel is a loner and the sexes cannot be distinguished, so I wouldn’t recommend mixing more than one in an aquarium. The maximum length of this eel is listed at forty-inches, but it attains a circumference of less than one-inch, so it’s not a large eel by moray standards. I have not noted any differences between juvenile and adult specimens. 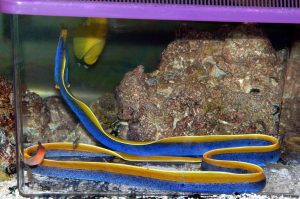 Pictured is the Blue Ribbon eel ( Rhinomuraena quaesita ) in a feeding cage. The store owner is trying to entice the eel to eel by offering live guppies and a Fire Fish ( Nemateleotris species).

Given its relatively small size and limited activity, the white ribbon eel can be kept in an aquarium as small as 30 gallons; although I would recommend that the aquarium length be at least 20 inches. If you plan to use a substrate, it should be fine calcareous sand, since the eel often travels along the bottom and may injure itself on the typical crushed coral substrate. I’ve come across references that the white ribbon eel buries itself in the substrate. In my experience, this is untrue and a sand substrate is optional. The rest of the aquarium should be decorated with live reef rock. While this eel isn’t strong enough to displace large rocks, I’d still recommend a stable and secure rock structure with lots of nooks and crannies. The white ribbon eel doesn’t like to be exposed, except for its head, and will spend most of the day with its body inside the rock structure. Since there is the possibility that the eel will escape the aquarium, I’d suggest either covering the aquarium or building a lip around the perimeter. I don’t like covering reef aquariums, so I chose to build a four-inch acrylic guard around the perimeter of the aquarium. This has proven to work very well and my white ribbon eel has never left the aquarium. I’ve seen pet stores keep their eels in partially filled aquariums. This accomplishes the same goal, but you lose water volume. I prefer my method. 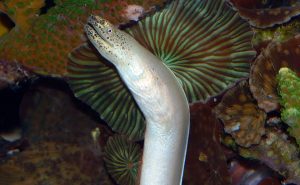 This picture of the White Ribbon eel ( Pseudechidna brummeri ) clearly shows the black-pepper markings on the face.

There are no specific lighting requirements for the white ribbon eel. I’ve kept mine under power compact fluorescent lights as well as 250 watt metal halide lighting and the eel did equally well. My eel aquariums have always been maintained as reef aquariums with a specific gravity of 1.025 at an approximate temperature of 78 degrees Fahrenheit.

Similar to other moray eels, the white ribbon eel hunts for food primarily by smell rather than by sight. Although it can be kept in the typical reef aquarium, it can’t compete for food with typical reef fish. It’s important that the eel be individually fed at least three times a week. I feed my eel by holding pieces of frozen krill in Eheim tongs. The eel quickly locates the food and snatches it from the tongs. I usually feed 3 to 4 pieces of krill up to 3 times per week. In order to vary its diet, you can also try frozen silversides and pieces of squid, shrimp, and clam. I’ve found that when my eel is hungry it will cruise the aquarium. After it’s been satiated, it will return to the rock structure. Live grass shrimp can also be used to entice a finicky white ribbon eel to begin eating in captivity. Eels occasionally go on hunger strikes, especially when they are disturbed or if the water quality is sub-par. This can last for weeks. Keep offering frozen krill every other day until it develops an interest in eating again.

The white ribbon eel can be kept in the same reef aquarium as most reef fish but may eat small crustaceans. My eel shared an aquarium with a peppermint shrimp ( Lysmata wurdemanni ) for almost a year before the shrimp disappeared, and it has never harassed the hermit crabs, sea stars or cucumbers that share its tank. I also have a Regal Angelfish ( Pygoplites diacanthus ) and Scopas Tang ( Zebrasoma scopas ) in the same aquarium without incident. I’d be concerned about keeping this eel with trigger fish and large angels ( Holacanthus species) for fear that they will pick on the eel. I also wouldn’t put any larger and more aggressive moray eels in the same aquarium. 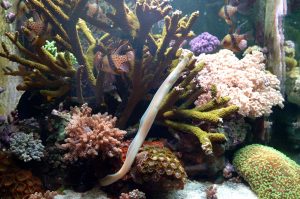 The White Ribbon eel ( Pseudechidna brummeri ) in the author’s 42 gallon reef aquarium in 2003.

When purchasing a white ribbon eel, look for a specimen that is eating at the store! This is of primary importance. Also look closely at the tiny eyes and be sure that they are clear. Although this eel is not prone to infection by ectoparasites, I’d still recommend keeping it a quarantine aquarium for 6 to 8 weeks. This not only helps you deal with potential health issues outside the main display aquarium, but it gives the eel a chance to adapt to captive life and prepared foods without the stress of other fish. I’ve found that the Eclipse System 12 gallon aquarium makes and excellent quarantine tank. It’s completely enclosed and all the filtration is built in. I was even able to add a small 25 watt heater into the filtration chamber, so there was nothing but one siphon tube visible in the aquarium. 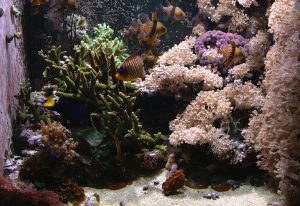 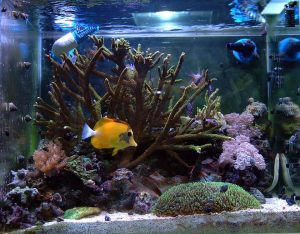