So many wrasses, so little aquarium space! Yes, I am a “wrasse” man! This amazing family of fishes contains some of the most spectacularly attired of all fishes. The family is the second largest fish family found on coral reefs, with over 500 species. Not surprisingly, its members are quite diverse in form and behavior. The labrid family album includes everything from Lilliputians to behemoths! Many of the smaller wrasse species are well-suited to the home aquarium.

In this article, I would like to examine one labrid species that has recently been showing-up in the aquarium trade with greater regularity. This fish, which is known as the whitebarred or mystery wrasse ( Pseudocheilinus ocellatus ), has all the characteristics of an ideal aquarium fish. It is hardy, it is beautiful and it can be kept with a wide-range of tankmates, including many different invertebrates. Let’s start our examination of P. ocellatus by looking at some general information about the genus. 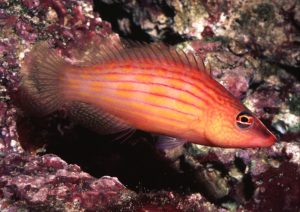 The eightline wrasse is one of the more common members of the genus Pseudocheilinus in the aquarium trade.

The genus Pseudocheilinus is comprised of seven small, colorful species. All of these diminutive fishes are relatively secretive, remaining under ledges, in large crevices, among rubble or amid the branches of stony corals. Because of their small size, they are a potential target for many predators, hence their wary natures.

Like other family members, these wrasses are diurnal. But unlike some of their relatives, they do not bury at night or when danger threatens. Instead they seek shelter in reef or rubble interstices. When stressed, these wrasses will form a mucus cocoon when they slumber. Although data on the sexuality and mating systems of the Pseudocheilinus spp. are lacking, there is some indication that at least one species may change sex with a change (from female to male) in social status. 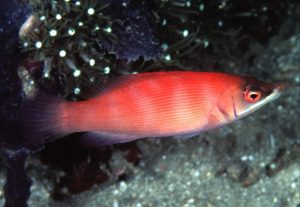 Like others in the genus, the secretive wrasse (Pseudocheilinus evanidus) is a small, secretive species that is well-suited to life in the home aquarium.

Food habit data is available for two species. The eightline wrasse ( Pseudocheilinus octotaenia ) feeds primarily on small crabs and other crustaceans, mollusks, tiny sea urchins and fish eggs. The more diminutive sixline wrasse ( Pseudocheilinus hexataenia ) feeds heavily on small benthic crustaceans (e.g., shrimp and isopods), but it also feeds on foraminiferans (which are minute, shelled protozoa). It may also serve as a facultative cleaner, nipping parasitic isopods and copepods off of the fins and bodies of other fishes. I have seen P. hexataenia clean the giant moray eel ( Gymnothorax javanica ) in the Red Sea and have seen them do this in captivity on a number of occasions. The Pseudocheilinus spp. will also eat zooplankton.

This wrasse has been known to divers, underwater photographers and even scientists for over a decade. It is a stunning fish that is so different from its congeners that there is no way that it could be confused with them. Pseudocheilinus ocellatus was originally observed in the Coral Sea. (The first photo I ever saw of this fish was in Randall, Allen and Steene (1990) Fishes of the Great Barrier Reef and Coral Sea.). It was only described and received its official scientific binomial in April, 1999. (It is not uncommon for scientists to take a while to describe a new species of fish.) 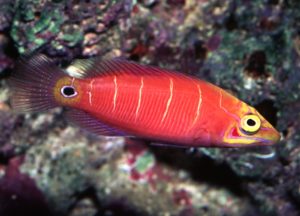 The young whitebarred wrasse sports distinct white lines on the side of the body. Note the beautiful markings on the head.

The colors of this fish are truly remarkable! The chromatic attire also change somewhat as the fish matures. Young fish sport conspicuous white lines along the flanks. These gradually become thinner and may even disappear in the larger adults. At all sizes, P. ocellatus has a distinct ocellus on each side of the caudal peduncle. This may serve to deflect the attack of a piscivore from the vulnerable head region to the tail. (Predators usually are more successful at catching their prey if they attack the head.) The head of P. ocellatus is a fluorescent yellow with pink tattoos! It can reach a maximum length of around 12 cm (4.7 inches).

The whitebarred wrasse tends to be more common around oceanic environments, usually on clear coastal reefs or outer reef slopes. It has been reported from the Coral Sea north to the Ryukus in Japan and east to the Pitcairn Islands and Johnston Atoll. It is a resident of deep reef walls and slopes, having been reported at depths of 20 to 58 m (65 to 189 ft.). (This is one reason that this species commands a higher price than the others of the genus that make it into the aquarium trade!)

The whitebarred wrasse is not only magnificent in appearance, it is also a hardy addition to the fish-only or reef aquarium. As for any member of the genus Pseudocheilinus, it should be provided with plenty of hiding places, like caves and overhangs. When first introduced it will spend most of its time lurking among the aquarium decor. But once it acclimates to its new home (which usually occurs relatively quickly if there are no larger, more aggressive fishes in the aquarium), it will make frequent forays into the open. I have had P. ocellatus leap out of an open aquarium when they were being harassed by other fish. They might also jump out of the aquarium when the lights are turned-off.

This wrasse does not appear to be as aggressive as some of its relatives (e.g., the eightline wrasse). I have kept it with a range of fish species without incident, but have noticed and been told, that they get more aggressive as they get larger. I did see a larger specimen catch and eat small goby. Pseudocheilinus ocellatus is also likely to behave aggressively towards more docile species introduced after it has become well-established in its aquarium home. This wrasse may be harassed by other fishes. For example, I have had other wrasses chase it incessantly. I now have a smaller whitebarred wrasse in with a Pacific red-striped hogfish ( Bodianus sp.). Unfortunately, the hogfish attacks the P. ocellatus every time it sees it! The hogfish does not bother any of the other fishes in the tank, including fairy wrasses and a small pinkstreaked wrasse ( Pseudocheilinops ataenia ). For some reason, the hogfish hates the P. ocellatus! This is probably due to the fact that the two fishes have a similar shape. Many fish cue in on this characteristic when determining who to attack! (I am now in the process of trying to remove either the Bodianus or its victim from the tank). 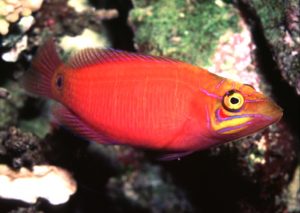 An adult whitebarred wrasse. Note the differences in color between this larger individual and the smaller specimen in the previous photo.

The whitebarred wrasse will scan live rock as it searched for smaller prey items. (Its diet is probably similar to that of the eightline wrasse as described above.) It is a minimal threat to ornamental invertebrates, including crustaceans. I have kept it with several different species of cleaner shrimps without incident. That said, I should point out that larger P. ocellatus might eat smaller shrimp species (like anemone shrimps in the genus Periclimenes ).

When it comes to feeding, provide P. ocellatus with a varied diet that includes finely chopped seafoods, frozen mysid shrimp, frozen preparations for carnivores and a color enhancing flake food. In a reef aquarium, it will only need to be fed once every other day as it will forage on micro-invertebrates on the live rock. In a fish only tank that lacks live substrate, you will want to feed it at least once a day. Once it acclimates to the aquarium, it is an aggressive feeder that can compete with most fish tankmates. However, make sure newly acquired individuals get enough to eat if housed with boisterous fishes.

The members of the genus Pseudocheilinus are well known for their habit of feeding on pyramidellid snails (small gastropods that are parasites of Tridacna clams). The parasitic snails are nocturnal, spending the day near the base of the clam or between the scutes of certain species of clams (Delbeek and Sprung, 1994). As a result, these wrasses are neither likely to encounter the snails very often nor have the opportunity to prey upon them. Delbeek and Sprung (1994) suggest manual removal is still the most effective way to rid clams of these parasites. The Pseudocheilinus spp. will also feed on noxious flatworms. That said, do not expect any of them to eradicate these pests if your tank is already infested with them!

Although you may not see this fish at your local retail store, you can find it on the internet at the Marine Center (www.themarinecenter.com) and Liveaquaria.com (www.liveaquaria.com).