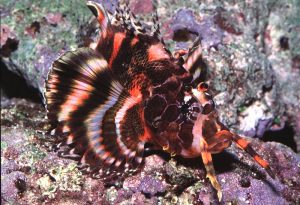 I have long been a fan of lionfishes. In fact, these fishes were partially responsible for baptism into the marine aquarium hobby over 30 years ago. I have been fortunate enough to keep all the species available in the trade. Of these, my favorite is still Dendrochirus biocellatus. This member of the subfamily, which is referred to commonly as the twinspot, ocellated or Fu Manchu lionfish, is a unique species that is less frequently seen in aquarium stores than many of its kin. The two barbels on the upper jaw and pair of ocelli on the soft dorsal fin set D. biocellatus apart from all of its relatives. In this article, I would like to share some of my musings, and the observations of others, on this unusual scorpaenid.

Lionfishes are members of the family Scorpaenidae (scorpionfishes) and the subfamily Pteroinae. There are six genera in this subfamily and approximately 22 species. The two genera that you most often see in the aquarium trade belong to the genera Dendrochirus and Pterois. Members of these two genera are easily separated by the form of their pectoral fins. In Dendrochirus spp. the pectoral fin rays do not reach the base of the caudal fin, they are branched and are connected by a membrane over much of their length.

The twinspot lionfish is known from Mauritius to the Society Islands, north to Japan and south to Australia. It has been reported at depths of 1 to 40 m (3.3 to 132 ft.) in lagoons, on coastal fringing reefs and on patch reefs. It is also found on outer reef faces and slopes. It tends to prefer microhabitats with rich stony and/or soft coral growth. It is a secretive species that spends the daytime hours hanging upside down in deeper crevices and caves. A diver might occasionally catch a glimpse of one of these fish moving from one crevice to another during the day. However, it is most readily observed during night dives, at which time it comes out to hunt. 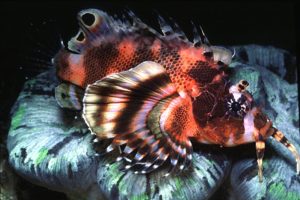 The two ocelli on each side of the dorsal fin can change color depending on the lionfish’s mood or social status.

Dendrochirus biocellatus is thought to feed mostly on crustaceans, although food habit data is lacking for this species. It exhibits an unusual behavior when it feeds. It will snap its dorsal spines and shake its head from side-to- side as it approaches its prey. This behavior may serve to distract, or possibly attract, the prey item. Thaler (2004) has suggested that the fleshy barbels that extend from the upper jaw may act to attract fish into striking distance. It often stalks its quarry by slinking along the bottom or around reef structure like a cat, and moves forward, either by “hopping” on its pelvic fins or by undulating its caudal fin. When it is about one-half a body length away from its prey, it lunges forward with amazing speed to ingest it.

The ocelli on the soft portion of the dorsal fin may serve a communicative function. They can change from black to a faded gray. This color change often occurs during aggressive interactions and courtship. In agonistic interactions the ocelli will typically fade in the dominant individual, while during courtship the spots fade in males. Thaler (2004) reports that the ocelli can take on a turquoise color and that the eyespot adopts this color when the fish is excited (whether by food, a mate or a competitor). 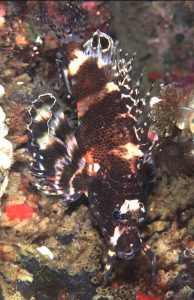 A twinspot lionfish off Batangas, Philippines hanging upside down under a patch reef overhang. This is the darker color form.

The twinspot lionfish is considered to be the most difficult member of the subfamily to maintain. This is due to the fact that they can be reluctant to eat anything but live food. The best diet you can provide for D. biocellatus are ghost shrimp. You should gut pack these (feed them a nutritious flake or frozen food) before you feed them to you twinspot lionfish. I have yet to have an individual that would not eat these crustaceans. However, I have not had much success getting D. biocellatus to accept nonliving foods, including bits of food on the end of a feeding stick. So before you purchase a D. biocellatus, make sure you have access to ghost shrimp. Juvenile twinspot lionfish will also eat live brine shrimp. You should feed your twinspot lionfish several of these shrimp every other day.

Feeding a twinspot lionfish in an aquarium that contains other aggressive feeders can be a problem. Therefore, potential competitors, like groupers, soapfishes, snappers and triggerfishes do not make good D. biocellatus tankmates. This lionfish may have difficulty getting anything to eat with these more aggressive gluttons. You may have to present ghost shrimp to the twinspot lionfish in a fine meshed fish net. Place the shrimp in the net and move it slowly toward the area where the lionfish is hiding. With time, this lionfish can usually be trained to swim to the net opening and snap up the shrimp inside. This method is also effective for feeding this fish in a reef aquarium. Large angelfishes, triggerfishes, pufferfishes and porcupinefishes can also cause problems when kept with D. biocellatus. They have been known to nip the fins of this fish.

This lionfish will do better in a smaller tank where they are kept on their own than in a larger community tank where feeding them can be difficult. Adult twinspot lionfish can be kept in tanks as small as 20 gallons. It is imperative to provide this secretive fish with caves, crevices and overhangs in order for it to properly acclimate. I have had even had specimens hang upside down under the heads of large leather corals.

Adult twinspot lionfish will eat smaller members of their own species and larger specimens (presumably males) will behave aggressively toward conspecifics. When displaying the fan-like pectoral fins are extended forward, the dorsal spines are erected and the body quivers. Smaller individuals will usually flee when a larger individual display, but threats may escalate into fighting if both fish are similar in size and one specimen does not back down. In this case biting and dorsal fin jabbing may occur, which can result in torn fins, scale loss, damaged eyes and even death if the fish are not separated. If you keep more than one twinspot lionfish in a larger aquarium (e.g., 70 gallons or more) they will usually avoid each other, but in smaller aquaria dominant specimens often stalk and injure subordinate conspecifics. 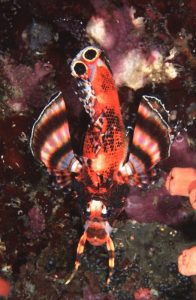 A beautiful twinspot lionfish in the field. This is a reclusive species that is rarely seen in the open during the day.

It is not uncommon for lionfish lovers to want to keep more than one member of this subfamily in the same tank. It is possible that other Dendrochirus spp. will fight with D. biocellatus. This is especially true if both individuals are male or if one congener is placed in the aquarium after the other. Although these encounters are usually limited to lateral displays, gill cover flaring and head shaking, if one individual does not back down they may bite each other. I have seen the shortfin lionfish ( Dendrochirus brachypterus ) grasp the head of an opponent in its mouth and vigorously shake it from side to side. This behavior can result in damage to the jaws of the fish that is attacked. Individuals may also bite the flanks of congeners or ram each other with their venomous dorsal spines. Although a lionfish stung by another will usually not die as a result, it can cause temporary distress, including an increased respiration rate (as much as 3 times its normal rate) and decreased swimming activity. If one lionfish is persistently attacked by another they should be separated or the subordinate individual may cease feeding and end up dead. Another thing to be aware of when keeping more than one lionfish in the same aquarium is that larger lionfish have been known to prey on smaller individuals.

Like all the lionfishes, D. biocellatus is suitable for a reef tank if you are not interested in keeping shrimp and smaller fishes, especially benthic species like gobies and blennies. This lionfish is less of threat to more active fish species than its relatives due to its slightly smaller mouth and unique hunting behavior. Do not expect to see your twinspot lionfish much if your aquarium is replete with live rock. Smaller specimens tend to be more secretive than adults are and some larger individuals will come out into the open as they become more accustomed to aquarium life. The best way to view these fish in a reef aquarium is to place a red fluorescent or incandescent bulb over the tank at night.

All the lionfishes are venomous. An injection of venom from the fin spines can cause intense pain and swelling. For this reason, it is important to be very careful when ever you place your hands in your aquarium. Make sure you know where your lionfish is before moving aquarium decor or equipment. If you are stung by your twinspot lionfish, immediately immerse the wound in hot, nonscalding water (from 43.3 to 45 ºC, or 110 to 113 ºF, for 30 or 40 minutes or until pain has diminished) or heat it with a hair dryer. The heat will denature the protein that constitutes the venom and prevent it from spreading through your body.

Although the twinspot lionfish is more demanding than some of its relatives, this fish can make a fascinating addition to the species tank or reef aquarium. Happy fish-watching!