Many reef fish groups have been ascribed with “colorful” common names, that are in many cases quite descriptive. For example, there are the hawkfishes, which perch on reef substrates, their are the cowfishes, which have horns and big sad eyes, there are the hogfishes, which have swine-like appetites, there are lionfish, which have elongate fin filaments reminiscent of the mane of their feline namesakes, and there are stonefish, which simply look like a stone. But what about the soapfish- where does their name come from? Although they don’t look like a typical bar of soap, they do lather like it! Almost all the soapfishes exude a toxic skin mucous when they are distressed. A lather is formed when a soapfish’s skin is stroked, hence the common name. This substance, which is known scientifically as grammistin, is bitter-tasting and an effective deterrent against potential soapfish predators. 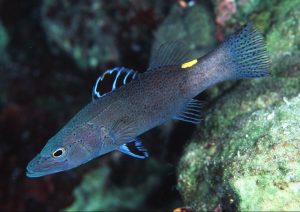 Note the characteristic sharp-snout, the elongated body and yellow spot on the caudal peduncle of this Arrowhead Soapfish.

The soapfishes belong to the family Serranidae (the groupers or sea basses). The soapfishes make-up the two tribes Diplioprionini and Grammistinae. These two groups include nine genera and 23 species (three genera and four species in Diplioprionini, and eight genera and 21 species in Grammistinae). Members of the Diplioprionini tribe have a dorsal fin that is deeply notched or two dorsal fins. Most of their scales are also ctenoid in form. The genus Diplioprion (tribe Diplioprionini) is comprised of two very unique soapfishes. They are laterally compressed, with deeper bodies than all of the other soapfishes, and they have very long pelvic fins that extend back beyond the front of the anal fin. Unlike most other soapfishes, these two species are active during the day, spending much of the diurnal hours cruising just above the substrate, or hanging under ledges or in caves. When they hunt they adopt a head down posture as they inspect the sea floor. One of the Diplioprion (i.e., yellowface soapfish, D. drachi ) increases its hunting success by swimming alongside larger fishes, using them as a mobile blind to sneak-up on its prey. I have seen the two-banded soapfish ( Diplioprion bifasciatum ) following foraging coral catfish ( Plotosus lineatus ). The soapfish would pounce on small prey items flushed by the feeding catfish. The members of the genus Diplioprion are thought to be sexually dimorphic, with males attaining a larger size than females. Although very different in form, the monotypic genus Belonoperca is also a member of the tribe Diplioprionini.

The soapfishes are durable aquarium inhabitants, but few are highly regarded by hobbyists because of their subdued color patterns and secretive tendencies. This is unfortunate, because all the soapfishes exhibit interesting behavior and will usually “warm-up” to their keeper in time. The size of the tank used to house a soapfish will depend on the species you are interested in keeping. Some of the smaller members of the group will do fine in tanks as small as a standard 20 gallon, while others should be kept in nothing less than 55 to 75 gallon aquariums. 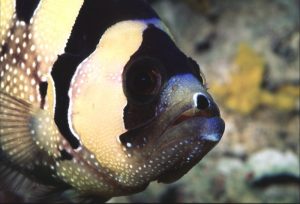 Although not all are brightly hued, the soapfishes are very interesting to watch in the home aquarium. The attractive face of the leaflip soapfish is shown here.

Most members of this group do spend the majority of the daylight hours hiding among the aquarium decor, occasionally slinking from one crevice to another. Therefore, it is very important to provide them with plenty of suitable shelter sites. After being in the tank for a while, most soapfishes will learn to recognize their keepers as a source of food and become quite tame. Although it may be necessary to induce feeding by offering these fishes live food, like feeder fish and ghost shrimp, most are easily trained to accept bite-sized pieces of fresh or frozen seafood, frozen preparations, and frozen mysid and brine shrimp. When they feed, some soapfishes will simply dart out from their lair, grab the prey item, and then dash back to cover. While others approach their prey slowly, and perform unusual swimming motions as they make the final approach.

Although most soapfishes will behave aggressively towards conspecifics or congeners, they are rarely aggressive towards non-related fish species. They are, however, very predatory and may surprise you in what they are capable of ingesting. The biggest downside to soapfish ownership is the potential risk they pose to their tankmates because of their toxic body slime. If they are being harassed by a tankmate, or the aquarist, or if they are ill, they might secrete copious amounts of grammistin, which could result in the death of the soapfish and any other fish in the tank. Fortunately, this happens very rarely in the home aquarium. The only time I have seen this occur is when a Rypticus sp. was handled and then placed back into a tank. If you do notice fishes kept with a soapfish breathing heavily or behaving abnormally, remove them from the tank, and separate them from the soapfish, immediately. When capturing a soapfish use a specimen container as this is less stressful to the fish. The spines on the preopercle and opercle are also susceptible to getting tangled in an aquarium net. 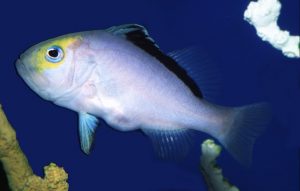 The yellowhead soapfish is endemic to the Red Sea. Like others in the family, it employs some fascinating hunting techniques to sneak-up on its quarry.

This unusual soapfish is rather rare in the aquarium trade. However, it make a very interesting aquarium inhabitant for those hobbyists that enjoy the unusual. As the name implies, the head comes to a sharp point and the body is elongated. Unlike many in the genus, this fish looks like it is built for speed. It also differs from other soapfishes in its behavior. It spends the days hovering in the water column, usually hanging under overhangs and in caves or at the entrances of these structures. At night, it moves from its diurnal shelter to feed on fishes and crustaceans. This species is known from East Africa to Samoa, north to the Ryukus and south to New Caledonia. I have found it to be quite common in northeastern Papua New Guinea. It reaches a maximum length of 15 cm (5.9 in.)

The arrowhead soapfish is a secretive aquarium inhabitant that should be provided with suitable microhabitat. It is best to provide B. chabanaudi with a sizeable arch, overhang or cave to hover under or in. Otherwise it will spend much of its time rest on its pelvic fins on the bottom, behind aquarium decor. Although it rarely displays interspecific aggression, it is a voracious predator that will eat any fish or shrimp small enough to fit in its mouth. It slowly approaches its prey by undulating its dorsal and anal fins and then, with incredible speed, it will swoop down and capture its quarry. The arrowhead soapfish will consume feeder fish and live ghost shrimp, but, unfortunately, it is not easy to switch over to non-living foods. It may take mysid shrimp that are strategically placed in a current so it looks like they are moving on their own. If you are not able to switch your arrowhead soapfish to a more nutritious diet, make sure you “gut pack” the ghost shrimp with a nutritional food source before you feed them to your Belonoperca. 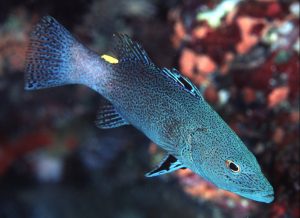 The arrowhead soapfish is a solitary species that tends to stay under or in caves during the day.

Only one arrowhead soapfish should be kept per tank, but it can be kept with related forms (i.e., other soapfishes, groupers). It can be housed in a shallow or deepwater reef aquarium, however, it may spend more time in the open in a more dimly-lit environment. It will also eat ornamental crustaceans. Be aware that this species is an excellent jumper and is likely to launch itself out of an open aquarium if it is startled or being harassed by tankmates.

This is one of the more common soapfishes in the aquarium trade. Its color can be quite variable. Most two-banded soapfish are pale to bright yellow with a thin black band on the head that runs through the eye, and a thick black band in the middle of the body. Some individuals are black overall with yellow on the median fins and yellow margins on the pelvic fins. I have only seen the black color morph around Heron Island on the Great Barrier Reef and it may be that this is an aggressive mimic of the common Queensland yellowtail angelfish ( Chaetodontoplus meridithi ) – this species is often referred to incorrectly by hobbyists as the Personifer angelfish ( Chaetodontoplus personifer ), which is restricted in distribution to north western Australia. Both species are deep-bodied and the coloration of the black morph of D. bifasciatum and this angelfish are similar overall. The angelfish feeds on sessile invertebrates and fish eggs, while the soapfish eats small fishes and crustaceans. On the southern Barrier Reef, the proposed model (i.e., the angelfish) is much more common than the mimic. For example, of eight D. bifasciatum I observed around Heron Island, only two exhibited the black color pattern. During this same observation period I observed 22 C. meridithi. Rudie Kuiter, fish expert, reports that in Java the juveniles of this species are gray with a black head and may be a Batesian mimic of a sympatric poison fang blenny ( Meiacanthus sp.). 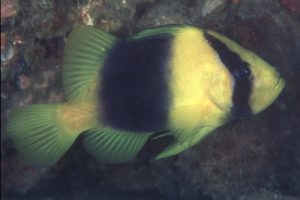 The two-banded soapfish ranges from India to Papua New Guinea, north to southern Japan and south to the Maldives and Lord Howe Island. It reaches a maximum length of 25 cm (10 in.). This soapfish is most common on coastal reefs, in calm lagoons, on protected reef faces and fore reef slopes. It can be found at depths of 1 to 25 m (3.3 to 75 ft.). On rare occasions it will also enter estuaries. Diplioprion bifasciatum is a solitary fish. During the day it is usually observed hanging in caves or under overhangs, or moving from one crevice to another. It feeds on crustaceans and small fishes. The Two- banded Soapfish spawns at dusk, with males forming temporary spawning territories on the edge of the reef. When a female approaches a male, he will begin to swim in a quick, exaggerated fashion in front of her. If the female is in spawning condition, the male moves above her with his head angled upward slightly. The pair will then rise up into the water column until they are from 7 to 14 m (23 to 46 ft.) above the substrate, at which time they will rapidly turn, release their gametes, and dash back toward the ocean floor.

The two-banded soapfish is well-suited to captivity. It may hide when initially introduced to its new home, but usually within hours they will start swimming about the tank. You should make sure you provide plenty of suitable hiding places for D. bifasciatum. This species will eat finely chopped fresh sea food, frozen brine shrimp, frozen mysid shrimp, frozen preparations, and even flake food. Occasionally live guppies are necessary to induce a feeding response in some individuals.

The two-banded soapfish is not aggressive toward other fishes, but they will eat any tankmate that they can swallow whole. These fish can be kept together, rarely behaving aggressively towards each other. They may be picked on by overly aggressive tankmates. They may release grammistin, a toxic substance exuded from the skin, when stressed or frightened. This can kill it and the other fish kept with it in the aquarium.