The genus Aiptasia contains several species of tropical anemones, which are found throughout the world. These anemones, similar to many other cnidarians such as reef-building corals, have formed a mutualistic symbiosis with dinoflagellate algae known as zooxanthellae (Venn et al. 2008), which translocate photoautotrophically produced organic compounds to their host. Next to making use of light, Aiptasia feed on a wide range of particulate organic matter, ranging from copepods and Artemia nauplii to dried fish feed. 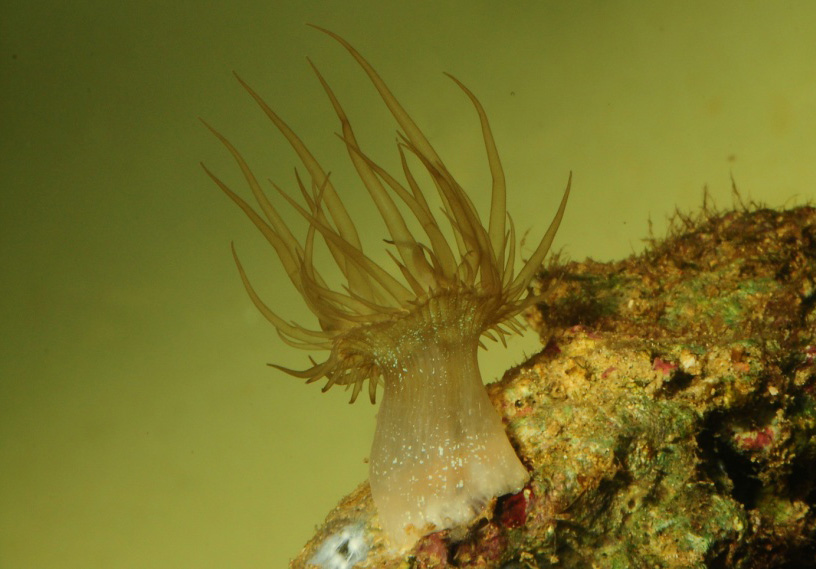 Aiptasia, armed with powerful nematocytes, are the Nemesis of many aquarists.

As Aiptasia have both autotrophic and heterotrophic feeding modes, these coelenterates thrive in well- and poorly-lit habitats as well as under complete darkness, provided that sufficient food particles are available. For example, completely bleached anemones have been reported growing in PVC pipes, solely relying on heterotrophy. Moreover, Aiptasia can tolerate large swings in temperature, pH and salinity, and survive in live rock exposed to air for some time.

In addition to their resilient nature, Aiptasia can reproduce very effectively in aquaria.Aiptasia spp. mainly reproduce asexually through a process called pedal laceration (Hunter 1984), during which parts of the pedal or basal disc break off which subsequently regenerate into new, smaller anemones. These new clones increase in size until they are perfect copies of their parent anemone. Their sexual reproduction entails the release of gametes (ova and sperm), after which fertilized ova develop externally into planula larvae (Chen 2008). These planula or propagules may settle on any substrate. Growth of Aiptasia usually is prolific, and they may outcompete other invertebrates if their populations are not controlled. Their potent nematocytes often damage and kill neighboring invertebrates, including corals, in a quest for space. These abilities make Aiptasia the Nemesis of many aquarists, which is why both chemical and biological methods are used to eliminate them.

Recently, I observed the settlement behavior of an Aiptasia sp. (possibly Indo-Pacific A. pulchella) in the laboratory, where this species grows in oligotrophic coral aquaculture systems. Individuals settled on cyanobacterial mats, which in turn grew on the aquarium glass, PVC, pumps, corals and gastropod shells. With two exceptions, no Aiptasia settlement was observed on surfaces without cyanobacteria. This preferential settlement of an Aiptasia sp. on cyanobacterial mats suggests a symbiotic relationship between the anemone and bacteria. This symbiosis may be based on translocation of nitrogen, in the form of ammonia or ammonium, from cyanobacteria to Aiptasia. To further clarify this, I will briefly address the symbiosis between different types of cells found in cyanobacterial mats, also called a bacterial consortium. 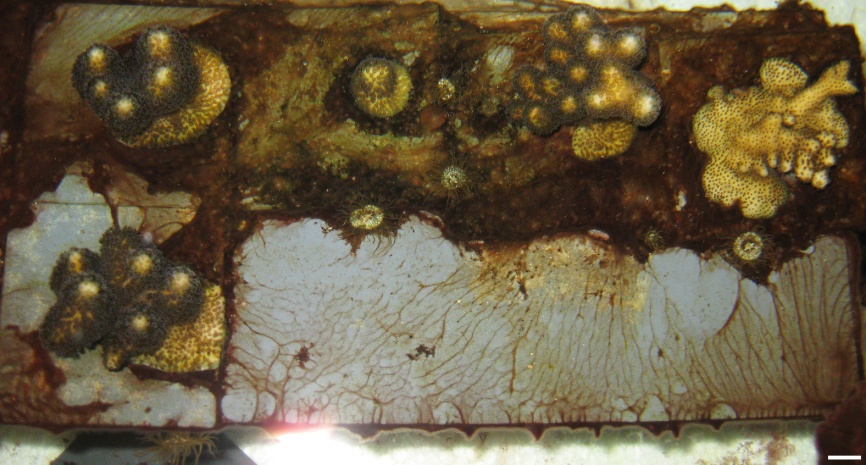 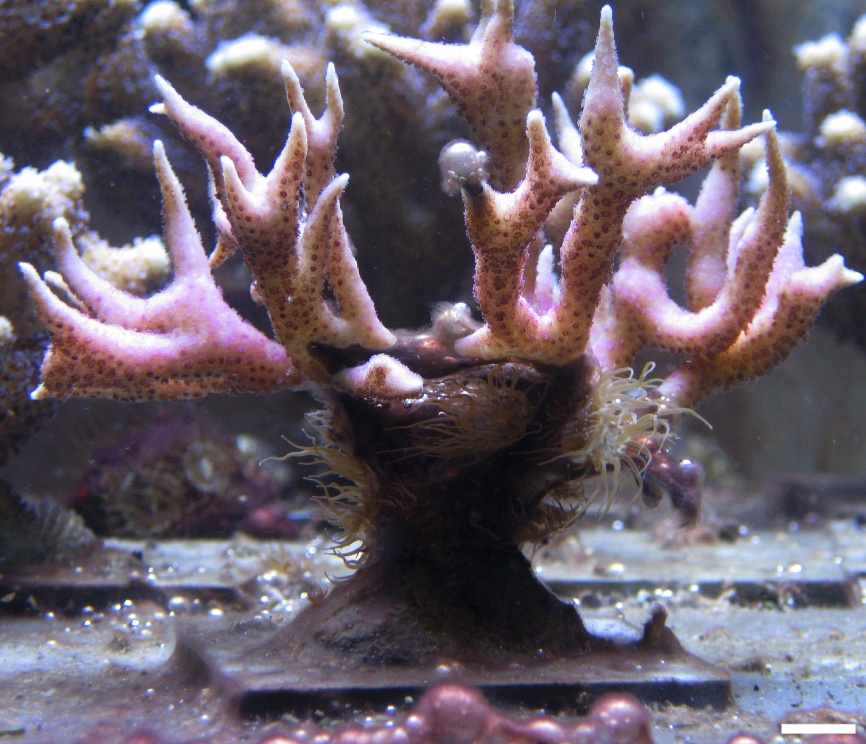 Cyanobacteria are capable of diazotrophic growth, which means they are able to convert or fix dinitrogen gas (N2) into ammonia (NH3) using the enzyme nitrogenase (Postgate 1998). Ammonia, in turn, is further assimilated as the amino acid glutamate (glutamic acid), an example of biosynthesis. Glutamate can be converted to other amino acids and proteins, a so-called metabolic pathway which is important for organismal growth. Nitrogen fixation is hampered, however, by the presence of oxygen. Cyanobacteria have solved this problem by making use of heterocysts, specialized bacterial cells that are protected from the photosynthetic oxygen produced by the bulk of the cyanobacteria in the mat by multiple cell walls (Fay 1992). Heterocysts fix and translocate nitrogen as ammonia to the photosynthesizing cells of the mat, whereas these latter cells provide the heterocysts with organic carbon. In this way, the consortium of cyanobacterial cells is able to convert carbon dioxide (CO2) and dinitrogen gas (N2) into organic compounds for growth. This strategy allows cyanobacteria to overcome nitrogen-limitation, enabling them to grow in an oligotrophic environment with low levels of nitrogen. Examples are Anabaena sphaerica and Nostoc punctiforme. 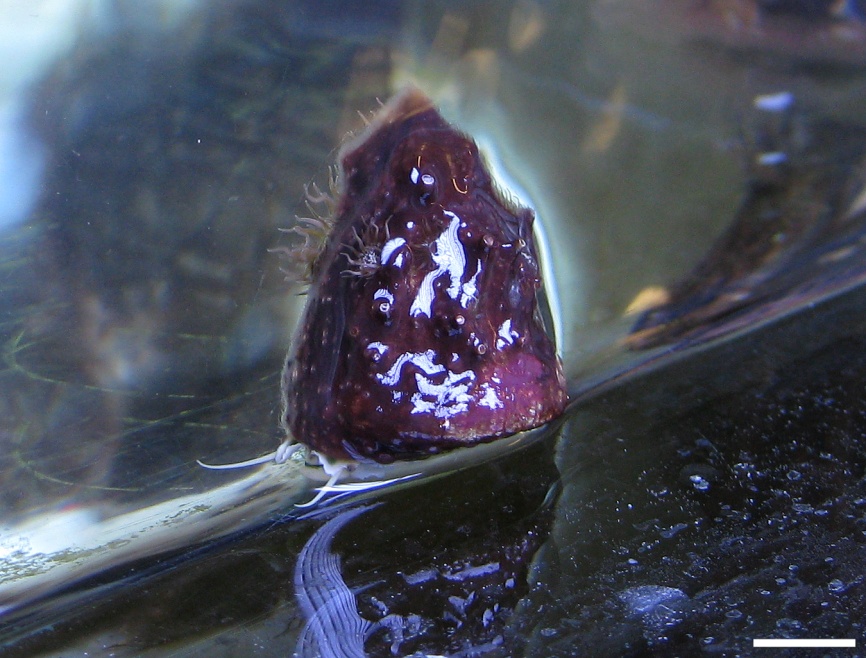 In a very similar way, Aiptasia may also become nitrogen-limited. These anemones have overcome carbon limitation by forming a mutualistic symbiosis with dinoflagellate algae, which supply them with organic compounds (or photosynthates) such as glycerol produced from photosynthesis. These photosynthates may, however, be deficient in nitrogen, requiring supplementary nutrient uptake for growth (Houlbrèque and Ferrier-Pagès 2009). Corals have gone a step further by associating with cyanobacteria, in this context referred to as zoocyanellae, next to zooxanthellae. Intracellular nitrogen-fixing cyanobacteria provide scleractinian corals with significant amounts of nitrogen (Lesser et al. 2004), from which the zooxanthellae directly benefit. The same strategy, the formation of a three-way symbiosis between an animal, dinoflagellate algae and bacteria, may have been adopted by anemones from the genus Aiptasia. Instead of, or next to harboring intracellular zoocyanellae, Aiptasia spp. may use free-living cyanobacteria as symbionts. More specifically, the ectoderm (or skin) of the anemones may physically interact with heterocysts living in cyanobacterial mats. The ammonia (NH3) produced by heterocysts may be absorbed through the ectoderm of the animal. It is known that Aiptasia take up ammonia from the external environment, after which it is assimilated into glutamate by the anemone’s cells and its symbiotic zooxanthellae (Stambler 2011 and references therein), in the same way as in cyanobacteria. Although glutamate can be converted to proteins for growth, the anemones require ammonia as a precursor, which is usually present in low concentrations only. In this perspective, settling on cyanobacterial mats may be beneficial to Aiptasia: ammonia produced by cyanobacteria may be taken up by the anemone through the aboral ectoderm of the basal disc or column. This would provide these anemones and their symbiotic zooxanthellae access to both autotrophically fixed carbon and nitrogen, allowing Aiptasia spp. to grow rapidly in a nitrogen-limited environment, just like their symbiotic cyanobacteria. The hypothesized model below provides an overview of this symbiosis:

Hypothesized model of the symbiosis between cyanobacteria and Aiptasia spp. Heterocysts in cyanobacterial mats take up dissolved dinitrogen gas (N2) from seawater, and convert it to ammonia (NH3) with the enzyme nitrogenase (NG). Ammonia is subsequently taken up by the aboral ectoderm and gastroderm of Aiptasia, and its symbiotic zooxanthellae (depicted here as a brown sphere). Finally, ammonia is assimilated into the amino acid glutamate (GA) by the enzyme glutamate dehydrogenase (GLDH) and used for growth of the anemone and its symbiotic algae. Model based on Stambler (2011) and references therein.

This possible symbiosis between Aiptasia, zooxanthellae and cyanobacteria may explain the abundance of these anemones in oligotrophic environments, including heavily skimmed aquaria, and their preference for cyanobacterial mats as a settlement substrate. The discovery of potential symbiotic bacteria in the ectoderm of Aiptasia pallida (McKinstry et al. 1989, Palincsar et al. 1989) lends credence to the hypothesized model above, which encompasses an intimate link between heterocystic cyanobacteria and the aboral ectoderm of Aiptasia. More research will be required to confirm whether translocation of ammonia from heterocysts to Aiptasia occurs, for example by using isotope-labeled ammonia. In addition, it would be interesting to determine at what ammonia concentration this settlement behavior no longer occurs, and whether feeding (nitrogen-rich) zooplankton influences settlement choices of offspring. 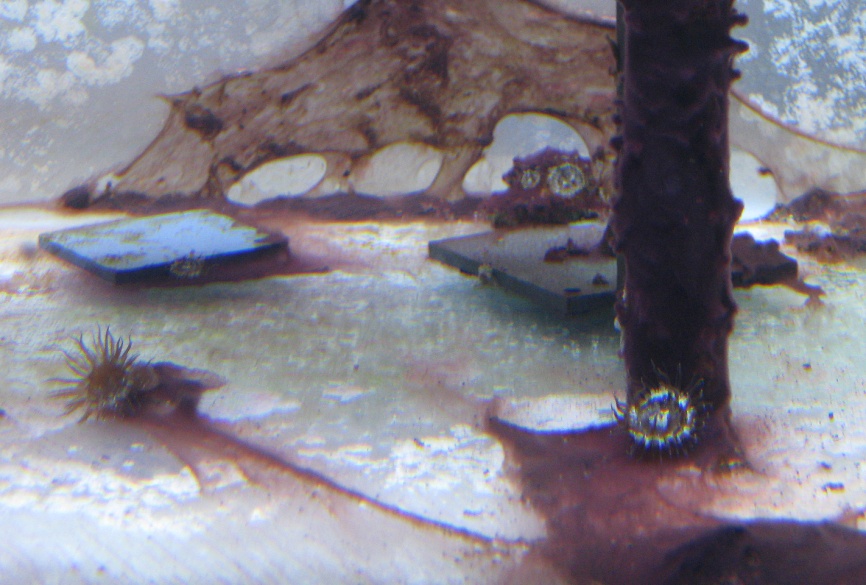 When cyanobacteria are available, and ammonia concentrations are low, Aiptasia seem to have a strong preference for settling on cyanobacterial mats.

If Aiptasia can benefit from the nitrogenous secretion of heterocystic cyanobacteria, the anemones will have to locate them. Aiptasia may be drawn towards cyanobacterial mats by chemotaxis, i.e. chemicals released by the bacteria, including ammonia, may attract the anemones. For example, when fragments of the pedal disc released by a parent anemone encounter a cyanobacterial mat, high local ammonia levels may trigger a settlement response. Subsequently, the fragment regenerates after which it may benefit from excreted ammonia by heterocysts. Whether the cyanobacteria also benefit (mutualism) or even suffer (parasitism) from this symbiosis remains to be determined. This symbiosis may be an example of commensalism, where the Aiptasia benefit whilst having a neutral effect on the bacteria.

In the home aquarium

Even though Aiptasia will settle on substrates without cyanobacterial cover, it may be helpful to minimize the growth of cyanobacteria in the aquarium, as this may promote settlement and thus survival of Aiptasia propagules. This may be especially true when ammonia, and possibly nitrate concentrations in the aquarium are low, i.e. nitrogen-limiting to Aiptasia growth. It is not yet clear at what ammonia concentration the uptake of this nutrient is no longer limiting the anemones in their growth, however this is likely to lie above average ammonia concentrations of marine aquaria. Using GFO to maintain a low phosphate concentration of the aquarium water may aid in the prevention of cyanobacterial mats, and in turn, may somewhat retard asexual reproduction of Aiptasia.

Either way, Aiptasia will probably always be considered an aquarium pest. In my opinion, these creatures are fascinating, having formed an intricate relationship with dinoflagellate algae, and possibly cyanobacteria, allowing them to make use of the sun’s energy and dissolved nitrogen gas next to plankton. When predators such as certain Butterflyfishes (Chelmon rostratus) or Peppermint shrimp (Lysmata wurdemanni) are introduced in the aquarium, Aiptasia populations may be kept under control. In such cases, these anemones can be an interesting addition to the aquarium rather than a nuisance.