Many of us, especially in the early days of reef keeping followed what was called the “Berlin Method,” which recommended the reef tank with a bare bottom. It was generally believed that corals flourished in areas where the sea water was particularly pure or pristine; that is, having a very low nutrient level. Therefore, it was essential to have a bare bottomed reef tank so that uneaten food, fish waste, etc. could not accumulate on the substrate, and furthermore, any detritus falling to the bottom could be easily vacuumed up. There is no doubt that this is a workable system, but it eliminates many animals that require a substrate in order to survive – many wrasses, sea cucumbers, and the complex flora that live in the substrate. In my opinion, bare bottom reef tanks do not look as natural as tanks with reef sand, but they work well. It is possible of course to just have a thin layer less than an inch – of sand to give one’s reef tank a natural look.

If you are going to have, as I do, substrate at a depth of at least 3-inches than the ideal is to do what I used to do with Julian Sprung. We used to go out on the Florida Keys, find a pristine area, and collect plastic pails of live coral sand. Since Julian lives on the Florida Keys this was not hard to do. If, in fact, you can bring the live sand back and put it into your reef tank within a few hours much of the flora will remain alive. In those days — the days when Julian and I published Aquarium Frontiers – we also collected cucumbers and snails, making these animals the ideal way to start a reef tank. Unfortunately, this is not possible for most aquarists. When I setup my current reef tank in Portland Maine, which as many of you know is a 700-gallon system, bringing live sand from the Florida Keys was not possible. I used instead about 200-lbs of Caribsea’s fine aragonite, which is how much I needed to achieve a depth of 6-inches. See photo! 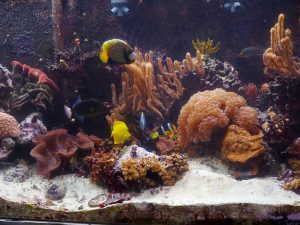 Note: It is important to thoroughly wash new substrate before adding it to the tank. And, if you use very fine “sugar sized sand” be care how your water circulation devices are pointed; they could easily blow sand all over the tank.

There are on the market many choices of substrate; here are a few images from one of the pages of one of our sponsors http://www.globeaqua.com/caribsea_sand.html. They offer many choices. 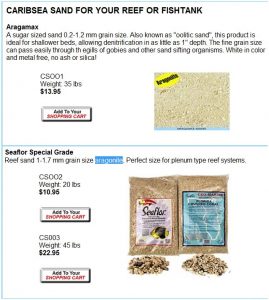 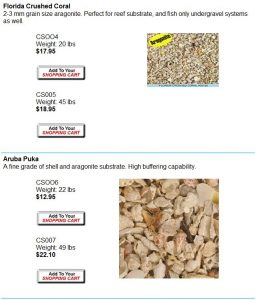 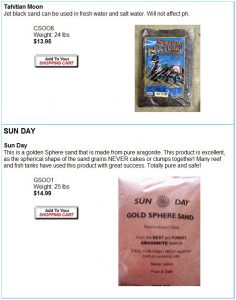 All of these substrates will work well in a reef aquarium. It is also possible to mix different types, and all will help to maintain pH, alkalinity, and calcium concentration. However, all of these substrates quickly are covered with an organic crust, decreasing their solubility, so reef keepers cannot depend on substrate to maintain the necessary chemical parameters for pH, alkalinity, and calcium. These vital elements will have to be maintained by dosing lime water and or using a calcium reactor.

Most of these substrates are shipped sterile, but in a reef tank will quickly become colonized by various flora.

Note: I believe it’s useful to regularly stir up the sand/substrate bed. For a brief time the tank will be a cloudy mess, but soon the water will clear and be more transparent than prior to the stirring. Furthermore, corals, soft and hard, will extend their polyps apparently to feed on what is released due to the stirring. Another reason to do this is that substrate without stirring can easily lump together into blocks.

At one time there was considerable interest in plenums, but following the experimentation by Toonen and Wee published here stated, “Overall, however, the presence or absence of a plenum made little difference to the performance of sediments in processing aquarium nutrients.”

Essentially, a plenum is a double bottom in the reef tank, providing a space below the sand bad that could serve as a sink for nutrients. The theory was that in the depths of the sand bed a low oxygen condition would arise, which would lead to the conversion of nitrates to nitrogen gas, thus maintaining a low nitrate level. Unfortunately, Toonen’s and Wee’s experiments conclusively demonstrated that this doesn’t work under actual reef tank conditions.

I strongly recommend readers read both parts of these experiments at,

Note: “Toonen also found that “Overall death rates were roughly twice as high in aquaria with shallow sediments as in deep sediment treatments. The highest overall death rates were seen in aquaria with shallow coarse sediments over a plenum, and the lowest death rates occurred in aquaria with a sandbed composed of deep coarse sediments. The treatments that were closest to the design aquarists employ for deep sandbed, Miracle Mud and Jaubert plenum aquaria had intermediate death rates. The shallow coarse sediment design that is closest to that used in Berlin systems had one of the highest death rates, and the deep coarse sediment design for which there is currently no accepted name had the lowest overall mortality (Fig. 10). We did not test bare bottom tanks, but the data clearly suggest that the shallower the sediment, the higher the mortality rate, and you can’t get much shallower than a bare bottom tank!”

Miracle mud is the most recent addition to the choices for substrate. I have never tried it myself, but there are some who make positive claims for it. However, it is expensive and from what I have read from those who have or are still using it, it is no better than an aragonite sand bed. However, it has not been studied in the experimental way that Toonen and Wee studied plenums and sand beds. In any case, for those reef keepers who want to try it while holding down costs, it can be used to inoculate a sand bed, or by using it in a sump.

Following is a picture of my reef tank showing the 6-inch deep aragonite sand bed. 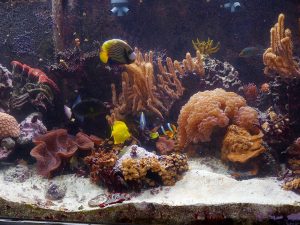