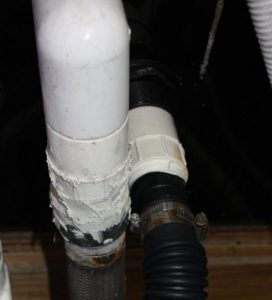 The exhaust on the right eliminated one 90 degree angle.

Irony: Before getting to this column’s subject – temperature control – I think it important to tell readers about what happened to me regarding plumbing two weeks ago, when I came home to find about 90-gallons of water on the floor by my reef tank. The water level in the display tank had fallen about one inch to the top of the overflow, and the returns where blowing some water but mostly air bubbles in the tank. When I went into the room behind the tank where the sumps are located I discovered that they were near empty. So, I immediately began looking for the leak; my biggest fear was that the display tank had sprung a leak. I couldn’t find one, so next I checked the plumbing, and couldn’t initially find one. Near panic, I forced myself to stop and think. It was then that I realized that I had last month in this column talked about making sure that the return(s) from the display tank had enough capacity to handle the amount of water coming from the pump returning water from the sump(s). Because my Hammerhead pump returns almost 5000-GPH I use 4 returns leaving the overflow box. It was here that I discovered the problem, and ironically it was just what I had written about. Two of the returns were clogged, but by what? I shut all the valves and took the returns apart to find out. In the elbow of two of the main returns were snail shells, with accumulated “stuff” around them, effectively blocking water flow. The result was that the remaining two exhaust pipes could not handle the incoming water from the Hammerhead pump and the display tank overflowed. Murphy got me again, and as is Murphy’s signature: it was at the worst possible time. I was away for the weekend. This will not happen again because I closed the top of the stand pipes inside the overflow with tops drilled with holes small enough to prevent anything large enough to get in and block the flow. I’m also in the process of removing the return elbows: see picture! 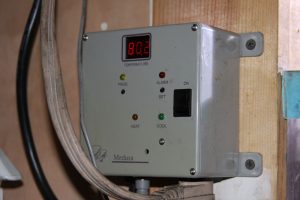 The fortunate thing is that my tank and associated equipment is in the basement, with the result that the water did not damage the concrete floor, and because I always have at least 100-gallons of salt water in vats ready for the next water change I was able to get the system up and running normally without any loss of life.

The animals we keep in our reef tanks are cold blooded, and up to a point, require that we maintain a constant temperature. Notice that I said up to a point! Having kept marine fish for over 40-years I have learned that healthy fish can tolerate a temperature swing of 5-degrees Fahrenheit over a 24-hour period. This is an important consideration when considering some of the techniques I will suggest for controlling temperature during the hot summer months. This is much less of a problem in the winter season when the desired temperature is maintained with a heater’s thermostat. I’m certainly not suggesting that you take a fish in 80-degree water and throw in into 70-degree water; what I’m saying is that if the tank’s water is 80-degrees in the day time, when the lights are on, it can drop 5-degrees overnight without harming the fish and invertebrates. And, if you’re using fans blowing on the water’s surface to cool the water via evaporation during then day, when the lights are on the temperature will drop at night when the lights are off, and the room temperature is lower. To minimize this effect I use a device to turn on the fans only when the temperature rises to a certain level. See photo! 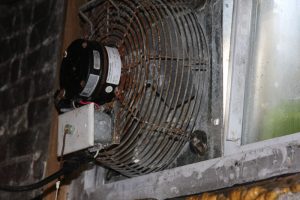 Exhaust fan blowing air out of the aquarium room.

This controller can control the heater, fans, air conditioner or chiller. The two pictures following that of the controller is of the exhaust fan and the fan that blows on the water’s surface in the sump- aiding in evaporation.

Note: If you are relying on fans to cool the water, take into consideration that temperature efficiency by evaporation is increasingly limited as the ambient air is increasingly humid. The more water vapor in the ambient air the less it can take up. In cases like this, where the tank’s water is getting too warm it might necessitate turning off the lights or only turning them on at night when it is cooler outside of the tank. For a more technical discussion of this, check out the article, Aquarium Heat Transfer in this issue.

Note: As can readily be seen from these photographs there is another problem that marine tank enthusiasts have to contend with: rust. I generally have to replace fans every season. I have yet to find a “rust proof” fan used in a saltwater environment that is really rust proof. If someone knows of a manufacturer that makes one please let me know. 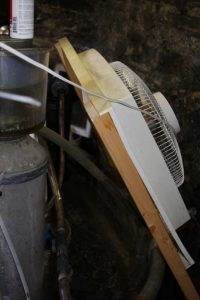 Fan that blows air across the sump aiding in evaporative cooling.

The major contributors to heat in the display tank are lights, ambient temperature, and heat from pumps, especially those that are submerged. Chillers and room air conditioners work very well, but are expensive to buy and run. Doing everything I possibly can to reduce energy consumption my reef tank still uses about $200.00 of electricity monthly. If I had to use a chiller or air condition in the basement, where the tank is located, I’m sure it would increase the electrical cost at least another $100.00 monthly. What I do is to utilize fans. I use an exhaust fan to exit hot moist air from the sump room to the outside, and I use a large fan to blow onto the sump’s water surface. If it’s a hot and humid day and my fans cannot keep the water temperature below 84 degrees I’ll only turn the large metal halides on at night, if at all. Your corals will not die if left without illumination for a few days.