Building a Small Scale Propagation System: The Mechanical Side of the House, Part II

This is part two of a three part series on building a small-scale propagation system. If you haven’t had a chance to give Part I a read, it might be helpful, as each segment will give very little background from the previous offering.

In this issue I will focus on the mechanical side of the house — all the hardware and plumbing that keeps the system running. I want everyone to see that it isn’t as difficult and overwhelming as it seems to build systems, as long as you understand and focus on the basic principles of gravity, water dynamics and the appropriate sizing of equipment. 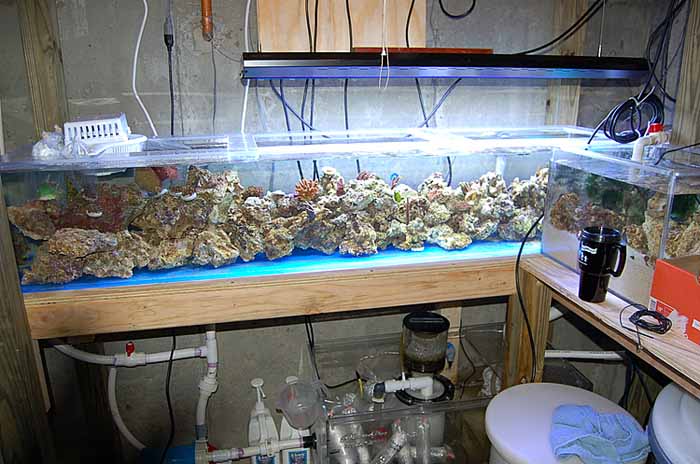 I spent a lot of time thinking, planning and reading about how to build this system, and one of the major design obstacles was that the propagation trough in the basement was going to be plumbed into my 150g. main display in the living room one floor above. The initial plan called for a total system capacity of 575 gallons, including a 180 gallon reef display that would rival my Tank of the Month in the November 2006 Advanced Aquarist. In the end, for a variety of space and practical concerns, I settled on a scaled back system with a total capacity of 275 gallons with a single return pump and gravity as the primary components for water circulation. The system features a 150g. SPS display and a 6’ trough for coral frag grow out—more than enough to accomplish my two goals of a beautiful display and a productive propagation system. 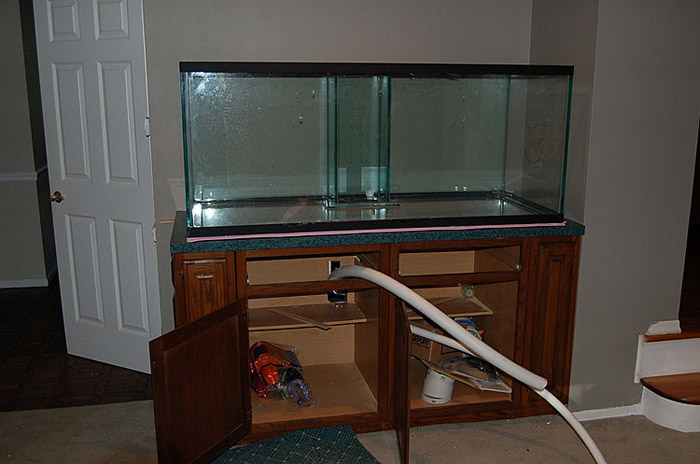 I am aware that there is some anxiety regarding plumbing with flexible PVC (SPA Flex) and PVC cement, but I am not of that school having used it successfully for years without incident. The entire system is plumbed with 1.5” drains in flexible PVC with 1” returns. The return line uses a manifold and is immediately split in two – half goes to the display and half goes to the trough. The trough line is then again split into two lines, each with its own ball valve to easily regulate the returns to the trough. I wanted to have the ability to grow high flow dependent animals in certain sections of the trough and those that require more moderate current in other areas, as well as have the ability to regulate my overflow/drain and this proved to be a simple and effective solution to both. 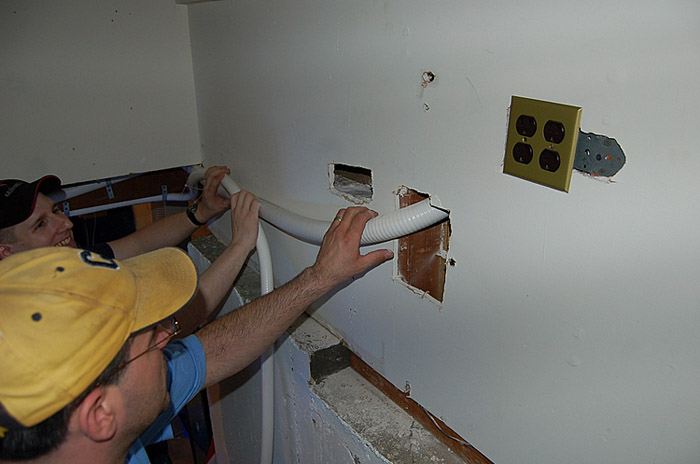 We all know that circulation is one of the keys to success in a reef system. For SPS coral propagation, it is even more critical as good circulation fuels rapid growth, coloration, and facilitates feeding and general health. Below is an outline of each section of the system. Equipment was deliberately chosen with each section’s needs in mind. As with the design of the entire system, power consumption was also a major consideration.

Display – The display has an EcoTech Marine vortech MP40W (on ReefCrest Mode) and a Tunze 6000 on a single controller to create an in an out effect when the vortech comes in and out of the highs and lows of ReefCrest. The tunze is set to 100% and 30% on 3 second intervals. The return pump line into the display is split in two with each of the locline flare nozzles going into the dead spots that the vortech and TUNZE miss. Internally, I would say there is approximately 3500 gallons per hour when both pumps hit peak intervals. 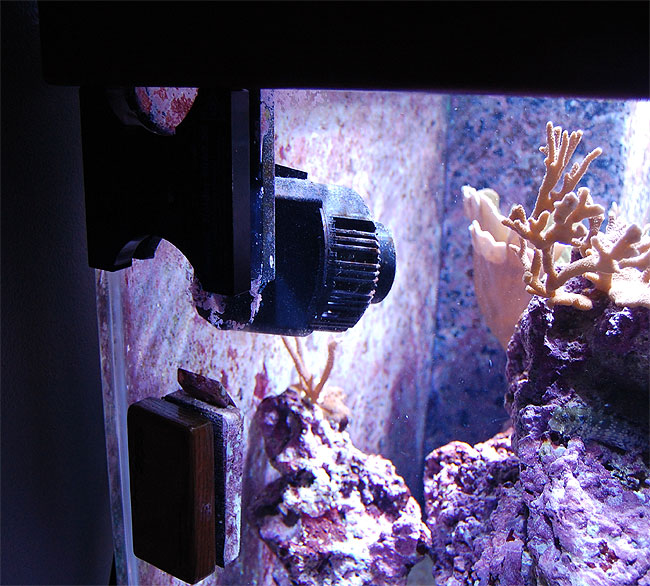 Trough – The trough is run on lower wattage TUNZE pumps and the flow is constant and not varied by any wave making devices. A tunze 6060 and a TUNZE 6080 run on opposite sides of the trough and two 3⁄4” locline returns with flare nozzles spray across the center of the trough. 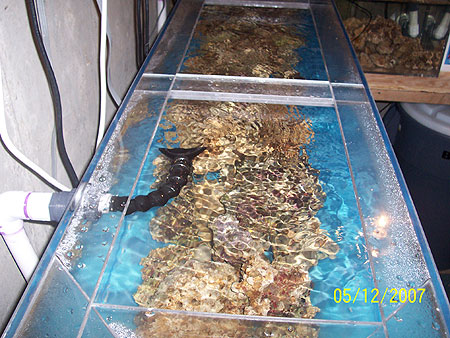 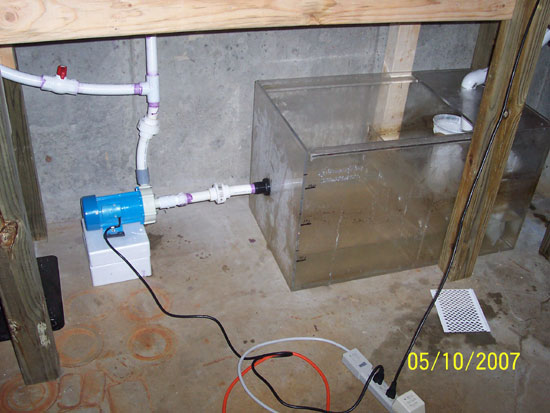 Return Pump – The return pump for the ENTIRE 275g system is a GenX-PCX 55 – which is rated at 1100 gallons per hour at 130 watts. Most believe that the majority of the circulation should be from the return pump – I am not of that philosophy – I prefer to turn over the tank at a minimum and let the internal flow do all the work. I am getting approximately 500gph to the display and 400gph to the prop system. For me, this is more than enough to be effective. 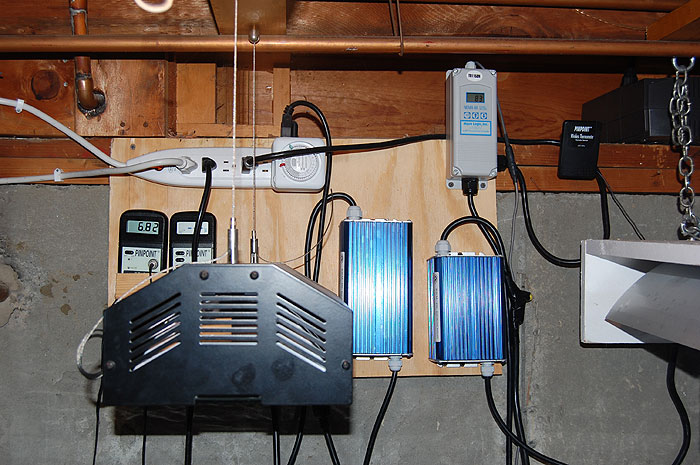 Display – The Display tank is SPS dominated and is illuminated by 3 Reef Optix III’s with individual Blue Wave III HQI ballasts that power 250w 14k Phoenix DE lamps. This lighting is the exact same system I ran on my old 180 display. 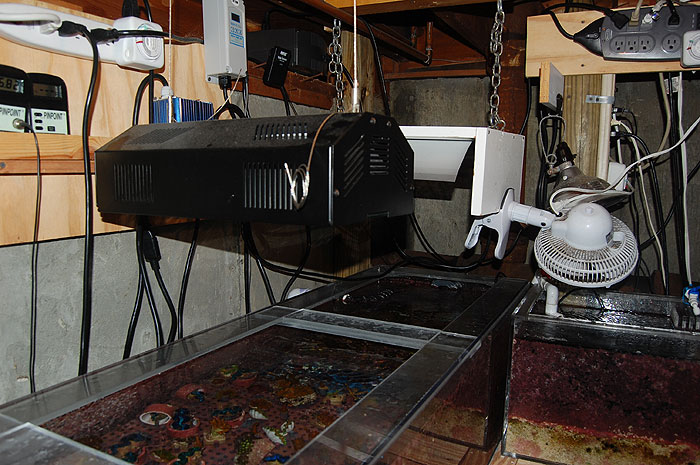 Trough – I started out with a 4’ Sunlight Supply Tek T5 lighting fixture (325 watts) using a combination of grow out (daylight) and Actinic bulbs (blues) to allow maximum growth and color with the last 2 feet of the trough illuminated by a 250w 14kPhoenix DE on an IceCap Ballast. The lighting has changed from its original design/build. This is not because I was not satisfied with the way the T5’s were growing corals out, rather I was running into problems with lifting and lowering the fixture when I needed to get into the trough and decided to replace it with 2 additional 250w halides. The system now runs on 2 250w Phoenix 14 bulbs and one 175w Iwasaki 15k SE bulb.

Temperature – The system temperature is monitored by a Pinpoint wireless thermometer with 2 probes to give me temperatures in separate sections of the system. The Monitor is set to rotate through each of the probes displaying each sections temperature every 3 seconds.

Heating – The entire system is heated by an 800w Finnex Titanium heating tube on a Ranco single controller. Temperature is maintained at 79 degrees and the RANCO has a +/- 1 degree variance. 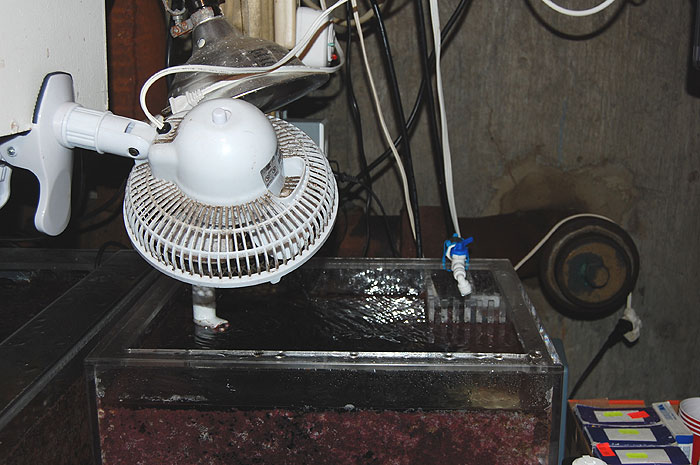 Cooling – Au’Naturale – no cooling systems are used on this with the exception of a 7” clip on fan and an occasional air conditioner on the first floor running to keep the house cool. Since the majority of the system is in the basement, that area remains cool and the system stabilizes between 79-83 degrees.

Auto Top Off – Auto top off is maintained in a BRUT 55g drum and is operated by a standard DIYreef float switch. Connected to that is an Aquamedic SP3000 single peristaltic dosing pump. 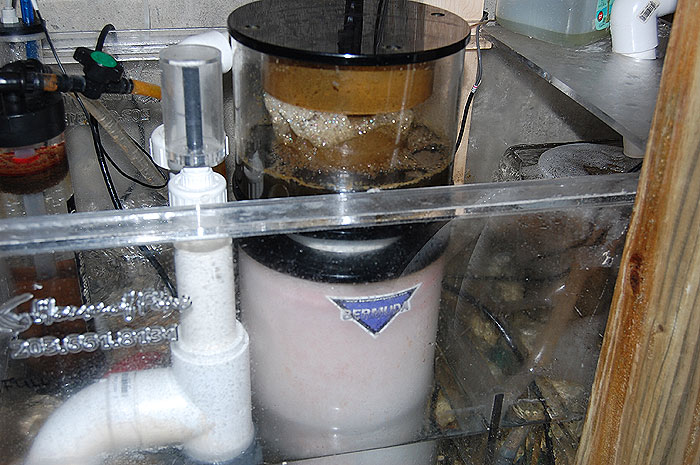 Skimmer – We practice what we preach in selling our products – all of our systems are powered by Bermuda Aquatics skimmers and this system is powered by a BPS-8c – a beast of a skimmer. Again, a very simple in-sump skimmer that is maintenance free (only emptying the cup) and energy efficient.

Filter Socks – We use standard 7″x16″ filter socks – 2 of them are replaced every week.

Phosphates – A Two Little Fishies Phosban Reactor with 150g of media changed every month keeps PO4 at less than 0.05 ppm. 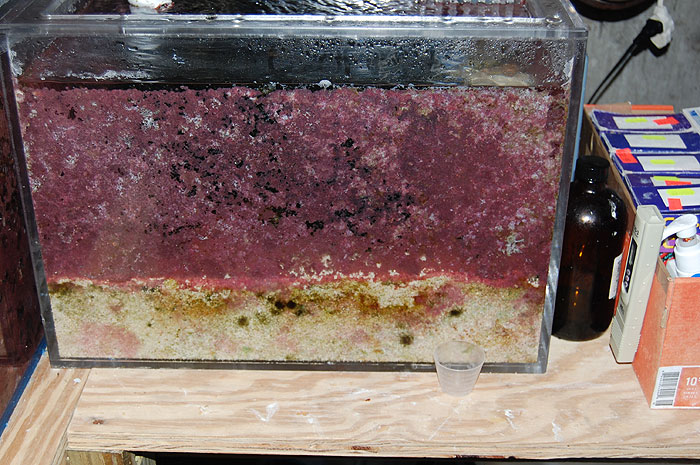 Refugium – The refugium is an acrylic cube 18″x14″x14″ and houses my remote 6″ deep sand bed as well as gallons of Chaetomorpha macro algae for exporting nitrates and phosphates. If the sand bed ever crashes, I can simply disconnect the refugium, dump it, replace the sand and start over again – safe and easy.

That is really it folks. The system has been up since May 2007 and received it’s first animals in June 2007. We have been through 5 cycles of harvest on certain corals since then, and are getting ready for some nice pieces to become available. To give you a sense of the growth we are observing, we have had a 1” Acropora nana frag grow into an 8” colony and 1/4” frags of sunset Montipora have turned into colonies several inches in diameter.

In the next and final installment in this series, we’ll take a closer look at the animal husbandry, growth and harvesting particulars that are employed.

Till then, happy harvesting.