Chemistry And The Aquarium: The Salifert Boron Test Kit

In a recent article I described in detail various attributes of boron in the reef aquaria.1 These attributes include providing pH stability and the potential for toxicity from excessive boron. One of the issues with boron is that it provides alkanity that is detected by standard alkalinity test kits,2 but that is not directly beneficial to organisms for calcification.3 Consequently, if boron levels are greatly higher than in natural seawater, the interpretation of total alkalinity tests as carbonate alkalinity is confounded. Since carbonate alkalinity is one of the most important water parameters in maintaining reef aquaria, knowing that the boron levels are not causing interference in alkalinity tests is important. 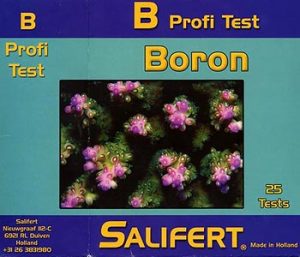 Towards this end, Seachem developed a borate alkalinity test kit that I reviewed in a recent column.4 In short, it seemed to significantly overestimate the alkalinity contribution from boron, and the need for an accurate boron kit still exists.

Salifert has taken a different approach using different chemistry in their boron test kit. The remainder of this article is a review of that kit.

Boron In Seawater And Aquaria

In natural seawater, boron is present at about 4.4 ppm total boron. My aquarium, and the Instant Ocean salt mix that I use seem to run significantly higher (6-8 ppm). I don’t consider that difference to be important, or at least not requiring any action on my part. I would only recommend folks do anything about boron if it were very low (less than about 3 ppm where you loose any buffering that the borate provides) and higher than about 15 ppm, where it can begin to cloud the interpretation of total alkalinity tests and approach the point where it can become toxic.

So that is the standard that I’m setting for evaluating the usefulness of this test kit. While great precision and accuracy are desirable attributes of any test kit, it is not especially important in a boron test kit (relative to, say, a calcium kit where an uncertainty of 33% might be a critical problem).

The test kit itself is about in the middle of the pack in terms of complexity. It is not as easy as many kits, but not as complicated as certain kits. There are reagents present for at least 10 measurements, and in most cases where boron is not excessively high, many more. The process is roughly as follows (detailed directions are available from Salifert at their [web site][23]):

Each drop of titrant amounts to 0.5 ppm boron. I could easily match the color to within 2 drops, so the uncertainly of the titration itself is about +/- 0.5 ppm or so. The color continues to change on overshooting the titrant, so it is clear (at least to me) when enough was enough.

Be sure to carefully follow the directions about which reagent to titrate with. While the directions are perfectly clear, I actually titrated with the wrong one on two different occasions, resulting in the color never changing.

One other comment. The first kit that I obtained was identical to the ones that I tested, except that it had apparently been sitting around a store for a long time (years perhaps). One of the reagents (B3) can go bad by reacting with atmospheric carbon dioxide, and it had done so in my kit. Habib Sekha has indicated that when that happens, the reading for boron can rise. In my case, it rose so much that I never found a color endpoint, indicating very, very high boron.

This issue was discussed publicly with Habib, and he confirmed by lot number that the kit was old. Other folks in the discussion had new kits or old ones. Those that had old ones were provided with new ones at no charge. Habib sent two kits to me to permit my tests to be finished. Normally I like to buy kits for reviews from stores rather than get them directly from the manufacturer, but Habib frequently does this for his ordinary customers, so I accepted them for further testing.

Nevertheless, one is left with the concern that some of the kits may be old, and that aquarists have no simple way to know that (short of contacting Salifert). I know that Habib is incorporating expiration dates on some of his kits, and perhaps he will do so on future batches of this kit.

Finally, I do not actually know how the Salifert kit works, so I can’t enlighten you with any chemical tidbits on the various reagents in it.

In both of these cases, I determined the amount of boron present by ICP (Inductively Coupled Plasma) using the method of standard additions, with additions of 3.4 and 7.8 ppm boron using a commercial boron standard. I also checked the results with a home made standard using sodium borate dissolved in water, and the results were close enough to be acceptable (the differences between the standards, and the differences between results obtained at different emission wavelengths account for the ranges shown in the ICP results). Both samples had boron elevated over natural levels (4.4 ppm). The sample from my aquarium had 5.5-6.5 ppm boron. The Instant Ocean sample had 7-8 ppm boron.

To get a low boron sample, I took the two samples and diluted them by 50% with RO/DI water. I did not measure the boron in these samples by ICP, but rather assumed that they were half of that before the dilution. Note that the kit does not claim to be able to correctly read such samples.

Finally, I took a portion of the Instant Ocean sample and spiked it with borax (sodium borate decahydrate) to a total of 100 ppm boron to get a very high borate concentration standard (The directions say the kit cannot accurately test fluids at such a high concentration of boron, but I wanted to test it anyway).

I then determined the total boron using the Salifert Boron test kit. The results are shown in the table below. The high boron sample was tested following the directions for very high boron samples, which use half of the usual water sample size. The Salifert directions suggest that if the pH is at the high end (above 8.3) or low end (below 8.1) of the acceptable test range for the water sample (7.9 – 8.5), then you can apply a 10% correction to the final value (down for low pH, up for high pH).

Note also that none of these samples were filtered before any of the tests. I’ve not noticed differences in boron ICP readings of 0.2 micron filtered samples in the past, but if any of the boron were tied up in particulates, it would be detected by ICP, but not by this test kit.

The ability of this kit to accurately measure boron is not perfect, as can be seen from the data. Some samples were off by as much as 30%. My ability as a professional chemist using an $80,000 instrument was also not perfect given the time I spent on it (about the same as using the kit), as evidenced by the range of values for each standard. Nevertheless the kit performed adequately for the purposes outlined in the beginning: to permit aquarists to know when their water might be unusually low or high in boron, and to allow them to do something about it.

The very high boron sample was a happy surprise. The kit claims it is only good up to 40 ppm, but apparently it can be used at higher concentrations. In the low resolution/high boron test mode the aquarist uses half of the usual water sample. In that situation, each drop accounts for 1 ppm, cutting the resolution in half. The titration took about 100 drops, which was much of the kit. Nevertheless, it indicated an essentially correct answer despite not claiming to be accurate above 40 ppm. This fact will allow users of Seachem salt (typically about 50 ppm)5 to gain a reasonable understanding of how much boron they have in their aquaria, and to adjust alkalinity interpretations accordingly.

Boron is an element that is not typically high on the list of maintenance requirements for most reefkeepers, and with good reason. Nevertheless, it is something that can be a concern if it is either too high, risking toxicity, or too low, creating larger pH swings than necessary. The Salifert boron kit does an acceptable job of determine whether aquarists are at risk, especially on the high side. Consequently, I’d recommend it for aquarists that are using Seachem salt mix, have used it in the past, have otherwise used additives containing boron, or who just want to be sure that they do not have a problem.

I’d also suggest that if you get a reading higher than 10 ppm, that before acting on that result, you check with Salifert to confirm that the kit is not too old. Habib Sekha of Salifert can be reached by email at habib@wxs.nl.