Clownfishes are A-list celebrities of the coral reef. PIXAR’s Finding Nemo movies helped to bring them international recognition, but the group has been a source of fascination among naturalists since the 18th century, and it’s not that hard to imagine Homo erectus staring down onto a shallow reef in wonderment as some early ancestor of the Ocellaris Clownfish flollicked about its anemone home. These colorful, pugnacious little fishes are ubiquitous within the aquarium trade, offered as a beginner-friendly option for aspiring fishkeepers, with a staggering variety of domesticated strains now commercially produced. Likewise, their bold personalities make them an equally popular attraction for divers, whose extensive photographic record will be the basis for this series of articles examining the speciation and biodiversity of their genus, Amphiprion.

For the student of evolutionary biology, Amphiprion represents a useful model organism for studying the many variables that foster speciation on coral reefs. Biogeography, hybridization, ecological partitioning, and behavioral specializations have all played their part in this group’s development over the past 30 million years or so. And thanks to the tens of thousands of photographs that exist online, no other group of marine fishes is quite so extensively and exhaustively documented in situ across the entirety of its range. With some creative Googling, it’s possible to explore intraspecific variation from seemingly anywhere in the Indo-Pacific, be it Oman or Ogasawara, along with every major reef system in between. This is a luxury that early researchers certainly didn’t have, and it allows for some intriguing new insights into the group’s true level of biodiversity, hinting at a plethora of species in need of taxonomic scrutiny.

In examining thousands upon thousands of photographs for this review, a repetitive pattern of regional endemism was discovered throughout the major lineages of Amphiprion, a pattern that happens to be broadly shared with many other groups of reef fishes. In a sense, this is the lingua franca for understanding how and why speciation occurs on Indo-Pacific reefs, and, more importantly, it helps to point out discrepancies in the ways we currently classify marinelife in this region, with implications that potentially extend well beyond this one genus. As we’ll see, there are instances where enormous phenotypic variety has remained hidden and unstudied, as all too often a single catchall taxonomy has been used for what more accurately amounts to a multi-species complex of regional endemics. In other instances, we’ll see how the patterns observed in one group can potentially be used to inform how we interpret the species limits of another, a sort of phylogeny by proxy. And we can even use this technique to postulate examples where past hybridization events may have had major effects on the course of Amphiprion evolution. 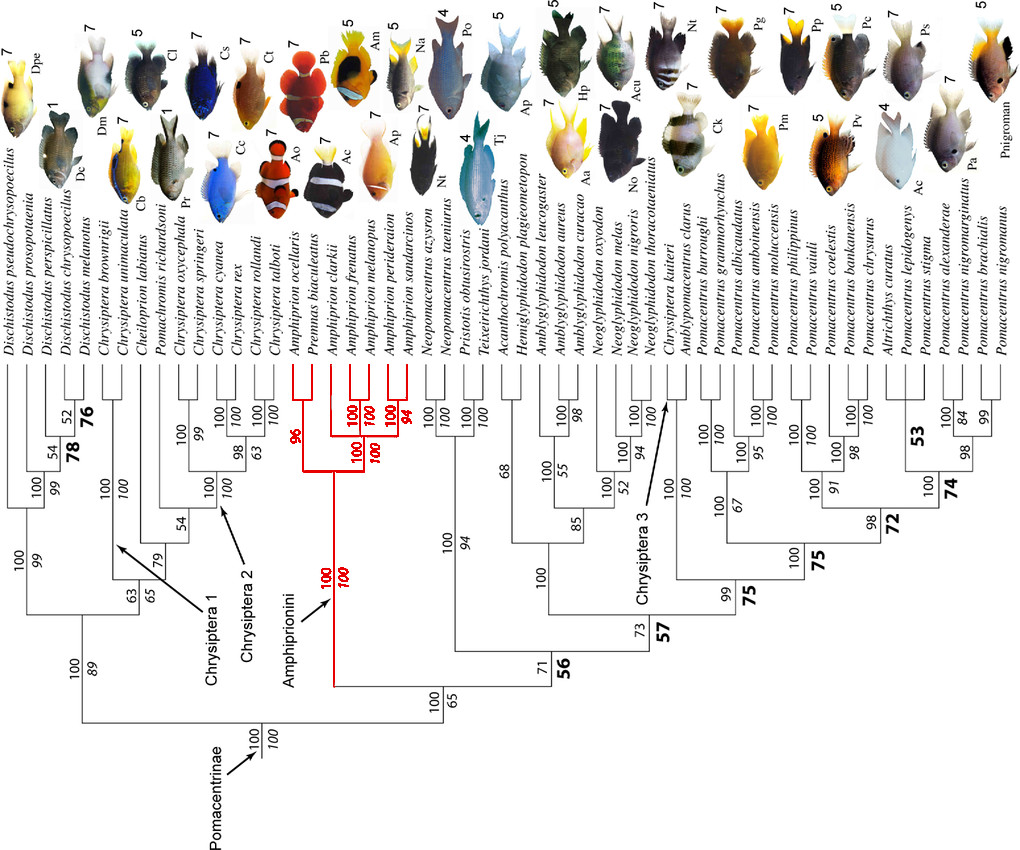 Before diving headfirst into this discussion, let’s take a step back to appreciate where Amphiprion falls in the grander scheme of fish phylogenetics. For many aquarists, it will come as a surprise to learn that these fishes are really nothing more than glorified damselfishes with an anemone fetish. The genus nestles deeply within molecular trees of the Pomacentridae, with the most recent studies placing them as a tribe—Amphiprionini—within a diverse subfamily—Pomacentrinae, composed of an assortment of familiar and unfamiliar genera: Chrysiptera, Pomacentrus, Amblyglyphidodon, etc. Atypically for damselfishes, Amphiprion has a serrated edge to both its operculum and its preoperculum, a trait that gives etymological rise to the scientific name of this genus, from the Greek amphi and prion, which translates as “both saws”.

While the symbiosis these fishes share with sea anemones is the source of their fame, there are still questions lingering when it comes to the mechanism through which this behavior functions. It’s long been known that there is an acclimation period that a clownfish goes through when presented with a potential host anemone, and it’s often been suggested that the fish is using this time to acquire mucus from the anemone to camouflage itself. However, recent research (Nedosyko et al 2014) has shown that it is instead the fish that is producing a hypodermal mucus, which serves to mask its presence. Other distantly related fish groups are also known to associate with anemones: the Banggaii Cardinalfish, the Threespot Damselfish, some juvenile wrasses, and there’s even record of a captive Personifer Angelfish that enjoyed the tentacular touch! In these, the relationship is transitory, tending to be abandoned as the fish matures. Whether these ersatz anemonefishes are using a similar mucosal protection is entirely unknown, but, at least in the case of Dascyllus trimaculatus, it seems plausible.

Taxonomically speaking, the species-level classification of Amphiprion has remained remarkably stable for much of the past 150 years. The first to be scientifically described was the Saddleback Clownfish A. polymnus way back in 1758 by the eminent Carl von Linne. By the middle of the 19th-century, the world’s fauna was fairly well-understood, with the exception of several Western Indian Ocean endemics described by Gerry Allen in a landmark revision, published in 1972. Since then, only the recognition of a couple Fijian and Samoan endemics in 2008 and 2010 has added to the genus. Thus, our present classification is based on hypotheses put forth nearly a half-century ago and which have gone largely unstudied since.

Species limits have been determined primarily from morphology and coloration, splitting Amphiprion into a handful of lineages whose precise composition tends to vary from study to study. But some major alterations appear necessary, as indicated by a series of comprehensive molecular studies published in the past decade. Utilizing a variety of genetic markers—entire mitochondrial genomes in one study—we now have strong evidence that there are major discrepancies in our understanding of this genus’ evolution. Rampant hybridization may also be muddying the picture, as some of the most exhaustive research has yielded seemingly nonsensical phylogenetic results.

An often overlooked aspect to Amphiprion evolution is the role that the host anemones likely played in driving the genus to speciate. With the exception of the polymnus Group, which specializes in lagoons and sand flats, all other clownfishes appear to be coral reef generalists, largely absent the types of ecological barriers that might otherwise help to explain their diversification. Instead, we find that competition for host anemones is likely to have both caused and curtailed the formation of the many Amphiprion lineages.

The genus can be broken down into two behavioral groups, “specialists” that make use of just one or two host anemones and “generalists” that more readily take advantage of multiple host species. But even among the specialist species, it’s not unheard of for a specimen to occupy an untraditional host anemone—what we’re looking at are behavioral preferences moreso than a truly obligate symbiosis. Aquarists understand this phenomenon well, as even a specialist species like Amphiprion ocellaris may ultimately choose to associate with a wide range of unnatural hosts in captivity, even including stony corals like Fimbriaphyllia, Heliofungia, Catalaphyllia, and Goniopora. It’s likely that the last shared common ancestor for Amphiprion—the ur-clownfish—would have been a generalist comparable to A. clarkii, with subsequent anemone specialization causing different lineages to diverge.

The most commonly used anemone species tend to have one or two clownfish groups that specialize in them. In the case of the skunk clownfishes, the shift from one host species to another has clearly driven their sympatric evolution in the West Pacific. Behavioral hierarchies are also crucial for understanding why we find certain clownfishes in certain anemones. In the case of “Heteractis” magnifica, the skunk clownfishes are behaviorally dominant and will extricate other competing Amphiprion from their home, as was shown in one experiment in which A. percula were artificially added to an occupied host (Fautin 1985). The generalist A. clarkii, despite being a much larger-bodied fish, is rarely encountered in this anemone species, likely as a result of competitive exclusion by these two specialist species, though documented examples of mixed-species groupings show that this is not universally true.

A similar situation exists with Entacmaea quadricolor, the familiar Bubbletip Anemone, in which a pair of specialist clownfish species, both of a malevolent temperament, are able to competitively exclude the equally bellicose A. clarkii. Unlike in the previous example, these two specialists don’t seem to have an innate behavioral hierarchy; rather, they generally occupy different morphs of their host. It turns out that E. quadricolor comes in one of two semi-discrete forms, sometimes suggested to represent cryptic species; one is large (~30 cm) and solitary, often found at greater depths, while the other is smaller (~15 cm) and clonal, often encountered on shallow reef flats in the spaces between branching stony corals. The maroon clownfishes are nearly always found in the large, solitary Entacmaea, while tomato clownfishes prefer the clonal variant.

Anemone generalists form three major lineages whose relationship to one another is still poorly understood. Not coincidentally, these groups have almost entirely non-overlapping ranges—African, Indo-West Pacific, Central Pacific. Their ability to make use of whichever anemone they happen to stumble upon has allowed them to fill a valuable niche, but, judging from their distribution, there is still stiff competition that has favored the development of only a single generalist lineage in most regions. The one exception is the Central Pacific, which, again, not coincidentally also lacks many of the anemone-specialist Amphiprion groups. Without the competitive exclusion provided by such groups, these generalists have been able to flourish to an extent unseen elsewhere.

But while ecology and behavior may have shaped the major lineages of Amphiprion, it is primarily biogeography that has driven the immense diversification of this genus, and it is from this perspective that the current classification is most lacking. Speciation does not exist in a vacuum; it naturally follows the past geology of the Indo-Pacific—the raising and lowering of sea level during past climatic events… the shifting of the tectonic plates… the changing currents of these waters and the impact this has on larval dispersal. If the clownfishes of neighboring archipelagos have differing phenotypes, these should be regarded as distinct species. If the clownfishes of neighboring archipelagos have differing genetics, these should also be regarded as distinct species, even if there are no obvious visual differences that accompany it. This is a pattern of biodiversity that is in no way unique to this genus, but its importance has not always been recognized. This is why, for instance, Gerry Allen, in his seminal study, lumped so many distinct variants of A. clarkii into a single taxon.

In this review, we’ll be examining clownfish biodiversity utilizing as many different lines of evidence as possible: genetic, morphological, biogeographical, behavioral.