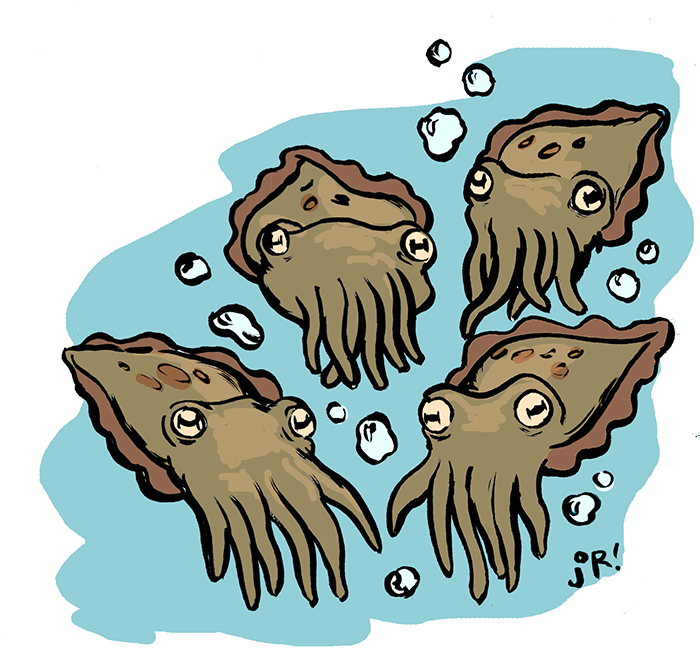 Angelfishes were the animals that first captured my attention in the marine aquarium hobby. Their beautiful colors and seemingly personable attitudes drew me away from the overall mundane colors and skittish behaviors of freshwater fishes I became accustomed to keeping over the years. When I first started working with corals they absolutely blew my mind. Every day I learned something new, and more fascinating than the last. Little did I know that another animal would just as quickly capture my affection ten years after coral. This is my experience with the amazing dwarf cuttlefish, Sepia bandensis. 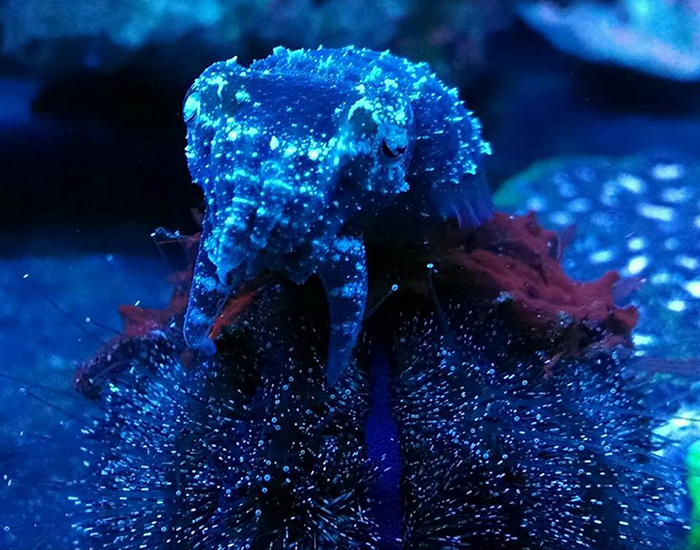 While perusing forums and blogs over the years I’ve seen pictures of cuttlefish-only aquariums, and most people at the time compared keeping cuttlefish with corals to keeping seahorses with corals. No stinging corals! Well to me those are the fun corals, so my dreams of keeping cuttlefish with corals vanished. Earlier this year I was in New York for the “Manhattan Reefs Frag Swap”. After dinner Saturday night we all went for a tour of Pratt Reef, and I had the pleasure of seeing Laura Birenbaum’s captive bred cuttlefish in person [i]. These little 2” hovercrafts were like puppies of the sea. I melted that night, and throughout the weekend grew intent on ordering some when I returned home. Which I did, eight of them in fact, for my 75 gallon office aquarium. 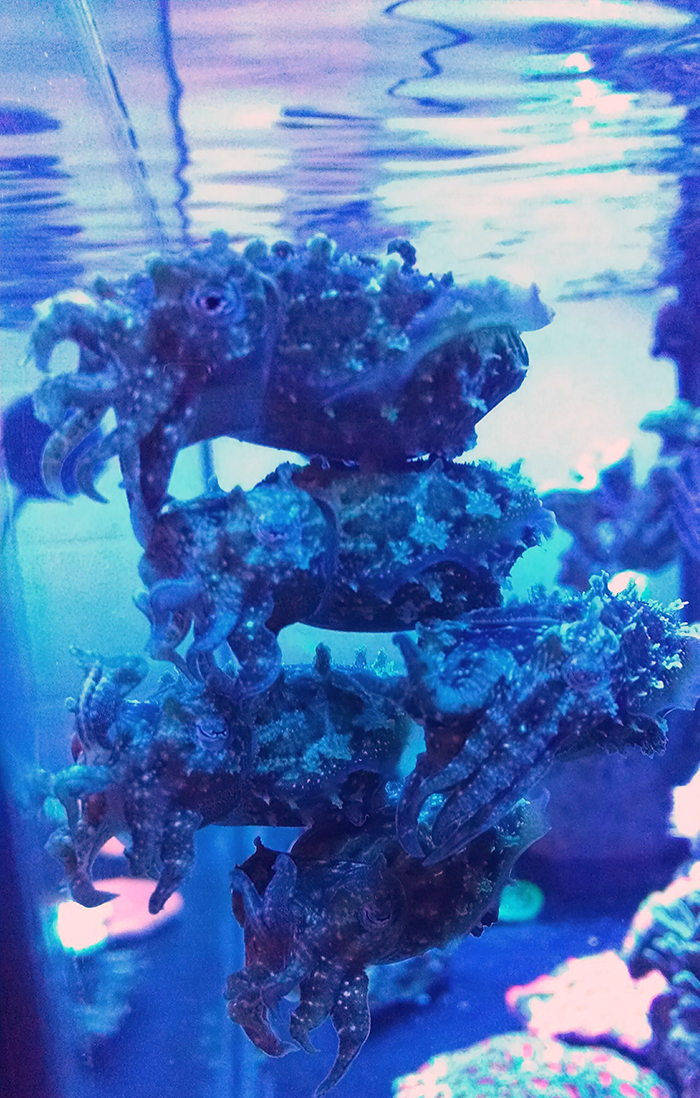 Of course I did my due diligence and researched the species heavily prior to calling Laura and yelling “Ship me cuttles!” I was familiar with their overall care as I already had some limited cephalopod keeping experience, but was still concerned keeping them with aggressive corals and needed to hone my knowledge of their nutritional requirements. There’s already some fantastic detailed information on keeping these animals out there by Richard Ross [ii] and other aquarists on Tonmo.com [iii], but I want to share some firsthand experiences that had me nervous to pull the trigger on these new animals.

-Keeping cuttlefish with aggressive corals does not seem to bother them. Prior to purchasing I spoke with Richard and Laura to make sure they agreed my current system was adequate. My office aquarium is a pretty basic reef system consisting of a big skimmer, high in tank flow and moderate reef lighting. There were several colonies of Favias, Euphyllia and large polyp non-photosynthetic coral that had me concerned. Within minutes of adding the cuttlefish I noted two of them perched in the middle of an eight inch Platygyra colony with sweeper tentacles engulfing them. They could not have cared less. On many occasions I watched them swim through the outreached tentacles of Dendrophyllia and brush their shoulders off as they continued unscathed.

-Inking is a defense mechanism most cephalopods share, which scared the hell out of me. We get so nervous about letting anything touch our precious reef water that the thought of letting an animal ink in the tank left me short of breath. Turns out the miniscule amount of ink released dissipates very fast and is quickly removed by skimming. Carbon is another great way to help rid of the ink, however I purposely didn’t add any carbon the first few times I witnessed inkcidents to see what happened. Nothing happened. Although my skimmate looked like black ink, imagine that! 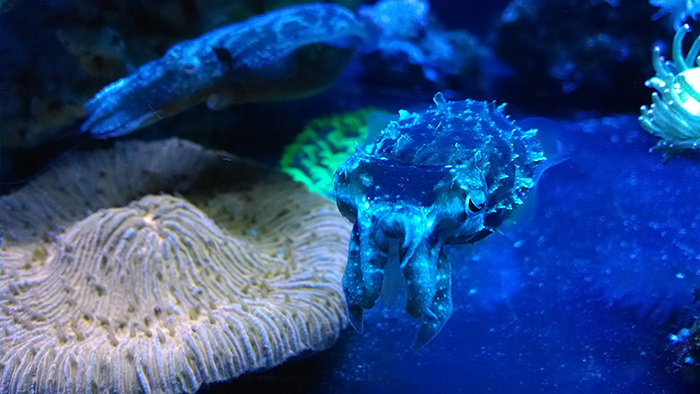 -Cuttlefish and powerheads don’t mix. I love to ramp powerheads up in a tank to the point where food skips across the substrate then ends up in the overflow within a couple cycles. This can get pretty hectic sometimes even for fish, so how would these little blimps cope with my flow? They took it in stride, riding the current just as they would in the ocean (that they’ve never been in). With that said I did turn my flow way, way down for a couple weeks to make sure I wasn’t coming home to a cuttlefish milkshake, minus the milk. You could say I flow acclimated. This reef uses a vortech MP40w ES turned up to about 80% power on “lagoon mode”. The first thing Mr. Ross told me was “Cover all intakes!” So I dug up that sponge thingy that I always throw over my shoulder when installing Vortechs and placed it over the pump. Voila! Intake covered. This worked very well and never sucked in a (live) cuttlefish. They would actually ride the current right in front of it and put on fantastic displays at dusk.

-Intense reef lighting was somewhat concerning to me, although I had seen Daniel Pon keep them in a high lit Acropora dominated aquarium back in 2008 [iv]. My office reef would probably be considered low lighting by most hobby standards, consisting of four T5s with one LED strip down the middle, although it would be quite bright for light sensitive animals. Overall the cuttlefish were always more active during low light periods, frequently hiding under ledges during high light periods. 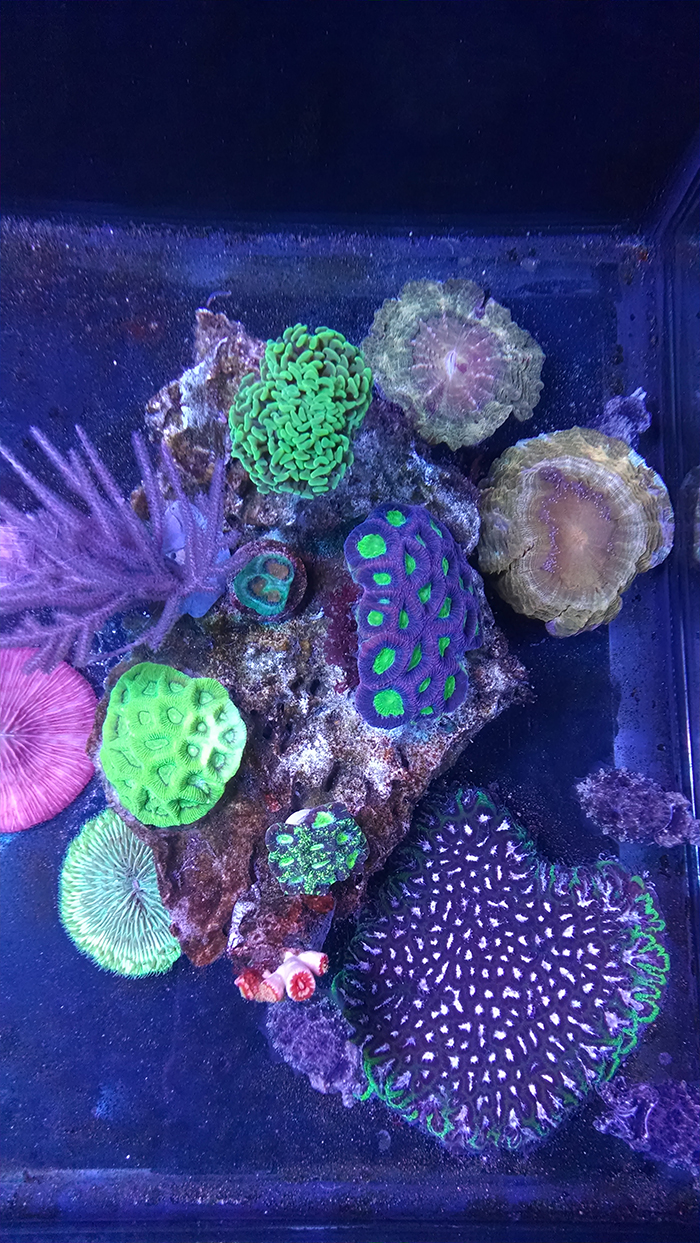 -Right off the bat I knew that I would want to keep a group of cuttlefish opposed to just a single or pair. Some literature will advise you that this is okay while others swear against it unless you’re certain you’ve obtained a pair. Both agree that you need to be prepared to intervene and separate when necessary. Laura keeps her juveniles in much larger groups than I had in mind, so for my tank size we decided upon eight. The social interactions were awesome to watch. Dominance displays the first few months were out of this world, leaving onlookers jaws floored shouting unfathomable words of excitement. At about five months of age the dominance displays turned into all out bare tentacle brawls. You could tell when they first started to get violent they really didn’t know what to do. A lot of pushing and shoving going on, but no one would drop their beer and proceed to swinging. Then one day one of the more dominant cuttlefish discovered the use of his beak as a weapon. Game on. I quickly removed the injured cuttlefish, and a couple days later removed two more for fear of what might come next. This settled things down in the display for another month and a half. Eventually I came home to a dead cuttlefish that had obviously been beaked to death. Its mouth was torn apart and feeding tentacles shredded. A few days later I came home to a cuttlefish with the same injuries, although still alive. Knowing it could never possibly eat again I euthanized it. Of the remaining cuttlefish I knew I had one pair, and a third wheel. The third wheel was removed and gifted to a friend before it lost its mouth. The pair remained happy for another couple months until the female started going into senescence. The large male must have recognized the tell-tale signs of clouding eyes and listless tentacles because he killed her the night before leaving to Denver MACNA. 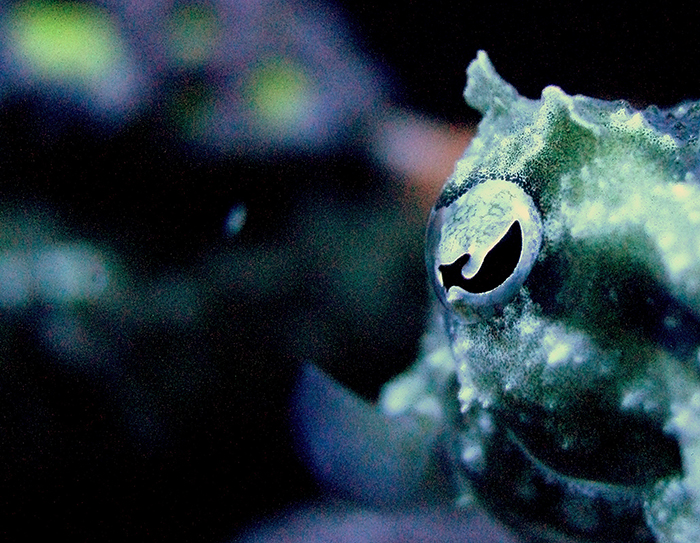 -Cuttlefish are ambush predators that prefer live foods. In fact watching them eat was the final nail in the coffin forcing me to give them a try. They can be trained onto prepared frozen foods, but this can take quite a bit of time and patience. I didn’t work with training them much over the first month but did have a few consistently eating frozen by the second month. However hand feeding frozen to eight cuttlefish can be very time-consuming compared to dumping in a couple dozen live feeder shrimp and walking away. When first received you should assume that cuttlefish must be fed live foods. Find out your most affordable option and run the numbers for feeding the cuttlefish for twelve months. This number can be very surprising and needs to be figured into your ability to keeping these animals thriving. My number was $2,800. Ouch. 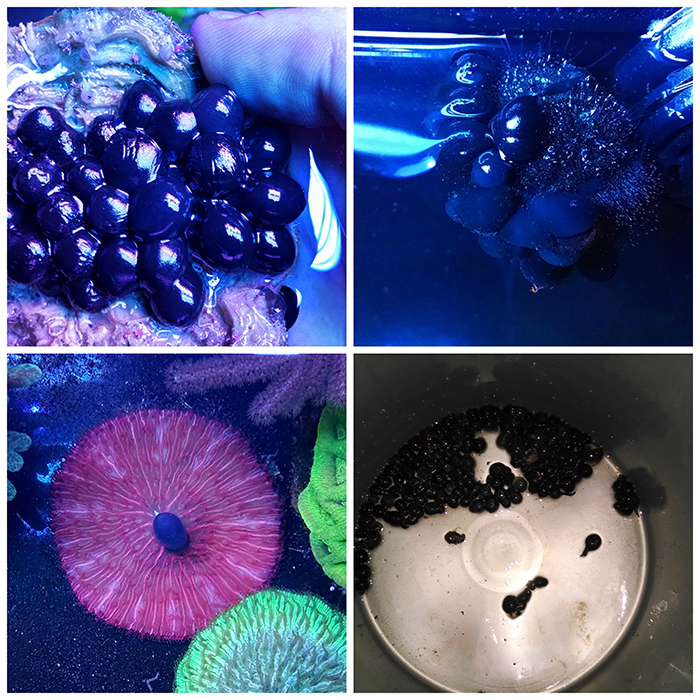 -Get ready for eggs! There’s no doubt in my mind that if you care for these animals and end up with a pair you will wind up with your fair share of eggs. I was ecstatic to find my first, lone egg. Initially I was intrigued to rear the babies, but quickly learned how time consuming and expensive it was [v]. Neither which I was ready to follow through with at the time. After the first egg came a nice full clutch on the bottom of a Goniastrea colony. Soon thereafter another pair decided it was time to lay eggs, and before I knew it I was pulling eggs out by the bucket full and plucking them from my urchin. I even caught corals that would try to eat eggs as they rolled over their polyps.

Overall this has been one of the most rewarding animals I’ve ever kept. They really do act like puppies, excited to see you come home, even more excited to have you feed them. Better yet you don’t have to clean up their poop off the office floor. If you can keep a reef tank thriving, then you can keep dwarf cuttlefish with ease. Remember to cover your intakes, and be prepared to separate brawls. If you’re even remotely interested in keeping this wonderful animal, and have the time and means to establish a tank of their own, do yourself a favor and go for it. You won’t be disappointed. Until then please enjoy this video of my cuttlefish over the past seven months [vi].