One of the most asked questions centers around the best temperature range to keep a reef tank at. Beginning with a series of articles and statements by Ron Shimek, Ph.D. advocating relatively high temperatures for reef tank maintenance this question has provoked considerable debate. Based essentially on anecdotal experience many experienced reef keepers like me and Greg Schiemer argue that optimum temperatures in the wild do not translate into optimum closed system reef tank temperatures. Both Greg and I have observed that temperatures above 82-degrees F too often are associated with outbreaks of what we call RTN (rapid tissue necrosis). I prefer to keep my reef tank temperature in the mid to high seventies despite the fact that Ron Shimek has suggested that reef building corals become dormant at these “low” temperatures. Keeping our corals at these “low” temperatures neither Greg nor I have had any kind problem with growth; in fact, both of us have to
frequently chop out hunks of living corals to keep them from turning our reef tanks into an impenetrable mass of aragonite. 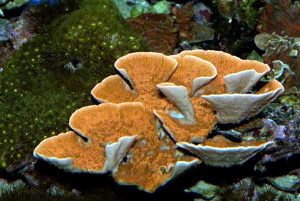 This orange Montipora sp. grew to this size in the author’s reef tank in a few months. It was given to the author by Greg Schiemer as a one inch fragment.

In this connection it is important to read this month’s Media column by J. Charles Delbeek. Just to give you a little taste of what you will find in greater detail in Delbeek’s column check out the following,

It is gratifying to find, as marine biologists study the diseases of corals, that what reef keepers have observed regarding the relationship of high temperature to RTN in reef tanks may be grounded in experimental fact, both in tanks and in the wild.

As an aside, I’d like to suggest that the concentration of PO4 (orthophosphate) in our reef tanks has a lot more to do with coral growth than does temperature. Calcification seems to almost stop when concentrations of PO4 approach 1-mg/L, and reach growth rates comparable to coral growth on wild reefs when the tank’s PO4 concentration drops below 0.1-mg/L. I have also found that PO4 levels can be dropped quite low by harvesting macro-algae on a regular basis from a refugium. Though the early advocates of the Berlin system often ridiculed the algae scrubber system developed by Walter Adey, many now recognize that the most successful reef systems employ the best techniques from many sources – modern reef keeping techniques utilize the best of Wilkens, Jaubert, and Adey.

With this issue, we are very pleased to publish the first of a series of columns by Julian Sprung. Through his books, columns, and lectures Julian has certainly become a star in our hobby, but for me it’s Julian’s love of sea creatures, his years of close observation of their habits, and his comprehensive husbandry skills that matter most. If you want to know what it is and how to keep it alive there is no one better to turn to than Julian Sprung.