As you can see from the accompanying photographs I’m both
having fun and making progress setting up my new reef tank. Even
though many people can afford to hire carpenters, electricians,
and plumbers to set up a reef tank, doing so will prevent one
from having the fun and sense of accomplishment from developing
and using many of these necessary skills. Perhaps it’s my way
of bonding with a new reef tank. I suppose only reef keepers
understand how one bonds with their reef tank. 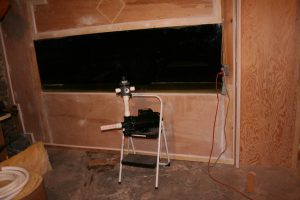 One of the wonderful things about our hobby is the sharing of
and search for new equipment and ways of doing things. In this
connection the arrival of volume 3 of
The Reef Aquarium, by Sprung and
Delbeek proved to be invaluable to even an old timer like myself.
For those of you who read last month’s editorial know that I
was trying to decide whether to go with a deep sand bed or just a
light covering on the bottom for appearance’s sake. Since
that time I got a copy of volume 3 and carefully read the
chapters on setting up a reef tank. It reinforced the belief that
I already had – a deep sand bed composed of oolitic sand is the
way to go. And, now I don’t have to worry about my green
wrasse being able to bury itself at night, and my Florida
cucumbers that I collected many years ago with Julian Sprung,
which have faithfully cleaned the substrate in the old tank.

Furthermore, even though I have been working with PVC for many
years I occasionally had problems with treaded fittings leaking,
especially those under pressure. After reading chapter three, I
realized that I was over-tightening the threaded connections and
thereby breaking the Teflon tape. This is one case where the old
quip; “if you can’t move it, use a bigger hammer”
doesn’t apply. 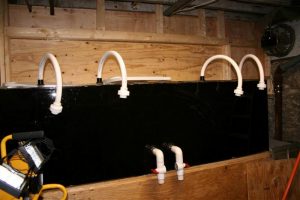 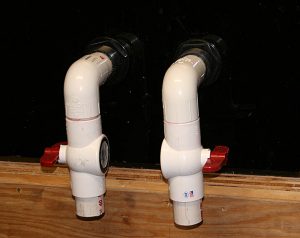 Even more exciting for an old timer like myself is the
discovery of some new technology. My discovery came from reading
our own forums. I found myself intrigued by the thread where Len
has been describing with words and pictures how he is going about
setting up his reef tank. See
this
thread for details. Ocean Motions has designed a state of the
art water circulation system that Len has plumbed this system
into his new setup. It is also described in volume 3 of TRA,
pages 421-422. So, as you can see from the photos here I have
decided to go with this system also. The photograph showing the
back of the tank shows how I use flexible PVC to avoid 90-degree
elbows. I’m using a Sequence Reeflo Hammer Head Pump. Using
only 300-watts, it can push out over 5000-GPH. However, its
output can easily be lowered when pumping into resistance,
therefore the flexible PVC. I have used Jacuzzi high pressure
pumps in the past, which are designed to handle back pressure,
but the price you pay is in electrical consumption, around
1000-watts, and heat. When I switched over from a 12-amp Jacuzzi
pump several years ago to the Hammer Head my electric bill
dropped over $50.00/month and the tank’s water temperature
dropped 2-degrees. 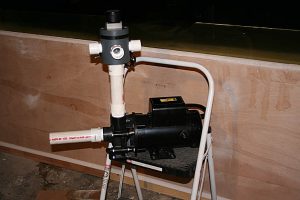 Before I connect the Hammer Head to the sump, a Rubbermaid
fiberglass 300-gallon stock tank and the Ocean Current’s
rotating drum I will plumb in two Haywood true union connectors.
By doing this I can easily isolate the pump if it ever requires
servicing or replacement. An established reef tank can survive
many days without light, but not without circulation. My years of
experience have taught me to respect Murphy’s Law
‘whatever can go wrong, will.’

Finally, the 4 outlets returning water to the tank from the
sump terminate in Ocean Current’s rotating heads called
“revolutions.” Only one is pictured here. When water is
directed to them they lower into the water and rotate 360-degrees
at 45-degree intervals, and retract when the water pressure is
relaxed, and in that way mate perfectly with Ocean Current’s
motorized valve pictured temporarily connected to the pump. I
have my valve setup to have two on and two off, but there are
various combinations available.

One of the wonderful aspects of our hobby is doing and
learning new things and sharing that information with other reef
keepers, which is why
Reefs.org and
Advanced Aquarist
exist.