This first issue of the New Year brings a new, and beautiful featured aquarium, and three feature articles. The article by Kenneth Wingerter, entitled Collection and Aquarium Husbandry of Northeast Pacific Non-Photosynthetic Cnidaria, deals with invertebrates that are nonphotosynthetic, and therefore require feeding. This is especially important because many advanced reef keepers are interested in keeping in captivity animals that do not have zooxanthellae (photosynthetic dinoflagelates) from whom hermatypic corals receive close to 90 % of their nutrition. Most of the temperate animals that the article discusses are nonphotosynthetic.

It is most certainly clear to most reef keepers that water circulation is one of the key elements to success, along with lighting, calcium supplementation, and light intensity. In fact, as coral growth in many reef tanks makes adequate circulation increasing difficult circulation has to be checked and increased. I suspect that this is one of the elements that contribute to what has been called the “old tank syndrome,” where the tank is not as hospitable to a variety of animals as it was when newly setup. Dana Riddle’s article, entitled Measuring Water Movement in Your Reef Aquarium for Less Than $100, provides the aquarist with tools to measure and check on water circulation.

Our third feature article by James Fatherree is entitled A Look at Gobies. Most of the gobies seen in our hobby are both beautiful and fascinating. The so-called shrimp gobies are especially interesting. Not long ago I spent some time in Thailand, with some of that time diving off of the island Pea Pea, located in the Andaman Sea. It is without a doubt one of the most beautiful places I have ever dived with an enormous variety of the animals that reef keeper’s prize. However, when I went to an Island off of the coastal city Krabi I was initially disappointed to find only sand, without coral or fish, or so it seemed. Nevertheless, I put on my mask in about two to three feet of water and discovered that at about every ten feet was a burrow dug by a shrimp with a goby hovering at it entrance. Although these gobies can live without their shrimp it is much more interesting to witness them together.

Unfortunately, I didn’t have an underwater camera to photograph them, but here is a picture of the area above sea level. 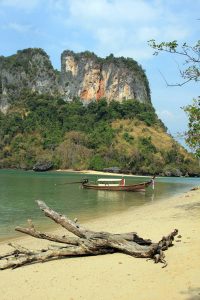