From the time – late 1960s – that I started to keep tropical sea life in aquariums to the present, the state of our hobby has changed considerably. However, the quest has essentially remained the same: what is it and how does one keep it alive in captivity. Over the last 40-years we have gotten much better at keeping “it,” and we have become far more conscious about the collection practices our hobby has had and is having on wild reefs throughout the world. More and more reef fish offered for sale are bred in captivity; and corals, once thought impossible to keep in captivity are now routinely fragmented and traded between reef keepers. There may even come a day when tank raised corals will be used to repopulate decimated natural reefs.

Until about 15-years ago changes to our hobby were dramatic. For example, the understanding, in the seventies, of the role played by biologic filtration was dramatic; without the establishment of nitrifying bacteria it was simply impossible to prevent fish from poisoning themselves with their our metabolic wastes. With this understanding came the development of more and more technically sophisticated biological filtration equipment – the trickle filter for example. However, now that we could keep reef fish from polluting themselves to death, we found ourselves confronted with a variety of life threatening pathogens. Creating a viable environment for the fish also created an environment that was suitable for pathogens, many of which could only be eliminated with the use of chemicals that where also toxic to the fish, if only at slightly lower doses. The problem of the time was how to kill the pathogen without killing the fish. 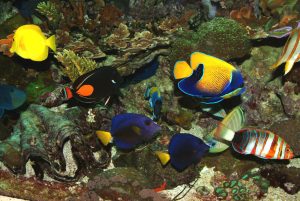 This photograph of a section of my reef tank shows many of my guests assembling for a feeding. Most of these fish I have had for more than 10-years and one close to 20. It is only in a well balanced reef tank that this is possible.

For me, the next major change to our hobby occurred in the eighties – the coral reef aquarium. Although it was wonderful to keep an enormous variety of invertebrates successfully, even reef building corals, what really was important was a change in how aquarists thought about successful captive reef environments. The concept of a “natural” man made environment became dominant. That is, how to most closely create an environment that as closely as possible simulated the world that the tropical sea creatures we kept in captivity evolved in. The first thing many of us noticed was that coral reef fish were much healthier in “natural” coral reef tanks, and that diseases outbreaks occurred far less often.

In the nineties, toward the goal of creating a “natural” environment, we began to understand the meaning of producing a balanced aquarium – how to maintain a balance between the producers of waste and the consumers of waste, whether using biological, chemical, mechanical, or a combination of all three. We found that it is possible to keep the water in a captive reef tank pristine, without having to change 50-% of it every week. It takes two essential things: understanding the concept and know-how. The sharing of information through books, periodicals, conferences, and the internet has made many more successful aquarists; and has meant fewer unnecessary deaths to the animals we all admire and love.

Currently, in my opinion we are in the age of refinement. Feature articles and columns in his online magazine focuse on tweaking established techniques – how to get the most and best light for your dollar, what’s the best salt mixture to use, how to fed the hard to feed, the best plumbing techniques, and whether to use trace elements are issues of refinement. I think ourselves very fortunate that we have reached this stage in the development of our hobby