The very first issue of Aquarium Frontiers (Fall, 1993) began with a feature article by Julian Sprung entitled A Review Of Algal Filtration: History & Future. That was over 10-years ago – 1991 to be exact. It was a time when most reef aquarists opposed Dr. Adey’s ATStm (algal turf scrubber) filtration system. Much of Adey’s material on this topic is elucidated in his book Dynamic Aquaria – Building Living Ecosystems. The advocates of the so-called Berlin system (bare bottomed tanks, protein skimming, and activated carbon) were, to say the least, scornful of the ATStm system. That was then. 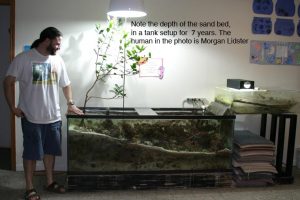 During the last 10-years the Berlin system underwent a gradual evolution, an evolution that brought it more in line with the ATStm system than many realized. The introduction of sand beds – many quite deep –, along with refugiums and miracle mud sought to accomplish what ATStm systems were particularly well suited for. That is, a way to consume excess nutrients produced by the larger and larger fish biomass that reef keepers where housing in their reef tanks. It is now realized that in a real sense protein skimmers are algal scrubbers – they export significant quantities of phytoplankton. The bottom line is still the same, to balance the production of waste by the producers (primarily fish) and the consumption of said waste by consumers. It is here that the ATStm system really shines. This is a truth that was brought home to me, as I pointed out in last month’s editorial, by my visit to Morgan Lidster’s Inland Aquatics — http://www.inlandaquatics.com/.

Here are some notes by Morgan from a talk he gave in the past:

“I would like to point out that I represent Aquatic Technologies, Inc., better known as Inland Aquatics. ‘Though these companies have yet to prove profitable, they are For Profit enterprises. Make no mistake about it…. I am biased! Truth be told, it is arguably more accurate to describe Inland Aquatics as a representative of me. Inland is a public window into the last five years of my life. Presenting myself as anything but intimately connected to it would be dishonest. Nevertheless, as you learn more about Inland Aquatics, I am confident you will agree that I’m actually “pitching” a sustainable future for OUR hobby.

It’s important to note that, except when I state otherwise, I am speaking of true Algal Turf Scrubbers (ATSa), as developed by Dr. Walter Adey of the Smithsonian’s Marine Systems Laboratory. True ATS scrubbersa are specifically designed to maximize the sustainable growth of algal turfs, the most efficient algal community known, while minimizing maintenance. ATS scrubbersashould not be confused with other types of algal filters, many of which are confusingly marketed as “Algae Scrubbers.” The patented dump bucket makes it possible to maintain the turfs…..the turfs do the “scrubbing”.

Undoubtedly, many of you are familiar with the controversy that arose in FAMA magazine in 1994, just after the release of Dr. Adey’s book, Dynamic Aquaria While I don’t want to rehash that here, it should be obvious by the end of the evening that many of the endlessly repeated criticisms of ATSasystems have proven to be unfounded. (By the way Dynamic Aquaria volume 2 was released at MACNA X last week. It features many of the systems from our facility. Check it out.)

Inland Aquatics has designed, built and operated ATScrubbers on commercial mariculture systems, retail showroom systems, and residential (40 to 400 gallon aquaria) systems for approximately five years. Based on our experience with commercial mariculture systems, we designed ATStm scrubbers for hobby scale usage. Though they have yet to be mass marketed, we have been selling residential size systems to aquarium hobbyists since mid 1997.

Total gallons of ATScrubber-driven systems maintained, by Inland Aquatics, under this paradigm is approximately 45,000 gallons. Some of our original systems have been combined into larger systems, but our showroom houses systems over 4 years old. ATStm scrubbers are the only filters on all our systems, unless you count the sediment trapping refugia. While we recommend at a 5% -10% annual water changes, the water in these display systems has yet to be changed. Nevertheless, we are pleased to compare it to any conventional, high maintenance system, regarding appearance, biodiversity, and overall success!

The following is a brief summary of the benefits I have witnessed with ATS filtration:

The benefits of true Algal Turf Scrubbing include the effective regulation of oxygen, pH, and nutrient cycling, as well as surge simulation. Other benefits include the following:

Talk’s cheap! I’m sure you’re wondering, “why”, if ATS scrubbers are so great, “have I read so many negative opinions about Algal Turf Scrubbing”…. I’m going to touch on the three main reasons, as I’m sure I’ll get asked about this later.

1) All “scrubbers” are not created equally! Although there are benefits to any photosynthetic filtration process, only true ATStm scrubbers are designed to utilize the incredible power of algal turfs. Turfs are 10 to 100 times as effective as macroalgaes. Only filters with true algal turfs are truly scrubbers.

2) These systems are different! Many have failed simply due to miscommunication of the Dynamic Aquaria paradigm. ATS microcosms work incredibly well, but only if one allows them to! The success of Dr. Adey’s personal systems, hundreds of ATStm scrubber owners, and Inland’s 40,000 + gallons of thriving captive reef illustrate the incredible potential of this difference. Accounts of frustrated professional aquarists, on the other hand, illustrate the gravity of that difference.

3) Misinformation!!! Ninety percent of the articles/books published, and online services about “scrubbers” have been written by authors with little or no experience with these systems. One of the most striking illustrations of this is a FAMA article describing algae scrubbers as “mechanical filters that remove algae from the water or magnets used to scrape the glass”. Another favorite, entitled “The Difference Between Algae Filters and Algae Scrubbers” concluded with the author mentioning that he had no idea what an algae filter is….. Even venerable authors appear content to echo hackneyed critiques, without investigation

Don’t take our word for it….come and see for yourself!”

These are some photos I recently took at Inland Aquatics. Note the photo of an a Atlantic Blue surgeonfish. This surgeonfish is especially difficult to keep in captivity – I was especially impressed by the health of this specimen in one of Inland Aquatic’s ATStm tanks. 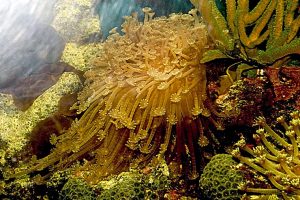 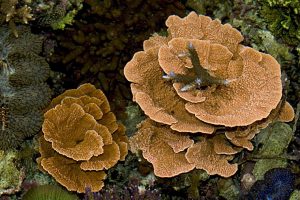 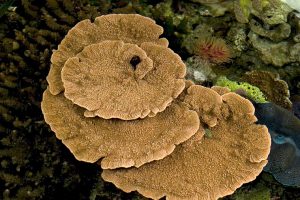 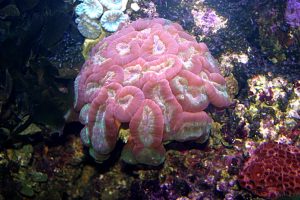 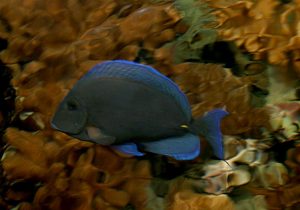