For several months now I have been talking about setting up a
new reef tank in Portland Maine, with the goal of moving all of
my animals to their new home. I had done this before, when in
1999 I moved the inhabitants of 3 reef tanks from Brooklyn NY to
Provincetown MA, into a newly setup 10-foot tank. That move went
extremely well – I didn’t lose an animal. This time
however, things ended tragically. Although, all the invertebrates
– corals, crabs, cukes, snails, etc. – survived the
move and are flourishing in the new reef tank, I lost all of my
fish. This was so traumatic for me that this is the first time
I’m writing about it. As some of you know, many of the fish
that I lost where with me for 20-years, and my Amphiprion
frenatus for 24-years. All of them were killed by a parasite,
which I have good reason to believe was either Brooklynella
hostilis or Amyloodinium ocellatum. More about this
latter. Right now I want to memorialize my finned guests with a
series of photographs taken of them over the years. This is also
the first time that I have been able to look at these pictures
myself. 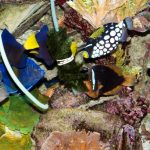 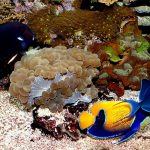 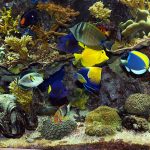 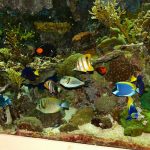 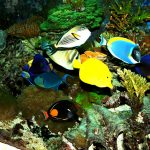 I moved all of the inverts and fish at the same time because
my collection of surgeonfish was very territorial and if I just
moved a few and added the others latter it would have resulted in
warfare; at least, so my reasoning went. Initially, the move went
well. Within a few hours of the move, all of the fish were
feeding and searching for hiding places. In fact, everything was
fine for three days, when I went back to the Cape to pick up some
equipment. Within several hours I received a phone call from my
son telling me that something was wrong with the fish. I jumped
in my car and drove back to Portland, only to find most of the
fish dead or dying. Their bodies where heavily slimmed up, and an
examination of the gills of the already dead showed massive
hemorrhaging. This explosion of parasites literally took place in
24-hours, and within 4-days every fish was dead.

How this did happen and where did the parasite come from? I
strongly suspect that the parasite was in the system, but held in
check by the established fish’s immune systems, and also
that the old sand bed and heavy concentration of corals ate most
of the new parasites (tomontes) before they could find a host.
Both of these parasites, under conditions that favor them, will
reproduce at deadly speed. The new tank had a new sand bed, and
the fish were clearly stressed by the move. The notion that we
can keep parasites completely out of a reef tank with an
extensive collection of fish is probably fool hardy; what we can
hope for is an environment that favors the fish. Clearly, having
moved my animals once with success was no guarantee that I would
be successful again.

For someone who has been keeping marine fish in captivity for
close to 40-years it was an experience both painful and very
humbling.