Lately, brilliantly colored corals are being offered for sale in the United States, and probably elsewhere, that owe their garish coloration to the use of dyes. I have been told that the practice originated in Jakarta. In my opinion, this is a thoroughly despicable practice. Not only does it offend my aesthetic sense, but the practice usually spells the death of the coral, and may even damage healthy corals.

Most of the corals that reef keepers keep in captivity are hermatypic, whose symbiotic dinoflagellates (zooxanthellae) produce much of the nutrition required by these corals, utilizing light to produce carbohydrates from carbon dioxide, water, and inorganic salts. This is a process called photosynthesis. Corals immersed in food dyes may look “pretty” to some eyes, but it is quite likely that that the dye prevents or limits the available light from reaching the coral’s zooxanthellae. In time, this will bring about the death of the coral. The deceiving issue here is time. Bruce Carlson once told me that many of the corals that reef keepers put into their tanks “are already dead, but don’t know it.” An unsuspecting aquarist may bring home a dyed coral, which will die in four to six weeks, but within that time period may look like it’s going to make it. Furthermore, Craig Bingman (personal communication) pointed out that the dyes used may, in and of themselves, be toxic to the dyed
coral. 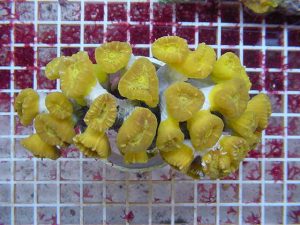 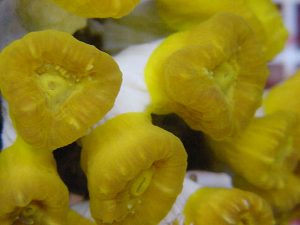 An example of a dyed Caulastrea. Photo courtesy of Mary Middlebrook, MSI 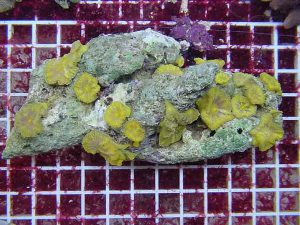 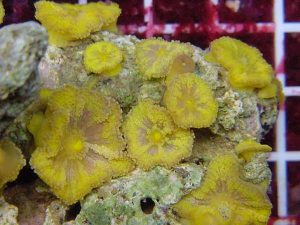 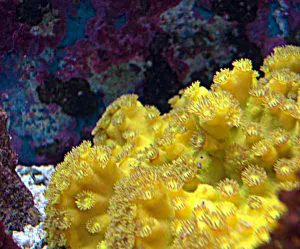 Although I cannot offer the reader little more than anecdotal observations by myself and others, artificially coloring corals can be more of a problem than the death of the dyed coral. Apart from aesthetic and moral considerations, a potential problem with dyed corals is that their introduction into an established reef tank may bring about the death of other, but healthy, corals. Those of us who have kept marine fish know that a new fish, placed in a disease free established tank, often provokes an outbreak of disease. The new, stressed fish may bring in new pathogens or activate dormant pathogens, which may overwhelm even the healthy fish. This process is usually quite visible, but with corals, disease pathogens are not readily visible to the naked eye. For example, an aquarist may introduce a dyed coral into an established reef tank, and a number of weeks later have an outbreak of RTN, and never connect the dots – not realizing that the dyed coral’s stressed condition brought
about the outbreak.

If it is gaudy colors that the aquarist wants in his or her corals I suggest a “virtual” reef tank, leaving the real thing to those of us that are satisfied with the beauty of the natural world.