This is the third and last part of my discussion and description of
my reef tank. It focuses on filtration. As most of you already know,
there are three types of filtration: particle, chemical, biological.
Because we have such an enormous concentration of living organisms in a
very small body of water when compared to the ocean efficient
filtration is virtually a necessity.

One caveat, it is possible to have a reef tank with very little
filtration if one is content to have no or very few fish, and those
require very little feeding. In fact, when reef tanks where just making
their appearance in the early eighties it was gospel that to have a
reef tank one could have very few fish. Today, however, most of want a
significant population of fish, but have to utilize efficient
filtration techniques to make it work. 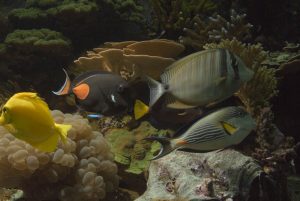 The bottom line is the same; one must achieve a balance between the
producers of waste and the consumers of waste. If the producers, fish
for example, produce more waste than the consumers can eliminate the
reef tank will soon resemble a eutrophic lagoon choked with undesirable
algae, especially slime algae. At this point I should note that it is
always necessary to have an active clean up crew of snails, crabs,
cucumbers, etc. because it is not possible, even with the best
husbandry, to keep all algae out of one’s reef tank.

It is relatively easy to maintain a pristine reef tank environment
with a minimum amount of producers like fish. However, myself like most
contemporary reef keepers want fish in their man made reef, and because
reef fish are usually very healthy in a reef tank when compared with a
fish only tank they survive and grow. As they grow they require more
food, and consequently produce more waste. This puts more demand on the
consumers, and if the demand is not met the general health of the reef
will slowly decline. My clown triggerfish pictured here has tripled in
length and I’m sure weighs 4 to five times as much as when added to my
reef, and this in less than 2 years. 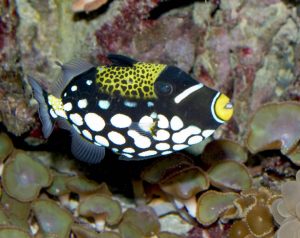 Though it is true that photosynthetic corals (soft or hard) will
consume some waste as their zooxanthellae photosynthesize in the
presence of light, the amount of waste consumed by them is very small.
As a result, most reef keepers utilize a variety of filtration devices
to consume waste, and also replace significant amounts of water at
fixed intervals with nutrient free artificial sea water.

I have a lot of fish, some of whom over the last 20 years or so have
grown quite large. They produce a lot of waste, and this is what I do
to eliminate as much of it as I can. I can assure you that it’s an
uphill battle. Aside from a canister filter most of my 10-foot tank’s
filtration takes place in a 300-gallon Rubbermaid vat. The vat is
convenient because it has great surface area at only 18-inches in
depth. This allows me to sit a 50-gallon refugium in it on plastic milk
crates. Also on milk crates is a 60-inch ETS down draft skimmer that is
driven by an Iwaki 70-RLT.

The canister filter is changed every two weeks. It is filled with
ESV activated carbon and Two Little Fishies’ PhosBan. These two
products are used essentially for chemical filtration: the carbon keeps
the water clear absorbing discoloring organics, while the PhosBan
reduces orthophosphate to levels that are hard to measure.

This powerful skimmer removes a lot of particulate matter, but more
importantly functions as a micro-alga filter. Its skim mate is composed
largely of phytoplankton. These small algae photosynthesize thereby
removing nutrients (waste) as they are harvested from the system via
the skimmer.

From the refugium I harvest, about every two weeks, a 5-gallon bucket full of Caulerpa sp.

By exporting the macro-alga whatever nutrients it absorbed to grow is removed from the system.

Despite all of this, nutrients, especially nitrates accumulate in
the system necessitating a 30% water change every couple of months,
with newly prepared artificial seawater. The freshwater is first
prepared from RO/DI filtration.