The pictures that accompany this editorial where taken two
days ago, and I thought that some of you might be interested in
an update about two controversial fish that I added to my reef
tank: a clown trigger (Balistoides Conspicillum)
and a saddled butterflyfish (Chaetodon Ulietensis. The
other fish in the tank pictured here is the Acanthurus
sohal, the boss of the tank. The clown trigger was added
about two years ago when it was a juvenile, and the
butterflyfish about 4 months ago, which was added to stop the
dreaded Manjano sp anemone from taking over the
tank. 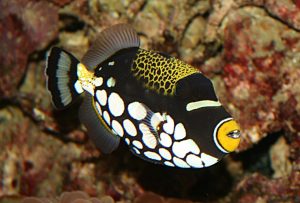 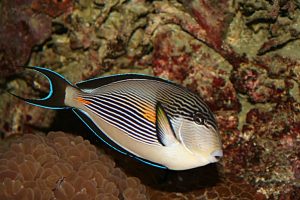 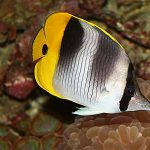 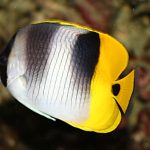 Much to my surprise, the trigger has not bothered anything,
vertebrates and invertebrates alike. It is important to note
that it’s in a 10-foot tank, and was about 2-inches in length
when it was first put in the tank. (I would be very hesitant to
introduce a mature clown trigger into an established reef
tank.) It occasionally has a threatening standard off with my
tuskfish and green wrasse, but this has never progressed beyond
threats, which where usually initiated by the other two fish in
question.

The saddled butterfly completely eliminated the
Manjano sp. Anemones. The longer I’m in this hobby the
more convinced I am that the natural approach is best when
dealing with a problem, in this case the invasive
Manjano sp. anemone. Again, and even more to my
surprise, it has not bothered very much any of the sessile
invertebrates in my reef tank. I sure you have noticed that I
said “very much.” There is one Acropora sp. that was
given to me by Greg Schiemer that has unusually long polyps,
which, ever since the introduction of the butterflyfish, it
never extends during the time when the lights are on. There are
many other stony corals, LPS and SPS, which it has not
bothered. What is also interesting is that it eats flake food
with gusto – maybe it thinks it’s a surgeonfish. In any case,
it may be true that I have an atypical butterflyfish.
Therefore, do not construe this update as a recommendation for
either of these fish; one can never tell what an individual
fish will take a fancy to, and when.