To expand on what I said last issue, where I said, Though the early advocates of the Berlin system often ridiculed the algae scrubber system developed by Walter Adey, many now recognize today that the most successful reef systems employ the best techniques from many sources – modern reef keeping techniques utilize the best of Wilkens, Jaubert, and Adey. When I first established my first successful reef tank, almost 20 years ago, it utilized methods developed by Peter Wilkens and other German aquarists. It was essentially a bare bottomed glass tank, filtered by live rock and protein skimming, replacing evaporated water with kalkwasser, and illuminated by intense lighting devices available at that time. 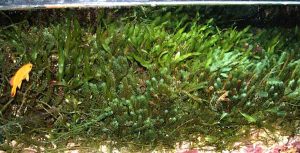 A photograph of the author’s macroalgae refugium.

At about the same time, Walter Adey’s technique for growing abundant macroalgae in a connected tank (refugium) and harvesting the algae worked to consume waste material generated by producers like fish. It was clear that fish flourished in systems that utilized algae scrubbers, but corals didn’t appear to do as well. The macroalgae tended to yellow the water and to change the water chemistry to its own advantage, and was therefore rejected by many reef keepers.

Also, at around the same time, at the Monaco Aquarium, Jaubert was having considerable success with a deep sand bed resting on a porous platform elevated slightly above the tank’s bottom, thereby providing a sink for waste material. However, Jaubert’s system was not really a closed system, and could sustain only a limited number of stony coral. 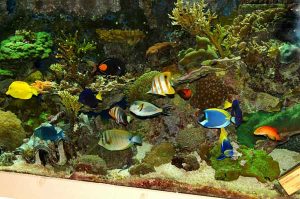 A recent photograph of the growing fish in the author’s reef tank.

Around six years ago, though I still advocated the so-called Berlin system, I added live sand to my reef tanks. I became convinced that a live sand bed would not pollute the tank with hydrogen sulfide, looked more natural, would house zooplanktonic life, and create a low O2 zone that would lower nitrate levels by growing anaerobic bacteria to reduce nitrates into nitrogen gas. Like many reef keepers at that time I found that the sand bed could sit right on top of the tank’s bottom, and that the elevated plenum platform was not necessary. For more about the Jaubert technique, read Julian Sprung’s Feature this month.

This short history brings me to the present time in my pursuit of the holy grail of reef keeping: a closed system environment within which most forms of reef life would flourish. Many advanced reef aquarists began to notice that properly set up reef tanks reached their peak of hospitality to a large variety of reef creatures after about a year, and after that period of time conditions began to gradually deteriorate, but why? Despite protein skimming, carbon filtration, and water changes, which did slow the deterioration, after a period of time biochemical conditions simply got worse.

There appears to be a couple of things that bring about this change in reef tanks. The fish and corals grow larger, and in the case of growing corals, water circulation in and around many captive corals declines. In the case of growing fish, they eat more and produce more waste. Gradually, nitrates and phosphates, and possibly various trace elements, increase in concentration thereby becoming toxic to different reef creatures.

It is for these reasons that more and more reef keepers have taken to growing considerable quantities of macro algae in a refugium, which is then harvested regularly. Trace elements, and especially nitrates and phosphates, are exported in the harvested algae. In his column this month, Randy Holmes- Farley, Ph.D. points out that orthophosphate (PO4) levels, when they increase to a certain concentration inhibit calcification by corals, and that one of the best ways to reduce those levels is to export PO4 by growing and harvesting macroalgae.  To make this more meaningful to nonscientists Randy offers some data that specifically explains exactly how much harvested macroalgae is required to lower the PO4 level in a given body of water. Information like this is invaluable.

I have begun to grow various species of macroalgae in a 40 gallon refugium connected directly to my sump. I illuminate it with a 250 watt Iwasaki MH bulb. Every week I’m able to pull out a pail of macroalgae. When the alga begins to look a little pale I add some chelated iron, because a lack of iron appears to limit algae growth. This process has rewarded me with lower PO4 and NO3 levels, and more importantly, stony coral growth in my reef tank has increased. I also use, and change regularly, activated carbon, which prevents the macroalgae from discoloring the water. As I suggested in the beginning of this column, many of the most successful reef tanks today combine various methods from different sources.

With this issue we welcome a new columnist, Jon Bondy, who takes us into the realm of aquarium photography. Many aquarists today enjoy photographing their aquatic friends, and Jon’s series will show us how to do a better job at it.