Recently, a visitor to our discussion boards started the following thread, “I was wondering if doing water changes is even necessary. I don’t have a calc reactor but I’m planning on adding b-ionic for calcium supplementation. Should I change my water and how often? This fell under the topic of Water Changes. For the whole thread see http://www.reefs.org/phpBB2/viewtopic.php?t=38015. 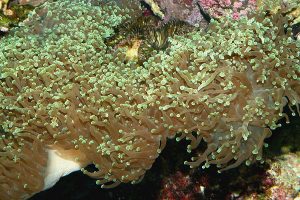 This exchange reminded me what our web site is really all about – questions, answers, choices, and ultimately sharing information about how to best treat our aquatic guests. However, what is the quality of advice offered, especially when one’s confronted with many different opinions. Whether accessing our online magazine or participating in one of our discussion groups readers often ask questions, only to be confronted with a variety of seemingly mutually opposing answers. One of the reasons for this is that though some questions appear to be asking for a simple yes or no, the answer to many seemingly straight forward questions is more complex than it appears, and implies choices. One such question is, “should I change water, and if so, how much and how often?

It is possible to answer this question using the scientific method. One would have to set up a statistically large enough number sampling of tanks where everything (light, salt, circulation, temperature, specimens, etc.) about them is exactly the same, then change water in half of the tanks and not in the other half. The health of the genetically identical animals after a significant period of time would then be compared. Perhaps then one could answer whether water changes are beneficial. All this assumes that the water changes used pristine water; using poor quality replacement water might very well worsen the situation. Clearly, this would represent a considerable investment in time and equipment. This is one of the reasons that we offer a media column, where our columnists Delbeek and Robbins, keep us informed about current scientific research. In fact, in this issue Delbeek summarizes some surprising information about growth patterns of wild corals in water with a relatively high nutrient content, caused by environmental run-off. 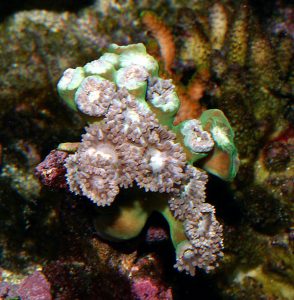 This specimen of Duncanopsammia axifuga was given to my Julian Sprung.

With that said, experienced reef aquarists can offer some valuable anecdotal insight into the water changing questions described above. The question about whether to change water, especially in large reef tanks where it requires a lot of new water to make it meaningful, is both hard work and expensive. Changing less than 20-% every few months is not meaningful in my opinion, and if you have more than a 500-gallon system we are talking about a lot of new water. Greg Schiemer and I have been experimenting with this issue over the last year. In fact, I hadn’t changed water in my 700-gallon system for over a year, and the same was true for Greg. Recently, we both went back to changing water and compared notes. Both of us saw clear indications that the overall health of our sessile invertebrates improved. For example, after the water change polyp extension obviously increased.

I also noticed that my Duncanopsammia axifuga had for at least a month stopped opening its polyps. After the water change, as you can see form the photo, it is now open and feeding again.

How long can one go without changing water to the point where most animals began to die I cannot answer. Different species would probably die off at different rates, because some species are more tolerant of adverse conditions than others. Some conditions are favorable to some species and not others. However, my experience tells me that if you want to keep the greatest variety of animals keep the quality of your reef water as optimal as possible, and to that end water changes help. Finally, be sure to use a good salt mix, and prepare it with RO/DI water, or its equivalent.