New LED fixtures continue to be introduced into the hobby. Specifically, there has been an increase in the number of LED fixtures providing a more fuller color spectrum with multiple channels of control, allowing the user more freedom in custom tuning the light output. Continuing in the same vein as my previous LED lighting tests, this article presents data on light intensity and spread along with spectral plots for several new LED fixtures. Table 1 presents a list of the LED lighting fixtures reviewed in this article. Each of these was tested using the same set up as my previous reflector tests, using a 3’X3′ grid with a spacing of 3″ in the X,Y direction. The fixtures were centered on this grid, and PAR was measured as PPFD (Photosynthetic Photon Flux Density) in micromoles/m2/sec using a LICOR 1000 data logger and a LI-192SA underwater cosine corrected sensor calibrated for both air and water. The data logger was set to average 5 readings for each data collection point. The data was imported into Microsoft Excel for analysis and the data was plotted to display the light spread and intensity at various distances. 4 plots of the data with 2 plots at each distance were generated showing:

The spectral distributions were measured using the Licor LI-1800 spectroradiometer. The spectral data was collected from the various LEDs and normalized such that integrated light output (spectral irradiance) between the wavelengths of 400-700 nm was 100 Watts/m2. Data was collected at full power output for the individual channels of light control (eg. Blue, white) along with data with ALL LEDs on at full power. The data was normalized so that the total irradiance was at 100 Watts/m2 over the wavelength range 400-700 nm. The various LED color outputs were then scaled by the same scale factor to allow of determination of the contribution of the various LEDs to the full output. The results are plotted as a Spectral power distribution plot.

The Maxspect Razor (R420R M16000) is built with a very slim profile, and is one of the thinnest LED fixtures in the market. The unit tested is the M16000, based on its advertised rating of 16000K color temperature. The unit has 2 channels of control with the following LEDs arranged in the 2 channels, as shown by their specifications in Figure 1 below. 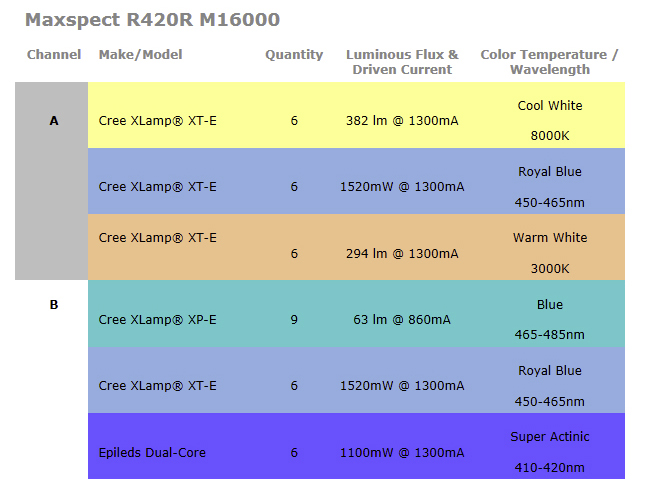 These leds are arranged in 3 sets (or clusters) with the pattern in each set as shown in Figure 2. 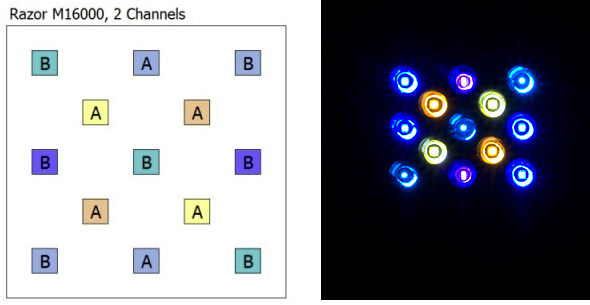 Figure 2. Arrangement of LEDs in each cluster 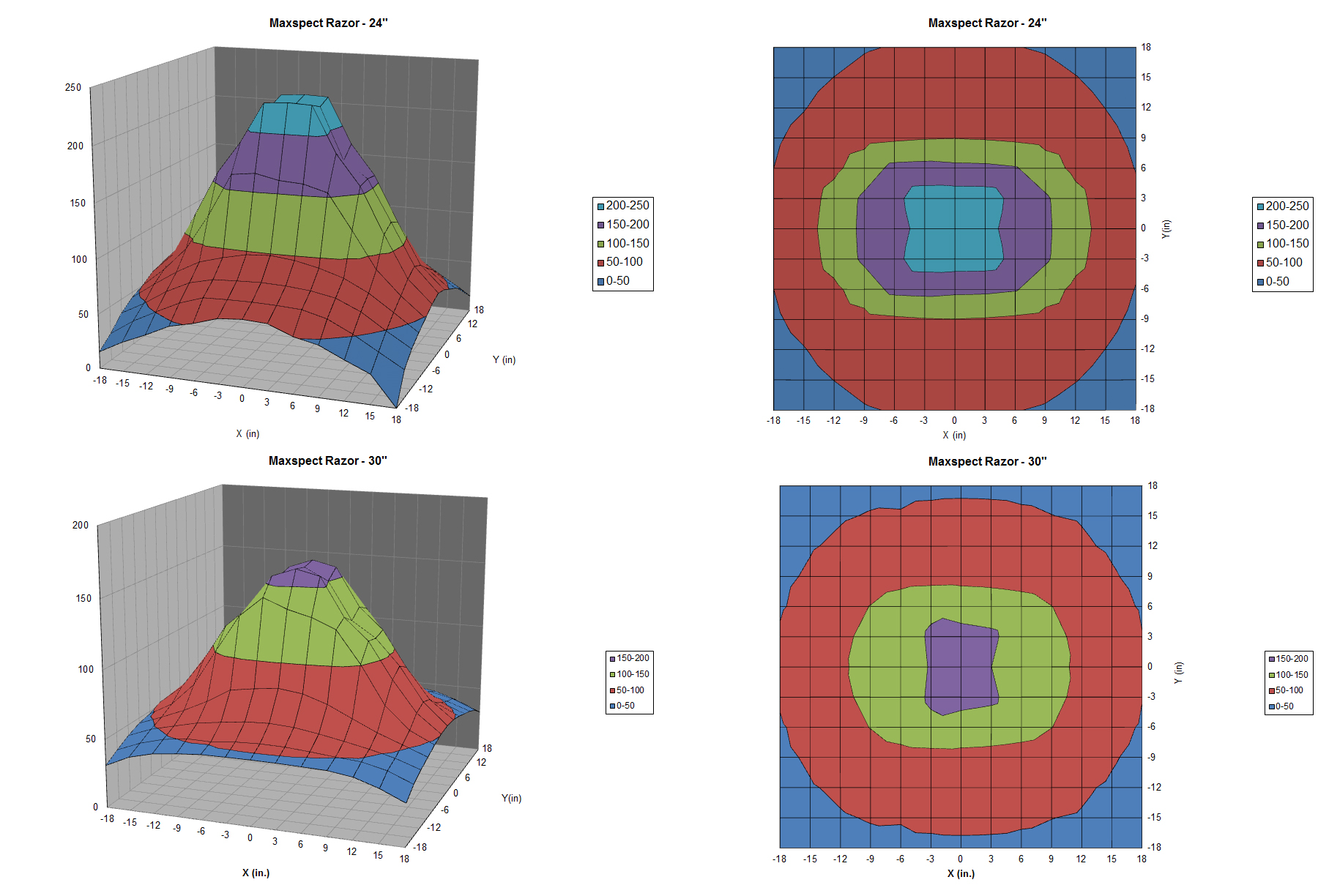 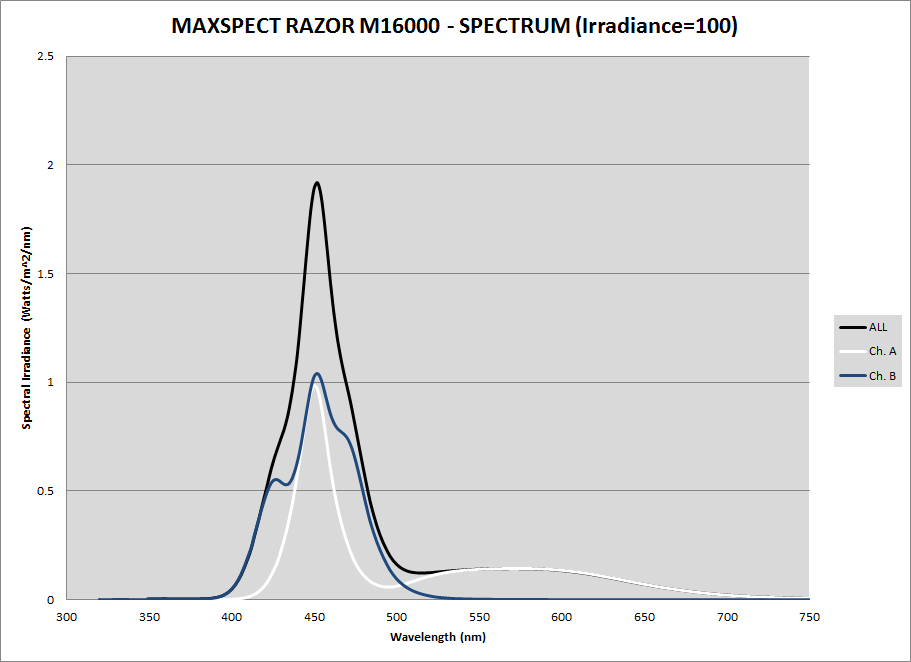 The Aquatic life Expert series 14″ model comprises 24 Cree LED`s: 8-White XPG, 8-Blue XPE, 6-Royal Blue XPE and 2-Red XPE, arranged as shown in Figure 5. The LEDs can be controlled through the The T-Time Software which enables custom programming of the LEDs. . Included in this customization is the ability to create 18 different light color combinations, three 24 hr cycles, control cloud cover, lightning storms and lunar light. Once programmed, the Light Fixture is controlled with the handheld remote. 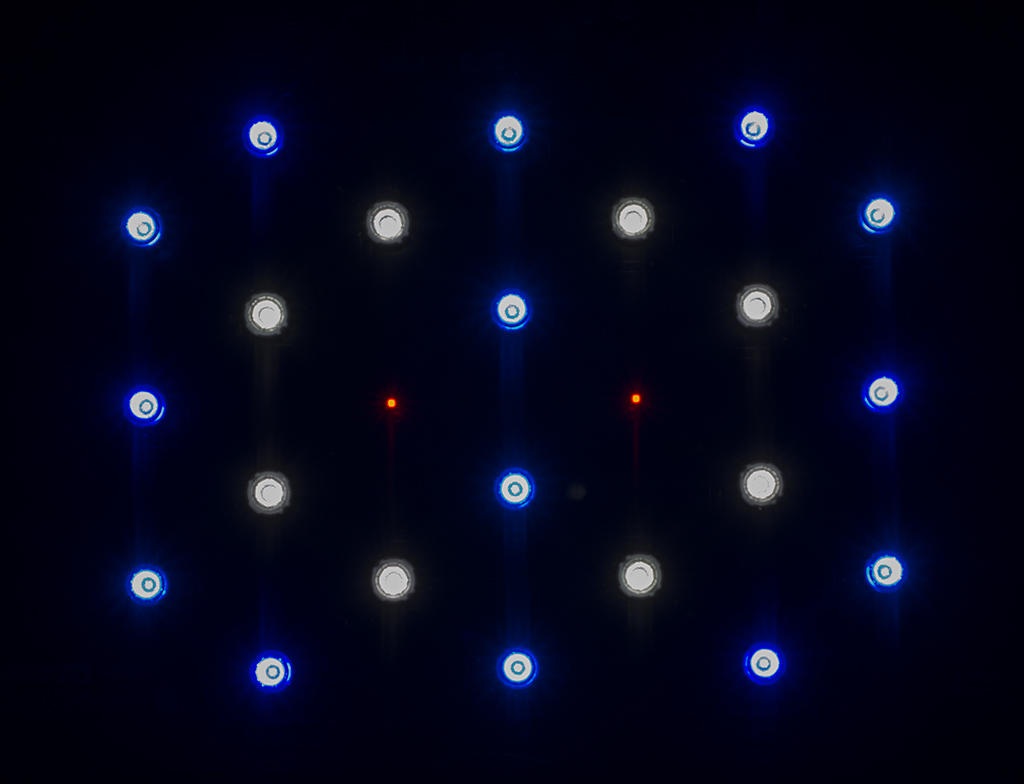 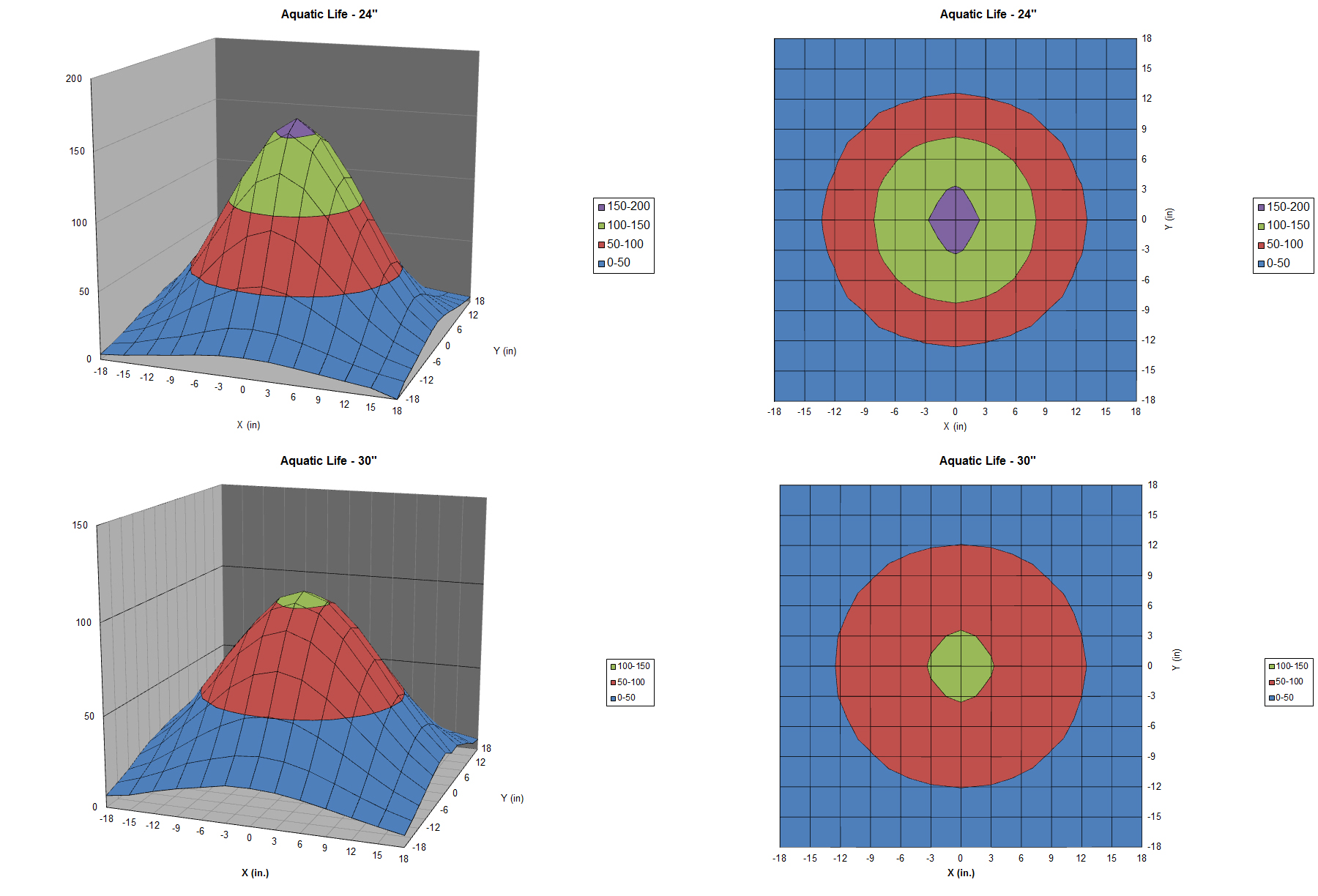 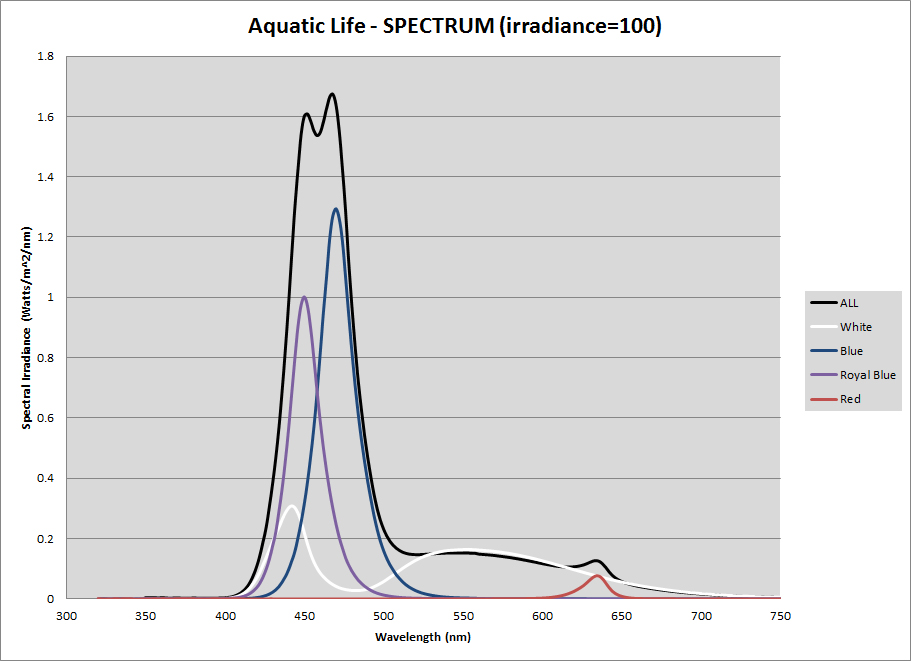 The Tao Tronics has 55 3W LEDs are arranged in an array with 5 rows and 11 columns, with each column containing LEDs of the same color, with 5 columns of Blue LEDs (Total 25) in the 460-470 nm range, and 6 columns of white LEDs (total 30) in the 12000-14000K color range, arranged as shown in Figure 8. The LEDs are operated at around 2W. The controls are simple with 2 channels each allowing ON/OFF control via 2 power cords. One power cord controls the blue and the other the white LEDs as shown in Figure 9. The unit is air cooled with 3 fans.. 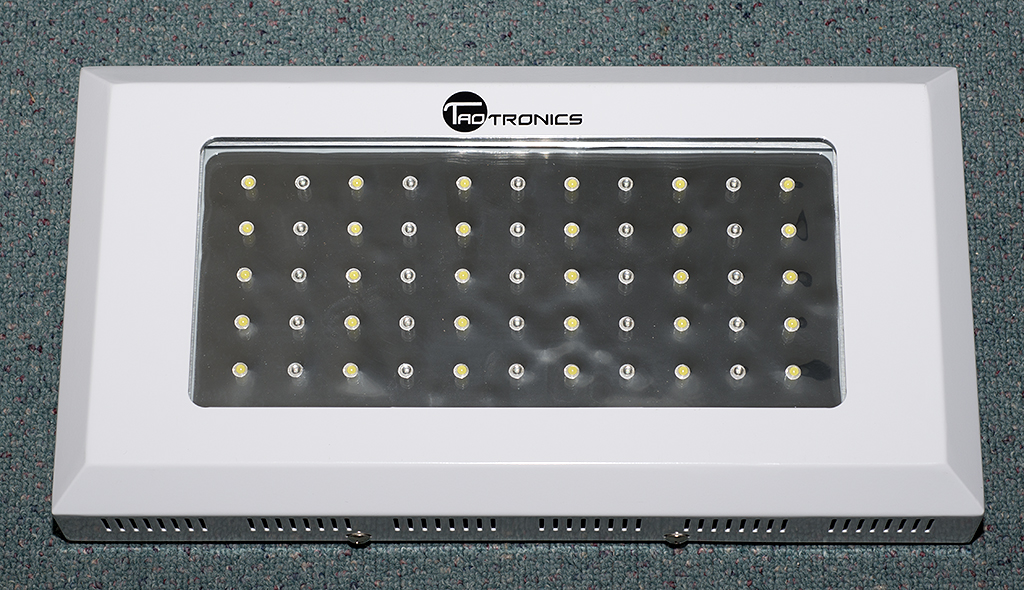 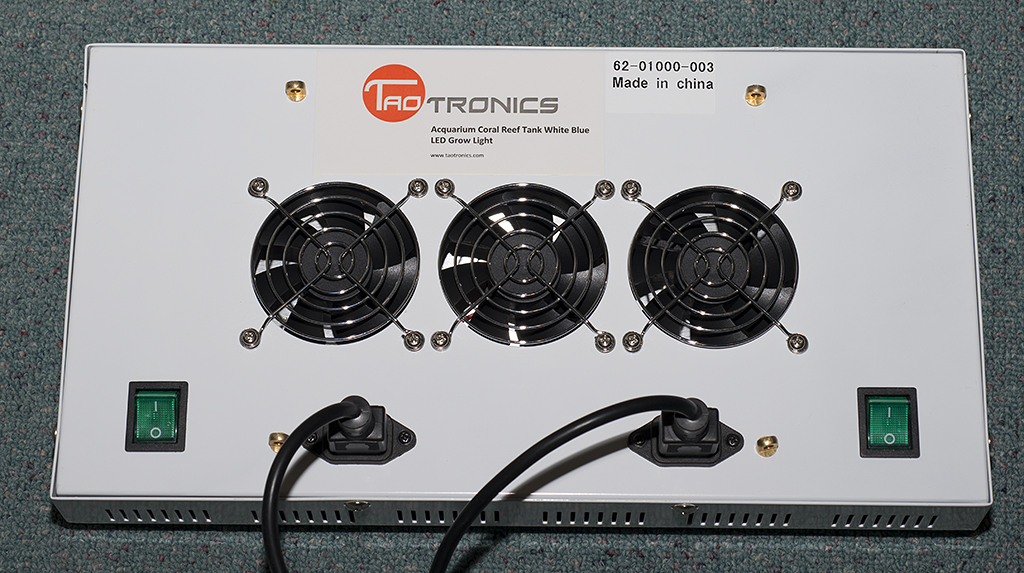 Figure 9. Back side of the Tao Tronics Fixture showing the 3 fans and 2 power cords for the 2 channels of ON/OFF control. 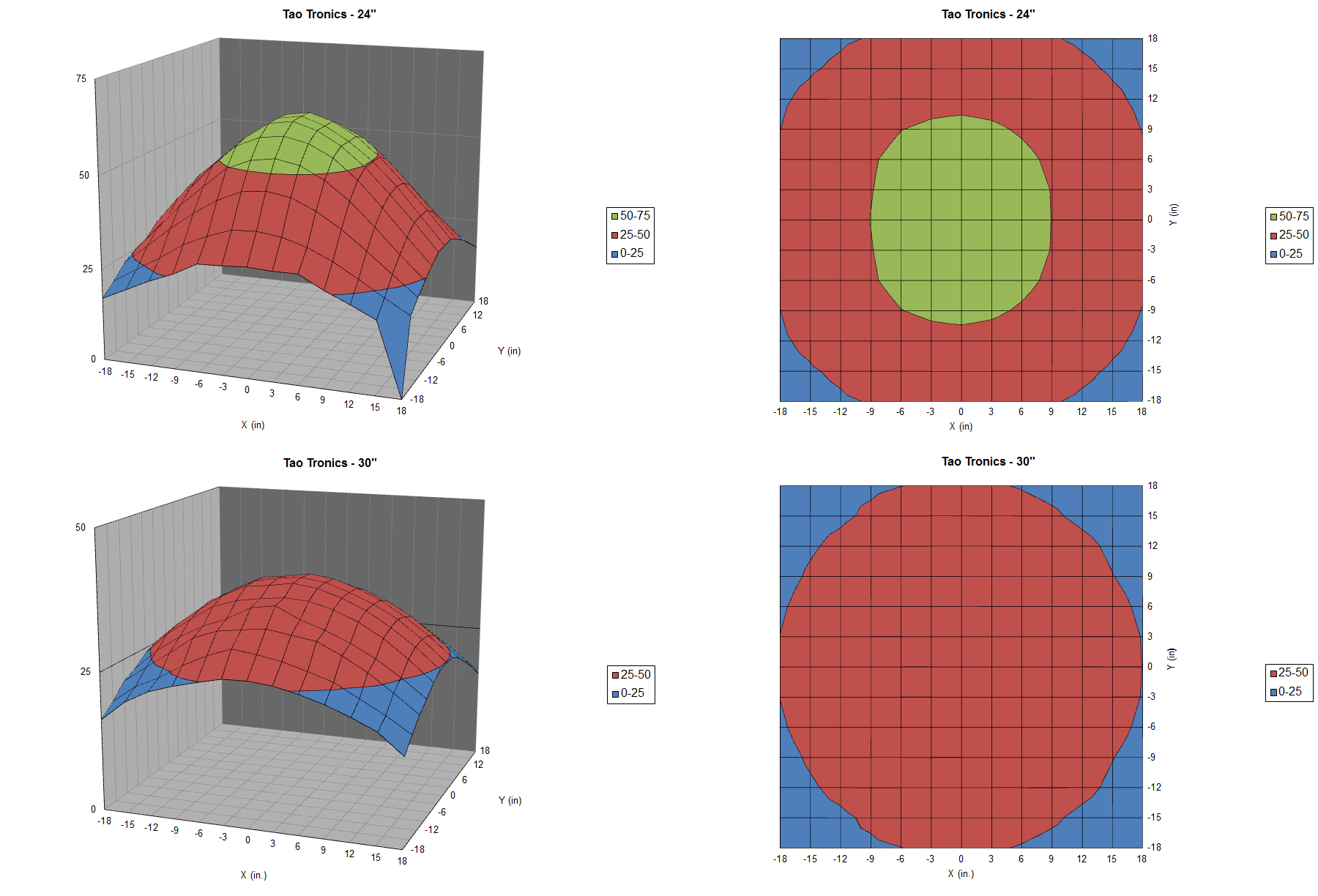 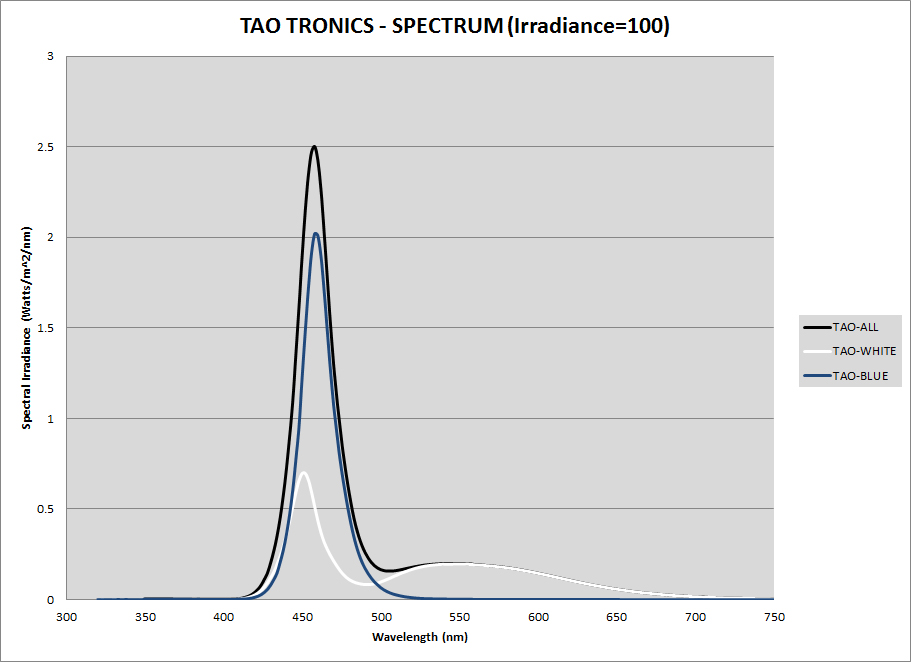 The 3 LEDs tested here, represent a wide range in light output as well as price points. Based on the data the cheaper Tao Tronic LEDs do not use any optics and hence the light measurements at 24″ and 30″ are quite low compared to the other 2. A light such as this only provides white and blue LEDs and is mostly suitable for shallower tanks with the LED fixtures mounted close to the top of the tanks. The Maxspect Razor is an attractively styled light with 6 different LED colors, however the control capabilities are limited to 2 channels. The power draw is fairly high at 192W even though the fixture rating is 160W. The higher power does translate into more light output than the others at distances of 24″ and 30″. The Aquatic Life Expert Series 14″ fixture also provides 4 different LEDs that can be controlled individually through their control software that runs on a computer. Given that is a smaller fixture, the light distribution is smaller than the larger Maxspect Razor. The Aquatic Life Expert Series is also available in larger sizes. The data provided should be useful to aquarists making decisions on LED lighting for their reefs.