Feature Aquarium: Behind the scenes at The Deep Part 1

Read Part II of Richard’s article in the June issue. 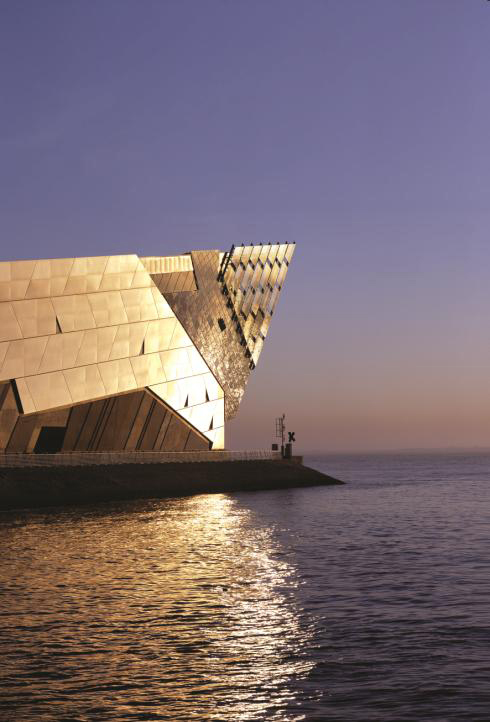 The Deep is built on a former dockside on the estuary of the river Humber. It is an outstanding piece of architecture in its own right. The Humber estuary is still important for trade, but also supports huge numbers of wading birds amongst other wildlife.

You may remember a thing called the Millennium; it caused a lot of fuss and cost a lot of money and things pretty much carried on as before. To celebrate, several large scale, publically funded projects were established across the UK. Some of these were notable failures, yet there were quite a few successes. One thinks of the Eden Project and the London Eye as two of the most successful, both being commercially viable and well received by those who footed the bill – us. Opening just a little after the official millennium celebrations in 2002, a new contender for success achieved its annual visitor number target in just 3 months, precipitating a whole new extension. It is one that is proudly in the North of England: The Deep in Hull.

The Deep is one of the most respected public aquaria in the country, its research and conservation programs are second to none and its charitable trust status means that all the profits from its 350,000 visitors per year go straight back into creating new displays, the well-being and care of its collection and its worldwide and local education as well as awareness raising projects.

I was lucky enough to have a behind the scenes tour in the company of Linda Martin The Deep’s Communications Director and Katy Duke the visitor attraction’s curator, who led me through a maze of rooms and behind the scenes spaces that were fascinating, mind boggling or both. In this two part piece I’m going to focus on the tanks themselves, the filtration and care requirements of the fish and will explore the Deep’s captive breeding programmes and conservation work in the next edition.

Linda led us through numerous fire doors and we emerged into one of the main service rooms that sit amongst three floors of plant and equipment that services the main tank, known as ‘Endless Oceans’, where we met Katy Duke the aquarium’s highly experienced Curator. The first thing Katy showed us and talked about was the Deep’s insistence on feeding the best quality ingredients to her charges. Some ingredients on the menu would be familiar to the average hobbyist such as mysis, krill, cockles and so forth, but items such as hermit crab tails might not be. 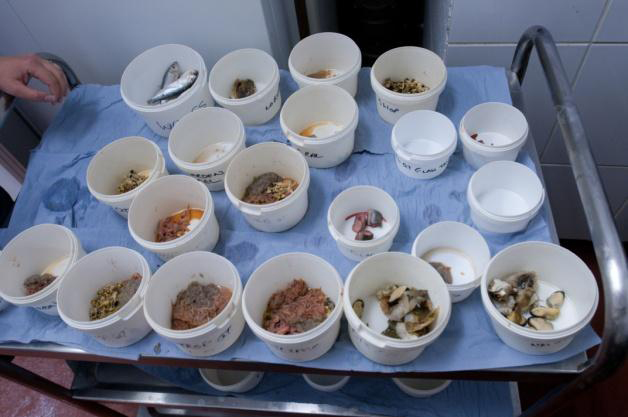 A varied diet, each tank and often each fish has a unique feeding plan.

This matching of diets to those found naturally is important, in Katy’s opinion, for the health, growth and vigour of the fish. All the food is enriched with FishVits from Zoolife and is sourced as locally and sustainably as possible. The amount of food given is very closely monitored, based on estimates of energy usage and individual species requirements, to ensure good healthy growth, but to avoid metabolic and physical disorders from over feeding. Physically feeding the fish is a science/art form in its own and we’ll come onto that later.

Just past the food prep area is the Deep’s water mixing tank – all 30m3 of it! That’s 30,000 litres of reverse osmosis (RO) water to be mixed with a ton of salt, by hand, twice a week! Needless to say, the RO filters are of a prodigious size as well. The Deep uses Tropic Marin salt and enjoys a close working relationship with the company, using several of their larger commercial ultra violet steriliser systems in some tanks and displays. 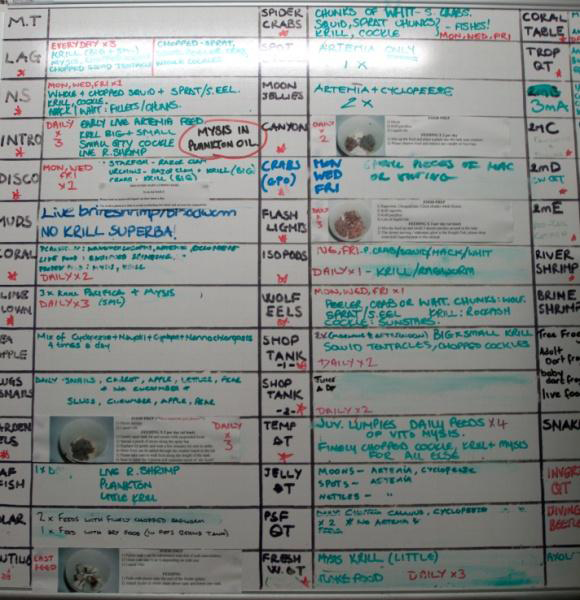 This room also holds several large isolated systems for caring for individual fish, acclimation of new arrivals and quarantine, each one serviced by a filtration system that in normal circumstances would be described as enormous and would be beyond the wildest dreams of most aquarists, yet they contain the same basic ingredients as we have at home; physical filtration, carbon reactor, heater, ozoniser and so forth. Nothing that we aren’t used to, it’s just on a grander scale. This level of the building also houses a series of quarantine tanks and the Kreisel tanks used to raise jellyfish.

On leaving this room, we found ourselves looking down onto the Deep’s pride and joy, ‘Endless Oceans’. This tank is simply vast, holding a staggering 2.4 million litres and takes a whopping 87 tons of salt to achieve a salinity of 33ppt. Carrying out a monthly water change of 12%, through several daily changes and backwashes of the filters, involves a significant amount of effort in itself. They cannot dispose of this amount of water without a licence and the Deep are very keen to ensure the water is ‘nuked’ with ozone to an ORP of between 700-800 mV to ensure there is no harm to the estuary. 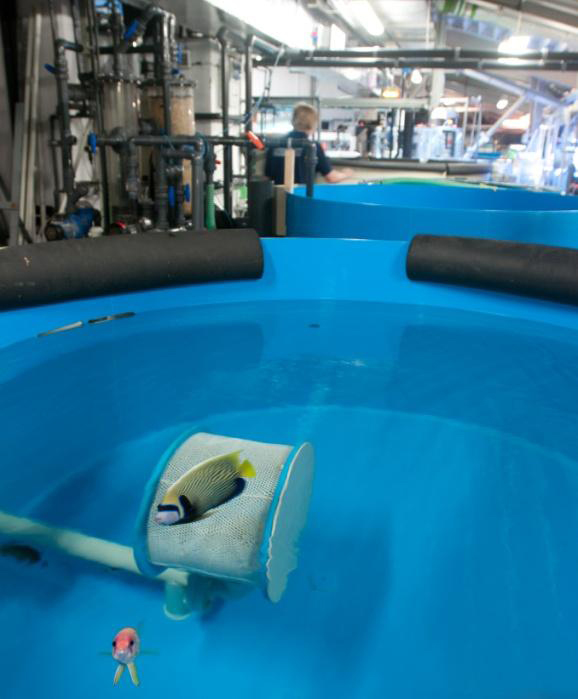 An emperor angel (Pomacanthus imperator) awaits returning to the Lagoon.

The shark and ray collection is certainly impressive and particularly fascinating to younger visitors. To ensure the fish aren’t stressed, photographers are not allowed to use flash so, getting a good shot wasn’t easy.

It’s worth returning to the issue of feeding here. Over and above the four daily scatter feeds from the top of the tank, the fourteen aquarists also hand feed (using SCUBA) four times per week.

Understandably, this activity forms part of The Deep’s education programme and was fascinating to young and old alike. To feed the fish takes months of training (I was politely but firmly denied permission to don my scuba gear), for the humans and for the fish to ensure safety for all. To ensure the fish are fed correctly and calmly, they are trained to adopt certain behaviour and position in the water before food is offered and these protocols are strictly adhered to, in order to make hand feeding as safe as possible. The rays for example have learnt that they will only be fed if they are resting on the substrate in front of the diver who is feeding.

The vast size of ‘Endless Oceans’ means it requires equally vast filtration and what was, when constructed, the world’s largest protein skimmer! As Katy led me towards the skimmer I was expecting to see a large acrylic tube, but there was a wall in the way… no, this was the skimmer itself! At over eleven metres tall the skimmer actually protrudes slightly from the top of the building and has an air intake of 115m3 per hour, using 5m3 of ozone per hour. Needless to say, the main ozoniser was enormous too and electronic ‘sniffers’ constantly monitor the air in the plant rooms in case ozone is released though, as the ozoniser uses vacuum generation, this is highly unlikely. 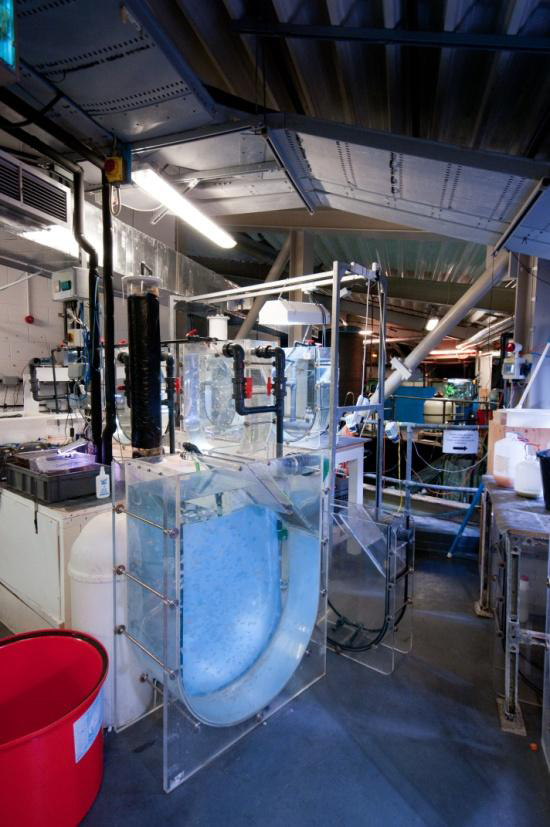 One of several Kreisel tanks designed by the Deep team and manufactured locally. Raising jellies takes an awful lot of time and commitment (to be explored in the next issue of UltraMarine).

The team members service much of the equipment themselves including the various pumps that feed the baffling array of pipe work and have been involved at all stages of the design and construction of the various systems. Katy admits she sometimes wakes up at four a.m. wondering if she turned off such and such a valve – it must be an awesome responsibility. You can understand why 24 hour security cover and a computerised SCADA monitoring system on all the life support systems are essential.

The second largest marine system on site and the one which would be of most interest to marine aquarists is likely to be ‘The Lagoon’. Visitors can walk around a curved acrylic wall which replicates conditions on a tropical back reef, before they walk down to view the reef wall itself. This system has some beautiful shoals of tangs among other reef fishes. There are no invertebrates here – the corals are reproductions – but even so, the tank is certainly impressive and it was great to watch cleaner wrasse operating a cleaning station as they would in the wild.

‘The Lagoon’ is run through its own dedicated filtration system and, whilst Katy was showing us the ‘off’ button, I asked her whether she had a fish tank at home. She told me that she used to – as did most of the staff at one time – but now even dreads looking after her neighbour’s goldfish!

‘Endless Oceans’ was until recently the deepest aquarium in Europe at over ten metres deep. Visitors can take a lift which appears to pass through the tank.

There is no doubt that the commitment of The Deep’s staff, and its creation as a conservation and education-led operation, make it one of the best aquariums in Europe. Open for 363 days a year, and with a very nice restaurant, and gift shop I really would recommend The Deep to anyone with even a passing interest in the marine world. In the next instalment of this article I’ll look more closely at some of The Deep’s conservation projects.

For further information, opening times and prices, how to book school visits, weddings, or even enjoy a meal in front of the main tank, please see The Deep’s website: http://www.thedeep.co.uk/. iPhone and Android users can also download an app called iDeep, packed with information about the exhibits. 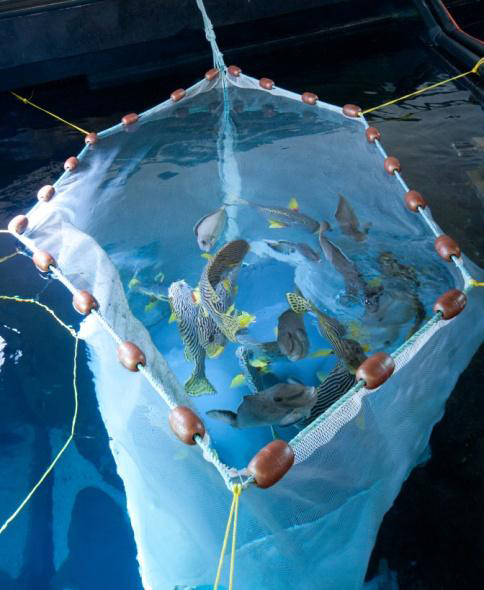 Introducing new fish isn’t easy with so many potential predators around. Here, shoals of naso tang (Naso tuberosus) and Goldman’s sweet lips (Plectorhinchus goldmani) are safely adjusting after acclimation to their surroundings before being released into the ten metre deep tank. These fish, imported by TMC, have spent a substantial time in QT on site and look in excellent health. 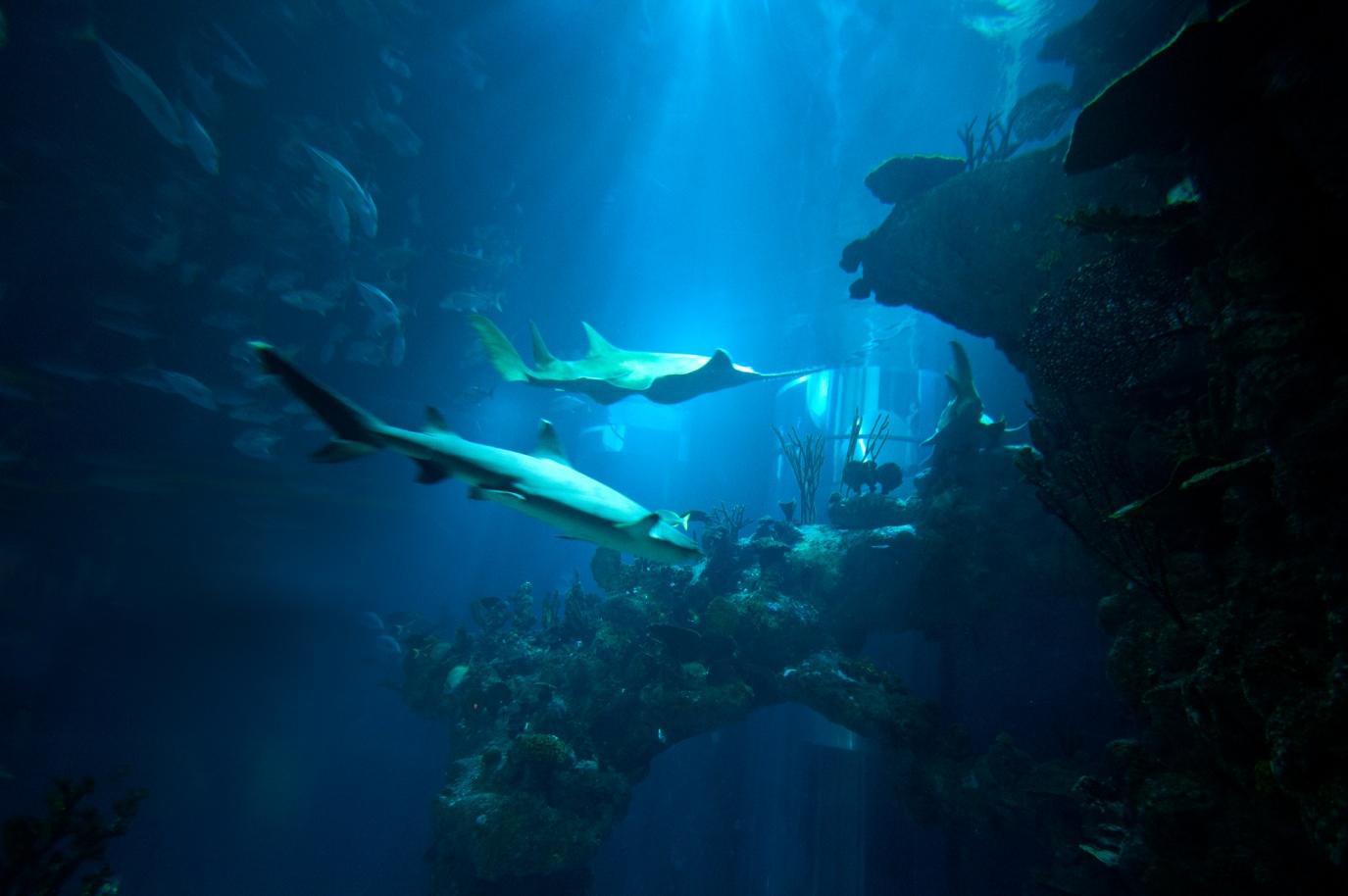 A white tip reef shark and a green sawfish patrol the tank. 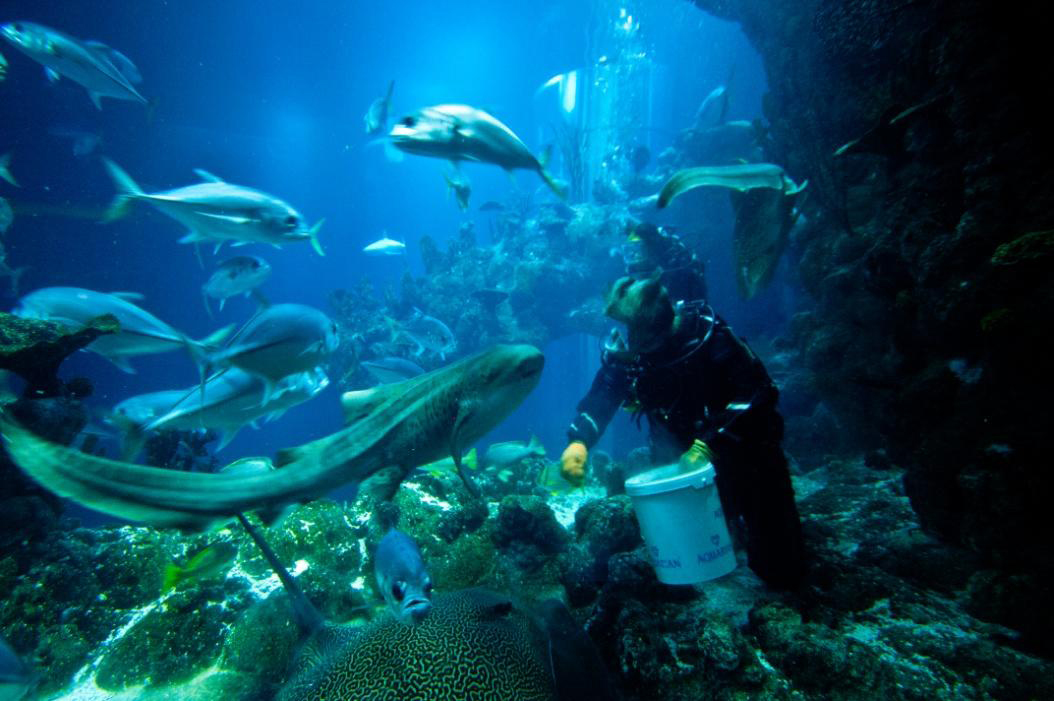 A zebra shark approaches for a feeding. The amount of food given is memorised by the diver and then recorded onto a spreadsheet at the end of the dive. 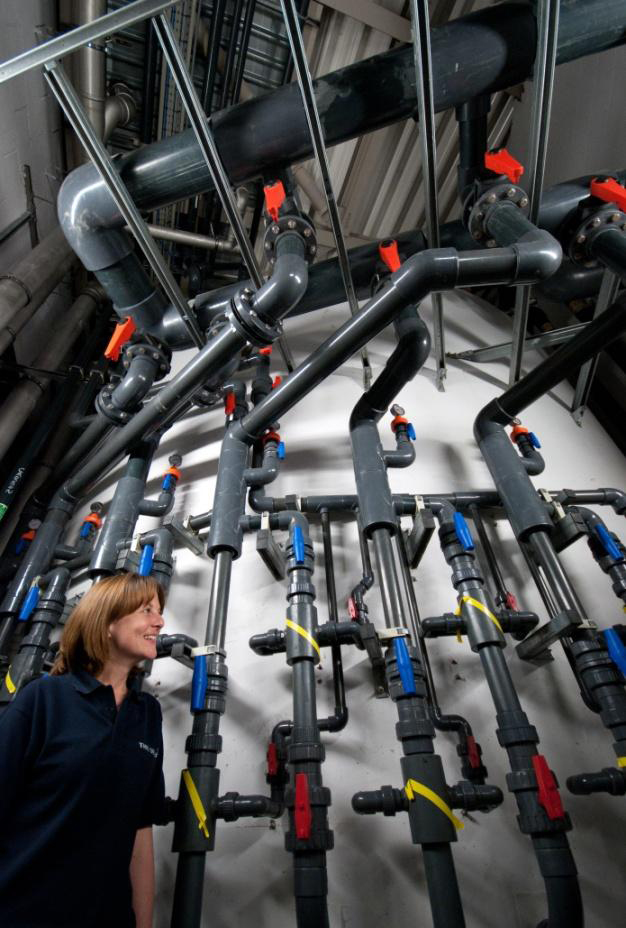 The skimmer can be accessed on three floors. Here Katy Duke poses next to the water/air injection manifold on floor two. 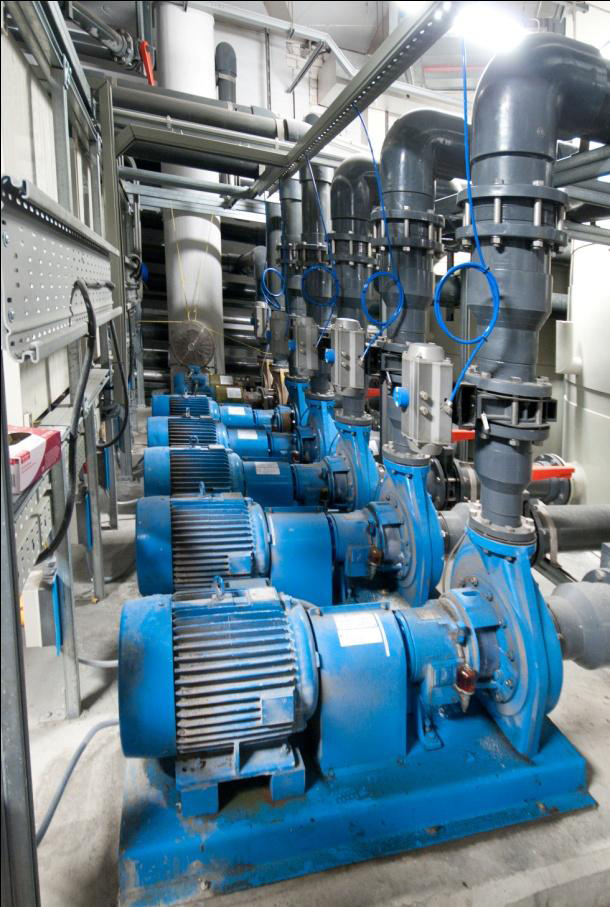 Skimmed water is fed back to the main system through five huge pumps. 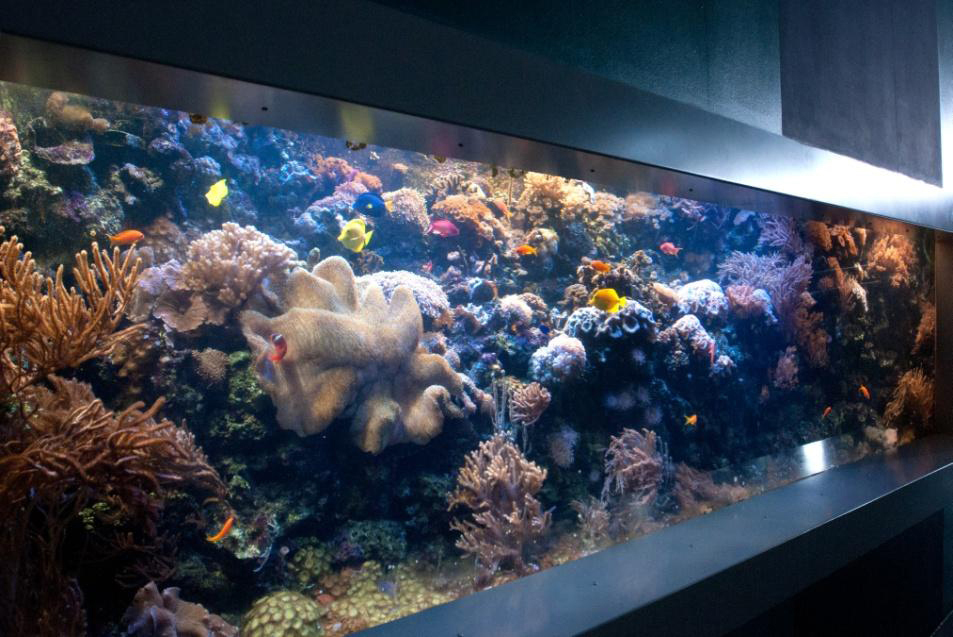 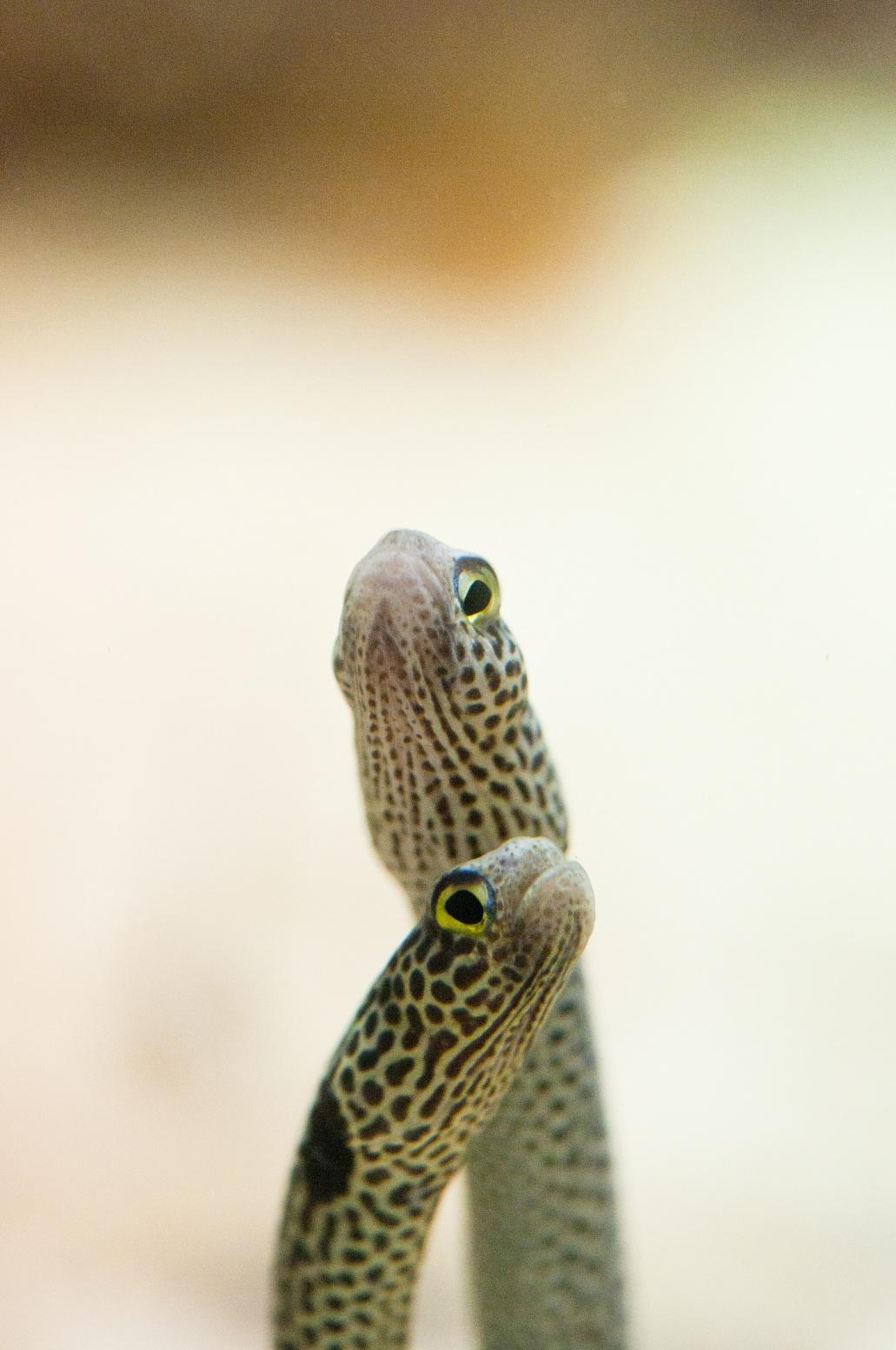 Along with ‘Endless Oceans’, The Deep has many other tanks, terrariums and paludariums too numerous to mention here, both freshwater and marine. Displays range from deep ocean fauna such as nautilus, a large Amazon biotope system, Kreisel type jellyfish tanks, a very relaxing and enjoyable UK (North Sea) native biotope system and among other smaller tanks a system for garden eels (Heterogonger cobra), which I found thoroughly charming and a lot easier to photograph in captivity than in the wild. 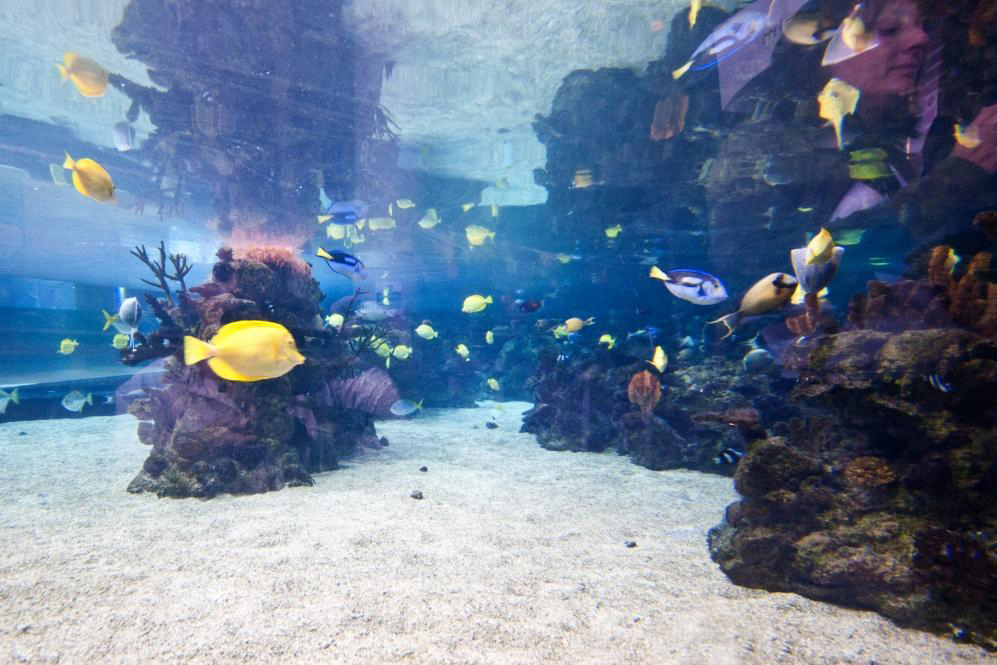 Yellow tang (Zebrasoma flavescens), regal tang (Paracanthurus hepatus), brown tang (A. nigrofuscus) and other species such as a gorgeous emperor angel and a large lined surgeon (A. lineatus) are found in the shallow section of ‘The Lagoon’ system. 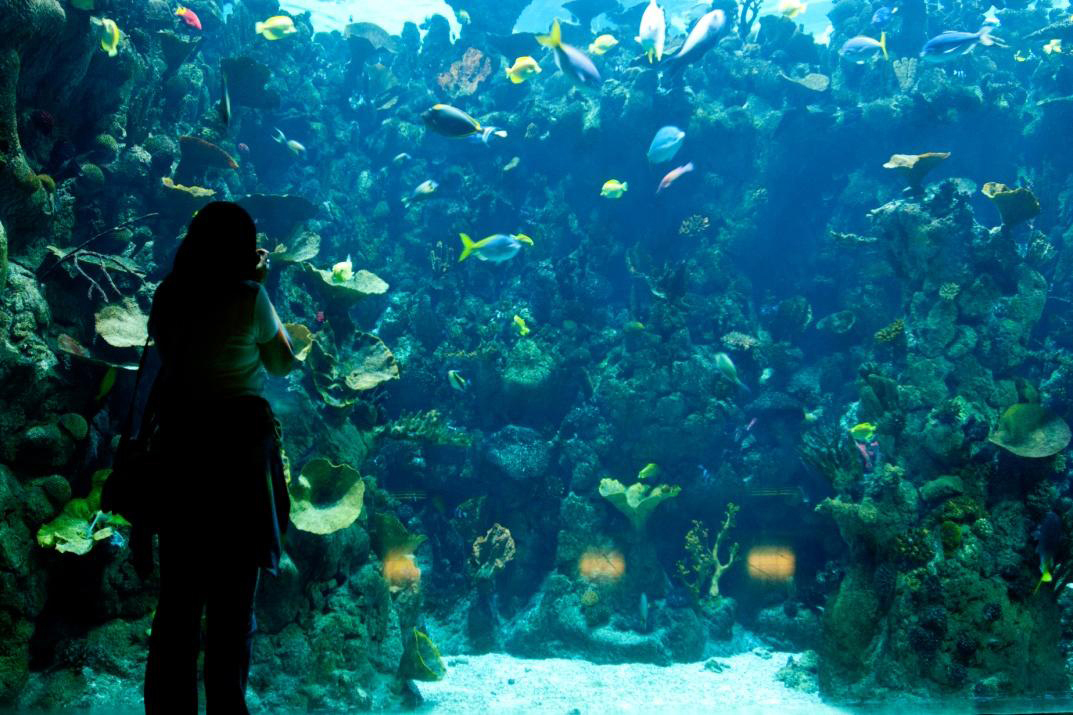 Drop down a storey and you can enjoy the lower section of ‘The Lagoon’. 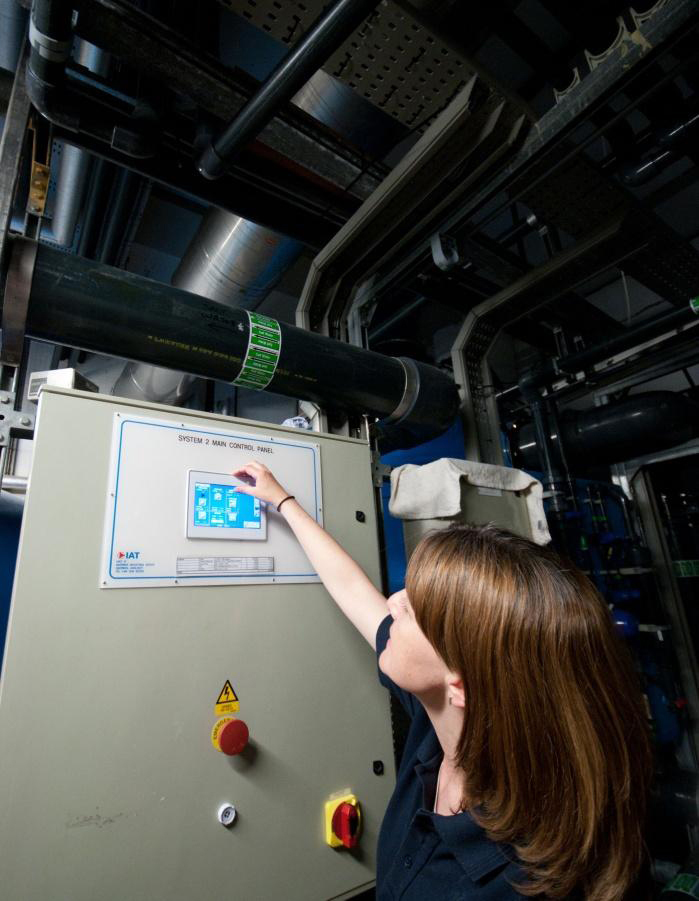 Katy shows us the control system from IAT, for ‘The Lagoon’. If The Deep’s power supply goes off they have about eight hours before things get critical, which fortunately has never happened. If the team need to turn off these systems, it can take over two hours to get the water where it should be and the flows balanced again. Automatic fail-safes help ensure things don’t go too wrong in case of emergency and backup generators are on hand. The control panels allow everything from pump speed, skimmer height and temperature to be adjusted by touch screen. 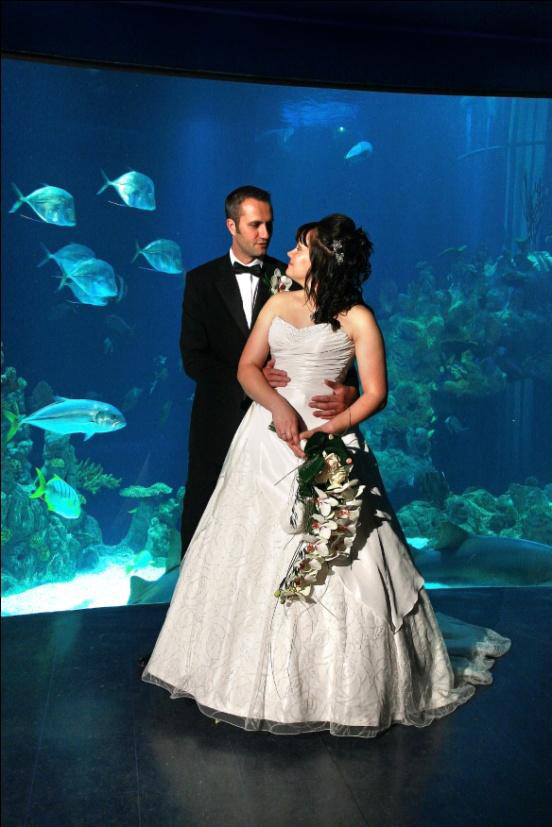 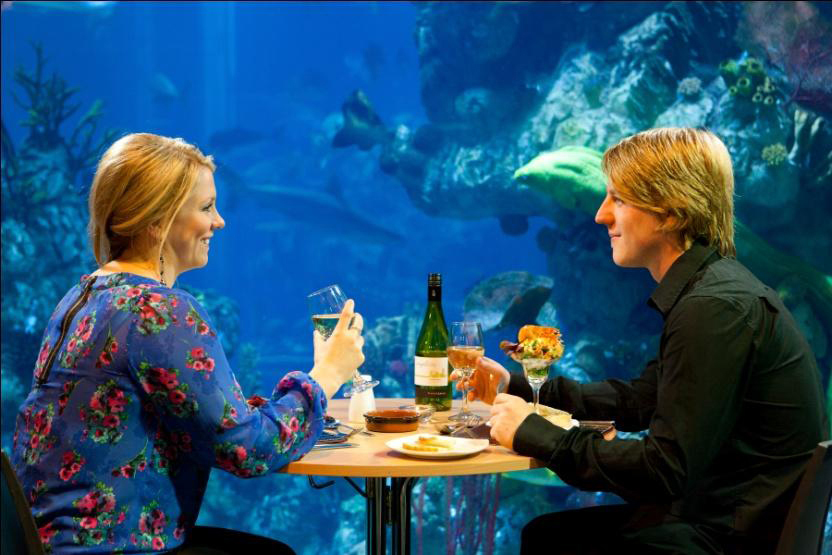