Feature Aquarium: Follow-up On The Featured Aquarium Of J. Daniels

In the past 30 days since my tank was featured I have had some great changes. Both of my rose bubble tip anemones ( E. quadricolor ) split. What started out seemingly as just a simple change of location turned out to be the primary anemone cloning itself. 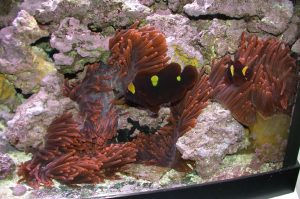 I unfortunately didn’t take very good pictures of the first or second split. The images I did take were more for showing some friends what was happening. In the future I will setup the tripod and take sequenced photos of a split. I am confident that the anemones will experience a split again in the future given the history of these particular clones.

These are at least 4th generation clones and one is now a 5th generation captive raised clone. All are recovering quite well now and two will be removed to other reef tanks in the very near future.

The anemones first started to split mid week on the 25th of March. The larger of the two started to split first. It had receded under the rocks and at first I thought it was moving toward the back of the tank. I noticed that it was not attached to the rock at all. I placed it in the front of the other still intact anemone on the glass bottom to watch it. At this point it looked more like something had attacked its foot rather than the anemone preparing to divide. 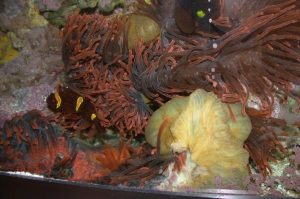 Two days later the other anemone took on a shrunken up damaged appearance. This time it was obvious that what ever had triggered the first anemone to divide had done so in the second anemone. The division took much longer and was an arduous one. The anemone clearly struggled to divide. It appeared at one point to be dividing into three distinct animals. I was left to decide whether to intervene or let it be…I decided to cut the thinnest point of the two largest pieces and let the other dividing point remain intact.

This was clearly the right decision. The two pieces moved away and the lower and smaller of the two moved back and away and recovered quickly. The higher and larger of the two pieces remained in a struggle to either divide again or reform. I decided to assist again, but this time I moved the lower portion of the foot up closer to the other end. This too was the correct thing to do, instead of cutting it. The animal is recovering and is looking much healthier. 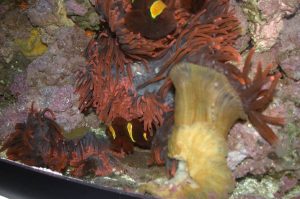 All four anemones are now recovering and all appear to have reconnected their feet and are moving to their new preferred locations in the “Anemone Row.”

I have been repeatedly asked, “What caused or triggered them to split? Did you make any changes to the tank? Add any chemicals? Food? Anything?” And in short, no I cannot think of any one thing that was done out of the usual except that I did increase the flow into and out of the tank. The anemones are still able to freely move about the tank as I have now turned off the power head, which I was using to contain them. They are not moving at this point so I will try to keep the power head off and hopefully remove it from the tank.

My care and feeding of the anemones is very simple — I do nothing. I do not directly feed them. Their only source of food comes from the water column during tank feedings and what ever waste or dropped food they may consume from the maroon clown fishes ( Premnas biaculeatus ) that are their symbionts.