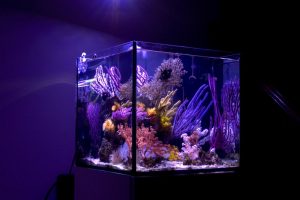 Elos Mini at the 1 year mark.

My non-photosynthetic reef system started in May 2009 with a complete Elos Mini 20 gallon setup. The original plan was just to keep a few non-photosynthetic corals such as Dendrophllyia spp. and Tubastrea spp. This plan didn’t last long as I was drawn to the more difficult gorgonians and even soft corals which were considered impossible by most. The challenge of keeping a non-photosynthetic reef was not something I took lightly. I spent countless hours researching, experimenting and observing.

In the beginning, I lived with the constant worry of livestock dying and the tank crashing due to the heavy feedings. I worried when I didn’t see polyp extension, which seemed unpredictable. I worried when the water got cloudy, which happened quite often. Many times, the worries were validated with minor system crashes and losses of livestock. However, as my understanding of these unique creatures grew, my Elos Mini matured and blossomed into a full blown non-photosynthetic nano reef, filled with thriving corals. 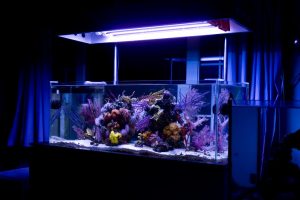 The main upgrade is complete.

At this point, I knew what worked, but it wasn’t practical in the long run. My daily routine consisted of target feeding my corals almost every time I walked by the tank, in addition to continuous feeding with various mechanisms including syringe pumps and dosing pumps. I also performed daily water changes. In the beginning, I enjoyed it, but after several months, even as beautiful as the tank was, I didn’t find myself enjoying it as much as I should. The daily work was causing me to burn out and I knew I had to automate my system in order to stay in the hobby.

Planning for the upgrade started in January 2010 when I acquired an ADA 65 gallon aquarium. Combined with the 20 gallon Elos Mini, a 40 gallon refugium and a 30 gallon sump, the total capacity was 155 gallons. From the start, I knew that I had to automate the feeding and water changes. As a veterinary student getting ready to enter clinical rotations, there was no other way I would have the time to keep a non-photosynthetic reef. 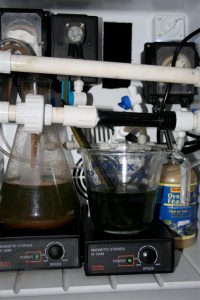 For the water changes, I employed a Litermeter III with remote pump module and water level sensor. It changes the water at a rate of 5 gallons per day in 15 minute intervals. The automatic feeding is accomplished by using a dorm refrigerator which is drilled to have part of the water return line from the sump running through it. Inside this refrigerator there are 3 peristaltic dosing pumps that pump food directly into the return line. This system was originally developed by Steve Weast and later adapted by Michael Lukaczyn, with further modifications by Matt Wandell. The pumps are controlled by a Reefkeeper Lite to feed the tank over 22 times per day. With the water changes and feeding taken care of automatically, I can spend less than 5 minutes on the tank per day, and I am able to leave the tank in the care of even a non-reef savvy person for weeks at a time.

Flow for the main display tank consists of an ATB Flowstar 1500 return pump and 3 vortech mp10w ES pumps. The Vortechs are situated in a way to create a gyre circling the rockwork in the middle of the tank. They are run in long pulse mode so that the direction of the gyre switches about every minute. Ideally I would like the flow to stay in one direction longer, but the controller is limited in this way.

Filtration is handled with an ATB Medium cone skimmer with Airstar 1300 pump. I initially thought the skimmer would be too large for the system but it has turned out, if anything, to be slightly undersized. The bioload of this system is just enormous for its water volume. To help control extremely high nutrient levels, I have also started dosing KZ Zeostart2 which is increasing the volume and noxious smell of the skimmate. I empty the large skimmer cup 2 – 3 times weekly and clean the neck at this time as well. A large skimmate collector and automatic neck cleaner would truly serve their purpose with this system. 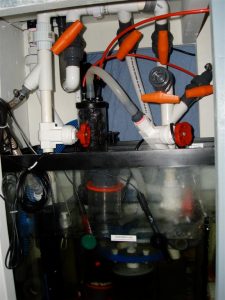 One of the key elements I found to have positive effects when running the Elos Mini was the implementation of ozone. Within one week of running ozone in the Elos I noticed increased polyp extension all across the board, from Dendrophyllia to Dendronephthya. My belief is that the quick and massive buildup of organic compounds in the water as well as chemical warfare can interfere with normal feeding behavior. I find this to be more important than nitrates and phosphates (this does not mean nitrates and phosphates do not have to be controlled as well). I continue to run ozone in the system with an Ozotech Poseidon adjustable ozonizer, which reacts with the water in an Aqua Medic 1000 pressurized CO2 reactor and is filtered out

by activated carbon in an ATB spongeless media reactor. 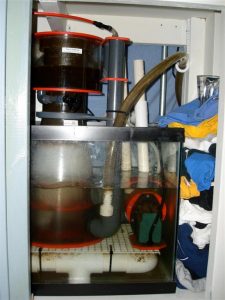 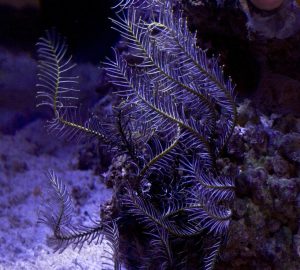 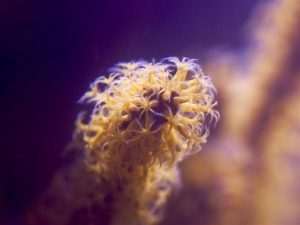 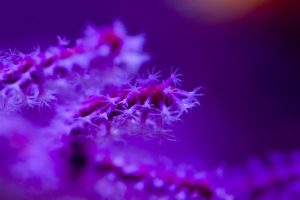 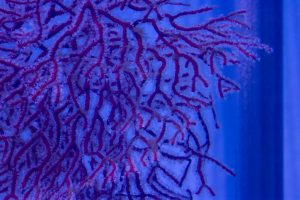 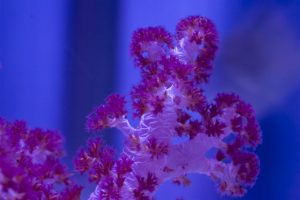 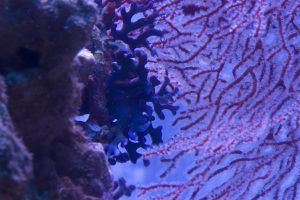 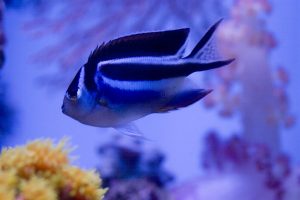 The Occupants: Old and New

The main display tank, the ADA 120-P is stocked with a combination of non-photosynthetic corals I have had in my care for well over a year and newer corals that I have collected over the past 6 months. Some of the gorgonians had to be peeled off of the rocks and the glass in the Elos Mini due to their encrusting growth during my care. These include Diodogorgia nodulifera, Menella sp., Guaiagorgia sp. and Swiftia exserta. 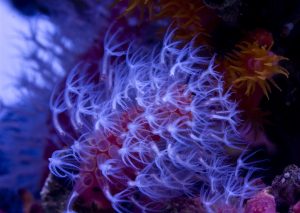 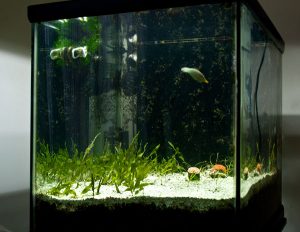 One of my main goals with the system is to successfully keep Dendronephthya corals. Success with this coral has to be a relative term since so little is known about them. I consider success at this time to be an increase in polyps and overall mass over the course of 1 year or more. Its very possible that in the future success will be defined as something completely different. We only need to look at the history of SPS keeping in captivity to know this. At this time I have 4 Dendronephthya corals in my care. Other soft corals include Paraminabea spp., Nephthyigorgia sp. and Scleronephthya sp. I also have a Cirrhipathes spiralis black coral which likely hosts zooxanthellae but may or may not be photosynthetic. There are even some photosynthetic Palythoa sp. and Sacrophyton sp. that came as hitchhikers. It should be noted that many non-photosynthetic corals can be found right alongside photosynthetic corals in nature. 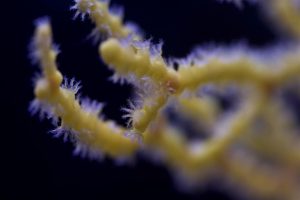 To add to the biodiversity of the system and assist with filtration, I added a 40 gallon refugium featuring a 6″ deep mud/sand bed, Caulerpa, Ulva, and Halodule seagrass. Every morning when the lights for the refugium come on, the glass is completely covered in tiny copepods. The refugium also houses a pair of Apogon parvulus, an Ecsenius stigmatura, and an Oxymonacanthus longirostris which has been eating prepared foods for over 1.5 years. All of the fish in the refugium are plump from the continuous feedings of plankton.

The tank that started it all, the Elos Mini, is also still running and connected to the system. Although most of the inhabitants from the Elos Mini have been transferred to the newer tank, it is currently being stocked with creatures that will add to the biodiversity, filtration and food production of the entire system. These include sponges, tunicates and Actinia tenebrosa anemones. To help control the massive bristleworm population, an ORA Pseudochromis aldabraensis was added although it seems to be too content with the regular feedings to bother chasing after worms.

I would like to thank Reefs.org and Advanced Aquarist’s Online Magazine for giving me the opportunity to share my pride and joy with other Aquarists around the world. I hope that I can be an inspiration for others to take on the challenge of non-photosynthetic reef keeping.