My second reef aquarium, “Bonsai Reef”, was established January, 2001, at the development lab where I work. The tank itself is an AGA 7 gallon mini-bow with the built-in stand and a modified light hood. It contains about 10 pounds of Fiji live rock and 5 pounds (1″ deep) of mixed grain live sand. There is no sump or skimmer on this tank. Its simplicity has made it a total pleasure to enjoy, and it has even provided some coral fragments for other hobbyists. 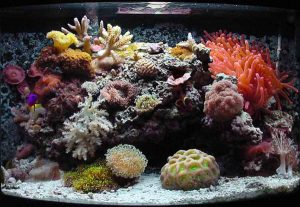 It was “love at first sight” with the mini-bow, one of those things you just have to have… However, with my 3 year old 120 gallon “Mistress Reef” taking up more than its fair share of time at home, my work place seemed the next best location for its home. The goal of this nano-reef was to keep it simple, cheap, easy to maintain, and easy to move. Neatness wasn’t as important in the lab, so the outside was allowed to look like a science experiment with top-off hoses and wires.

An Aquaclear 200 HOB filter gently and continuously returns about 100gph of water from the rear top center of the tank. Additional water movement is provided by a Mini-jet 606 which is half buried on the bottom right side. It connects to an off-the-shelf Fluval spraybar I picked up at my LFS. The plastic tube has 1/8″ holes drilled about every inch and runs the full length of the back wall above the sand to circulate water behind the liverock. This pump is on a timer which cycles at 1 minute intervals.

The tank is lit with 64 watts of PC lighting; one 32watt 10K and one 32watt “ultra” actinic powered by a Fulham WH5 electronic ballast. Both lamps come on together for 11 hours per day (via timer). I built a plastic canopy from 1/8″ ABS and included the OEM front end to maintain a stock appearance, yet be able to fit more lamps under the hood. There are holes which allow air to circulate across the top of the water, but a 3/32″ piece of picture flame glass isolates the lights. Two 1.5″ PC fans keep the light cavity cool, and come on with the lights. 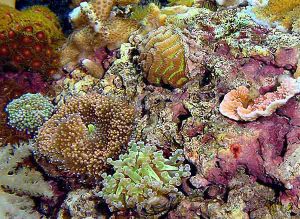 In addition to the live rock, I keep a nearly useless foam block in the HOB filter, along with a reusable bag containing 1/4cup of Matrix Carbon. These are cleaned/replaced once a week. I didn’t want to take up valuable space with a DSB, though the sand is populated with spaghetti worms to aid clean up. I initially planned to run a skimmer, but the bioload is light enough that it doesn’t appear to be necessary. Macroalgae has never been added (personal taste), though it is definitely a viable option if nutrient export becomes a problem.

I dose 2-3 ml each part of B-ionic every day I’m at work (usually 6 out of 7). That’s it., unless you consider water changes additives…Water top-off is critical on such a small tank, so to keep evaporation reasonable, I don’t force air across the water, and there is glass under the lights. Still, it consumes about 10oz of fresh water per day, or about 1 drop every 8-10 seconds from the top-off reservoir. My next project is to inconspicuously automate this chore! All the water is RO/DI and brought in from home.

About 30 different animals call this little tank home. Fish (2): A gold-stripe maroon clown (Premnas biaculeatus) and a royal gramma (Gramma loreto). Mobile inverts: Emerald crab, 3″ tiger tail cucumber, and a few snails and hermits. I had a banded coral shrimp for over a year, but it grew too large for the tank, and was traded in. All corals except the Favia are captive grown from frags. .Hard corals: Six SPS consisting of Acropora and Montipora, and 4 LPS including E. divisa, Leptoria, Blastomussa, Caulastria, Favia. Soft corals: Assorted zooanthid polyps, Discosoma sp. mushrooms, Briareum sp. metallic star polyps, Ricordea floridea and Ricordea huma, Capnella, and Sinuaria. The center piece of the tank is a 7″ rose E. quadricolor anemone, cloned from a friend’s tank. 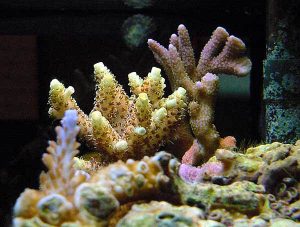 Usually twice a day a pinch of flake food. Once in a while I’ll bring in a small chunk of frozen food if I remember from home.

Water changes of 1 gallon are performed weekly, along with a fresh 1/4 cup of carbon. I either make up a new batch of saltwater, or ‘cheat’ and pull it out of my larger home tank during one of its water changes. I like to blow off all of the rock (using a baby nasal sucker instead of a turkey baster), then siphon out the detritus/algae from the top of the sand. The glass is cleaned with a Hagen mini-magnet every day or two, and razor-bladed monthly as necessary.

Never measured anything else… I count on the ~50% per month water changes to maintain all parameters (heck, it’s only 4 gals/month!)

A key benefit to this simple set up is that it runs virtually silently, due to its lack of equipment.

To reduce equipment clutter in the tank, I am experimenting with a heat panel on the back glass. Basically, it is a thin industrial 75 watt heating element that I had laying around. A thermal adhesive backing attaches it to the glass, then a thin piece of styrofoam was taped over top to insulate it from the room. A temperature controller cycles as needed to maintain the temperature.

Total cost of the system (not including the heater) was only about $200, including rock.

None really, but the stability of temperature, evaporation, and even foreign chemicals on our hands all have greater impacts on such a small volume of water, so they all require special attention.

A green mat algae sometimes grows on areas of rock and sand which I siphon during a water change. This unwanted algae growth may result from using the higher nutrient water from my home tank and the lack of a skimmer. I’m sure the main staple of flake food doesn’t help either…

The author can be reached at playfair@localnet.com should you wish to discuss his tank.