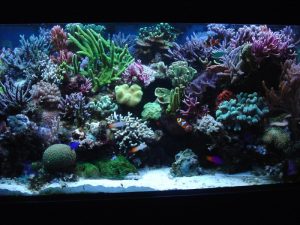 In early 2003 it occurred to me that my old 80 gallon (330l) freshwater tank might also do for a reef tank. When I studied the various ways and approaches of reefing, I got biased towards reducing technology in favour of an utmost “natural management” of nature.

Thus I decided not to use a skimmer and also do without any kind of conventional (mechanical) filtration. Since there were no drillings in the groundplate I also dropped a sump below the tank. Into the right corner at the backside I glued in an overflow consisting of a separate compartment from where the water is immediately transmitted back into the tank.

Among the different natural filtration systems the “Jaubert System” pleased me because of its simplicity and its advantages with respect to micro life. In July 2003 I covered one third of the ground at the backside with a 5 inch high Jaubert ground which consists of a 1 inch plenum constructed of eggcrate and covered with a common fibreglass window screen. A four-inch sandbed (grain size 3-4mm) was placed on this construction. A bent acrylic strip served as a barrier to the foreground. I used silicon glue to secure this barrier. 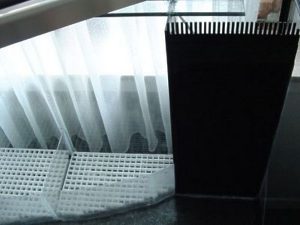 For the lighting I confined myself to 4×54 Watt ATI T5 bulbs with good parabolic reflectors, and this turned out – contrary to common opinion- to be enough light for good SPS growth.

In the spring of 2004 the rich life and excellent coral growth motivated me to make some improvements:

From the beginning there was a very low concentration of nutrients (NO3=0mg/l; PO4= 0-0,024mg/l measured with Merck) due to the combined efficiency of the Jaubert System, the fair amount of corals, and the regular harvesting of (blue appearing) brown algae (Dictyota sp.). As it seems to me, to the low concentration of nutrients is an important ingredient for the rich variety of coral colours in the tank. 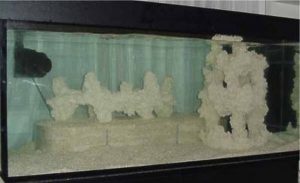 Hopefully this has provided you a short insight on how my tank functions. 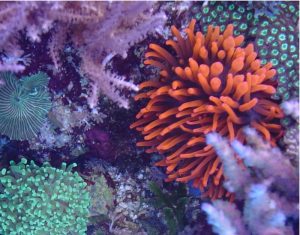 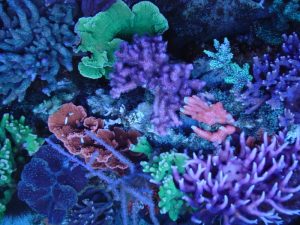