Feature Aquarium: The Aquarium Of Gianluca Bin – ‘Reefkeeping In Italy’

I live in Verona, the famous city where Shakespeare set his play “Romeo and Juliet,” and I am now running my fourth marine tank, more precisely a stunning 300 gallon reef system. 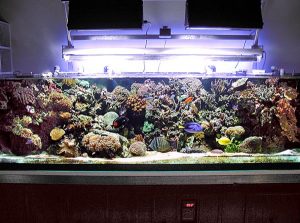 Editor’s Note: There are more photos in this article’s photo album. Click here to see them.

I got started in this hobby by chance, about seven years ago with a 47 gallon tank lit by three fluorescent tubes, only because I knew an aquarium shopkeeper told me it was easy to do!

After less than an year, when I understood that the guy didn’t have a clue about what he was talking about, I left him with his ignorance and started “travelling” from shop to shop, reading books and visiting related USA web sites that at the time started to flourish.

During these years, I learned that for a country that is surrounded by the sea for three quarters of its perimeter, Italy’s number of marine aquarists is very, very low, and naturally concentrated in the biggest and more advanced cities, like Rome and Milan.

Luckily, the average quality level of the shops in the other regions is getting better with the years, but I have sadly to admit that millions of poor animals have been literally terminated in recent years and some still are, by the ignorance of too many people that TRY to open an aquarium shop and use these creatures just like any other product they may have on their shelves!

Another problem regarding this beautiful hobby in my country is the poor quality of reef keeping literature: It’s almost impossible to find a good book in Italian that deserves to be so called!

Because of the fact that very few people speak fluent English or German, the majority of the Italian reefers, set up tanks without almost any knowledge of what they are doing, putting themselves in the hands of only one shopkeeper, that if you are lucky will tell you that you can keep shrimp with a Lion fish or an Eel. I have met very few shopkeepers with a real passion for this hobby, and a true knowledge of the subject!

During the last three or four years, we have seen the distribution of products made by German and American companies through the whole country that, thank God, have brought some light (HQI J), to the neon era that was rooted in this country. Now, skimmers, HQI lighting, Jaubert and Berlin systems, are part of the life of modern Italian Reefers. Aqua Medic ,Deltec, Elos, Aquarium Systems, Kent Marine, Dennerle, tunze and other famous brand are now on the shelves of the best aquarium shops, and lucky me, I have one only 500 meters from my home!

Despite the growth of this hobby in Italy, the price of live stock, food and supplies are rising year by year, affecting the buying capacity of Italian reefers that do not have Manhattan wages.

And so on… Reef keeping in the US is much easier and cheaper!

To finish my introduction I would like to say that I always believe that “things” have to be made with passion and love; otherwise, it’s better to not do them. I underline this concept especially if we are talking about living creatures, such as corals, fish and all the animals that mankind uses as company. Too many people keep animals for their amusement without considering the importance of giving them a healthy life in captivity, with plenty of space to move, the right company, the right food, and so on…. Nevertheless, a positive sign that things are changing can be seen by surfing new related web sites on the subject in the Italian language:

I am now running my fourth marine system, this time 300 gallons ( more than 1100 litres), that is build as follow:

My tank that is running since August 2001, utilizes a hybrid Berlin method, because of the macroalgae refugium and the thick sand layer.

I learned to avoid the use of bioballs, ceramic cylinders, sponges, wool and all the other old filtration systems that in my opinion are big producers of organic nutrients.

I stated out this project buying a custom made tank by the best company we have in Italy, the Ferrari of the aquariums,” ELOS,” that gave me a full 10 year warranty. (One flooding was enough!).

As for equipment, I prefer Aqua Medic because they are competitive in price, with extremely high quality and durability.

For somebody that always had soft corals, my dream was a stony coral and clam tank. The project started taking shape, with small cuttings, taken from old broken down tanks of myself and other guys.

I believe that certain animals have to stay in the sea, either because of their adult size, or their behaviour or aggressiveness. I think all adult fish should be forbidden in the trade, along with ahermatypic corals. These in the best of circumstances last but a few months in captivity. We can add to this list Goniopora Stokesi and its family. I don’t want to make this a Green Peace proclamation, but just people to recognize how important this hobby is in helping all the people (and their friend and relatives) that get involved in this “magic world” to understand the fragility of the reef’s ecosystems, fragility that should be treated with better respect by all of us. For this reason, I set up my 300 gallon marine system, with live rocks, corals, and fish taken in the most part from old tanks and from cuttings. This minimized taking creatures from the wild. My dream is to see that all hard and soft corals, fish, and clams come from aqua farming. Unfortunately, it is still cheaper to buy wild specimens from the poor collectors from poor countries. 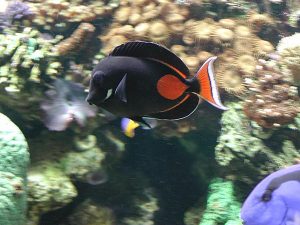 I try to have as much biodiversity as possible. This makes it necessary to have small specimens then to have a few large corals with large fish. Coral reefs are made with such a harmony of colours, shapes, and variety of creatures, all with their little but indispensable role, that I find it insane to destroy this balance just because somebody doesn’t like, for example, a sea cucumber because it looks like a turd, as a guy told me yesterday. Our mini reefs have to be as natural as possible, because this is the only way to get closer to the perfection of nature.

In the beginning I followed the Berlin method as it was originally conceived, so I installed powerful lighting, powerful water pumps, and filled the tank with porous calcareous rock and plenty of live rock. I put a thin layer of coralline sand on the bottom, only in front of the rocks and used half of “old” water taken from a shop’s reef tanks. The use of plenty of live water cycled the system quickly. 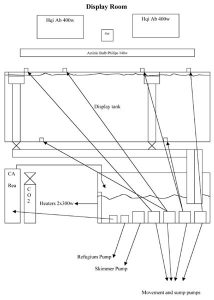 Display tank with two overflows, six pump outlets, and two pumps circulating water on the bottom. The sump has all the pumps and calcium reactor.

As I said, my dream and my goal were to create an SPS community, so after only 30 days, with water parameters and bio values stabilized, I inserted a very small fragment of Acropora sp. , that was about the size of a little finger nail. That fragment is now, after 11 months, a small Acropora, 2-cm wide and 4-cm tall with three/four branches. I know it’s slow starting with cuttings, but it’s much more satisfying not to take animals from the wild. Furthermore, fragments tend to do better than large wild colonies.

I set up the display tank in my loft like room, with the sump holding all the pumps and a calcium reactor. In the next room that’s part of the garage, I put the skimmer, evaporation replacement tank and, after few months from the start-up, I added a macro algae refugium tank. The refugium is supplied with water by a small pump inside the sump, and the water that overflows from it, falls back in the sump via gravity. In my refugium I have four different kinds of Caulerpa, and five beautiful crabs that nobody wanted in their tanks.

The Construction Scheme Of My 300 Gallon Reef System

After one year from it’s set up, I added 8cm of small grain coral sand, suggested recently by the most advanced aquarists on the planet. I am still waiting on its maturation to report benefits to the system, but I’m confident it will work. 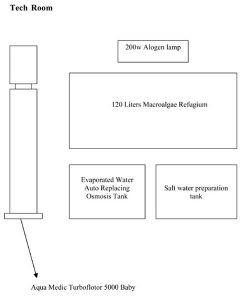 The system is made to work as much as possible as it is in nature (I still have a long way to go), so I set up the lighting to work as follow:

Water movement is produced by four 3500 liter per hour pumps that work on alternate phases. 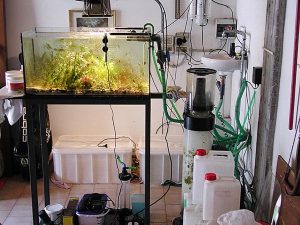 The protein skimming is done by a huge Aqua Medic Turboflotor 5000 baby, that I have to say is the best skimmer I ever had.

Calcium is provided by the Aqua Medic 15 liter calcium reactor, controlled by a Ph computer with an electronic probe in the sump and an electro valve that opens and closes the CO2 effluent. Ounce a week I replace evaporated water with 10 liters of kalkwasser, made with deionised water, from my reverse osmosis system.

All my pumps are Aqua Medic Ocean Runners, model 3500.

One of the six I have works twenty-four hours, to replace the water that overflows in the sump. Two of them make the skimmer works. The other three, work alternately, with ten minutes of pause every thirty minutes of running, naturally, alternating the pauses to have almost two pumps always active. The last three pumps are off at night, starting from 1 AM, when the first one stops, then the second and finally the third. They start running again progressively in the early morning.

After having used fluorescent tubes of all kinds, HQIs-150w,HQI-250w, I am now using two 400w, made by Aqua Medic ABAqualine.

I use no mechanical filtration of any kind. I use activated carbon every 2 to 3 months. Biological filtration is handled by the sand bed and live rock.

Essential elements, Tech I, Coral Accelerator, Coral Vite, Iron, Strontium&Molibdenum, Phytoplex, Chromaplex, and one drop of Lugol’s Solution every morning when lights are off. 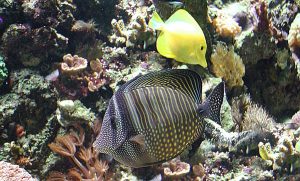 Originally, I prepared frozen food from a recipe of Eric Borneman, but I noticed it boosted my PO4 and NO3 a lot.

I prefer using Elos SVC dried plankton and Sera Micron and Cyclops, mixed together in a cup and poured in a high flow area, three or four times a week night time.

I feed every day, only once a day because of my Paracathurus Hepatus (5 years in aquariums and now 20cm long), who, at every feeding time, sweeps water out of the tank with his tail with excitement!!! The bastard. I feed mixed food twice a week, and the other days with four kind of flakes and small pellets by Ocean Nutrition and OSI, and Nori sea weeds by Dennerle or Ocean Nutrition.

After my Tridacna crocea clams spawning, they all died of some bacterial disease.

Cost Of The Project