My 6 year old reef aquarium is a 120 gallon (48x24x24″). The all-glass tank was built by LeeMar of Southern California, and incorporates a lot of desirable features I was looking for: “Euro style” top bracing, black silicon joints, beveled corners, and reef-ready rear/center overflow partition. The tank sits atop a pine stand built by a local craftsman. If I had the tank to do over again, I would’ve coated the interior of the stand with sealant for added peace of mind. 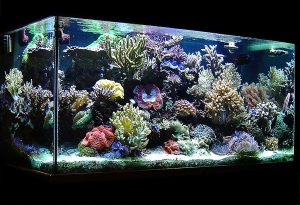 The tank was conceived around the idea of a highly diversified invertebrate community. Community was originally to resemble a Pacific back-reef biotope, although some deviations from the original mission have occurred throughout the years. I also grew fond of exotic fish, and the acquisition of fish also migrated to the top of my agenda; however, fish must be invertebrate friendly. From its inception (before the acronym DSB was coined), I used a 3-4″ sand bed, assisted by a protein skimmer and minimal micro and macroalgae scrubbing. There 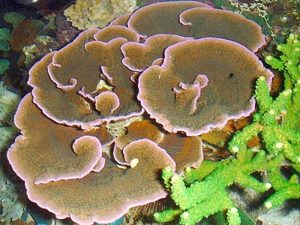 is no one preferred methodology; rather, the tank is a combination of methodologies that have worked for me through my 15 years of reefkeeping.

I employ two main circulation pumps to provide water movement: an Iwaki MD30LRXT and an Iwaki MD30RLT. A 1″ Sea Swirl is used to provide turbulence. A tunze 2002 air-cooled powerhead is also utilized for additional circulation. I emphasize pump redundancy in case of failure. Never put all your eggs in one basket. 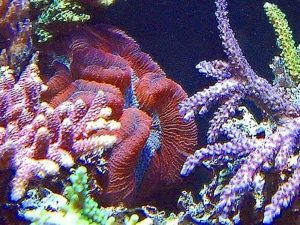 A Euro Reef CS6-2 serves my primary filtration system. TLF Hydrocarbon is used passively two weeks per month (although I’ve been known to be lax about replacing it). Microalgae are sporadically harvested from the overflow, and macroalgae from the display. Polyfilters are used after spawning events.

Because of the density of hermatypic organisms, I employ multiple calcium/additive devices: A Geo dual chamber calcium reactor (with aragonite media), a Ecotech Marine kalkreactor (fed fresh R/O via a Litermeter dosing pump), and manual additions of ESV B-ionic. No other chemical additives are used.

I feed a variety of foods. Fish are fed 2-3 cubes of frozen Ocean Nutrition Prime Reef soaked in Selcon, dispensed 1-2 times daily. I target feed my Coco Worms a mixture of DT live phytoplankton and Liquidlife’s cyropaste Bioplankton. I plan on trying Golden Pearls as additional nutrition for the worms. All other inhabitants feed on whatever is not consumed from these target feedings.

I admittedly perform very little water changes. In the past year (2001), I did two small 20 gallon water changes. I recommend water changes, so please do not follow my lead. The maturity of the tank may partially offset my leniency in water change schedule. Other then that, I do very little by way of maintenance, which consists of cleaning the glass, replacing media, and changing perishable equipment.

There are too many invertebrate species to list. Rough estimation of introduced decorative animals include ~40 SPS colonies, a dozen soft corals, a dozen LPS corals, numerous mushrooms and polyps, and 8 “ultra” Tridacna clams. Several corals are well over a decade old under my care.

How/Where did I acquire my species

To be honest, I can’t recall where I got most of specimens. 80% of my SPS (small polyp scleractinian) were grown from captive grown fragments. The rest of my specimens were assembled from at least a dozen different sources. Wild colonies and fish were purchased through various mail order outfits as well as local fish stores and wholesalers.

My NO3 levels were 5-10 ppm last time I checked. My PO4 was undetectable with a Salifert Test Kit. It’s admittedly been a long time since I last tested my tank—probably around a year. I approach tank care nowadays in a very “biological” perspective; That is, I judge how my tank is doing by observing my organisms. Not recommended for new tanks, mind you. But mine is 6 years old 🙂 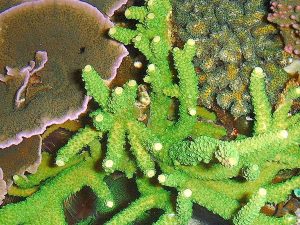 Anything else notable about my tank

The most notable tidbit about my tank is that my invertebrates regularly spawn. Spawning occurs sporadically all months of the years, with one major mass spawning event around September. Spawning occurs with more than half my Cnidarians, including my anemone. Oddly enough, my clams have never spawned.

Also, for a skimmed tank – one without a refugium and several predatory fish – I have a surprising dense and diverse population of plankton. Sponge and tunicates plaster all the cryptic passageways, and feather dusters, copepods, amphipods, polychates, and nematodes liter the substrate.

More information and pictures can be found at: http://www.reefscapes.net

Do You Know Where Your Corals Are Coming From? Ecological Information for Aquarists from Coral Collection Areas in Indonesia

Chemistry and the Aquarium: Specific Gravity: Oh How Complicated!