I have always loved aquariums and fishes. As a youngster I bred and raised various fresh water fishes. I have kept fish-only marine aquariums since 1980. By 1988, I had an aquarium with a reverse flow under grave filter, Lava rocks and Caulerpa algae. It was a moderately successful aquarium with very healthy fish and a gravel bed full of bristle worms. Other time commitments caused me to move on. 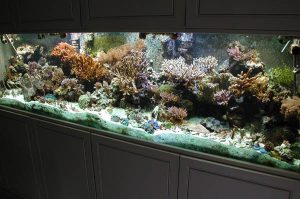 This aquarium was broken down and given away. I did not get back to aquariums until 1997. Thanks to the Internet, I was able to acquire a great amount of information in a short time, which allowed me to jump back into this hobby with a 100-gallon reef aquarium as a learning tank. Two reef keepers influenced me the most, Eric Borneman and Ron Shimek. Both were active participants on the Reefkeeper’s mailing list in the later half of the 1990’s.

I have always found that the natural reefkeeping method is best. I don’t rely on equipment excessively to control the tank; rather, I try to manage the tank as a whole using the inhabitants as much as possible to help in stabilizing the condition of the tank. I use redundancy to make the tank failsafe. I also take advantage of automation to keep the workload on keeping a large tank manageable. I like to use a deep sand bed with diverse fauna, and live rock as a biological filter. I feel that there are many substances that are toxic for the animals in our tanks. These substance need to be removed with water change and various other export mechanisms in order for the tank to do well. 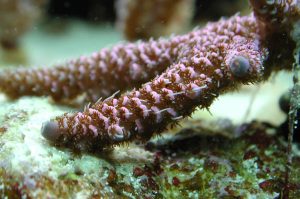 The tank was custom built by Oceanic. It is 8 feet long and has a volume of about 400 gallons. It sits on a home built stand. It is totally enclosed by cabinetry to hide the support equipment. I added a window air conditioner to the room to keep the temperature reasonable for the animals. I ordered the tank January 2000, as a Christmas gift from my wife. Water was added in June of 2000. 2400 pounds of Southdown sand along with 200 pounds of Fiji live rock provided the base for my reef. Three dedicated circuits supply the electricity. Two Aqua Sea 4700 pumps provided circulation. Water movement is varied using an automatic three way valve and 4 additional Hagen Power heads. A partitioned and drilled 125 gallon tank was used as the sump/refugium.

This tank is lighted by six 400 watt MH. Two of these lights are 20,000 K radium with a photoperiod of 13 hours per day. The other four lights are 6500 K having staggered light periods of 6 hrs each. The sump is lighted by two 250 watts 6500 K MH. These light are on 8 hours per day when the display tank’s lights are off. The equipment and the lights keep the temperature of the tank on the high side. The maximum temperature of the tank last summer averaged 86 degree F, with an occasional peak at 89 degrees F.

There is no mechanical filtration for this tank. Biological filtration is provided by the live rock and the 10 plus inch deep sand bed seeded with sand from various tanks of fellow reefkeepers and fauna kits from Inland Aquatics and Indo-Pacific Sea Farms, and a large amount of sand from the Corpus Christi Bay. The sump is also partitioned to form a large refugium with a deep sand bed full of macro algae and various salt-water flora. At least one gallon full of various plant materials is removed every two weeks from the refugium as a means of nutrient export. A large amount of Xenia is also removed and discarded. Initially, a Red Sea XL skimmer was used but this skimmer was removed 6 months after set-up. 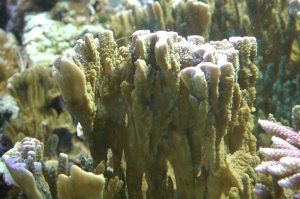 All top off water is added through a homemade calcium-reactor using a Kent float valve. I also use a homemade Calcium reactor built by James Wiseman. There are no other additions to the tank other than a variety of foods enriched with Selcon.

Where/how you obtained your corals and fish

Almost all the corals in this tank are tank raised – obtained by trading with various Texas reefkeepers. A few were farmed raised. This tank contains 90+corals, with only a handful of the corals collected in the wild. A friend in Canada who is a coral importer there sent all of these. Most of the fish were obtained locally and in Houston. My Banggai cardinals and anemonefish are tank raised, while the rest of my fish are wild caught. The oldest fish in my tank is my beautiful Marine Betta, which has been with me since 1997. The oldest clam is my T. gigas, another Christmas gift from my wife. We got this clam from Saltwater City in Bellevue, Washington December 26th, 1998. It was 1.5 inches wide at the time. Today this clam’s shell is 17 inches long. Both of the above animals survived a cross-country move from Seattle to Corpus Christi.` Unfortunately, all my corals and most of my fish did not survive the move. My current oldest coral is a tabletop Acropora sp. that is about 2 feet in diameter. This coral started out as a .5 inch fragment given to me by James Wiseman in January 2000. There are 30 fishes in this tank, including a Majestic angel, a Coral Beauty, a pair of Cherub angels, a Purple tang, a Yellow tang, a Mimic tang, two Marine Bettas and a variety of colorful small fishes. There are 16 clams and about 90+ corals at this time.

To keep this tank in optimal water condition, I change 90 gallons of water every 2 months. I also keep the Calcium reactor and kalk reactor in good working order. I harvest algae regularly and feed the tank about one teaspoon of various dry foods in the morning, .5 cubic inches of frozen food mixed with .5 cc of Selcon every afternoon and an equivalent of one sheet of nori every AM. At night I added 2 cc of a mixture of Golden Pearls of all sizes.

This aquarium is very special to me. My family enjoys it very much. I think I am successful in maintaining this aquarium. My corals and clams are growing very fast and appear very healthy. I have always tried to keep breeding pairs of fish in my aquarium. So far, several species of fish have spawned in my aquarium: Yellow tail damsels, Fire fish, Royal Gramma, Mandarin, and Banggai Cardinals. I hope my A. Ocellaris and Pink Skunk clowns will spawn in another year or so when they mature. My favorite fish is the Majestic Angel while my favorite invertebrate is my graceful T. gigas. I have not had the time to attempt to raise these fishes yet. I think the future of our hobby will have to rely on tank raised corals and fishes. I hope to contribute to this future by raising these fish and continue propagating corals in the future.

Please feel free to email me at minhnguyen@pol.net for any questions or comments regarding this tank.