Feature Aquarium: The Aquarium of ‘Suzy’

Editor’s Note: There are additional photos of this tank in the article’s photo album. 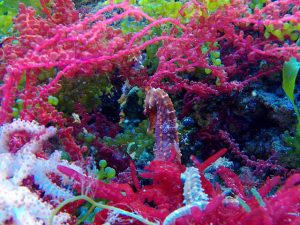 As a dedicated fish nerd for over 2 decades, I am so thrilled to be able to show off one of my tanks on Reefs.org! I have had many different specialty tanks in my lifetime, but this one has been my favorite thus far. My last tank was a large 180 gallon, with a large heavy canopy. I had it for years while my innermost fish geek planned the next one in the back of my mind. Being a 5 foot tall female, I found working in a large tank cumbersome. It really was a drag if a bulb needed changing, so I put it off. I keep thinking how nice it would be to have room behind the tanks to tinker and fuss and test and grow live food.

This is what I came up with: A wall of tanks all plumbed together. I can have the aggressive fish, the docile fish, the corals with their chemical warfare and pretty much anything. I could also have a large sump to be able to house a large enough skimmer for all…. 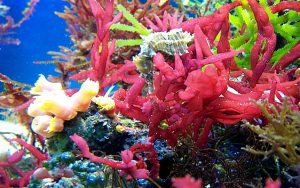 I did not know then that the sump would end up being the best part! I started collecting and experimenting with macro algae. This was in the late 90’s. I had always loved seahorses but because of their endangered status, I did not feel buying them was ethical. That changed in May 2005, when the cities regulations made them difficult to import. I started a seahorse tank then and I have been collecting macroalgae for aquascaping their tank ever since.

At this time, this tank is dedicated to seahorses. It is lit with 2 normal output bulbs that I got from a commercial lighting store for under $10, housed in an old shop light fixture. The water motion is provided by a drain from the upper tank, that drains into an DIY spray bar. It has a few inches of aragonite substrate. It shares 2 300 watt heaters with the rest of the tanks. I have not used the skimmer for over a year. It is a typical refugium, expect the fish do not let anything that moves live for long…

Maintenance for this tank does involve a bit of trimming. I like that part because I can make a major change in just a moments time, where as in my reef tank, a change takes months. SPS grow so slowly and die so quickly! I do have to add calcium and bicarb, for the SPS and coraline algae. This tank consumes a lot of Iron, so I do need to test and add FE+ occasionally along with a rare dose of magnesium, I do not do typical water changes. I add a lot of home grown phytoplankton so I need to add fresh water frequently to keep the salinity at 35 ppm. I do have 2 filter socks with AC at all times. 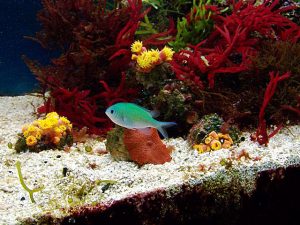 Parameters are incredibly stable in this system, I believe because of the large amount of water,( ~ 250 gallons depending on the level of the 50 gallon sump). I live in the mountains and the tanks are open to a large room, so heat has never been an issue, even with MH lighting on our reef. Temp is always 74`-76`. pH is monitored continuously and ranges 8.1.-8.2, if it goes outside those ranges, I know I need to change the battery and calibrate. I try to keep all electrolytes at natural seawater levels.

This tank processes a  lot of  nitrate and phosphate. I have found that it allows me to feed my fish as much as they need and still have low  nutrient levels. But, because I try to keep the conditions ideal for algae, I need a lot of janitors in my reef to keep the hair algae in check.  But, finding fish that don’t eat desirable algae has been a much bigger challenge!

It is a different type of tank, but for me, it is the best of both worlds. The wonder of a planted tank, with focal points that make a FW aquarist drool!