This Australia trip was undertaken as both a pleasure trip and as an opportunity to take underwater pictures on the Great Barrier Reef. In the coming decades, the strain on reefs will be growing and diversity falling. Most scientific reporting of coral mortality (for various reasons and of various sources) indicates that reefs are in a serious decline worldwide. For that reason, it is my objective to visit, photograph, and imprint on my mind’s eye just what those reefs look like today. 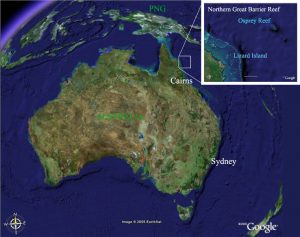 Satellite image, from Google Earth ™, showing Australia, with an inset showing the relative positions of Lizard Island and Osprey Reef.

The Sydney Aquarium, located on the waterfront in the harbor and nestled against downtown Sydney, is a nice arrangement of native Australian fish and wildlife. A tour of the facility was provided by Tom and Aaron, two marine biology and fisheries students who live in town. Their knowledge of the local fishes and the aquarium itself added a touch of depth that can frequently be missing from a stand-alone walking tour of an aquarium. For that guidance, I’d like to thank them both!

The exhibits have an abundance of displays showing the diversity of freshwater fishes, including barramundi (Lates calcarifer) and some outrageously large bass and Murray’s Cod (Macquaria and Maccullochella sp respectively) and a host of Rainbow fish (Glossolepis, Melanotaenia, Pseudomugil, Iratherina, Telmatherina, and Chilatherina sp.). All of the freshwater displays are dimly lit to keep stress low and in many cases replicate their natural environments. The freshwater exhibits look to be in great health, with an assortment of fishes from given locations, mixed together where appropriate. These displays also had small maps indicating just where in the country those animals are found. 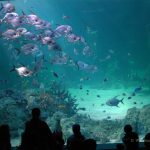 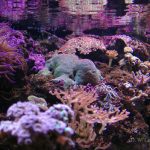 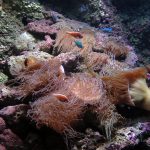 The aquarium sported a couple of very large displays. The first containing sharks and relatives and the second with a few sea lions that had plenty of native hermit crabs and snails roaming about the acrylic viewing tubes and amongst the macro algaes. Each of these had underwater viewing areas, where the thick acrylic tubes meandered along the seafloor. The sea lion display was also viewable from above water so that you could get a glimpse of them playing during certain times of the day. The elasmobranch tank had a vast array of different species, including some reef sharks, guitar fish and other cartilaginous relatives.

Images taken at the Sydney Aquarium. Examples of the northern Australian oceans reef tank, including a picture of the entire fifteen foot display. Also included is a view of the giant viewing pane of The Great Barrier Reef fish exhibit.

The saltwater selection of fish was unique compared to those found in the US or Europe, especially the smaller, cooler tanks containing species found in southeastern Australian waters. The tanks were very natural looking, with algae growing in places and absolutely stunningly colored, smaller fish. Unfortunately, for the photography minded, images would be difficult to capture with the condensation on the outside of the glass (due to the cold temperatures they maintain in the tanks and locally high humidity). Displays featuring southern ocean occupants consisted of unique variety of boxfish, seahorses, and a few types of wrasses and smaller fishes. The northern ocean displays included a fairly large, curving reef tank that is fifteen feet in length although rather sparse in coral cover. The tank was clean and had healthy fish in it, but was lacking in flow and diversity regarding corals. Many examples of hardy corals found on the reef were on display. The largest exhibit, entitled The Great Barrier Reef, focuses on fish and is around 2.6 million liters (685,000 gallons) in volume. This tank has a huge array of fishes in it, including tangs, lionfish, angels, butterflies, harlequin tusks, and much, much more. This was by far the most eye-catching of the exhibits and definitely the most impressive for me.

After a brief sojourn, I traveled north to Queensland and the reefs. 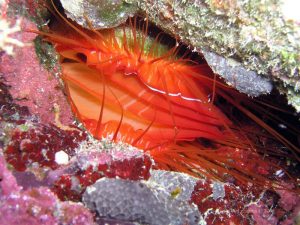 A picture, taken at 30 feet depth of an Electric Scallop on Pixie Pinnacle in the Great Barrier Reef. This bivalve uses bioluminescence (the white margins) that ripples back and forth across its surface to attract prey zooplankton.

The Great Barrier Reef, being the only biologically derived object viewable from space, is a massive environment ranging over hundreds of miles and containing hugely diverse ecosystems. This portion of the trip consisted of a mere five diving days aboard a liveaboard dive boat. We ranged from the Ribbon Reef #10 out to Osprey Reef in the Coral Sea and back to Ribbon Reef #5. These areas were north of Cairns and Port Douglas, near to Lizard Island. Osprey Reef is 200km east of the mainland in open water, its walls dropping thousands of feet to the sea floor.

The experience was wonderful, although if you aren’t a scuba diver and a reef fanatic, you might get tired of the routine. The typical day consisted of waking in the morning, diving, eating, and diving, and eating, repeated until it was dark and you crashed to sleep in the evening. That routine, however, let us glimpse life in its natural state over many miles of the reef. We hit dive sites that few other operations visit, as well as some of the most popular locations on the northern barrier reef. The sites consisted of walls, sandy bottoms, shallow pillars, isolated bommies (pillars), and even open water! 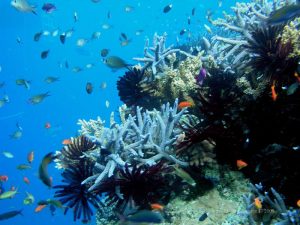 An example of the great diversity of marine life on the Great Barrier Reef. Acroporid corals are surrounded by clouds of various species of Anthias, always out and mobile, looking for food particles.

In general, sites were very clean with little evidence of anthropogenic destruction or natural degradation. A few Crown of Thorns starfish were visible, but not in dramatic numbers. Some broken corals were in evidence, but I watched a Titan Trigger do more damage to an Acropora in one five minute session than any of us as divers did to an individual coral. While in the park, the established rules were followed. Those rules basically state that you do not interact with the wildlife or substrate in any way beyond taking pictures and watching. No feeding, touching, bumping, or molesting the wildlife.

During our adventure, we encountered Dwarf Minke Whales on three of five dive days. It was an amazing experience and one I will never forget. The whales are an elusive breed, only identified to science as a separate species in the mid 1980s. They are exceedingly curious about divers and actually seem to want to interact with people. As with everything in the marine park, there are specific rules of engagement for interacting with the whales. In general, you are not allowed to do more than hang onto a rope which is floating on the surface. No flash photography, no sudden movements, no jumping into the water, and no scuba diving with the whales without a permit (you can snorkel for hours, but diving is permit only). These rules are in place to minimize possible stresses to the animals and to keep everyone involved safe. There are research groups involved with these whale studies at some of the Australian universities. They ask that you remember your interactions and attempt good descriptions of the whales and their behaviors for the purposes of identification and monitoring. Each interaction ended with a report filled out with as many details as people could remember. 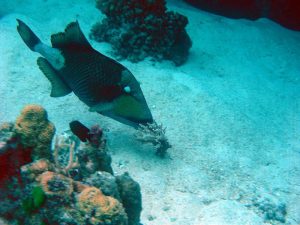 Evidence of just how close these curious residents would come to snorkelers. The Dwarf Minke Whales would circle and watch you the entire time you were in the water, frequently coming close enough to be within reach. Notice that each whale has a different pattern of colors and scars, these are used to help identify individuals each year as they migrate along the reef.

Back in the water with the whales we had a most marvelous experience. Not just once, but each time we encountered the whales, they would become accustomed to seeing us and begin to approach. In the end, they were so close to us that we could have reached out a hand and touched them. The whales would watch you carefully as they went by in graceful, slow paths which took them in and out of sight. On the playful side, they were much like a dog that wants to know who you are without interacting with you directly. As one would slide by to the side, another would approach for a very close up view from beneath. It was quite startling to suddenly realize that a 23 foot long whale was only four feet from your knees! 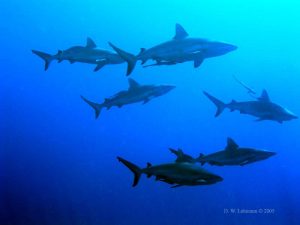 A ‘shark attraction dive’ located at Osprey Reef outside of the marine park. The dive operator used fish parts contained in milk cartons to bring the sharks in for a close-up viewing. The sharks could not access the food and so remained passive, but curious.

The Great Barrier Reef lives up to its name in memories. The entire experience is great and all the more so for interactions with the native fauna. Seeing natural environments in all their glory provides new incentive to create systems in our homes that more closely mimic the native environment from which we harvest these animals. My hope is that as our hobby expands, we actually learn what is necessary to provide for these animals and come up with the means of getting the conditions to be such that our home tanks serve as a possible source for renewing our oceans. Human impacts on reefs are quite severe. The reefs might survive this newest onslaught of heat, disease, nutrients, and such, but the diversity of the reef will fall. Perhaps, in some future time, our captive systems will serve to provide the information we need to slow or halt the decline of these beautiful environments. 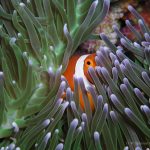 Percula (Amphiprion percula) and Pink Skunk Clowns (Amphiprion perideraion) in their native environments. The Percula clowns were actually the rarest of the clown species we identified on the reef. The most common was the Barrier Reef Clown (Amphiprion akindynos). 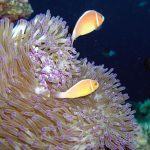 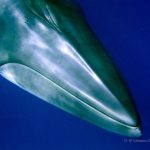 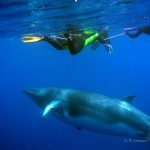 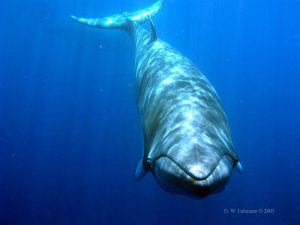 This whale approached me as I freedove a couple of feet beneath the surface for a head-on view. Not only did it turn directly towards me, bu it also emitted a sound that I could not hear, but I felt in my lungs! Apparently, they want to know as much about us as we want to know about them. 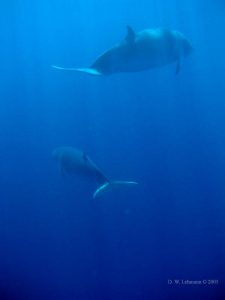