(Text and Tank by Doug Lehman, Photographs by Tom Sandercock and Mike Kirda)

Editors Note: Click over to this article’s photo album to see additional photos of the tank.

I am honored that the Reefs.org and Advanced Aquarist staffs have chosen my tank as the “Featured Tank Of The Month”. 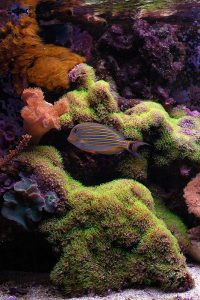 Figure 2: Scenes from the tank. Green star polyps have been growing since 1999 and dominate one end of the tank. 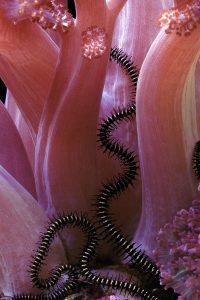 Figure 3: Colt coral with the legs of a 5 inch brittle star looking for food.

I have been keeping saltwater aquariums since 1977. When I started, undergravel filters were standard equipment and Steven Spotte’s first edition Fish and Invertebrate Culture Water Management in Closed Systems was the prime reference book. I have had much success and a few failures over the years. Fortunately, my reef keeping techniques and success rates have progressed along with the rest of the hobby. The one constant is that the number of my aquariums, and their size, has increased steadily over time.

In the spring of 1999 I thought the time was right to set up a larger aquarium. I must have been in the right LFS at the right time as the owner said “Hey Doug come take a look at this”. A six foot aquarium with a price I could not refuse. I bought it and spent the next few weeks building the stand and related filter components. I never looked back as I filled it with the larger corals from my other aquariums. Over the years the soft corals began to dominate the set up, and I removed the few LPS to other aquariums. It has turned out to be a joy to maintain.

The aquarium is a standard 125-gallon (72″x18″x21″: Oceanic. The stand and canopy were home built of red oak. The filtration is through a 40-gallon sump (36″x16″x16″: w/ sponge filter baffles and 100-micron pads as needed. Activated carbon is used continuously, 3-cups w/ ½ of it changed out monthly. The skimmer is a DIY 4″x24″ with a ½” venturi driven by a Mag 9. There is a DIY 4″x22″ calcium reactor that maintains a rock steady 440 ppm Ca , and 11.5 DKH. For water movement I use a Wavemaster Pro with 4 A.S.1200 power heads and a Little Giant 4 MDXQ main return pump. Since the aquarium is located in a Chicago basement the temp tops out at 83 F in the summer and is kept at 77 F during the winter using a 300 watt Ebo-Jager heater.

The current lighting consists of 640 watts of URI-VHOs. A mix of 250 watts actinic, 250 watts aqua sun and 140 watts of 50/50. The aquarium was originally set up with six 96 watt PC. The change to VHO’s has been dramatic, all corals have been trimmed many times, and the babies having been sold or traded.

There is a 20 gallon refugium (48″x12″x8″: over the aquarium that has 20 lbs SD and 20 lbs of live rock, that drains back into the main display. It has turned into a worm/pod factory. I will be adding algae w/ lights soon.

The aquarium was stocked with 3 boxes of Fiji live rock, 160 lbs of CaribSea aragonite and then left to cycle for six weeks. The first critters were the standard blue and red leg hermit crabs, astrea snails, a few shrimp, and six brittle stars to help with clean up. Soft corals and fish were slowly added after being quarantined 2 to 4 weeks.

The aquarium has morphed into a predominantly soft coral display. The only stony corals are a 6 year old Pavona cactus and Plerogyra sinuosa. These tolerate the relatively low light from the VHO system. Figures 4 to 24 show pictures of most of the corals. In addition to those I have Cladiella, Anthelia, Pachyclavularia, and Capnella in the tank. 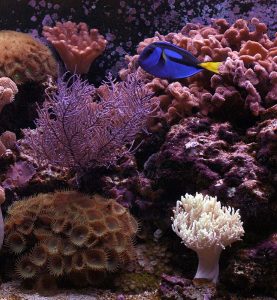 Figure 4: Scene from tank center. Top right shows a large Pavona not shown in the other figures. 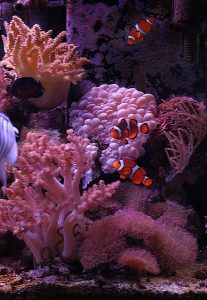 Figure 5: The end of the tank where the clown fish make their home. 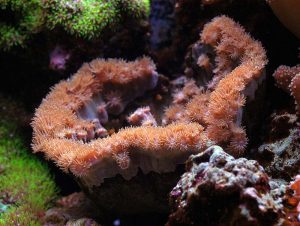 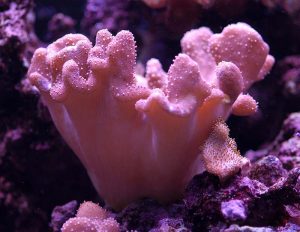 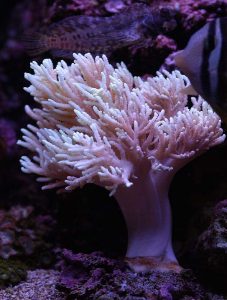 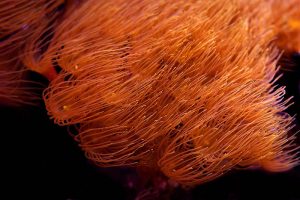 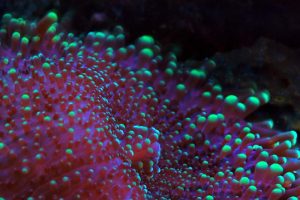 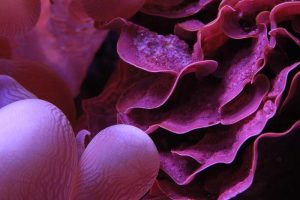 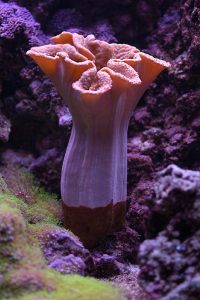 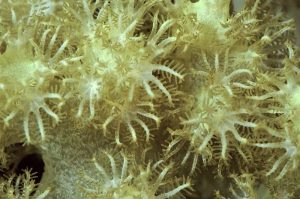 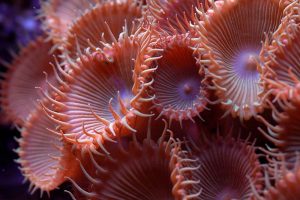 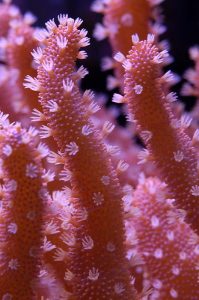 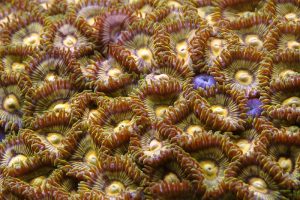 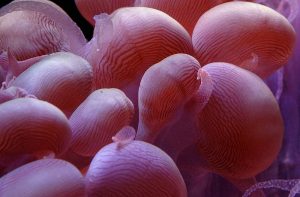 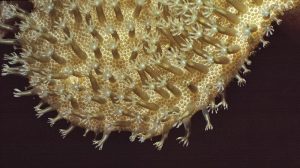 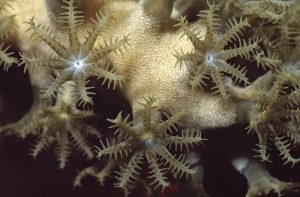 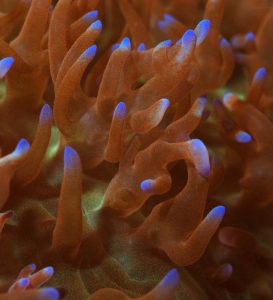 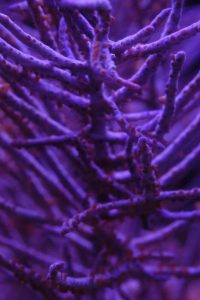 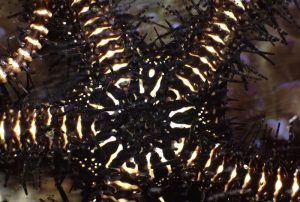 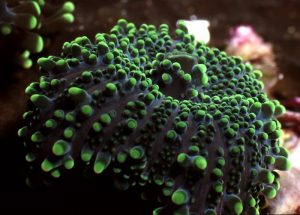 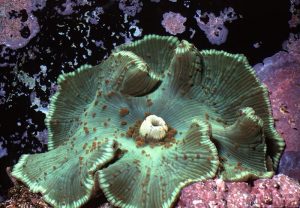 I also keep a fairly large number of fish in the tank. The current fish population stands at eleven. I am fond of tangs because they keep the algae down. Figs. 25 to 31 show most of the fish in the tank. Fig. 3 above shows the three Amphiprion ocellaris in their chosen home. Not shown is a Centropyge bispinosus who was too shy to have his picture taken. The Lamark angel, Fig. 31, is one of my favorites. I have had him for 4 years and his coloring is now changing to his adult markings. 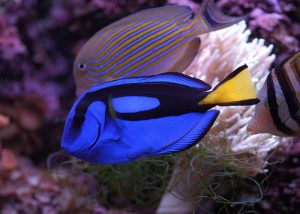 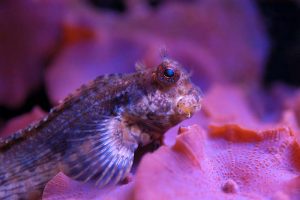 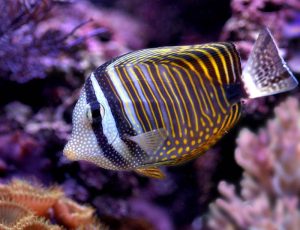 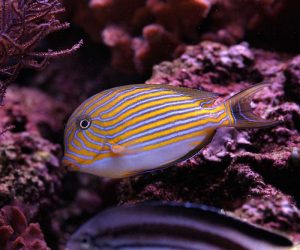 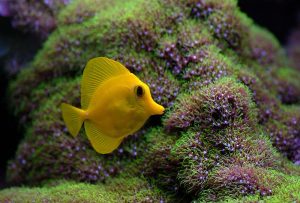 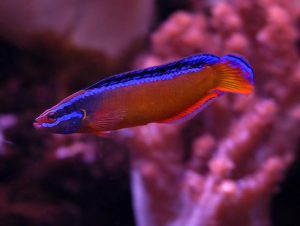 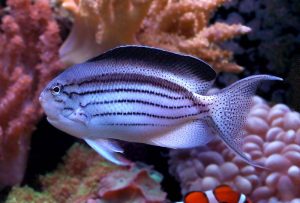 Having started in this great hobby with a 55 gallon tank, I have found this larger aquarium a joy to maintain. Twenty gallons are swapped out with fresh IO at 14-day intervals. The entire reef is power washed 3 times a year w/ a small pump while running a diatom filter (old habits are hard to change). After the ensuing dust storm/water change the corals expand greatly. Which tells me, I could use more water movement? Outside of monitoring the water quality, the only real chore is cleaning the front glass and keeping the RO top-off-tank full. I use an 8 gallon tank with Kent float that maintains the S.G. at 1.026. The VHO lamps are changed out when the PAR drops by 25%, usually at 10 to 12 month intervals.

I feed the fish flake and pellet foods in the morning. I use frozen and live foods in the evening. For a late night snack I give them Cyclopeez and brine shrimp. I do not target feed the corals as I think they get plenty with what the fish miss.

I would like to thank the reefs.org staff for allowing me to share my aquarium with you, and a special thanks to Menard , Jeff and Dorthy for answering all those questions. If you have any questions about my aquarium, I can be reached at fishnut0159@comcast.net.