When I was asked if I would submit my tank for reef of the month I at first resisted, thinking “Why in the world would folks care to see my tank?” In my opinion it’s very much a “dirty” tank. It’s not pristine or SPS exclusively or even remotely like many of the tanks on display in Reefs.org.

My tank is really a “hodge podge” of ideas, corals and fish. I had no biome in mind when I started to stock the tank. At first, I thought I would go with the fruit stand approach, which is to say that I wanted every color of coral I could get. Then I decided I would go the SPS route and add fragments and colonies of any SPS I could afford or find. I decided then that I needed some soft corals to fill in the gaps and to add some texture to the tank. Finally, I just decided to just go with what felt right to me- not exactly scientific but I think that’s really they way most reefers go when they stock their tanks.

My methodology of keeping the tank clean came about from wanting to take a minimalist approach to “gear” and is decidedly low tech. Just about every reef keeper I talk to wants to know the “gear” I use to keep my tank successful as if the key to success is somehow in my hardware. The key is in my hands-off approach and simple observation of the tank. I also wanted to hide the gear or at least make it as unobtrusive as possible to the house and the occupants of the tank. In this last respect I feel I have succeeded.

The main tank is 4 ½ years old and is a 155 AGA glass bow front. It connects to a 165 gallon sump via four drains and the main circulation is a 1.5” line split three ways to provide an estimated 1600 to 2000 gallons per hour of flow. I could do a great deal more (I could get over 3000gph) but the noise generated by the cascading water is at PWTL (or peak wife tolerance level). The pump used is a Sequence 4600seq22. This pump is powerful, quiet and probably one of the best investment upgrades I have made to the tank. The three way split goes to six ¾” loc-line returns. I had to Dremel out the AGA overflow notches to allow them to support the increased flow. 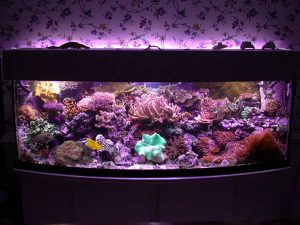 The tank was filled initially with 100lbs of sand to a depth of about 1-2”. To that I added ~300lbs of uncured Savaii island rock. This was the island of the month. It has turned out to be very good rock. The sump at the start was a 30gl long glass sump drilled with a ¾” bulkhead. I even started out with a wet/dry DLS as the primary filter. That filter worked just fine for two years but then I grew tired of having to remove and clean the DLS pads every 3-6 months and the mess that created. I then removed them and replaced with a crushed coral bed installed over a deep sand bed that occupied two thirds of the sump. That too had to be cleaned and I soon just removed the crushed coral and finally the whole wet/dry came out and I just fed the water into the sump over the sand bed. The circulation was provided by a Quiet One external pump. I was getting maybe 500-700gph.

Then I decided it was time to do a major upgrade of the sump and generally improve the water conditions of the tank. Though the corals and fish were doing fine I felt that they were living in a sewer as the nitrates were approaching and staying at 80-100ppm regardless of what I did or how many large water changes I performed.

I decided to add a 165 gallon sump under the house and the Sequence pump. In the sump I added a 4-6” DSB in hopes that this would bring the nitrates down to the more manageable level of 20-40ppm. That’s where they stand today. I also was able to pick up an inexpensive used 250W metal halide ballast and pendent and added that to reverse light the sump. A few macro algae’s were seeded and will be removed monthly to weekly as nutrient export. So now the sump is more like a giant refugium. In this setup the tank has been running since early January 2003.

The skimmer I still use is the Aqua-Medic Turbofloater 1000 in sump model that I bought used initially for the tank. I have no reactors or culture generators; just the skimmer, sand and now the algae. The skimmer now works better as it doesn’t sit as deep in the water. At some point it may be upgraded to an Aqua-Medic Baby 5000. 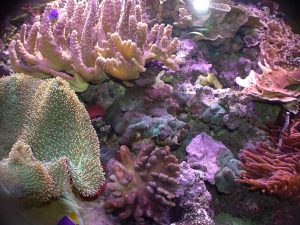 If you plan on using 1.5” flex PVC, get a friend to help and use the natural bends to your advantage. I had to use all my might and some steam to get the U bend in to make the final connection (See Photos). I also didn’t have the luxury of being able to leak test, but most leaks can be avoided though good plumbing techniques and patience. The whole sump conversion took me a while to plan out and I did it in stages so as not to wear out my body or my patience.

From late November through early February the tank gets direct sunlight via a large bay window next to it. That’s the best time of year to really watch as things grow rapidly. The whole tank gets exposed for about 3-4 hours as the sun moves across the horizon.

The main circulation is the Sequence 4600SEQ22 1/6HP pump as described above. This is the primary water flow for the tank. It’s located under the house and there is 12’ of straight up travel for the water to move before it even hits the three way and the 6 returns. There are two CAP-800 power heads on a Red Sea Wavemaster Pro wave maker that I use to create more variability in the water movement in the tank and to control the range of the two giant rose bubble tip anemones ( E. quadricolor ).

I also have a 1/4HP Aqua-Logic drop in chiller that runs in the summer to keep the tank cool. The temperature ranges from a low of 75 in the winter to a high of 79 in summer. I now have to make use of two 300W heaters in the winter with the new sump setup. 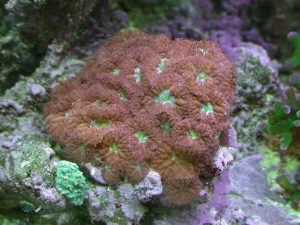 I check nitrates every two weeks or whenever I feel like it. I test calcium and alkalinity on the same haphazard schedule. I do check a Pinpoint PH meter daily as well as the temperature. The new sump has me checking these things more than normal since I am dealing now with an external sump and 110 more gallons of actual water volume. I am again learning how the tank responds to temperature and other changes.

Typical calcium readings range from 380ppm to 480ppm. Alkalinity is between 8-12dKH. pH ranges from 8.35 to 8.55 over any 24hr period; if it creeps higher or lower I check alkalinity and calcium and dose as required. My specific gravity ranges from 1.0240 to 1.0245 and the temperature range is from 75-79F depending on the season.

I do water changes now whenever the mood strikes – this is not recommended by me unless you know your tank. When I do a water change it is large, usually 90 to 110 gallons. I change carbon every few weeks. I maintain alkalinity via baking soda and washing soda (mixed 5 to 1) added to top off water and added every few days. Calcium is dosed with Kent Turbo Calcium about once per week or several days after buffering alkalinity. I add about 5 or 6 tablespoons of the Turbo calcium per week. I never dose both on the same day.

Glass is cleaned usually when I can no longer stand the coralline on the front blocking my view or when the wife complains that she can no longer see her favorite fish or corals.

Feedings are roughly every day with varying days off. I never take the same day off from feeding. The amounts I feed are random as well. I feed my tank everything from frozen prepared foods, live phytoplankton, brine and spirulina flake, to broccoli and live macro algae now harvested from my sump. I employ the blizzard technique- that is to say it looks like a snow storm in the tank right after I feed. The whole tank then is able to garner some food; corals, polyps, fish, and invertebrates all are able to feed. 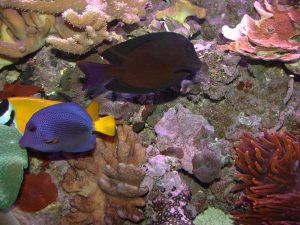 All the fish in the tank are now at least 3 years old, even the cleaner wrasse.

Some animals of note in my tank are the Lobophytum sp. or Devils hand, Green Toad stool or Sarcophyton sp., and the range of colored Monitipora. The most striking animals are the two 12” diameter rose-colored bubble tip Entacmaea quadricolor anemones. They are home to the mated and breeding pair of Maroon clownfish, Premnas biaculeatus.

Over all, the tank is stocked with some 50 or so different species and color morphs, a dozen fish and countless invertebrates. In the past two years I have had the pleasure of giving away or selling some 200+ fragments/colonies to fellow reefers including some to folks at Reefs.org.