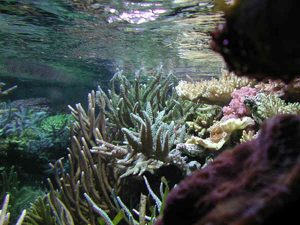 My goal was to create a model of a reef environment where reef building corals were at their peek growth and heath and reef fish could feel quite at home In a natural setting.. The refugium was added to increase the total water volume and accommodate possible food sources. 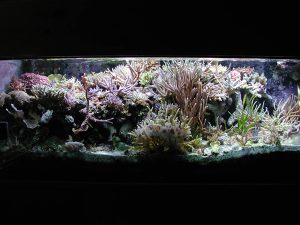 One RK2 Systems 1/8 Horse power putting out 3600 gallons per hour returns water from t he sump to the main tank to a 1″ Sea Swirl rotating device and other 1/2″ returns. It also powers the skimmer. A Hagen 802 that puts out roughly 400 gallons per hour feeds the refugium. One tunze 2002 Turbelle moves water inside that tank. (note, as corals have grown, water circulation has diminished inside the main tank dramatically. 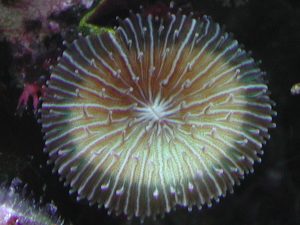 The refugium is lighted at night from 9pm to 10am (RDP). There are 4 24″ normal output fluorescents run on one home depot electronic ballast. There is mirrored acrylic above those bulbs. 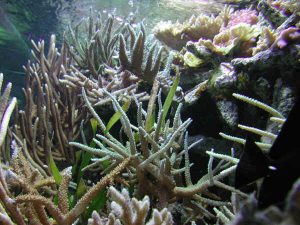 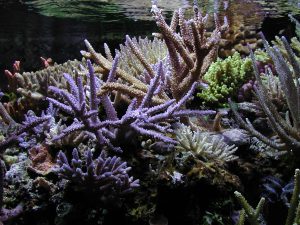 I have fed a variety of foods. Flake, pellet, home made prepared food from Sanjays recipe., algal pastes and many more. I have fed heavily during periods and lightly during others. This tank does well with one light feeding per day and one heavy feeding per week. I have found no exact requirement for this topic. Times with no feeding at all the tank looked as good or better than with heavy feeding. I feed and leave the debate for the experts. 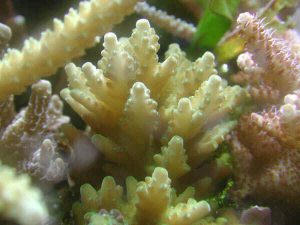 Where/How you acquired your tank’s inhabitants

Most of the full-grown corals are from fragments I bought or traded with hobbyists or stores. There are a few that were bought as Solomons disks that are now large colonies. Some corals come from other hobbyist that had them for many years growing and fragmenting them for
others.

There has been no wild coral addition in well over one year. The corals are propagated when ever possible and sold or traded to support the systems expenses and to further spread them to other hobbyists tanks.