I set up my first reef tank in 1989. It was a 90 gallon tank aquascaped and stocked in the “classic” design of reef tanks of the time. I stepped up to a 300 gallon tank several years later, again aquascaping along the lines of most reef tanks with Fiji live rock lining the back wall almost to the water’s surface. Like most reef keepers, I had never really seen a natural coral reef except in photographs. I simply emulated what other hobbyists were doing at the time. As I gained more experience in maintaining a reef tank I became curious about natural reefs. Reading scientific journals and academic books on coral reefs, I began to wonder if we were really recreating natural reefs as well as we could. Ibecame scuba certified and began traveling to the Pacific todive the coral reefs hobbyists were ostensibly emulating. I was quite surprised to find that real coral reefs don’t look anything like traditionally aquascaped reef tanks. The more I dived and observed the natural reef, the more I realized that while the hobby’s traditional approach to aquascaping was perhaps an aesthetic success (beauty is in the eye of the beholder, after all), the traditional aquascape approach created practical challenges and the potential for serious problems as the tank matured. I resolved to set aside traditional aquascaping conventions and instead model a new tank after actual Indo-Pacific reefs. My 2000 gallon tank is the result. 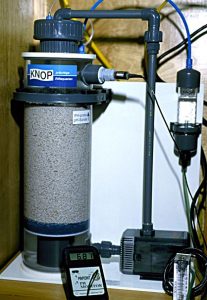 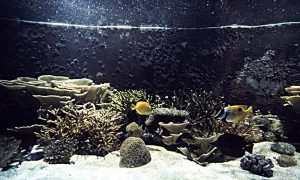 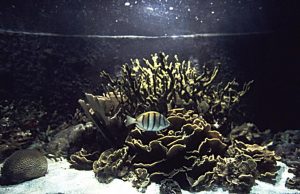 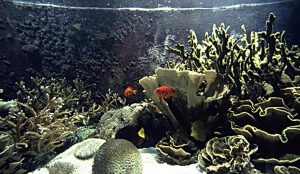 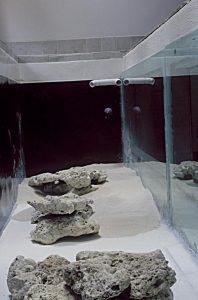 I wanted a large tank, but I also wanted one that I could work on without too much difficulty. My 300 gallon tank was traditional in construction. The glass tank was two feet tall sitting on a three foot stand. The overall height with light hood made it difficult to reach all parts of the tank. In addition, the tank was best viewed standing up. In a seated position, one had to look up at the tank – not the best angle for viewing. I decided to build my new tank on the floor with the sump area beside the tank rather than below it. This offered several advantages. At four feet in height, the tank can be viewed from above. The tank is roughly four feet from front to back, so using long handled grabbers I can reach any part of the tank. This makes the tank easier than my 300 gallon tank to work on. Despite it’s size, I rarely have to get in the tank to work on it.

Panoramic view of the entire tank.

The tank is concrete with two viewing windows. Each viewing window is roughly eight feet across. While it would have been possible to create a single larger viewing window, I chose two windows because a person’s normal field of vision is about 50 degrees arc, so at the distance one views my tank he or she can’t see much more than six feet of the tank anyway. Two viewing windows enabled me to create the impression of two differently aquascaped tanks. Structurally, it also had its advantages. The center support pillar allows a thinner rebar enforced front wall tied to the rest of the tank only at the sides.

Considering its size, the components of the tank are rather ordinary only larger. Circulation is generated by two 1HP Dolphin pumps in closed loops. I’m currently experimenting with eductors to increase flow. Modest protein skimming is generated by two MTC Power-Pros. A small quantity of ESV carbon is used from time to time.

Calcium replacement has proved to be a challenge due to the rapid growth of corals. Kalkwasser dosed through a Deltek reactor combined with a Knop calcium reactor and constant dosing with ESV B-Ionic is required to prevent a decline in calcium levels. Future plans include a large Deltek calcium reactor.

Over the years I’ve found that large water changes with properly aged artificial seawater have provided long term stability in the chemistry of my reef tanks. I normally do a 10% water change each month, mixing up a bucket of Instant Ocean in five 44 gallon Rubbermaid trash cans.

A small closet to one side of the tank houses the equipment, a sump, and a 60 gallon refugium that sits atop the sump. The refugium serves as a combination holding and experimental tank if I’m working on a special project. Eight separate electrical circuits allow the equipment to be distributed across multiple circuit breakers. This way, if a circuit breaker shuts off, it doesn’t affect the entire system. Plumbing is mostly schedule 80 pvc. Extensive use of true-unions and multiple pumps offer flexibility and the ability to switch systems if a component fails.

Lighting is a combination of natural sunlight and four industrial size pendants with Iwasaki 400 watt metal halide bulbs. During the summer months when the sun sweeps directly above the skylights, light in the tank approach natural reef levels throughout much of the tank. In the winter, the tank relies primarily on the metal halide lighting.

The average reef tank begins as a glass box packed with live rock and sand. It is not unusual to see the rock-work within an inch or two of the water’s surface. With enough rock cleverly aquascaped, one can create a dramatic looking reef tank with nothing else in it. The problem with this approach only becomes apparent over time. With a large portion of the tank’s volume consumed by rock and sand, there is comparatively little room for corals to grow and fish to swim. In a short time the tank can become packed with corals crowding each other and fish with little room to swim. If the tank becomes too crowded, tank conditions can deteriorate. If one wants a healthy tank that looks attractive years later, the tank needs to be aquascaped with plenty of open space.

Open space also makes the tank appear more realistic. Most of the stony corals maintained by hobbyists grow on low relief patch reefs with plenty of sunlight and turbulent water motion. I modeled my tank after a patch reef with large areas of sand and isolated patches of live rock, called bommies. This spartan look isn’t attractive at first, but over time the empty space is filled by growing corals. The tank’s inhabitants will grow and mature as they would on a natural reef.

There is a temptation in the hobby to take a “stamp collecting” approach to adding corals to the tank. The hobbyist accumulates one coral after another until every available space is occupied. There are several problems with this approach. First, over-crowding creates competition for space. Corals grow together and as they do, subtle but deadly warfare breaks out. It has been shown that competition for space creates stress and stress can impair the health of corals. A separate aesthetic problem of a tank over-stuffed with corals is that corals develop their characteristic shape over time. The small corals and cuttings we begin with rarely capture the full variety and diversity of coral shapes and colors. Corals become more spectacular as they grow, so it is better to have a small number of coral colonies with room to grow rather than a larger number of corals with no room to grow.

One of my goals in creating a large reef tank was to give corals room to grow to realistic sizes. For that reason, most of the corals found in the 2000 gallon tank are simply corals from my 300 gallon tank that have been given the additional space to continue growing. Tank capacity is a little less than 400 cubic feet, but my goal is to have fewer than one hundred coral colonies. My largest corals are approaching five cubic feet. At the rate at which they are growing, my largest colonies will reach the surface of the water in less than one year, and these corals rest on the bottom of the tank.

Another reason for growing large corals is to facilitate sexual reproduction. Hobbyists have had limited success in observing captive sexual reproduction. This has generated a great deal of speculation about possible causes including heavy metal accumulation. While there are a number of possible environmental explanations, the most likely explanation is that most hobbyists have “young” corals. Corals are rarely given the opportunity to reach maturity in captivity. During my observation of mass spawning events around the world, the one consistency has been that large colonies spawn and small ones don’t. There’s no reason to think that colonies in captive systems would behave any differently.

So far my success has been limited to “brooding” corals. Pocillopora damicornis broods planulae and releases them into the water column. I currently have approximately twenty colonies of P. damicornis growing on the back wall of the tank, with the largest nearly six inches across. These colonies all grew from planulae, probably released by a colony more than a foot across.

Studies of natural reefs have shown that algae overgrowth is primarily a function of the absence of herbivores. My tanks have always had a high proportion of herbivore fish, and I’ve been fortunate to have never had a serious algae problem. The “clean-up crew” includes five Zebrasoma tangs including a pair of Yellow tangs ( Z. Flavenscens ), as well as Purple ( Z. Xanthurum ), Black, and Scopas tangs. I also have a Yelloweye surgeonfish ( Ctenochaetus strigosus ) and a pair of Convict surgionfish ( Acanthurus triostegus ). The odd couple of the tank are a pair of Siganus rabbitfish, one S. unimaculatus the other S. doliatus that are inseparable. The Rabbitfish, Yelloweye, and Scopus were added shortly after the new tank was started, but the other fish were moved from the 300 gallon tank. Those fish I’ve had for five to eight years. Other fish include a Copperband butterflyfish ( Chelmon rostratus ), Neon gobies, psedochromis, Banggai cardinalfish, a Bluespotted jawfish ( Opistognathus rosenblatti ), a pair of Flame pygmy angelfish ( Centropyge loriculus ), Chrysiptera Damselfish, and a half dozen Bartlett’s Anthias.

Invertebrates also serve a useful purpose in controlling algae in my tank. A conch can consume large quantities of algae in short order – the problem is their size. While the animals sold in the hobby are small and manageable in the average reef tank, they grow quickly. I inherited two large Queen Conchs ( Strombus gigas ) from hobbyists when they became too large for their tanks. Other useful organisms in the tank include Lysmata cleaner shrimp, a few blue legged hermits, and thousands of polychaetes. Like most beginning hobbyists I assiduously removed every bristle worm I found in my earlier tanks, but I’ve developed a respect for their value in a reef tank. I now raise polychaetes in a separate tank to help maintain a high density in the main tank. Recently the polychaetes created my first observed mass spawning event when hundreds released egg bundles into the water column one evening. I had photographed mass spawnings of polychaetes in the wild, but this was my fist observed event in a reef tank.

While the tank is approaching nearly three years of development, I consider the tank still quite young. Cryptic sponges are only now reaching reasonable sizes. Most corals have now encrusted the adjacent live rock, so I expect growth to accelerate. In a reef tank, only bad things happen quickly; Good things take time as inhabitants adjust and adapt to their surroundings.