Note: Additional photos can be found in this article’s photo album. In addition, this article is also available in French.

Let me introduce myself: I am Thomas Demeulemeester aka ThomasD on the web with my website www.recif.be. I am also president and founder member of our fish club: www.tournaiverslerecif.be. 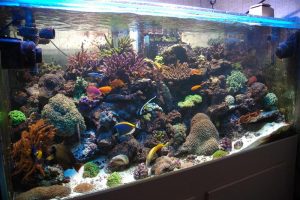 As far as I can remember, I have always been in the hobby in some manners. My parents had a small goldfish aquarium and above all, my grand father had a huge pond full of koïs. As a youngster, I was always overjoyed to feed them each time I visit him.

Our goldfish aquarium turned quickly to an aquarium with guppies, neon fish and plants so, a « true » freshwater aquarium. Then it turned to a cichlid tank with Meeki. And in summer 2000, it became my quarantine tank as I began saltwater with the help of a big local fish store called Le poisson d’or, which is now our sponsor for our club. This first saltwater tank was 300 L (80 US Gallons). It enabled me to understand the mechanics of a reef aquarium. Very soon, it became crowded as the various corals began to grow. This made all of my friends very happy as they received frags and myself as well, as I received more specimens in exchange. 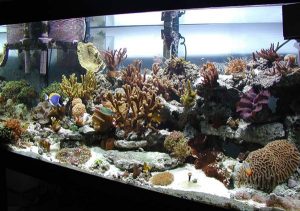 The 300 L was a true success for me and my wife Julie, so it was time to go for something bigger. So I order from a local aquarium manufacturer a new tank with dimensions more to my liking: 1m50 x 70cm x 70cm (60″ X 28″ X 28″) so a capacity of around 800 L (210 US Gallons). Going from the 300 L to 800 L was quite easy as I already had all of the equipment and room enough to let the two aquariums run at the same time. What was not so easy was to get the tank at the second floor through the staircase (and back again when I moved two years later). 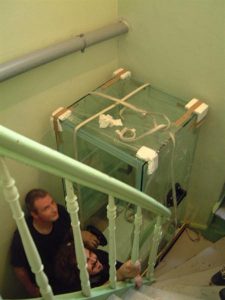 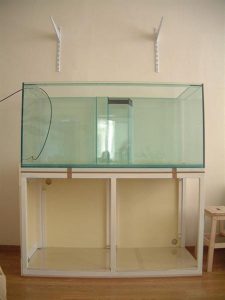 The tank is as wide as high which give me a pleasant perspective though wider would have been better. It is built from 12 mm glass with a glass reinforcement belt on top and bottom. It is designed with a central service compartment on the back glass. This compartment has a trapezoidal shape in order not to disturb the water flow. It is divided into a wet side with the water overflow with two 32mm PVC tubing and a dry side with the return from the sump and a few wires.

Live rock, being one of the “four pillars” of a reef tank, I took 170 kg (375 Lbs) of live rock – a part of them from former tank. These are stacked on an optical diffusion grid and I placed the return flow from the sump under the grid. This is an easy but effective way to treat sedimentation.

The other three “pillars” being skimming, lightning and water circulation here is the equipment I chose:

Skimmer is an H&S 200-2×1260 with two Eheim pumps using needle wheels and is rated for two times the volume of my tank, so I have a good margin.

Water circulation is done with three 4002 and two Stream 6100 tunze pumps driven by a multi-controller of the same brand. 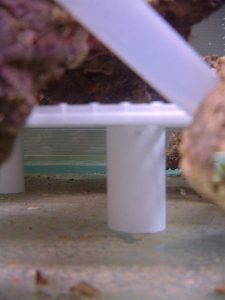 Lightning is inverted from true day light in order to spare some money as electricity consumption is cheaper during the night in Belgium. I use a Giesmann light system with two 250W MH, blue tubes and moonlight. This is 30 cm (1 foot) from the surface, so I completed the system with an HO Narva blue and a blue tube (Osram 67). The metal halides are from Hit-lite. I will soon change them for 400w bulbs.

All other equipment is located under the main tank and hidden by a homemade piece of furniture:

All plugs are connected to an electrical panel with 3 circuit breakers, a 30 mA ground differential and a protection against surge.

The main tank is connected to two other tanks, one with 3 Entacmea quadricolor anemones, one Periclimenes shrimp and a porcelain crab and a pair of occelaris clown laying regularly. 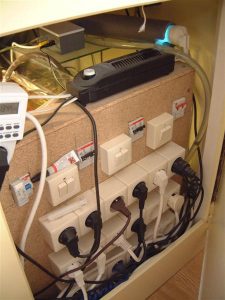 The other tank contains mangrove trees.

The tank is well populated but the skimmer, the live rock and a few water changes keeps the tank healthy.

You will notice the change in colour from the olive which took place in 2 month time. The move was certainly the primary cause of this transformation. There are a total of 20 fishes, a number of them being of fair size. The oldest I have had since the beginning and the younger is one and a half years. Having an oversized skimmer allows me to feed them a lot: 3 cubes of artemias, 1 cube of krill, homemade food (following receipt from the net) and pellets of formula one and two from Ocean Nutrition. Food not eaten by fishes is recirculated by the pumps or eaten by the 5 brittle stars. 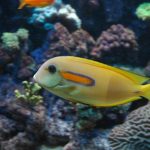 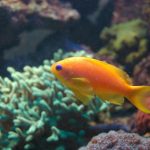 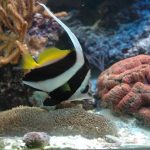 I have the luck to have diverse snail reproduction. Each breed of snail has its function, for instance cleaning glasses, cleaning sand, cleaning stones…

Very few of my corals come from stores. I prefer to exchange or to buy frags from people (see my trips in Germany and our visit to coral farms in Belgium). My tank is 70% SPS and 25% LPS, the rest is mainly actinodiscus, zoanthus and 2 soft corals. 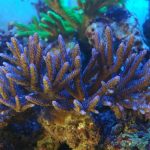 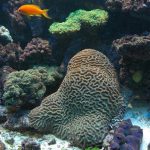 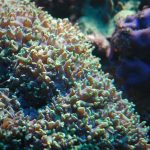 And a few I forgot….

I perform a 10% water change on a monthly basis. This seems to be sufficient to maintain the oligo-element balance and to get rid of what the skimmer has not disposed of. In this way, I am sure not to have an overdose of certain oligo-elements which would then accumulate in the water. Calcium, magnesium, strontium and other element addition are performed by a calcium reactor filled with lumps of coral skeletons and magnesium pro. In order to minimise the pH impact of this reactor and in order to add even more calcium, I also use a Nielsen reactor which adds 2.5 litres of Kalkwasser at different times during the day.

And the big secret for the success is “Keep your hands off”.